Analysis: Texas could find itself back in the voting rights penalty box
The federal judges who said the state's congressional maps are invalid last week are in position to take another step — to require Texas to get federal permission whenever it wants to change election and voting laws.

Texas proposal would limit prosecutors in grand jury proceedings
Grand jury reform legislation would allow suspects' attorneys to be present during questioning and would prevent prosecutors from going to another grand jury if the first one declines to indict – unless there's new evidence.

Texas executes Fort Worth man who killed a father and an infant
The state carried out its fourth execution of the year, putting to death 61-year-old James Bigby. He was convicted in the 1987 murders of his friend and a 4-month-old during a killing spree in Fort Worth.

At Capitol, bill targeting plastic bag bans draws strong opposition
Ranchers, city officials and environmentalists testified on Tuesday against a bill that would prevent cities from banning plastic grocery bags or charging a fee for them.

Senate panel considers bills that would draw Uber and Lyft back to Austin
A Senate committee heard testimony on three bills that would override local regulations concerning ride-hailing companies.

Bill that would overturn local bag bans draws strong opposition
Opponents of legislation that would prevent cities from banning the free use of single-use bags said this measure would harm Texas livestock, marine life and cotton gins.

Senators grill one another in tense hearing on property tax bill
State Sen. Paul Bettencourt's attempt to limit when cities and counties can increase property tax collections without an election drew bipartisan opposition Tuesday. But many supporters also came to the bill's defense.

Will and Beto drive to D.C.: top things we learned from the congressional road trip
U.S. Reps. Beto O'Rourke and Will Hurd talked policy and personal matters while live streaming a road trip to Washington on Tuesday.

The House State Affairs Committee is expected to take up legislation that would penalize local and state governments that don't cooperate with federal officials to enforce immigration laws — a move that would effectively ban sanctuary cities in Texas. 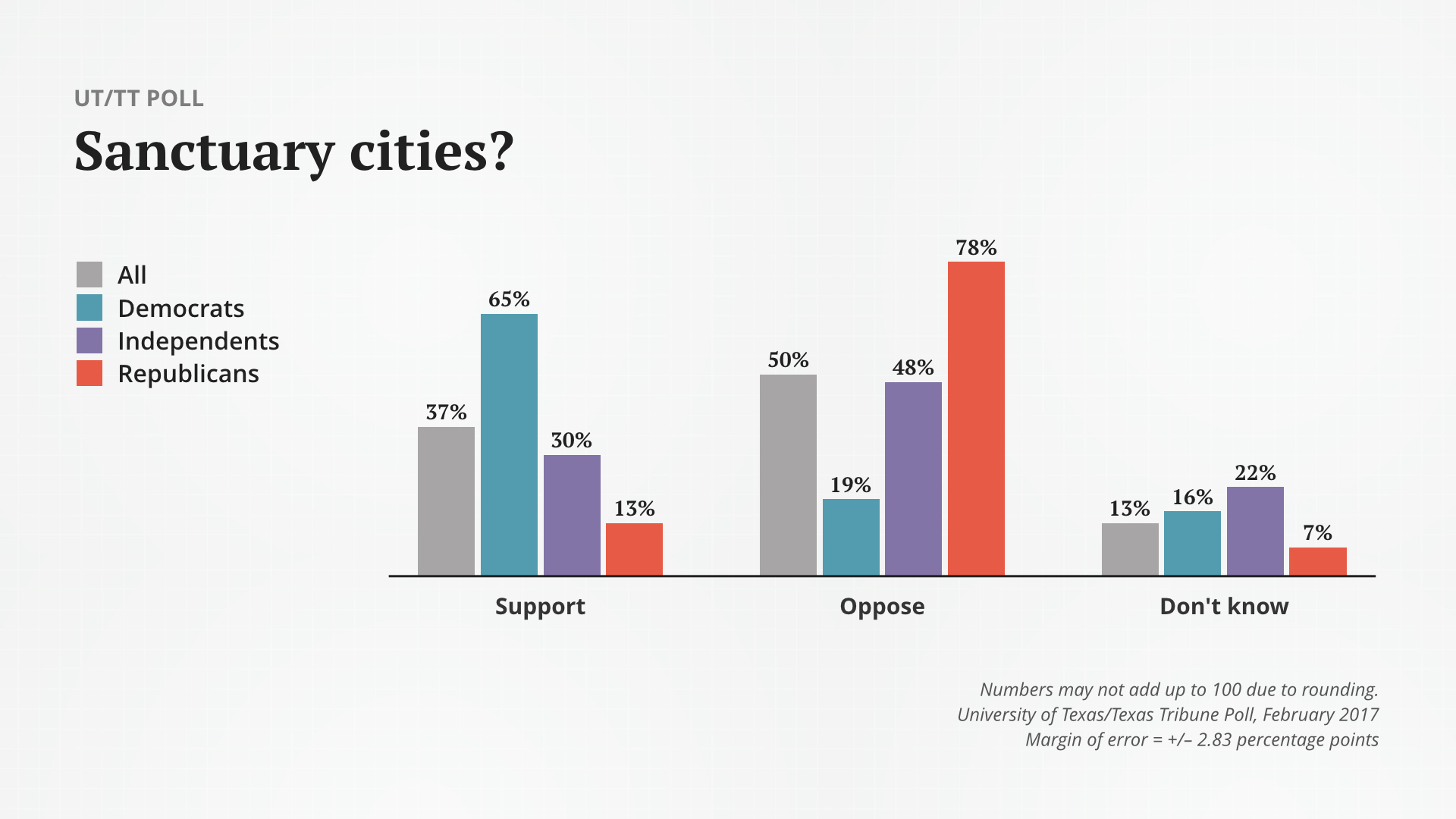 In the latest UT/Texas Tribune poll, 50 percent of Texans said they opposed "sanctuary cities," while 37 percent said they supported the practice.

Get by without Planned Parenthood? One Texas effort stumbles, The Associated Press 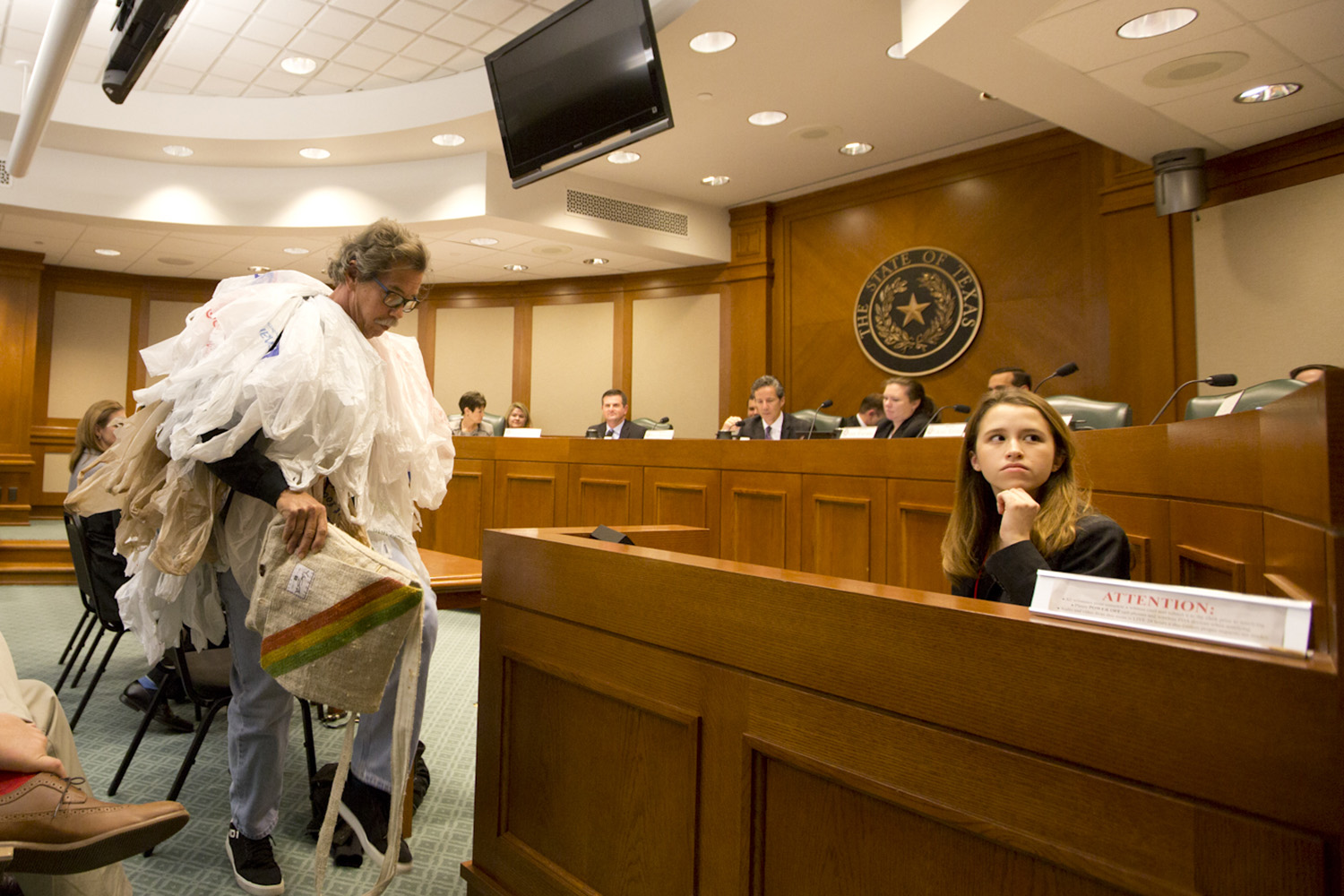 Joseph Seinsheimer, chairman of the Galveston chapter of the Surfrider Foundation, dressed up as a self-proclaimed “bag monster” as he testified Tuesday against legislation that would prevent cities from banning plastic bags. Photo by Marjorie Kamys Cotera. See more photos on our Instagram account.

"In a state with fewer than 20 clinics to serve more than 5.4 million women of reproductive age, we must address how abortion restrictions disproportionately affect low-income people, people of color, immigrants, young people and people from rural Texas communities. And yet, these same people are the ones most likely to be left out of the conversation."