Late appeals denied, man's execution set for murder he says he didn't commit
A man who claims he is innocent is set to be executed Thursday evening in a robbery turned double murder in Dallas County.

U.S. Rep. Kevin Brady is in the perfect spot to reshape the American economy
Kevin Brady, an eleven-term congressman from the Woodlands, is at the center of the biggest political debates unfolding in Washington, D.C., right now as chairman of the U.S. House's pivotal Ways and Means Committee.

Texas university leaders warn of dire consequences if Senate budget is implemented
In a day-long hearing, university presidents and chancellors said their schools might have to lay off faculty and cut classes if hundreds of millions of dollars worth of "special items" aren't put back in the budget.

Texas Senate's ethics reform plan unveiled, targets revolving door
Sen. Van Taylor, R-Plano, unveiled his ethics reform plan on Wednesday. Lt. Gov. Dan Patrick, the Republican Senate leader, was on hand for the unveiling and announced that there were enough votes to pass the proposal out of the 31-member chamber.

State Rep. Kyle Biedermann, R-New Braunfels, is holding a "homeland security summit" this morning at the Capitol "to thoroughly understand the critical threat of radical Islamic terrorism in Texas.” But a controversial survey the lawmaker sent out to "Islamic Leaders" polling their beliefs may overshadow the event.

House Science Committee chairman: Americans should get news from Trump, not media, The Washington Post ($)

Muslims and supporters call for understanding in 'friendship, not suspicion', The Dallas Morning News ($)

This morning, The Texas Tribune will moderate a conversation on mental health with State Reps. Joe Moody and Four Price. Watch online. 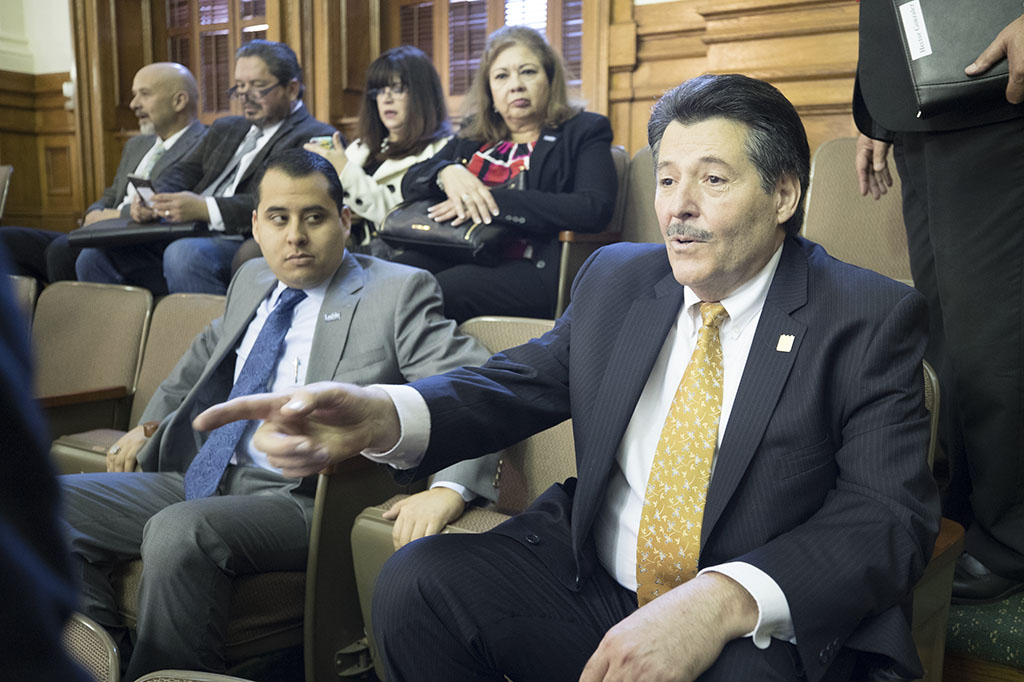 Laredo Mayor Pete Saenz watches House proceedings from the public gallery at the Capitol on Wednesday morning. Saenz is concerned about President Donald Trump's efforts to build a border wall near the city of Laredo. Photo by Bob Daemmrich for the Texas Tribune. See more photos on our Instagram account.

"If we continue to deny the problem, we will never be able to marshal the energy and resources needed to create a solution. Without an A-F system like this, we won’t know if more money in the system is actually making a difference."