All lanky limbs and wavy chestnut-colored hair, he’s easy to pick out of a room by his infectious laughter and toothy grin.

His favorite food is mac and cheese — really any kind of pasta dish — and he loves to play outside. He wants to be a scientist when he grows up, but he’s also interested in gymnastics. His favorite color is blue.

He’s a massive fan of American Ninja Warrior, an obstacle competition show. He has a pet hamster named Princess and two sweet dogs named Pepper and Maple. And his room is a shrine to Minecraft, stuffed animals, Pokemon figures and his martial arts medals.

Most people don’t realize he is transgender. And that’s kind of the point, his mother Ann Elder often repeats.

In this largely conservative, suburban Houston enclave of subdivisions with perfectly manicured front lawns, Ben’s ordinary personal preferences are, in a way, small victories for a family striving for a sense of normalcy. The Elders talk about which sports Ben wants to try out this summer and what university he’d like to attend.

Against these priorities, it seems odd to Ben's family that Texas Republican politicians are devoting so much effort to the question of where their 10-year-old should go to the bathroom.

Jim and Ann Elder met their only child in 2006 when they took in a weeks-old baby girl through the state’s foster care system. They loved on their little one, and after 18 months adoption papers were signed and the Elders officially became a family of three.

As the baby grew, the child began taking on names commonly used for boys during playtime and displayed “male role modeling,” Ann Elder said in a recent interview. As she tells it, it was at a five-year-old check-up that she mentioned the “weird behaviors” to their pediatrician.

Their pediatrician recommended visiting with a child psychologist who, after a three-hour evaluation, determined the child was gender variant. The psychologist explained it could be a phase or the child could later affirm a male identity — either way, she recommended that Ann support him by letting him play and dress as he wanted. 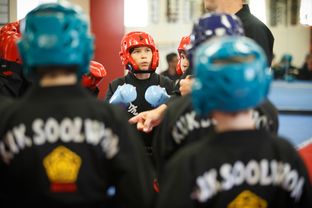 Enlargephoto by: Michael Stravato for The Texas Tribune
Benjamin Elder in his martial arts class in Clear Lake.

A trip to Target followed that evaluation, where Ann bought her child clothes and underwear from the boys’ department. When they got home, Ben changed into his “boy underwear” and immediately “burst with joy and happiness.”

“I realized the poor kid had been stifling himself for the whole time I knew him because he was trying so hard to be a girl,” she said. “I kind of broke down and realized, my poor kid, he’s been trying so hard, and this is who he really is.'”

By the time he was 6 and getting ready for first grade, Ben was “presenting as a boy 99.9 percent of the time,” Ann says. Relief washed over her when the school counselor at Landolt Elementary agreed that Ben “would be treated like he wanted to be treated” and the school would call him by whatever name he wanted.

“So that’s when he decided he wanted to go by Ben full-time,” Ann said.

But Ben’s transition didn't move forward without challenges, and some resistance.

Some of the Elders’ neighbors who met him "as a girl” weren’t as accepting, Ann said. One family didn’t acknowledge the Elders for about two years. Others didn’t allow their kids to play with Ben. Another neighbor went to Ben’s school and raised concerns about his transition to a teacher.

“And they didn’t know that the counselor and principal were totally fine with it,” Ben interjects, before his mother continues recounting how negative reactions from her neighbors’ further enforced her fears for his safety.

“That’s been disheartening and kind of hard because when the world is against your kid, I feel very vulnerable and I worry about him a lot,” Ann Elder said, her voice dropping an octave. “I mean it’s not like he’s a monster or has done anything wrong. He was just born.”

While his parents are his biggest cheerleaders and confidants today, things weren’t always as simple.

When Ben turned 7, the child psychologist formally determined Ben was transgender. But it would be another year before Ben’s dad would get “on board,” Ann explains as her husband Jim, a soft-spoken chemical engineer with salt-and-pepper hair, listens on.

It was a statistic about the tragically high rates of suicide among transgender kids that turned him around. “It was a learning process,” Jim says while watching Ben's Kuk Sool Won class, a Korean type of martial arts in which Ben is attempting to become a black belt.

“I mean it’s not like he’s a monster or has done anything wrong. He was just born.”— Ann Elder, Ben's mom

Later that evening, Jim would beam at Ben watching his son hang upside down from the monkey bars of a large wooden playground in their backyard. “We're lucky,” he’d say quietly, putting his hands in the pockets of his tan, pleated pants. “We’re very lucky.”

Ben’s elementary school worked to accommodate him by allowing him to use a bathroom in the nurse’s office. But that became a problem when other kids started questioning why Ben would disappear there to use the bathroom, Ann Elder says. 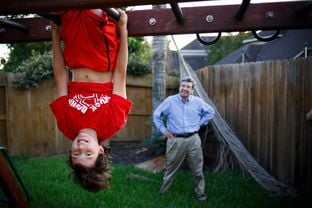 Enlargephoto by: Michael Stravato for The Texas Tribune
Benjamin Elder, who is obsessed with the television show American Ninja Warrior, working on his backyard jungle gym with his father, Jim Elder.

He then stopped using the bathroom at school altogether and would “hold it in” for the entire school day, she says. Eventually, the school decided to let him to use the boys’ bathroom. It was a simple fix, and didn't require the involvement or blessing of Texas Republican officials who have lately taken great interest in passing a state law that would require children like Ben to use the bathroom that corresponds with the gender on their birth certificate.

“We have been successful in balancing the rights of all students without issue and offer restrooms, showers and changing areas for students seeking privacy, regardless of their gender or gender identity,” she added.

Last month, the Obama administration issued a sweeping directive instructing all public school districts to allow transgender students to use bathrooms in line with their gender identity. The guidelines state transgender students have the right to use their preferred bathrooms in public schools because of Title IX, a federal statute that prohibits discrimination on the basis of gender at educational institutions that receive federal funding. It does not have the force of law, though school districts could risk losing federal money if they do not comply.

Many school districts in Texas already accommodate transgender students — both through formal policies and in practice — but Texas Republicans were overcome with indignation over the guidelines.

“For the kids, it’s not a matter of what’s on the bathroom door.”— Robbie Sharp, developmental psychologist and gender therapist

Texas, joined by 10 other states, quickly filed suit against the federal government, with Attorney General Ken Paxton claiming the guidelines were “outside the bounds of the Constitution.” Lt. Gov. Dan Patrick announced that he would send his own letter to schools instructing them to ignore the Obama guidelines, and he later indicated that state lawmakers could also step into the fight.

This hasn't caused Ann Elder to shy away from advocating for her son. She was recently part of a group of parents of transgender children who spoke at a press conference at the Texas Capitol against Texas Republicans' bathroom fight. Holding up a picture of Ben wearing a blue button-up shirt, she said 10-year-old girls "do not want to see my son in the bathroom."

But the fight brewing over bathrooms hasn’t appeared to alter Ben’s accommodations at school. He’s more concerned about being able to run on the middle school track team.

While Ben is a rising 5th grader, he’s already looking forward to joining the 6th grade boys track team. But a rule adopted in February by the legislative council of the University Interscholastic League, the governing body for athletics in public Texas schools, indicates that a student athlete’s gender is determined by what’s listed on their birth certificate.

The gender marker on Ben’s medical and school records has been changed from female to male, but his birth certificate hasn’t been amended.

So far, using the boys' bathroom hasn’t been an issue for Ben, who says “there’s nothing different” about being a transgender boy versus a non-transgender boy. And he’s fairly sure his friends are okay with it.

“I think they know, but I think their parents probably told them not to talk about it at school,” Ben says from the back seat of his mom’s SUV.

If you ask him to tell you about himself, Ben doesn’t focus on his gender identity.

“I got the highest score in my class on my science benchmark — a 91,” Ben says while pouring honey on a toasted roll at Panera, a family tradition after martial arts class. 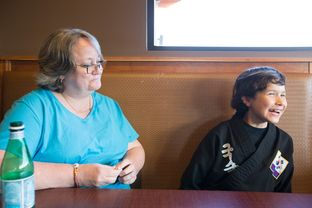 Enlargephoto by: Michael Stravato for The Texas Tribune
Benjamin Elder with his mom, Ann Elder.

He’s a smart kid, boasting straight As in his classes. He knows the difference between realistic fiction and historical fiction. Two of his favorite teachers teach science and math. The third favorite is Mr. Wood because he was his “first boy teacher.”

He only talks about meeting President Obama and Vice President Joe Biden after his mom mentions they attended an LGBT Pride reception at the White House last year, covering his face when she retells an embarrassing story of him from the event.

Despite the fight over which bathroom transgender kids can use, Ben's doing just fine. A lot of other transgender kids have fears about even using the bathrooms in school, said Robbie Sharp, a Houston developmental psychologist and Ben’s gender therapist.

Ben, in the meantime, breaks into laughter when he thinks about bathrooms. He struggles to get through his giggles while recounting a story about his best friend accidentally using the girls’ bathroom once.

In addressing the push against transgender-inclusive bathroom policies, he responds just like any other 10-year-old might address a serious issue — with short answers and humor.

“So Ben, what do you think about the Texas [lieutenant] governor wanting to make you use the girls’ bathroom?” his mother asks on the drive back home from dinner.

“If you could talk to him, what would you say?” she follows up.

He’s pensive for a few seconds before his lips slip into a sly smirk and he prepares to address the non-present lieutenant governor. “You’re mean!” he says loudly. Then he erupts into a fit of giggles.