FORT WORTH — Lt. Gov. Dan Patrick renewed his call Tuesday for the Fort Worth schools superintendent to resign after approving a bathroom policy to accommodate transgender students. But supporters of district chief Kent Scribner, and the policy, called Patrick a bully exploiting "fake outrage" to score political points.

Speaking at a news conference in Fort Worth ahead of a district school board meeting, Patrick said Scribner had overstepped his role as CEO of the state's sixth-largest school district, and that he traveled here to explain exactly why he was calling for his resignation.

Not only did Scribner break state law and policy in setting the guidelines, but "he's not focused on the real issue," Patrick said at the Fort Worth schools administrative complex, where hundreds of transgender advocates and protesters congregated Tuesday.

The Republican said Scribner should focus on improving the district's failing schools, rather than "social engineering." 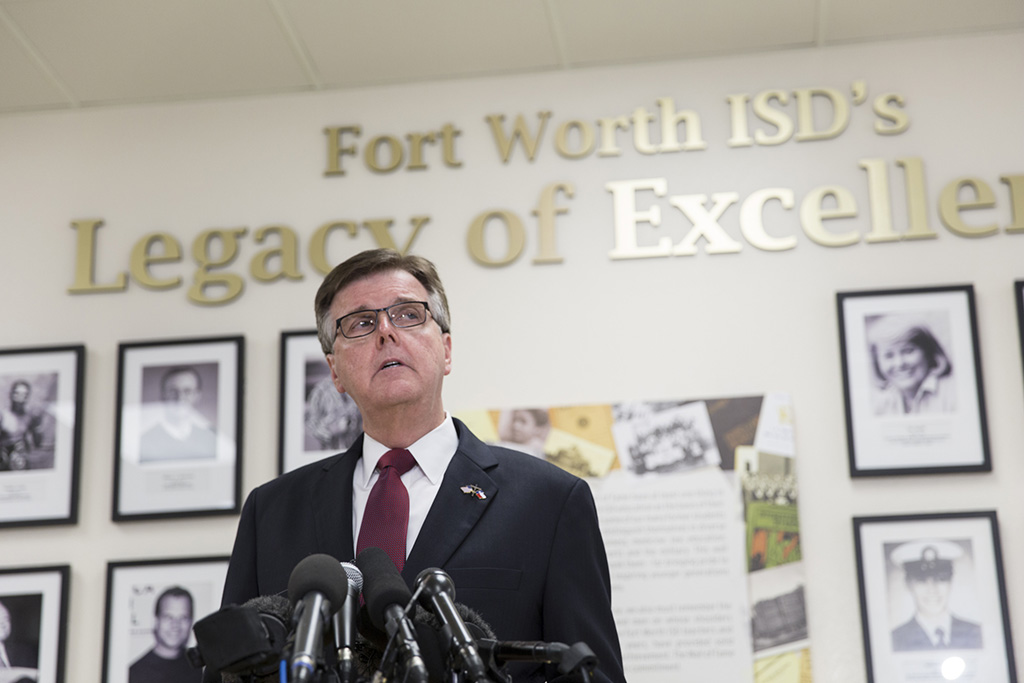 In a pre-emptive press conference held before Patrick spoke, supporters of the district's transgender bathroom policy also lobbed accusations of misplaced priorities, accusing Patrick of making something out of nothing. They derided Patrick for what they described as his “fake outrage,” calling him a shameless bully."This policy does nothing to improve a student's chances of graduating," he said.

“There is no news here,” said Steve Rudner, chairman of Equality Texas. “The only news here is that the lieutenant governor has decided to pick on an already bullied group of kids. It’s shameful and it’s despicable."

The dueling news conferences were held in advance of a school board meeting where the new guidelines were not on the agenda but were addressed during a packed and rowdy hourlong public comment period. Supporters of the new guidelines thanked Scribner and the board for protecting transgender students while opponents expressed outrage that the board did not take public comment on them. They also called on Scribner or the board to repeal the guidelines and start over, with some echoing Patrick's call for the superintendent to step down.

“I don’t understand why these rules were implemented behind closed doors without a vote from the board,” said Nicole Hudgens, a policy analyst with the conservative group Texas Values. “Why is there an attempt to break up the family here? Because that is what you’re doing.”

Dallas resident Paula Ellis, a 53-year-old transgender woman, meanwhile, told the board she avoided using the bathroom while in school, describing it as “painful and difficult.”

“Thank you for your efforts to ensure that all of our kids are safe,” Rev. David Winn said, urging opponents to “remember that Jesus spent the majority of his time with outcasts.”

Scribner announced the now-controversial bathroom policy at the school board’s April 19 meeting, where there was no related discussion, according to a Fort Worth Star-Telegram report. The board was not asked to vote on the policy because it is an “administrative guideline,” which is a policy that superintendents can implement without official board approval.

The issue blew up for the first time this week as conservative groups learned of the new policy and called for concerned parents and other opponents to swamp the board’s next meeting to protest.

Earlier Tuesday, Scribner said he will not heed Patrick's request for his resignation over the new rules.

"I’m proud of these guidelines," Scribner told the Fort Worth Star-Telegram editorial board Tuesday. “I think they provide educators with the ability to make all students more comfortable and confident in a learning environment."

The guidelines specify that schools must ensure students feel safe in their restrooms. If a student is uncomfortable using the bathroom with a transgender peer, the school must let the student use a single-stall restroom, a gender-neutral bathroom or a restroom where no one else is present.

On Monday before scheduling the Fort Worth news conference, Patrick said the policy puts students in danger and Scribner should not have acted without "any discussion with parents, board members, principals, and other community leaders."

"Campus safety should be of paramount concern for anyone in his position," Patrick said in a statement. "Every parent, especially those of young girls, should be outraged."

“I have strong concern that this policy violates provisions in the Texas Education Code that give parents an unequivocal right to information regarding their children and is motivated by a misguided view of federal law,” Paxton told Ramos in a letter. “I sincerely hope you will assess these deficiencies in the transgender policy and more as the board deliberates.”

When asked Tuesday about Scribner's plans to stay, district spokesman Clint Bond confirmed the superintendent's intentions to remain in his post. Bond also provided a statement from Ramos.

"Rest assured, the safety of ALL children is our highest priority on the Board," Ramos said in the statement. "We are completely capable of handling this in Fort Worth. We are applying the existing policy to make sure ALL children feel safe at school. We are here to look out for ALL children; not some, not most, but ALL children."

Two other school board trustees said Tuesday they were surprised the issue had escalated like it had, noting Scribner had been discussing it with them for months and that it stemmed from a non-discrimination policy updated in 2011. 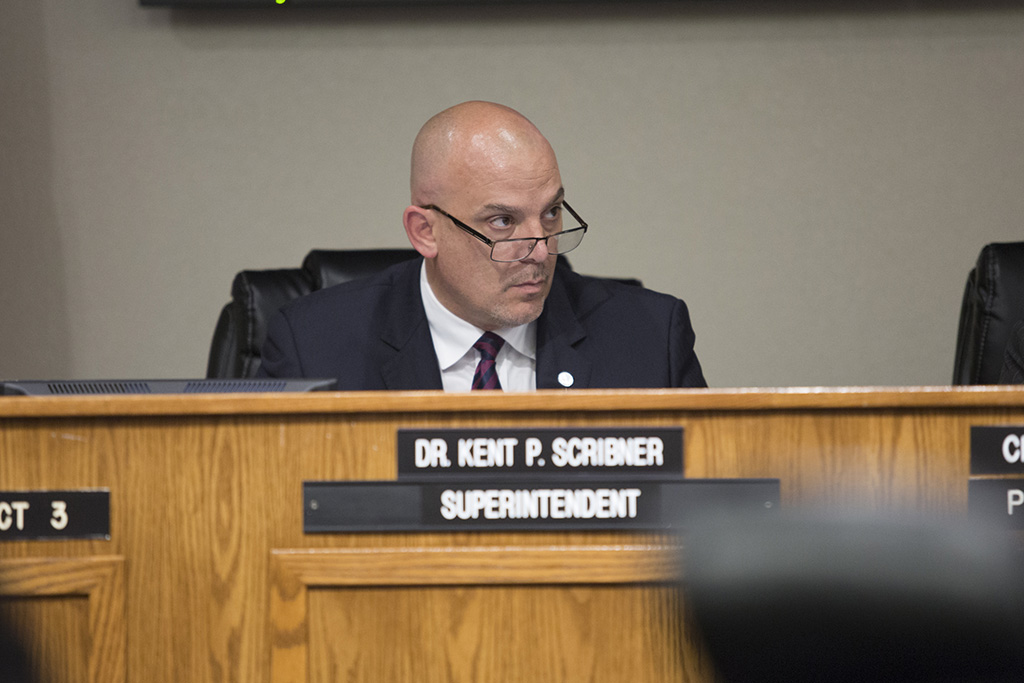 Enlarge Photo by: Laura Buckman
Fort Worth ISD Superintendent Kent Scribner listens to speakers at a school board meeting on Tuesday, May 10, 2016.

That policy was updated again in 2012 to add protections against gender-based harassment, Scribner told meeting attendees Tuesday before the board took public comment.

“This policy is nothing new,” he said, reiterating his support for the rules. “I am proud of the guidelines that we’ve developed and I’m proud that we’re able to support this policy to provide our educators with a framework to make all students — all students, whether they are transgender or not … comfortable and confident in the learning environment.”

“Rest assured, the safety of ALL children is our highest priority on the Board.”— Jacinto "Cinto" Ramos, Fort Worth school board president

Patrick's call for Scribner's resignation comes during an increasingly tense battle over rights of transgender people across the country. North Carolina and the U.S. Department of Justice sparred over the state's House Bill 2, which would prohibit people from using public restrooms that do not align with their biological sex. Patrick and other conservative leaders have pledged to pursue a similar law during next year's legislative session in Texas.

At least four of the five Texas school districts that enrolled more students than Fort Worth last school year don’t have specific rules on the books dictating how to handle bathroom use by transgender students, according to spokespeople in the Dallas, Cy-Fair, Northside and Austin districts. (A spokesman for the Houston Independent School District, the largest in the state, did not immediately respond to a request for information on its rules.)

Nicole Ray, a spokeswoman for the Cy-Fair school district, the state’s third largest, said the district handles the issue on a case-by-case basis because “it may not be the same with every child.”

“We try to work with them individually to meet their needs and what they’re comfortable with and we find that’s really been the best way to find that everyone’s needs are met,” she said.

El Paso Superintendent Juan Cabrera said he began exploring the possibility of adopting such a policy last summer, when he directed school district lawyers to study current guidelines. For now, he said the district follows certain local and federal guidelines that say schools should accommodate the bathroom needs of transgender students however possible.

“We’re a very progressive city and progressive school district and we want to afford all of our children every right and accommodation that they deserve,” he said.

Asked if he would seek board approval for such a policy, Cabrera said it depends.

If it’s a matter of student safety, “I absolutely have the right to implement administrative regulations to make sure they all feel safe,” he said. “I’m not going to subject myself to political will if I think safety of the children” is at stake.