Texas Agriculture Commissioner Sid Miller strolled into a state office conference room on Tuesday, doffed his cowboy hat and quietly plopped into a chair, joining about 10 others around a wooden table. Three were his employees.

This wasn’t a typical meeting of state bureaucrats. That was clear minutes earlier when attendees joined hands in prayer beneath the room’s florescent lights.

“Satan has no foothold here. Your army is here,” said Stephanie Franklin, a self-defense teacher, trained chaplain and leader of this week’s “Faith at Work” session for Department of Agriculture employees and anyone else who wants to come. “We have to remember to get refreshed in God’s word.”

Even in Texas, where many elected officials talk openly about how Christian faith shapes their policymaking, some might hesitate to bring religion directly to agency practices. But Miller is not shy. Since naming Michael Tummillo, a friend from his hometown of Stephenville, as the agency’s official volunteer chaplain last summer, the Republican has reserved a place for Christianity in the Stephen F. Austin building and invited his employees to join.

Tummillo, who organizes the lunchtime gatherings, typically brings along a few other chaplains he has trained. His wears a navy blue trucker cap proclaiming "CHAPLAIN" in gold letters. A badge on his white dress shirt says the same. Last week’s meeting centered on attitude in the workplace. This time, attendees were encouraged to put themselves in others’ shoes, guided by Biblical teachings.

“It’s just another something that we can do for our employees to help them through their work environment here,” said Miller, who has quietly sat in at least two of the sessions.

Staffers who attend called the gatherings refreshing and a good time to reflect away from their desks. "I needed a boost," one said, explaining why she wandered in.

A few other Texas agencies employ non-denominational chaplains, but they tend to focus more on prison inmates or hospital patients than the state employees themselves.

In his unpaid position, Tummillo, who also leads a chaplaincy-training program called “The Church at Work," says he occasionally strolls around agency cubicles in case anyone needs to talk. “We’re not trying to convert anybody to anything. Just to be a better employee. That’s critical,” he said. Work “is where all the hurt is.”

Some who track religious liberties issues suggested that Miller, a Republican, should be careful in promoting a program with a decidedly Christian flavor and make sure not to pressure employees — directly or indirectly — to participate. 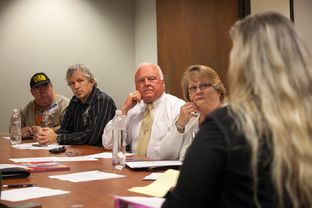 Enlargephoto by: Todd Wiseman
Texas Agriculture Commissioner Sid Miller looks on during a lunchtime "Faith at Work" session at the Stephen F. Austin state office building. Such weekly meetings are organized by Michael Tummillo, who Miller named the official volunteer chaplain at his Department of Agriculture.

“Religious freedom means freedom for everyone, not just the politicians who head the agency,” said Dan Quinn, a spokesman for the Texas Freedom Network, which describes itself as a watchdog of the religious right.

Lt. Gov. Dan Patrick, a Republican who frequently touts his Christian beliefs, would not comment specifically on Miller’s religious efforts. But he said in a written statement: “I support religious liberty and prayer 24/7 365 days a year. We need more prayer time in America not less.”

For his part, Miller said no state money is spent on the chaplaincy program, and the department has rolled it out carefully.

“We wanted to make sure that no one got the impression that it was a special deal you had to attend to get on the good side of the commissioner,” he said. “We have some Jewish employees, and I anticipate that some might want a rabbi. I’ve got one on call.” (That’s Rabbi Moshe Trepp, who helped Miller light a menorah in the agency headquarters last Hanukkah.)

And would Miller, who has been known to make controversial statements and social media postings about Islam, consider inviting an imam if a Muslim employee requested one? “I think I would,” he said, but quickly added: “I obviously don’t agree with Islam by any stretch of the imagination.”

Still, he added, “there are people hurting everywhere. If someone happens to be a different religion than mine, then I help them.” That would include tracking down an imam for anyone who asked. The motto of his organization, he notes, is “we push people, not religion.”

In some respects, Tummillo’s all-are-welcome attitude may reflect a change of heart over the years. The chaplain has published hundreds of online essays, and some from the early 2000s describe Islam as evil.

"At the very root of Islam is Satanic involvement," he wrote in a piece from 2002. “Typically, once a person yields to the Islamic spirit, they fall within the grasp of a very vengeful, hateful, demonic, Spirit of Death.” 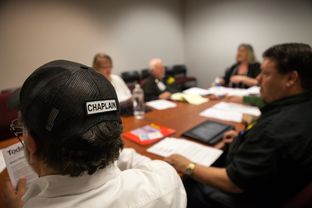 Enlargephoto by: Todd Wiseman
Michael Tummillo, the official volunteer chaplain at the Texas Department of Agriculture, wears his title on his trucker cap.

He regrets those writings. “I wish I could go back and take those down,” he said. “That’s how I felt 100 percent. I tell people, if you’ve read any of my articles from the past 10 years — throw them away and talk to me. Because God changes all the time.”

On his Facebook page last month, however, Tummillo shared a link to a blog claiming, “half of world’s Muslims are inbred due to generations of incest.”

“Wow,” he wrote, along with the headline. When a commenter questioned the post, he replied: "This is actually quite a problem."

Asked about that post, Tummillo noted, “I like to provoke thought in people.” He added: “I guess my attitude about those articles is: ‘Hey, look everybody – if this is true, maybe we should do something about that.’”

Miller said he was not aware of the chaplain’s writings. Tummillo was free to express his opinions, he said, and they weren’t creeping into his ministry. “After some of the things I’ve posted, I guess I better not criticize anybody," Miller said.

Miller’s early emails to his hundreds of employees promoting Tummillo’s visits show some level of caution.

The first came during the devastating Central Texas floods and storms in May 2015. Miller brought in Tummillo to offer prayers for victims and comfort to anyone who was scared or grieving. Many showed up, sparking the idea to make the chaplain a more frequent presence.

“If you feel the need to pray or reflect for yourself, your family, friends and for the flood and tornado victims across Texas – please feel free to attend,” Miller’s invitation to staff said. “This is strictly a voluntary event and open to all TDA Employees.”

An email the next month contains similar language.

By February of this year, the emails, signed by Tummillo but sent by Miller, had shifted in tone.

“Trust me, you already know SOMEBODY who needs exposure to this ministry," a recent invitation states. "Business owners, shift workers, job seekers, State Employees in the building ... ALL will benefit from what God is doing at the Capital in Austin.”

State Rep. Elliott Naishtat, an Austin Democrat who strongly supports a separation between church and state, suggested that Miller's program, at first glance, did not appear troubling. “But I’m always concerned about state actions that could be the beginning of a slippery slope toward more controversial actions,” said Naishtat, who is Jewish.

Five large Texas agencies carry a mix of paid and volunteer chaplains, who mostly administer to folks other than staffers.

Fifteen paid Department of State Health Services chaplains offer comfort to patients and families at hospitals and other facilities. They support staff only “in certain specific situations, such as if a staff member passes away and a memorial is requested,” said spokeswoman Carrie Williams.

At the Department of of Aging and Disability Services, paid chaplains at 11 state-supported living centers provide a variety of services — including grief counseling, hospital visits and officiating ceremonies — to residents, family and staff.

A Department of Public Safety chaplaincy program focuses mostly on workers. Its 40 volunteer chaplains span various religious faiths, and they sometimes assist troopers in the field.

Some local governments also look to chaplains, and one program recently sparked controversy. In late 2015, the state Commission on Judicial Conduct investigated a complaint filed against Wayne Mack, a Montgomery County justice of the peace and coroner, related to a volunteer-led chaplaincy program he organized.

The commission ultimately dismissed the complaint, according to Patrick, but issued a letter “strongly caution(ing him) against continuing,” the program and courtroom prayer services.

“It is my hope that an expeditious opinion by the Texas Attorney General will provide Judge Mack and all Texas Judges the clarity they deserve as to the constitutionality of these programs,” Patrick said in a statement.

No one bashed Islam or other non-Christian beliefs in the two “Faith at Work” gatherings that The Texas Tribune attended. Each discussion centered on harnessing faith to become a better worker.

“Yes, I’m working for the state, but also for Jesus,” one agency staffer said this month as buzz from the cafeteria across the hall trickled into the conference room.

Tamara Barbery, a customer service representative who works in the department's food and nutrition division, spoke of her personnel file “as thick as the yellow pages," showing occasional scuffles with her bosses.

“We’re going to fail,” she said. “We just need to turn and say, “Lord, what do you want me to learn from this?”

Barbery plans to retire in May after 18 years. She is the lone agency employee who Tummillo has trained as a chaplain and she has been volunteering at a nursing home in Bastrop.

“I had been seeking out a purpose,” she said. “This is what God has put me on earth to do.”