Don’t expect Texas Agriculture Commissioner Sid Miller to apologize over a social media post that appeared to call for the atomic bombing of “the Muslim world” – despite an outcry from critics.

Miller, who is currently on a trade mission to China, did not personally share a controversial photo that appeared on his campaign Facebook account and has since been removed, Todd Smith, the Republican's campaign spokesman, said Monday. The commissioner has no plans to figure out which of his staffers shared the posting, or to apologize, Smith said.

“We’re not going to apologize for the posts that show up on our Facebook page,” said Smith, estimating that 18 people have access to the campaign account. “I don’t know who did it, but I’m not going to start a witch hunt to find out who did.” 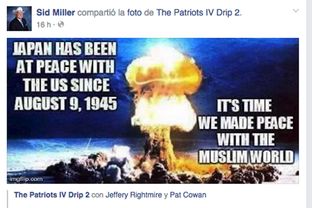 The photo, originally shared by the Facebook user The Patriots IV Drip 2, depicted a mushroom cloud framed by two statements: “Japan has been at peace with the US since August 9, 1945” and “It’s time we made peace with the Muslim world.”

On Aug. 9, 1945, the U.S. dropped its second atom bomb on Japan during World War II, killing tens of thousands of civilians in Nagaski and prompting Japan’s unconditional surrender. Commemorating the bombings this month, Shinzo Abe, Japan’s prime minister, called for an end to nuclear warfare.

Texas Democrats decried the posting as “hateful,” calling for an apology.

“It is unacceptable for Republican Sid Miller to be promoting such disgusting rhetoric. Sadly, this kind of racist, xenophobic hate speech qualifies you for higher office with Republicans’ Tea Party fringe base,” Manny Garcia, the state party’s deputy executive director, said in a statement Monday.

Though Miller did not personally post the photo, Smith said, the commissioner has not been afraid to publicly share his views about Muslims.

Shortly before he was sworn in, for instance, Miller appeared at a Texas Public Policy Foundation forum at which he was asked what keeps him up at night.

Miller replied: “I do have some long-range concerns as I hold those two grandbabies on my lap, and I happen to wonder: When they have grandbabies to hold in their lap, will we be a socialist country? Will we be a Muslim country?”

Smith said Monday that Miller was not advocating for any atomic bombings, even if the post was “thought-provoking.”

“I read the post this morning, and we’re at the 60th anniversary of dropping the atom bomb in order to destroy an insidious enemy that was intent on destroying American lives, and we face a similar enemy who has vowed to destroy American lives, and I think that’s the topic that the American people are focused on," Smith said.

Miller, a former state representative in his first year as commissioner, is currently on an 11-day trade mission in China, with stops in Beijing, Shanghai, Hangzhou and Lanzhou.

Disclosure: The Texas Public Policy Foundation is a corporate sponsor of The Texas Tribune. A complete list of Tribune donors and sponsors can be viewed here.