Three-quarters of the state’s voters think the government should require parents to have their children vaccinated against infectious diseases, according to the latest University of Texas/Texas Tribune Poll.

Only 14 percent said vaccinations should not be required; the rest did not register an opinion.

“This seems to validate the less dramatic and less sexy version — this is more about health care delivery and health care habits, and there doesn’t seem to be some broad ideology here,” said Jim Henson, co-director of the poll and head of the Texas Politics Project at UT-Austin.

The answers did vary from group to group. Among Tea Party Republicans, 28 percent said vaccinations should not be required, as did more than 17 percent of voters who said they attend church once a week or more. While 11 percent of women opposed vaccination requirements, 17 percent of men did so. And rural voters were more likely to oppose required vaccinations than their urban and suburban counterparts, according to the poll.

“It’s not like there are tons and tons of people out there who are against vaccinations, but to the extent there is resistance, it’s based on belief systems,” said Daron Shaw, a UT-Austin government professor and co-director of the poll. 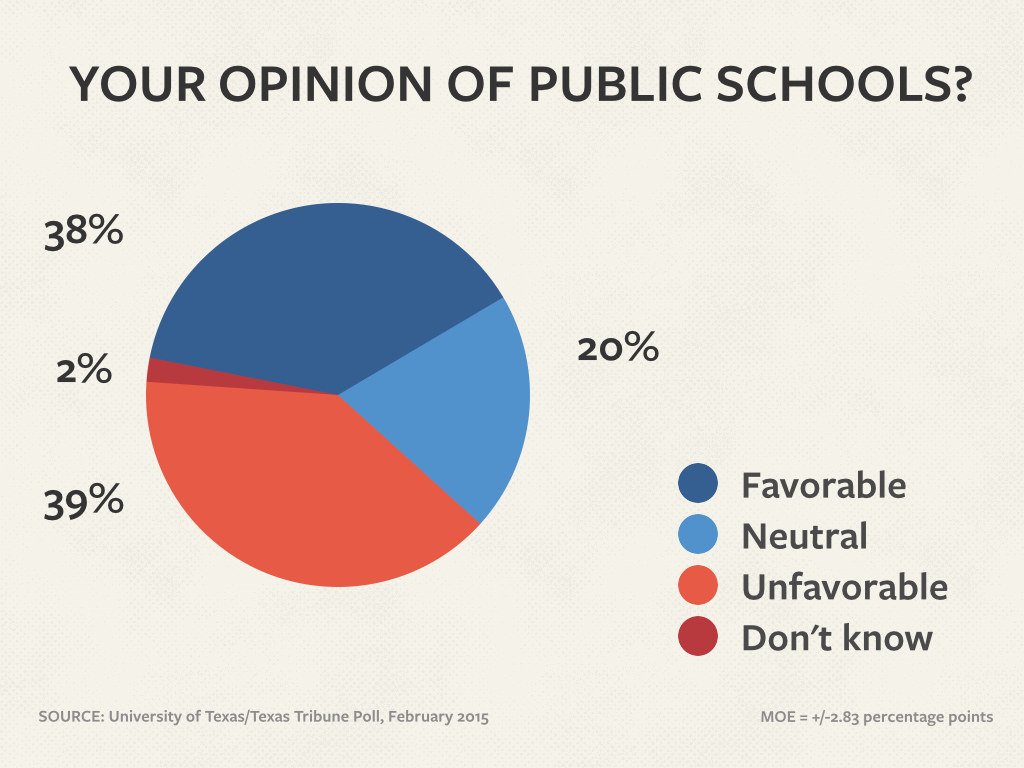 “With the public schools, we rate them low but love our teachers,” Shaw said. “If we had put teachers in there, they would have scored off the charts.” 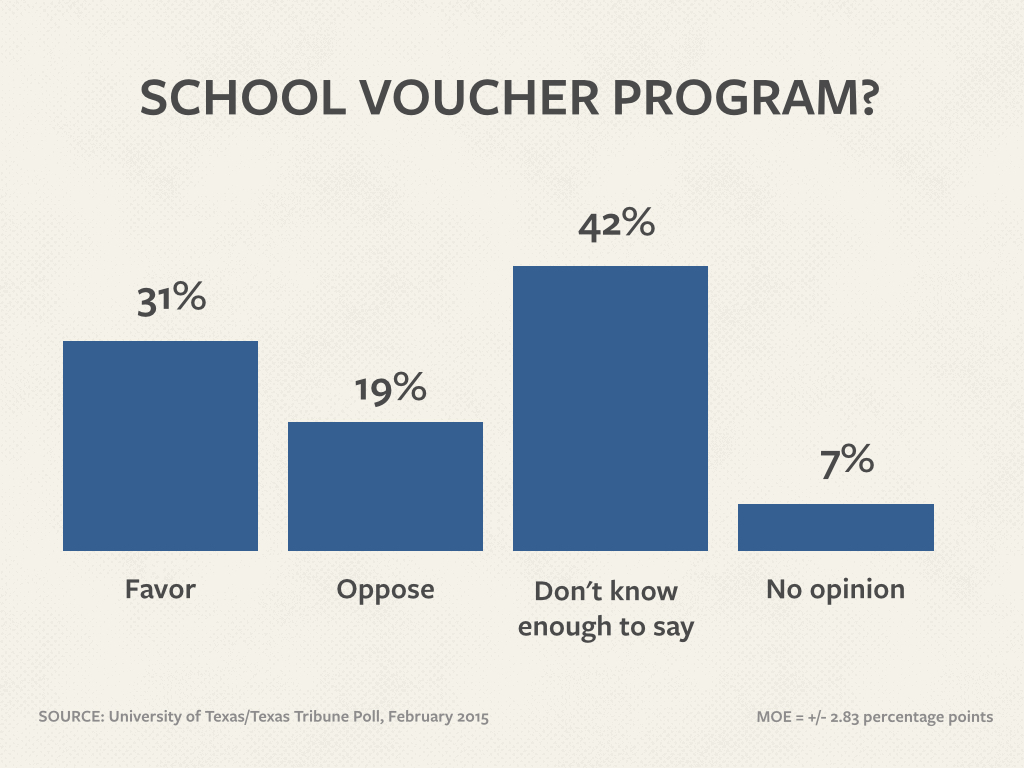 Vouchers and Other School Proposals

School voucher supporters have a 3-to-2 advantage over their opponents, but they are outnumbered by Texas voters who have not formed an opinion on the issue, according to the poll.

Nearly half of the voters polled said either that they don’t know enough to have formed an opinion on publicly funded vouchers for private schools or that they haven’t picked a side; 31 percent favor a voucher program and 19 percent oppose one.

“People don’t look to vouchers to solve the problems of the public schools,” Henson said. “They want more money channeled to their teachers, their classrooms, their schools.”

Asked whether they have been following news about vouchers in Texas, 60 percent said “not too closely” or “not at all,” and only 10 percent chose “very closely.”

Asked about several proposals for improving education in Texas, 49 percent said they think creating a school voucher program would be an effective proposal, while 22 percent said it would not be.

That was the least popular of a battery of options for schools and the only one that didn’t draw majority support. 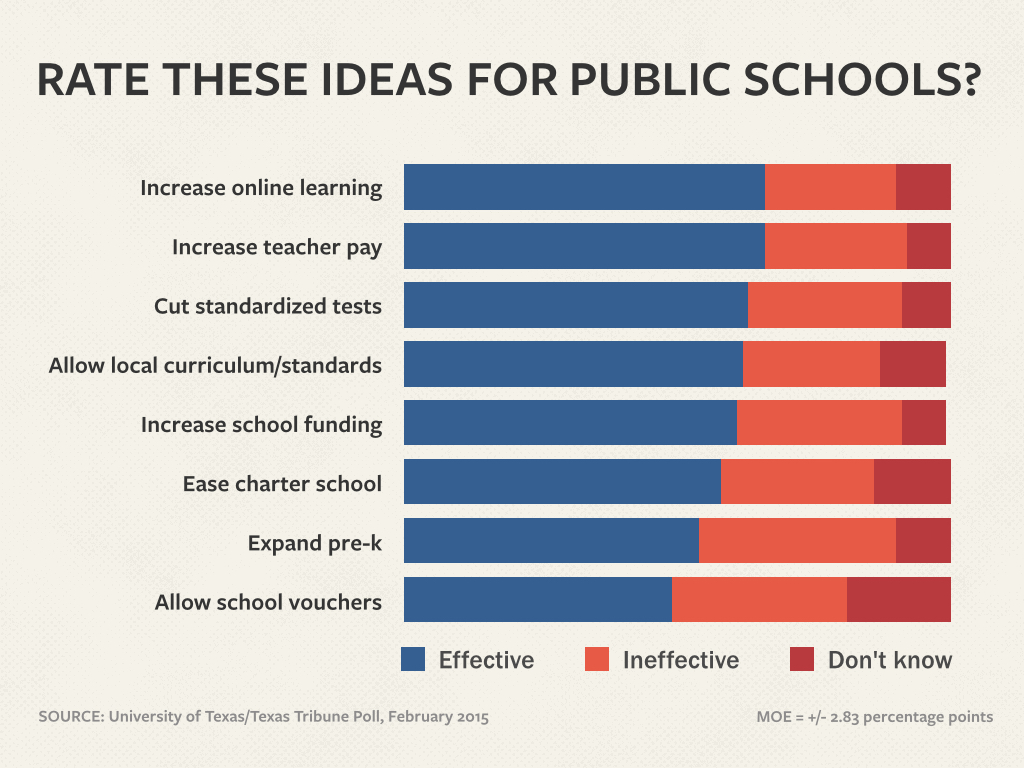 On the other end of the scale, 66 percent of voters said increasing the pay of public school teachers and increasing opportunities for online learning would be effective, 63 percent would like to cut the number of standardized tests, and 62 percent said allowing more localized control over standards and curriculum would be effective.

“That ‘somewhat’ on online learning tells me that people aren’t certain but are intrigued,” Shaw said. “And there is almost no opposition to online learning or to localized control.”

Other ideas they think would help: increased funding for schools, making it easier for charter schools to open and operate, and expanding state-funded pre-kindergarten programs.

This is one of several stories on the latest University of Texas/Texas Tribune Poll. Monday: Presidential primaries and the mood of the state. Tuesday: Guns, criminal justice, marijuana and the death penalty. Wednesday: Taxes and transportation. Thursday: Government and voter priorities. Also today: Immigration.