The only kind of government really unpopular with Texas voters right now is the federal kind, according to the latest University of Texas/Texas Tribune Poll.

Only 23 percent have a favorable view of the federal government, while 57 percent said they view it unfavorably — including 36 percent with a “very unfavorable” opinion.

State and local governments are more popular, if not overwhelmingly so. State government got favorable ratings from 50 percent and unfavorable marks from 27 percent. Local government’s numbers were a little lower: 46 percent positive and 24 percent negative. 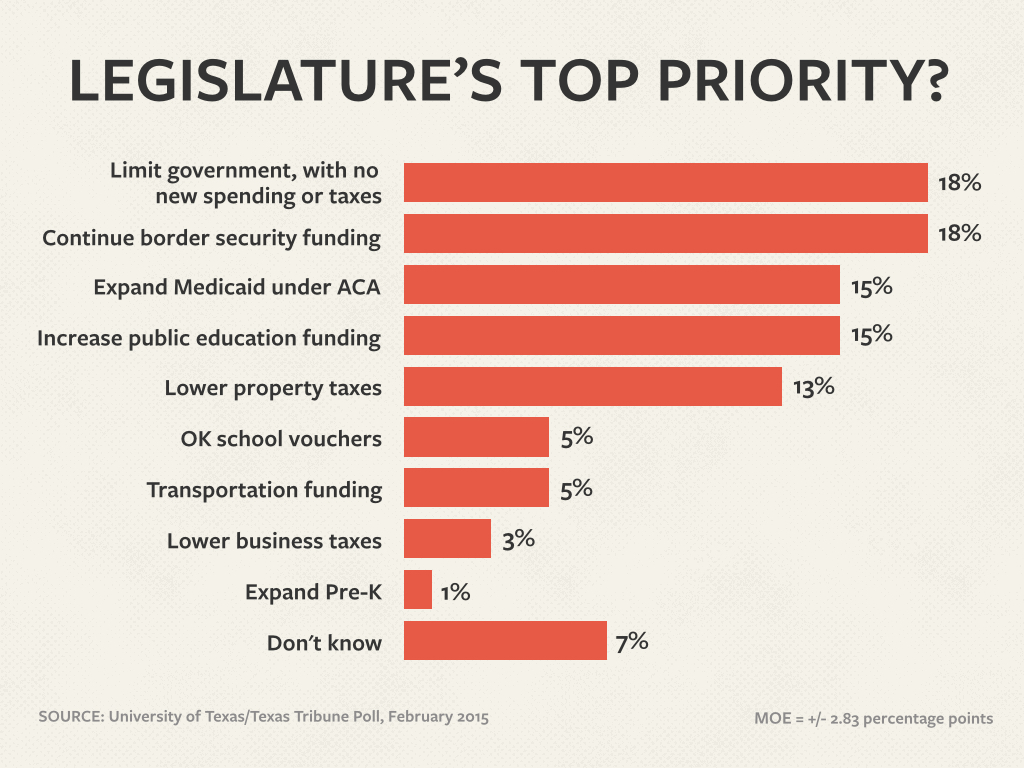 But just because Texas voters are pretty happy with state government does not guarantee that they and the people they sent to Austin are in sync. They don’t necessarily share the same priorities, the poll found.

Lawmakers are plugging away on the budget and taxes and border security, loosely mirroring overall voter priorities of limited government and border security. But the third item on voters’ list — expanding Medicaid funding under the Affordable Care Act — has hardly been mentioned by legislative leaders.

“The party split here is obvious,” said Daron Shaw, a professor of government at UT-Austin and co-director of the UT/TT Poll. “The Democrats are pretty predictable. Within the Republicans, I don’t think there is much of a consensus about what they want to do.”

“You really do see the roots of the Tea Party in these priorities,” said Jim Henson, director of the Texas Politics Project at UT-Austin and co-director of the poll. “Their top priority is still no new spending and no new taxes. The core is still there.”

Mashed together, limited government topped the list, followed by border security, expanding Medicaid, increasing funding for public schools and lowering property taxes. None of the remaining choices netted support from more than 5 percent of voters.

"If the opinion leaders are not in the bully pulpit talking about an issue, it’s not going to rise,” Henson said. “We saw that last [session] with water.”

The absence of an overriding concern in state politics gives lawmakers more freedom to write their own agenda, Shaw said.

“When there is not some sort of major economic crisis going on, voters are free to pick and choose their priorities and legislators are free to sort of shape that,” Shaw said. “The leadership seems to be kind of going their own way, not necessarily in response to public opinion. They have a lot of opportunity to shape priorities."

“It sets up a sort of a la carte legislative session,” he added.

Enforcement of federal immigration laws was the biggest exception: 70 percent support local enforcement, including 48 percent who strongly support it.

“It is the idea that the federal government has failed at that and they think the local government ought to do something,” Shaw said. “It’s a referenda: ‘If you can’t or won’t do it, somebody else needs to.’”

A majority of voters support local regulation of smoking in public places and of using mobile devices while driving — two issues that have stymied legislative attempts at statewide regulation while cities have been able to put restrictive laws in place.

“Smoking and texting fit pretty well into a local safety thing,” Shaw said. “On the others, there is too much of a policy judgment.”

Hydraulic fracturing falls somewhere in between. While 45 percent support local limits — fewer than half — they outnumber the 34 percent who oppose it. That, unlike the other items on the list, found a significant number of voters — 21 percent — saying they had no opinion. 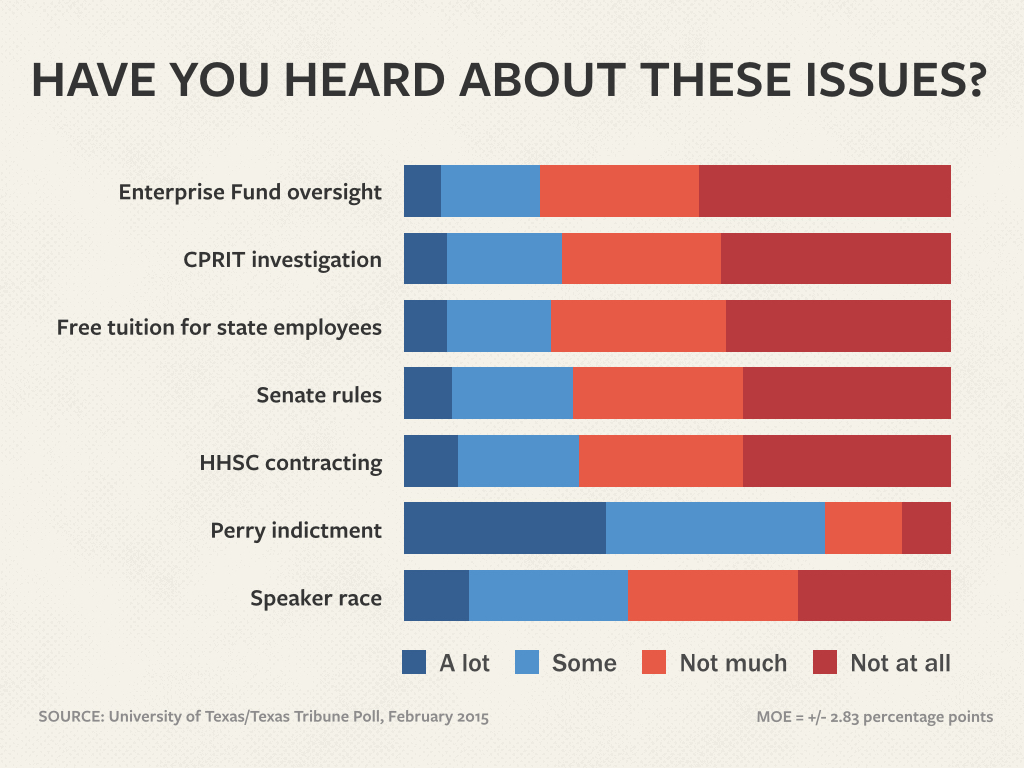 The issues that preoccupy people in and around state government often go unremarked by voters.

“The things that tend to preoccupy the close observers and the insiders are different from what preoccupies the public,” Henson said.

Some items break through. For instance, only 9 percent of voters said they have not heard anything about former Gov. Rick Perry’s indictments; 77 percent said they have heard some or a lot.

On the other end of the spectrum, large majorities have heard nothing or only a little about other issues that have made news recently in state government, such as contracting issues at the Health and Human Services Commission, tuition reimbursements for state employees, oversight of the Texas Enterprise Fund, the investigation of the Cancer Prevention and Research Institute of Texas, the race for speaker of the House and the change in the Senate’s rules that absorbed the members of that body.

“I think this stuff doesn’t mean anything until there is an election,” Shaw said. “We don’t pay much attention to what the media says about these things, but in an election, the media is paying lots of time on it and you have an opponent pounding on it. It’s not sensitivity — it’s that this is a session and not an election year.”

This is one of several stories on the latest University of Texas/Texas Tribune Poll. Monday: Presidential primaries and the mood of the state. Tuesday: Guns, criminal justice, marijuana and the death penalty. Wednesday: Taxes and transportation. Tomorrow: Education and immigration.