The race for speaker started off the week and also our questions to insiders in government and politics, and there is good news for incumbent Joe Straus in the responses: 76 percent of the insiders think the challenge from Rep. Scott Turner, R-Frisco, actually strengthened Straus. Turner lost that vote, 128-19, and Straus has a fourth term in the bag.

Senate committees are expected to be named at the end of next week, but we asked the insiders how fast or slow the House will be. Most don’t expect to hear about House committee memberships until the first week of February, with the rest split on earlier and later dates. Total them up, however, and 75 percent expect committees to be named sometime next month.

Lt. Gov.-elect Dan Patrick said during his campaign that he would have fewer Democrats chairing committees than his predecessor, and said he might have none at all in those positions. Two in five insiders think two Democrats will win chairmanships, and 23 percent think it will be three. But 13 percent expect to see no Democrats in those spots, and 20 percent said only one will get through the gate.

We also asked the insiders to predict the surprises of the coming session, and those are included in the full comments, which are attached. Here’s a sampling: 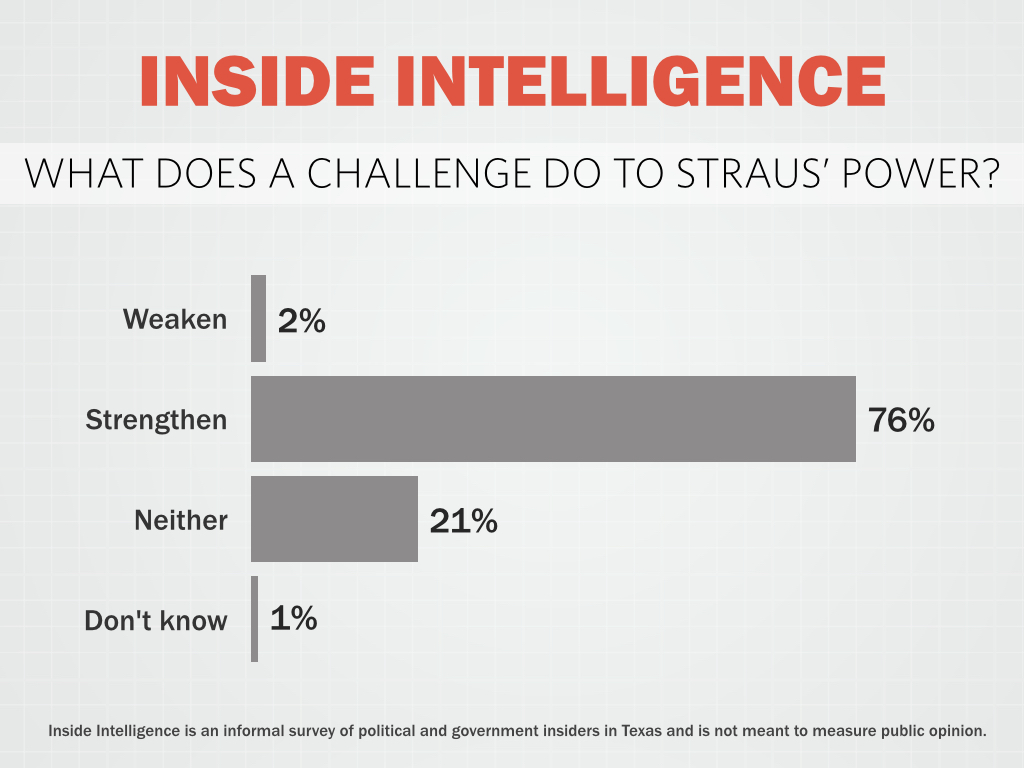 Will Scott Turner’s bid for speaker weaken or strengthen Speaker Joe Straus for this legislative session?

• "Glenn Beck robo calls statewide for Scott Turner were of little help and there seems to be a rising awareness that Straus maybe the only non patient in this asylum."

• "Every legislator voting for Straus must now convince his constituents that he can accomplish the conservative agenda that he campaigned on. That will be a TOUGH road because Straus will fight him every step of the way. One lieutenant complained to me last week that he couldn't pass a bill because another lieutenant talked against it on the floor. The majority of legislators then bowed to Straus to kill the bill."

• "If you try to kill the king, you'd better succeed."

• "Many members who were concerned about how much influence Empower Texans has, now know it's very little."

• "19 votes out of 150 - REALLY???? Those people need to take a basic math class if they are calling that a 'mandate' on how the House conducts business. "

• "The Turner 'challenge' had about as much impact on Speaker Straus as that bug that hit his car windshield during his drive into Austin from San Antonio. "

• "This demonstrates with clarity and certainty the limitations of Michael Quinn Sullivan's reach. Yes, he has grass roots, a database built through numerous campaign organizations, but if Scott Turner's the best he can muster at the Capitol, he doesn't have much to fall back on." 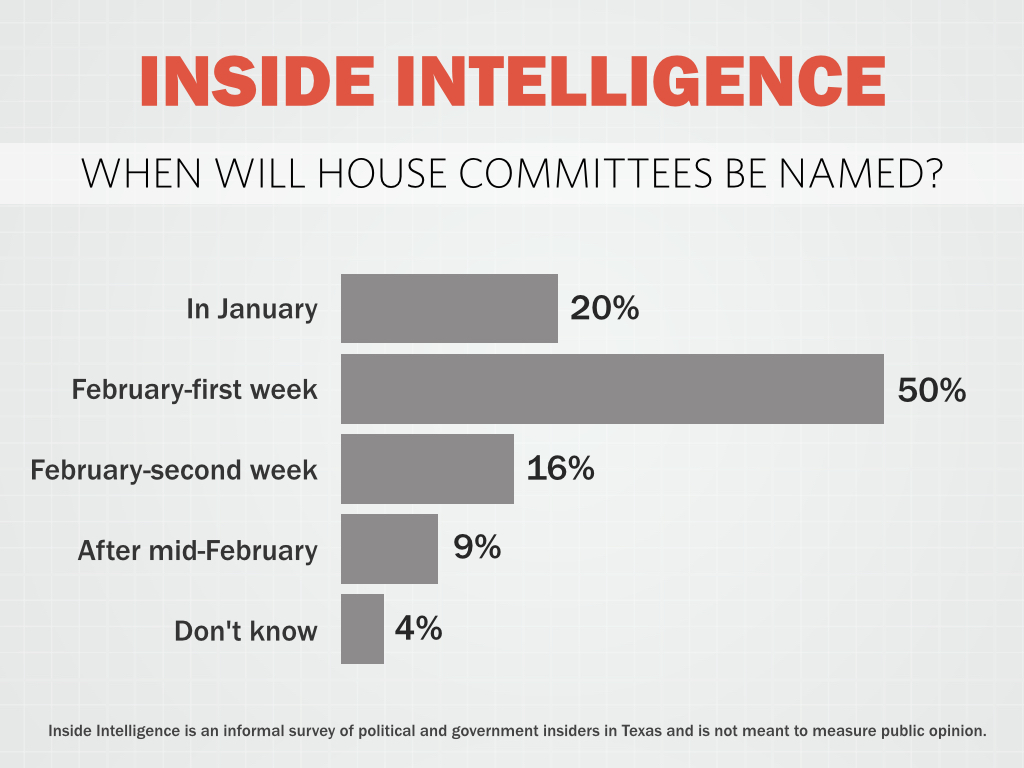 • "He's got to weigh all those IOUs and that takes a bit of time. He will penalize those who voted for him reluctantly and the 19 who voted against him. Sore winner!"

• "St. Patty's Day would be preferable, but that just ain't gonna happen." 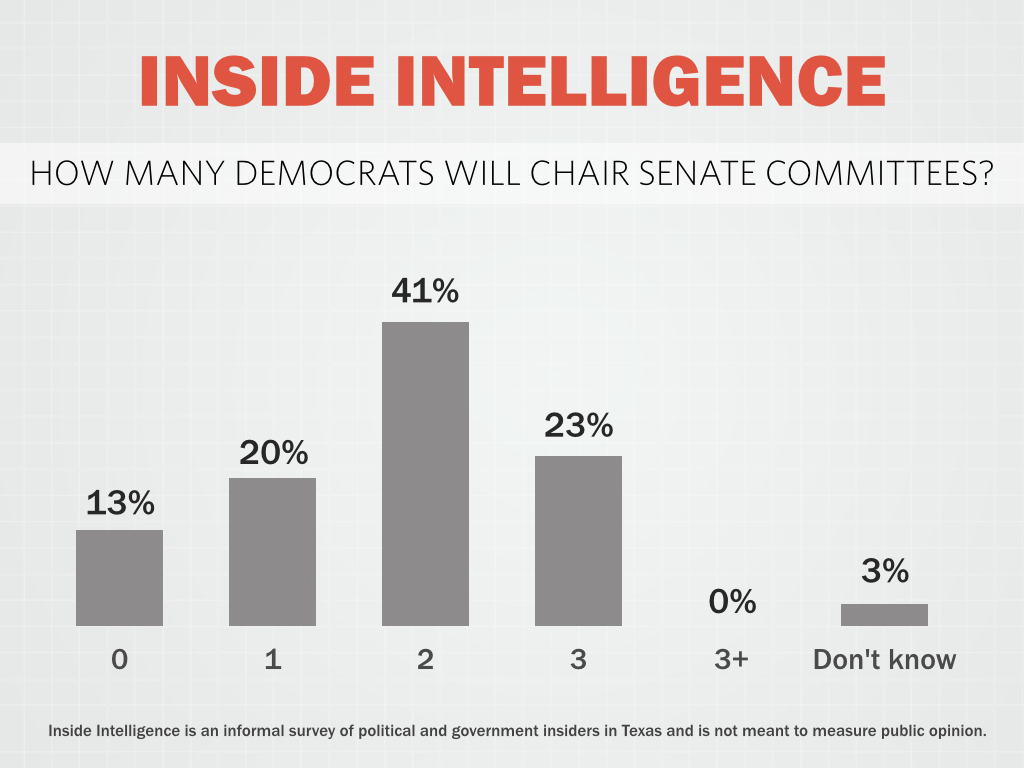 If the Senate has a dozen committees this session, how many Democratic chairmen will Lt. Gov. Dan Patrick appoint?

• "He must fulfill his campaign promise."

• "You can have them pissing in or out the tent. Patrick's call!"

• "He better not cut out the Democrats for as Bob Bullock discovered when he axed the Republican chairs, idle hands are the devil's workshop."

• "He doesn't want to give the wily Dems (I hear you laughing) too much time to get mischievous."

• "Two of twelve. And they will be crappy committees at that."

Play pundit: What will be the biggest surprise when committee appointments are announced?

• "Repub primary voters will be SHOCKED that Dan Patrick actually will appoint 2 Democratic chairs after he PROMISED them than NO Democrats would receive Chairmanships!"

• "Patrick will replace Nelson on Finance."

• "Straus doesn't send the 19 to Siberia like past Speakers would have done."

• "Hunter won't be at Calendars"

• "Whitmire will not chair anything"

• "Paul Bettencourt will chair and serve as poster child for the Tough Nut Committee."

• "The number of Sophomore House members that are Committee Chairs."

• "The biggest surprise will be that there are no big surprises. Standard chairmen. They’ll move around a little, but same people. Same leadership. Boring will be the surprise"

• "In the Senate, no D's as committee chairs or vice chairs. "