Wondering where oil prices will settle in the coming years? So are state officials and thousands of other Texans whose livelihoods are tied to that figure, which has plummeted in recent months.

Comptroller Glenn Hegar offered his best guess Monday. Oil’s taxable value will average between $65 and $75 per barrel through 2017, the Republican said upon releasing his first revenue estimate – a forecast of how much cash will flow into state coffers in the next two years beginning in September.

That’s significantly below what many economists expected just months ago, but far above oil’s value today. Due to a complicated mixture of geopolitics and supply and demand, the price of a barrel of West Texas crude has dropped by more than 50 percent in the last six months, to $46.17 as of Monday morning. (The taxable price that the comptroller uses is typically a few dollars below the market price.)

But don’t bet the ranch on Hegar's forecast. It is almost certainly wrong. No matter how hard state officials try to foresee swings in the oil market, its predictions are often inaccurate — sometimes wildly.

“Nobody expects you to be right about oil and gas prices,” Billy Hamilton, a former Texas revenue estimator, said last month. “They just expect you to be less wrong in the right direction.”

Oil prices play a significant role in the revenue estimate, which tells lawmakers how big of a pie — $220.9 billion in this case — they will divide during the session. Oil and mineral-related revenue makes up 10 percent of the state’s total tax collections, but less than 5 percent of the Texas budget, according to state records.

"The increased oil and gas production helped the state offset both weak growth in other sectors of our state economy as well as the drag from our sluggish national economy," Hegar said. "These lower prices will likely lead to a significant slowing in oil exploration and thus has dampened our overall economic forecast for the upcoming biennium” 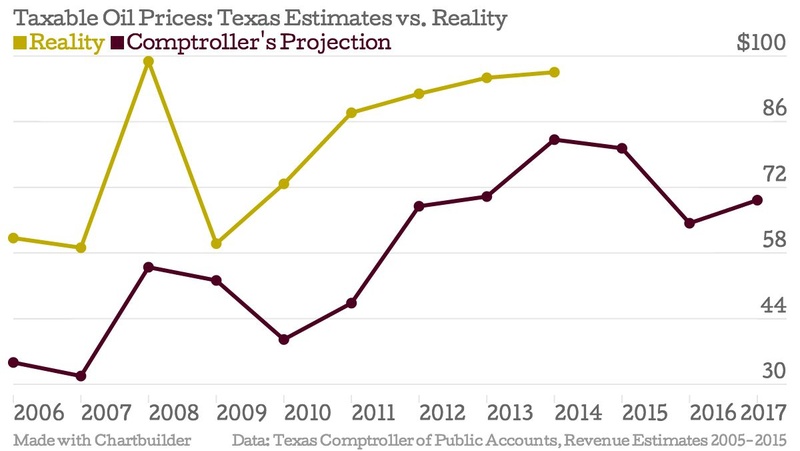 Hegar said he used a variety of sources in making his oil forecast. That included analysis firms like Moody's Analytics and IHS Global Insight, as well as conversations with people in the oil and gas sector as well as other industries.

"We felt like those numbers were very accurate, and the best that we could forecast out over the next two years," he said.

Since 2006, Texas has guessed within $20 of the actual average annual price just twice, according to data found within past revenue estimates. The closest was for 2009, when prices averaged just $9 higher than what Comptroller Susan Combs predicted. But her 2011 forecast was about $40 too low, leading her to underestimate the state’s cash flow by $11.3 billion, a 14 percent miss that ranks it among the worst estimate in the last 40 years.

All estimates over the past decade have been conservative, meaning Texas took in more oil money than it expected. But Combs' prediction of $80.33 per barrel for this year (made in 2013) may ultimately prove too optimistic. In his forecast, Hegar revised the 2015 estimate to $64.35.

Guessing wrong on oil prices is not just Texas problem, budget experts say. Oil-rich states across the country routinely miss the mark on how much money the volatile industry will give lawmakers to squabble over.

“They’re all going to be wrong, basically,” said Norton Francis, a senior researcher for the Urban Institute and a former budget forecaster in New Mexico. “All the information points one way, until it doesn’t.”