The 84th Legislature is about to start, so we asked our insiders in politics and government about the new people coming into statewide office. We asked about the early odds on the growing Texas field in the race for the Republican nomination for president in 2016, and also about budget and tax issues ahead.

Nine in ten expect big changes out of Lt. Gov.-elect Dan Patrick, who takes over from David Dewhurst — one of the people he beat in the GOP primary — later this month. But most don’t expect big changes from other statewide officials, running from a high of 24 percent who expect major change in the governor’s office to only 7 percent who expect big stuff out of the railroad commission. Aside from Patrick, the insiders expect little change — or none at all — in the offices run by statewide officials.

Jeb Bush is the frontrunner among the candidates with Texas ties in the GOP race for president. Sixty-seven percent of the insiders ranked him as likely to finish first, followed by Rick Perry, Ted Cruz and Rand Paul. 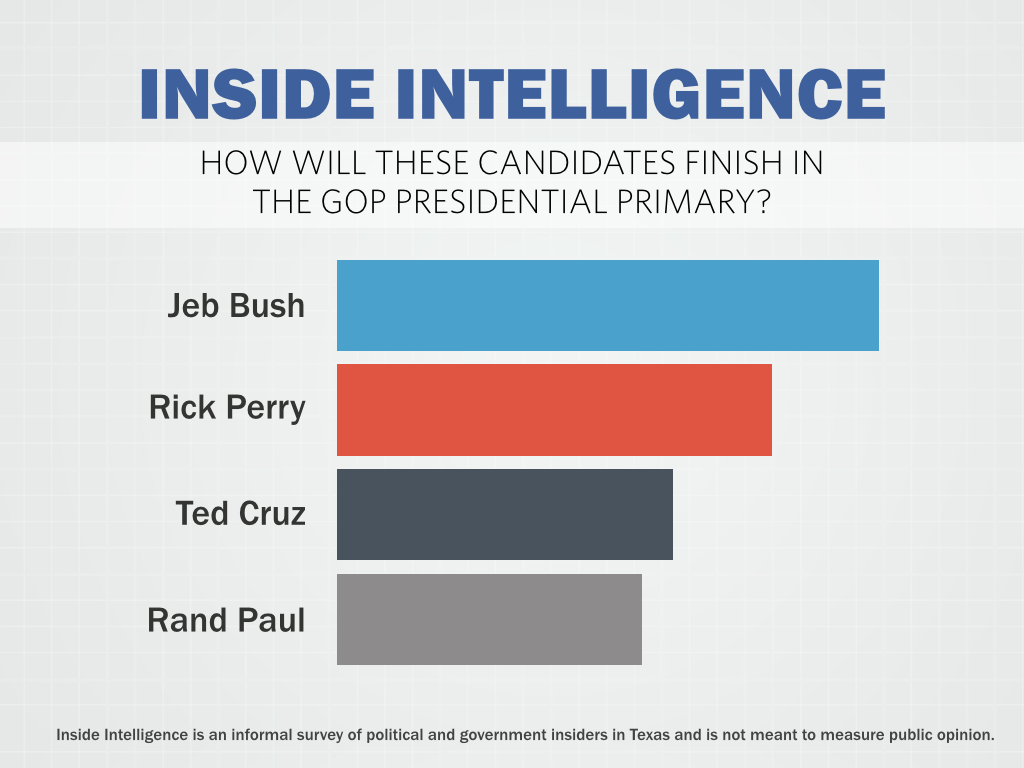 On the day before the legislative session begins, new Comptroller Glenn Hegar will roll out his first official estimate of the state’s revenue over the next two years. Early indications are that — for his purposes, for now — falling oil prices won’t put a big dent in the forecast of how much money is available to budgeteers. But 46 percent of the insiders predict oil prices will have a big impact on the budget, and 33 percent said it will affect state finances a little bit. About one in six expect the oil prices to have more impact in the next budget, written two years from now.

As is our habit, we collected verbatim comments along the way and a copy of those is attached. Here’s a sampling:

Many of the state’s elected officials are new. How will they differ from their predecessors?

• "The biggest changes will be the vendor revolution as Perry's cronies lose their sweetheart deals."

• "The conservative lean will be evident in all of the positions, but the LtGov seat is going to change the most at the whims of our new LtGov."

• "Policy wise, I wouldn’t anticipate the incoming freshman will veer to far from their predecessors. Tone and temperament wise, it'll be like a blue norther just blew through. "

• "In Governor's office, perhaps not much difference in policy positions, but far less cronyism. More thoughtful consideration driving policy decisions, as opposed to politics - at least I think and hope. Just the opposite in the AG's office."

• "I bet this Comptroller can actually do 'Comptroller-y' things like, ya know, correctly estimate state revenues and stuff like that."

• "Very excited to see the innovated ideas George P. will bring to the Land Office." 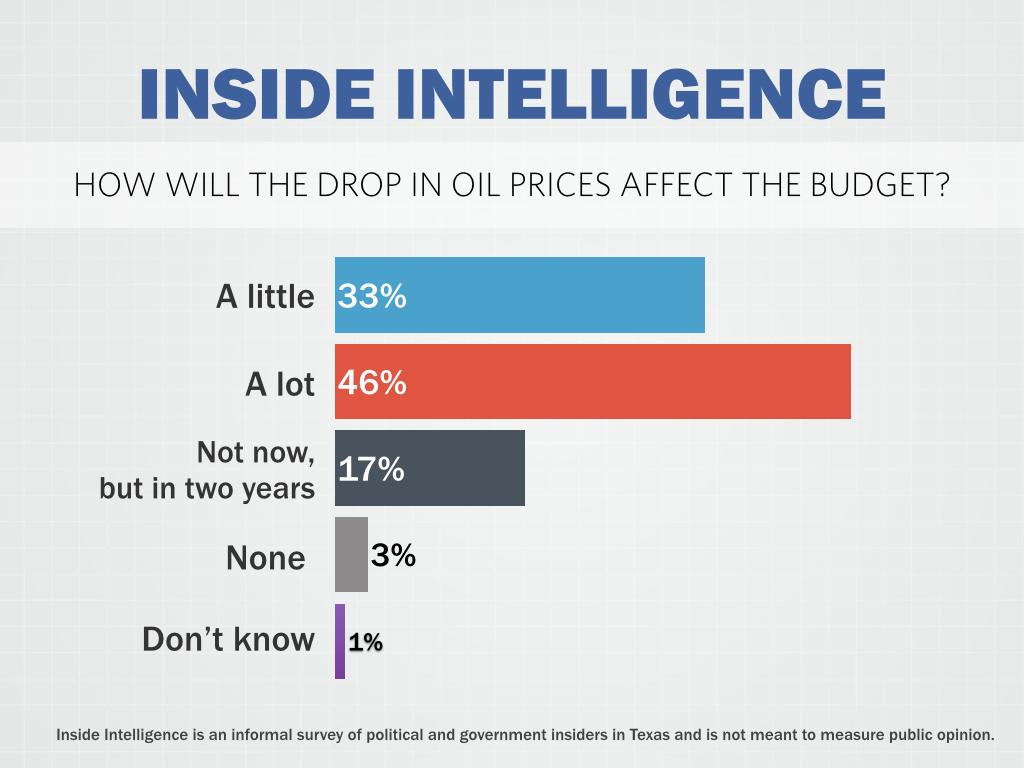 Will the drop in oil prices have much effect on the state budget written this year?

• "Lawmakers need to be very careful about spending money on programs that won't be sustainable in two years."

• "Falling oil prices will provide a ready excuse for candidates-turned-lawmakers to get out of everything they promised, including tax-cuts. Besides, they'll also say they need to save money for the public education lawsuit. Transportation is the only winner because people are filling up their tanks and the Constitution protects their funding!"

• "Fiscal restraint was a BIG campaign promise across the board. It's now time to deliver on that promise."

• "A lot of effect on the TxDOT budget (because of the new way that money goes to the Economic Stabilization Fund)."

• "Although the Texas is economy is diversified well beyond the oil and gas industry today, the O&G impact on state tax revenues is much greater than its impact on the overall State economy."

• "I griped (loudly) when gas was >$4/gal, and now I’m not suppose to be pleased that gas is <$2/gal? Jeez, is this conundrum a paradox or an allegory? Or just plain bullshit?"

• "If half of your heart quits pumping, does it have an effect on your health?" 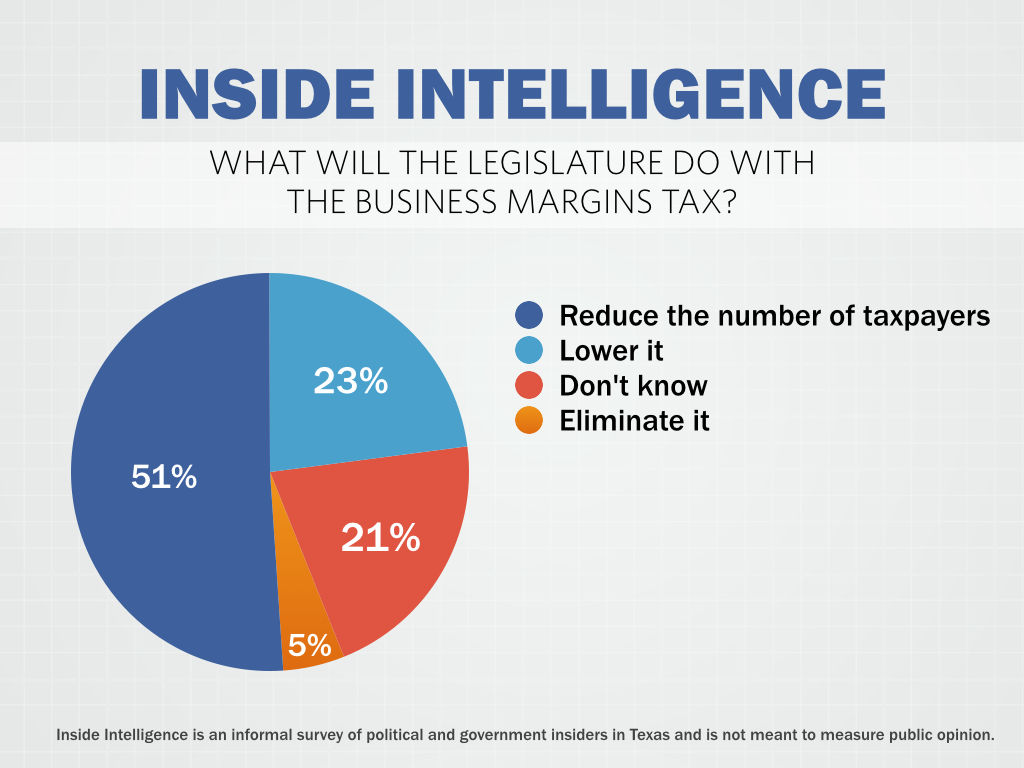 Will lawmakers manage to change the business margins tax?

• "It's cheap to buy off lots of small businesses with a bigger exemption, but TTARA won't like it."

• "Funny how 'small businesses' make lots of money these days."

• "The Comptroller finally understands how to implement it; businesses now know how to hide assets from it. The Lege will reduce the # and corral the escapees. "

• "They will probably lower it with some long-term prospect for further relief, or at least studies of whether it can and should be repealed or replaced."

• "Bidness gets what bidness wants"