Conversations about the election are wearing thin and the talk about the upcoming legislative session is picking up, so this week we asked the insiders in politics and government about the next Legislature.

Nine out of ten think state Rep. Scott Turner, R-Frisco, will get fewer than 25 votes in his bid to knock off House Speaker Joe Straus, R-San Antonio. The conventional wisdom is that that race is no race at all.

And they think Straus and Gov.-elect Greg Abbott will have the strongest day-to-day alliance among the three top officeholders, a group that also includes Lt. Gov.-elect Dan Patrick.  A smaller number thinks the Abbott/Patrick alliance will dominate, and a mere 3 percent think the pair to watch will be Straus and Patrick.

The Senate’s two-thirds rule — the practice of requiring two-thirds of the senators to agree that an issue is ripe for debate before bringing it to the floor — won’t last in its current form, the insiders said. While 18 percent think it will remain in place, 51 percent expect modifications and 29 percent believe that rule will die.

Patrick said during the campaigns that he will not have as many Democrats chairing committees as his predecessor, and might not have any at all, but 76 percent of the insiders read him to mean that he will have at least one; 19 percent said Republicans will hold the middle seats on all of the Senate’s committees.

And finally, we asked the insiders whether credential reporters should continue to be allowed into the House and Senate chambers while those bodies are in session. Most — 79 percent — said yes, but 19 percent think that privilege has run its course. 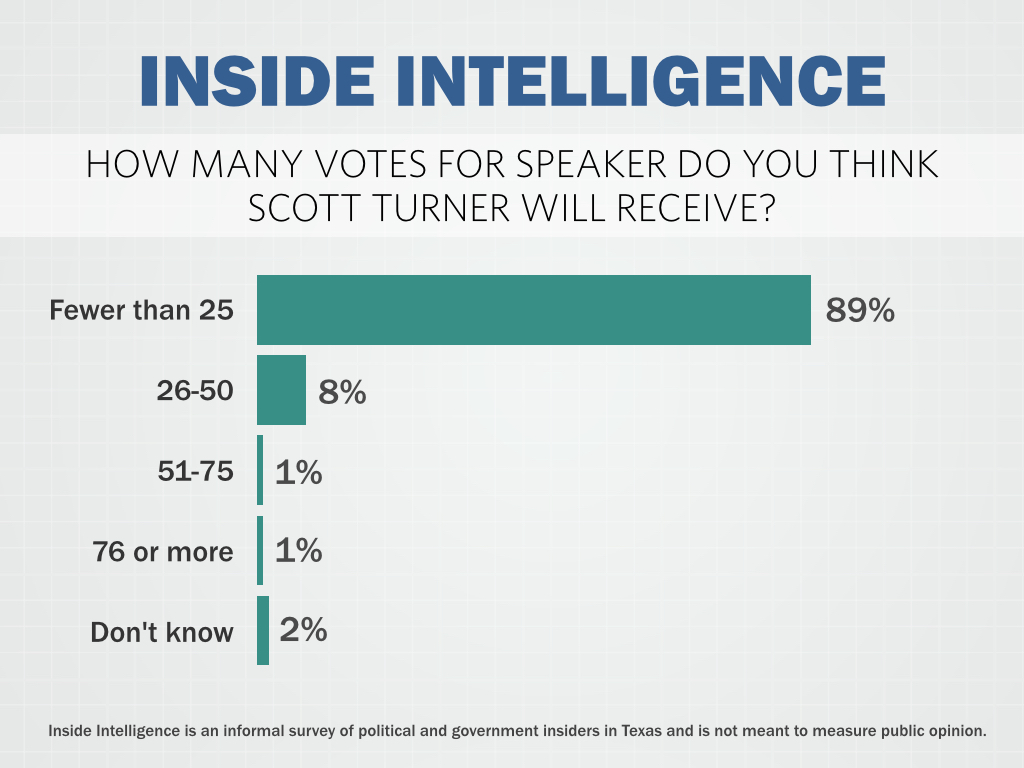 How many votes do you think Rep. Scott Turner will receive in his bid for speaker?

• "And it'll be a self-identified idiot test!"

• "In the end, he may get none. Either because he withdraws in good judgment, or his few supporters run like rabbits when the record vote comes."

• "In this case the conventional wisdom will hold true. And the outside groups pushing hard on the inside process won't make much of a difference. " 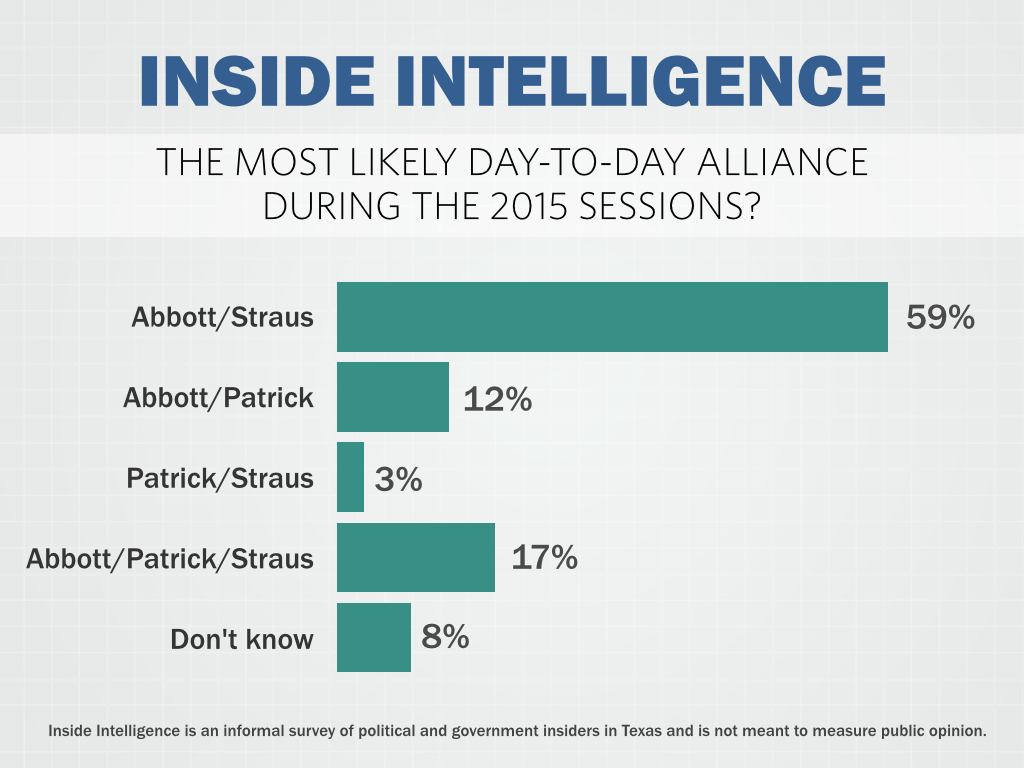 What’s the most likely day-to-day alliance among the top three officeholders during the legislative session?

• "Patrick will relish his outsider role. However, DP doesn't understand he needs Abbott and Straus in order to be a successful Lt. Gov."

• "Patrick will do his best to minimize Abbott as governor to keep his own quest for governor rolling."

• "This first session they will try to get along. "

• "Depends on how long it takes Patrick to realize that leading the Texas Senate is not a campaign speech, sound bite, or poke at the other Party."

• "I don't believe even the big 3 themselves can accurately predict this yet. Also, some may scoff at the Abbott/Patrick/Straus choice but there is a small chance it could work out that way. "

• "Abbott and Straus will work well together. Patrick will try to maintain a bit more distance because he has a pretty sizable ego that can only cozy up so far to others, but he will work collegially enough with the Governor and Speaker because he is also politically savvy and is writing his legacy in Texas politics from the Lt. Gov's office. This session won't be all puppies and rainbows, but it will not be the kind of divisive session for which the Tea Party faction of the GOP hopes."

• "Straus is too liberal to go along with Abbott or Patrick on much of anything. Besides, he is beholden to the Democrat Party for his chair. " 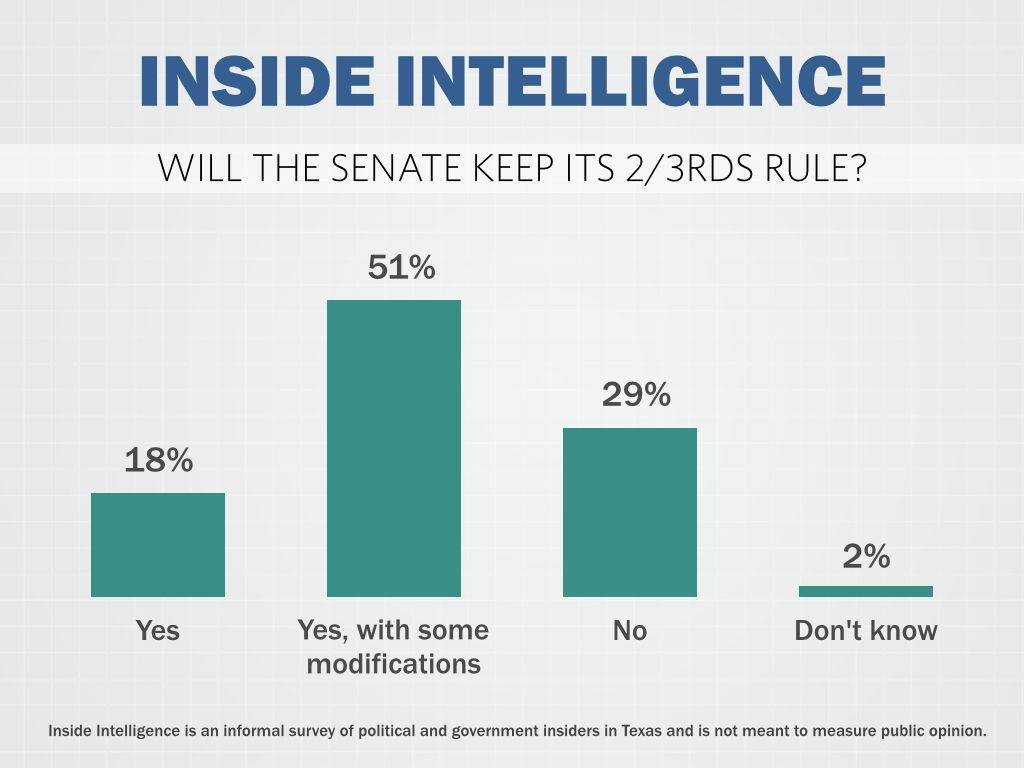 Do you think the Senate will keep the two-thirds rule in place?

• "Bye, bye two thirds rule (this will be so SWEET when the Dems come back in control and can point to the repubs for getting rid of the rule!)"

• "That modification being 60 percent rather than two-thirds."

• "It would be a politically unacceptable result for the Tea party to win the Lt Gov seat and not at least reform the rule. "

• "I think the senate repubs will drive the show - not wisely but will get their fundamental issues of concern over to the house. More interesting will be the urban vs. rural or other issues out there that will cause some 'pause.'" 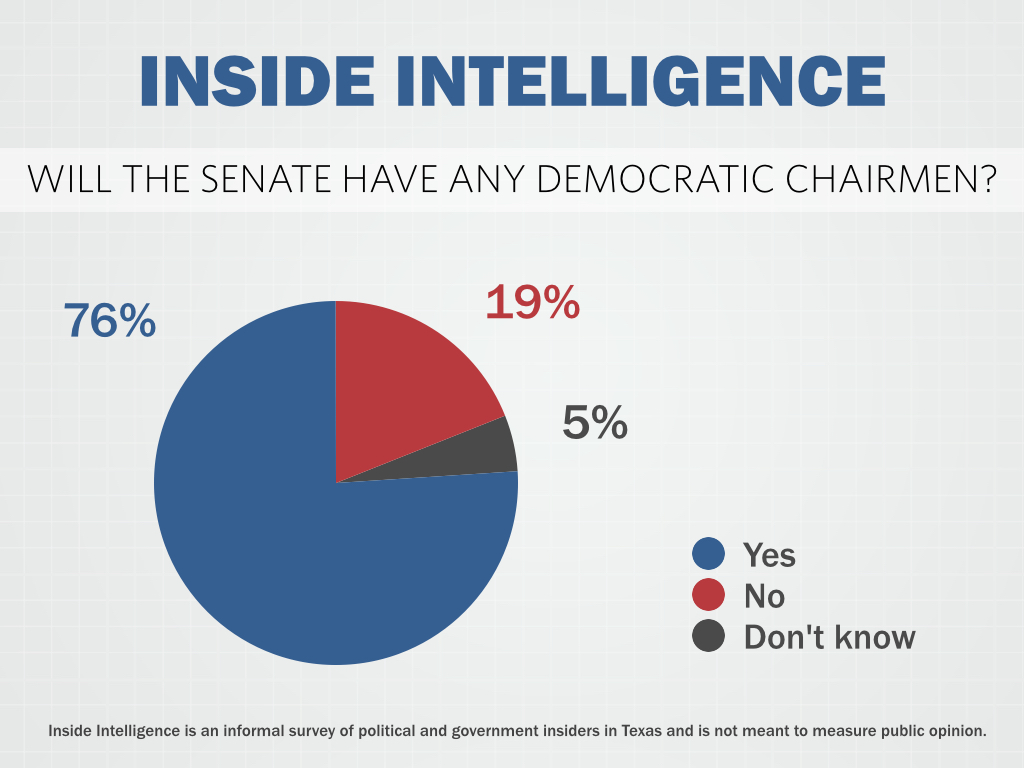 Do you think Lt. Gov.-elect Dan Patrick will appoint any Democratic chairmen?

• "Well he better not! He promised he wackadoodles, I mean supporters that he would NOT. "

• "One or two for relatively minor committees."

• "Let's just see Patrick try to refuse a committee chair to the Dean of the Texas Senate, who has forgotten more about the Texas Senate Rules than Patrick will ever know."

• "Wasn't there a campaign promise?"

• "Say what you want of him, but we all can acknowledge he is a shrewd politician. "

• "Don't want a bunch of angry veteran Senators do you?" 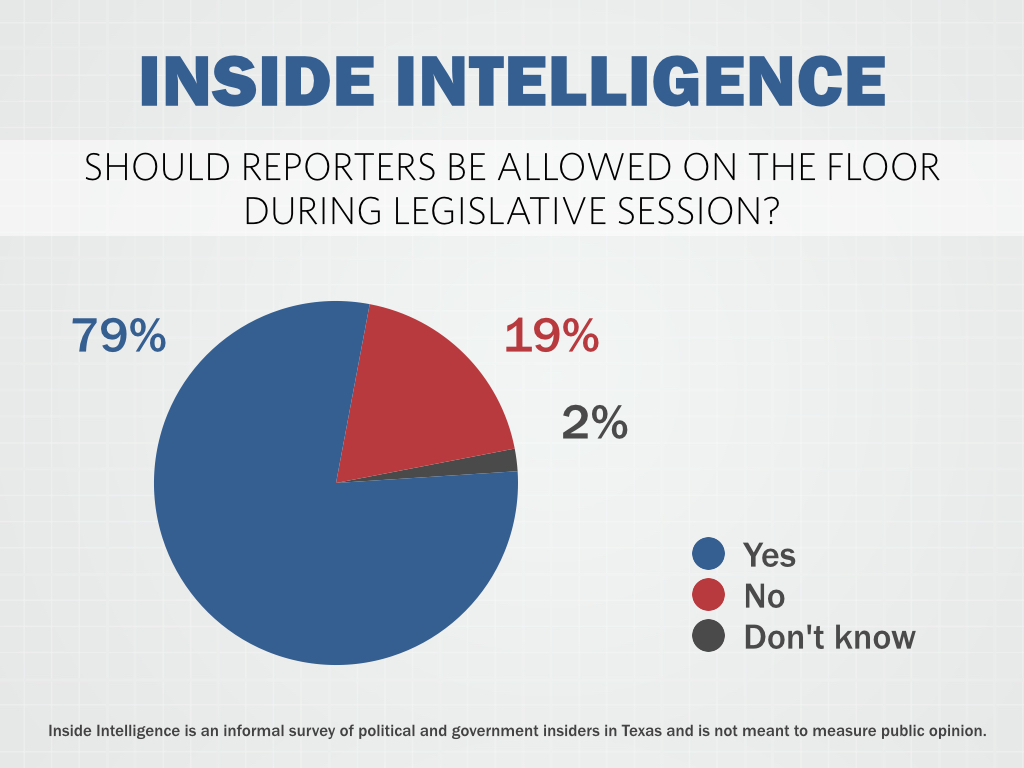 Should the Texas Legislature continue to allow credentialed reporters on the floor when the House and Senate are in session?

• "However, in the interest of good governance, House and Senate members should be excluded from the floor at those times."

• "No. The very definition of 'journalist' has become corrupted by the cancer of politics. Journalists - fake and real - should be relegated to the gallery with the alternate benefit of creating the appearance of an interested public. "

• "But anyone who is recruiting candidates, sending paid media to voters, or engages in campaigning is not a 'credentialed reporter' regardless of what other hats they may be wearing. Certain roles and activities should completely disqualify people from any claim of being a 'reporter.' "

• "No real harm in it. Some actual reporting occasionally results."

• "No. When the press was the sole source of timely news for constituents, it made sense for politicians to have them close by to schmooze, cajole, and leak stories to. But social media in the 21st century has removed the political utility of having the press at your elbow. It's time for reporters to have to chase down members just like the rest. Join us up in the gallery, folks, the weather is fine up here."

• "How does one define 'credentialed' though, or better yet - what activities would preclude someone from receiving credentials to 'report' from the floor?"