Bypassed by the Miracle

Bypassed by the Miracle is a weeklong series on the people and communities that have missed out on Texas' economic success or are finding that it comes at a price. You can also read our related Falling Behind and Hurting For Work series.

Jeff Salmon had never put much thought into the electric grid. But that changed in June 2012, when an electric bill put Frontier Texas — the Abilene museum and welcome center he runs to help patrons relive the Old West – nearly $3,300 over budget, a figure equivalent to entrance fees for an extra 620 visitors.

“The reason it was so frustrating was that it kind of came along without any notice,” Salmon said of the bill, which forced his small nonprofit to cancel a slate of new educational programs and a fall festival.

Salmon learned that the cause of the larger bill was an unexpected rate hike tied to congestion on the electric grid, a problem rooted in West Texas’ resurgent oil fields. Oil production in the region has grown faster than the infrastructure needed to meet new electricity demands. That has strained the grid, increasing costs for a host of nonprofits, churches, schools and other businesses in the region's once-sleepy communities.

“We’re not all booming,” said Salmon, who says his museum is back on track this summer after overhauling its budget process. “I never wanted to be this much of an energy expert, and I still don’t know enough.”

The outlook has improved since congestion charges shot to record highs during the scorching hot summer of 2012. Milder weather has helped curb electricity demands, while transmission companies spent hundreds of millions of dollars rushing to build power lines. But experts say it could take years for congestion prices to return to normal as the oil and gas industry continues to thrive in West Texas.

Texas is reveling in unprecedented oil production, triggered by technological advances such as hydraulic fracturing. The state is producing more than 90 million barrels of oil each month. That’s easily more than twice the monthly oil production from three years ago, accounting for more than one-third of all U.S. production, according to federal data.

West Texas has played a starring role. Its Permian Basin, whose steady production before a 1980s price crash cemented Texas’ reputation as an oil-rich state, is now the most lucrative region in the U.S. Texas regulators are issuing more than twice the drilling permits there than they they did in 2007.

But producing that oil requires plenty of energy. And as operators connect rigs, pump jacks, compressors and other equipment to the energy grid, they suck more electricity.

From 2007 to 2012, energy consumption in West Texas increased by nearly 14 percent, according to the Electric Reliability Council of Texas, or ERCOT, which manages the grid covering ­­­­­­most of the state. 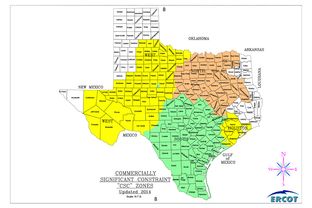 EnlargePhoto courtesy of ERCOT
This map shows the four congestion zones on the electric grid covering most of Texas.

Generating electricity isn’t the biggest issue. The problem lies in sending power to all who need it. Many of the region’s aging transmission lines, like congested interstates at rush hour, are not equipped to handle the surge in demand. To skirt those bottlenecks, grid operators switch on less efficient power plants, backups that are more expensive. The extra costs of running those backups show up on consumers' monthly electric bills.

Though West Texas’ congestion costs have fallen, they are still higher than those anywhere else in the Texas.

In 2012, congestion charges in the state's west zone averaged about $11.47 per megawatt-hour, according to an analysis by Priority Power Management, a Midland-based firm that helps clients manage energy supply and demand. At the same time, the rest of Texas paid about 53 cents per megawatt. (A megawatt-hour can power 500 typical Texas homes for an hour during mild weather.)

In 2013, west zone congestion prices averaged about $6.08 per megawatt-hour, while the rest of the state paid about 43 cents. Through August this year, prices in the west are closer to $5 per megawatt-hour.

Not long ago, energy users across the state shared local congestion costs. But in late 2010, Texas shifted to a “nodal” wholesale energy method. That mechanism instead spreads transmission costs among ratepayers within the grid’s four zones: north, south, west and Houston area. The change left West Texas with higher bills.

That was bad news for Seymour, a town of roughly 2,500 people that sits 50 miles southwest of Wichita Falls — hundreds of miles from Midland and Odessa — and fancies itself "the crossroads of North Texas." Congestion costs in the city, which lies inside the grid’s west zone, have totaled as much as 10 percent of the municipal energy bill, amounting to tens of thousands of dollars per month, prompting local leaders to ask regulators to more swiftly address the problem.

The town had company. Hardin-Simmons University in Abilene and a host of school districts were among those that voiced concerns to the Public Utility Commission of Texas in later 2012.

EBAA Iron Sales in Eastland, 90 miles southwest of Fort Worth, has faced a similar struggle. It, too, sits in the west zone.

“Well, it’s huge,” Greg Christiansen, the company’s finance executive, said of congestion costs at EBAA, which churns out pipe restraints and joints. “Energy is a key piece of our input costs.”

In November 2012, congestion added about 1.3 cents per kilowatt-hour to the company’s monthly bill, about half the cost of the electricity itself. Such extra costs, Christiansen said, make it more difficult for the company to compete with international manufacturers.

EBAA’s president, state Rep. Jim Keffer, R-Eastland, doesn’t begrudge the oil and gas industry for its role. The chairman of the House Energy Resources Committee, Keffer is a major supporter for an industry that has fueled the rapid economic growth some lawmakers call the “Texas miracle.”

“Texas is blessed,” he said in December while addressing a meeting of ERCOT members. “Everywhere in the country where this robustness in the economy is, it’s there because of oil and gas.”

But he does not downplay West Texas’ grid troubles. At the same meeting, following a presentation of ERCOT’s 2014 forecasts, Keffer quipped, “Unfortunately, my foundry is in the west zone,” drawing chuckles from the crowd of energy wonks.

Seeking more predictability, EBAA signed a multiyear contract last summer with a power provider that locked in the company at a flat rate for electricity – a hedge against future spikes.

Other major energy users have responded to congestion in a similar way: purchasing insurance. But that protection can add 20 to 25 percent to an average electricity bill, said John Bick, managing principal at Priority Power Management. Bick advises some of his West Texas clients to buy insurance, but he notes the move carries risks.

When congestion is limited, for instance, folks who purchase insurance end up overpaying for electricity.

“It’s a gamble,” Bick said. “This issue’s going to be around for a while.”

West Texas’ congestion problem caught experts off guard. They did not detect it until 2010, about two years after drilling ramped up in the region. ERCOT says it took at least another year for its planners to completely understand the problem.

Transmission companies have since energized new projects, providing relief. That includes the $7 billion Competitive Renewable Energy Zone power lines. The project, planned years before the drilling surge, was mostly geared toward sending wind power from the west to the Texas’ growing cities in the east, but it has also helped ease congestion within the region.

But other upgrades will take years to complete. By that point, depending on where oil and gas producers move next, the infrastructure could need even more work. Transmission projects “don’t get planned overnight,” said Jeff Billo, manager of transmission planning at ERCOT, who called congestion “one of the top things we’re looking at.”

ERCOT took so long to fully grasp the region’s needs because transmission companies struggled to predict where drillers would settle and how much electricity they would draw from the grid.

When a company plans to build a large facility — a factory or a refinery, for instance — grid officials tend to have an easier time making sure there’s enough power once it goes online. The long permitting process gives them an early heads up.

The situation is different for oil and gas drillers. Regulators grant permits much more quickly, and the industry’s energy needs are cumulative, spread among operators that frequently move around.

In South Texas, where transmission companies are spending some $300 million on transmission upgrades, a rush to the Eagle Ford Shale has bumped up congestion. But that case has been milder than in West Texas. In part, that is because much of the Eagle Ford’s growth happened where there was little grid infrastructure at all, prompting operators to bring their own (more expensive) power sources, such as battery-operated generators or dirtier ones fueled by diesel.

New wells in much of West Texas, however, often crop up near power lines – some of them aging. One by one, drillers plugged into those lines, ramping up demand and, at times, overwhelming the lines’ capacity.

Compounding these troubles are energy producers who are worried about tipping off the competition, and are therefore reluctant to share their business plans.

But that mind-set is changing — at least in the Permian Basin. Energy producers are beginning to share future drilling plans — generally aggregated and made anonymous — with grid officials because they need reliable sources of power, and because electricity is a big component of their operating costs.

Industry experts say companies have in some cases had to wait months after drilling a fresh well to pull from it because they lack power. After all, lost time on the oilfields is lost money.

Congestion is “a big issue of concern for us,” said Ben Shepperd, president of the Permian Basin Petroleum Association. “Clearly, we all wish we would have done this years ago.”

Disclosure: The Permian Basin Petroleum Association is a corporate sponsor of The Texas Tribune. A complete list of Texas Tribune donors and sponsors can be viewed here.