The reactivation of the southern segment of the Pegasus pipeline is stirring concerns among Texans living along its ruptured northern leg.

The 66-year-old pipeline, operated by the ExxonMobil Pipeline Company, had been fully shut off since a March 2013 rupture, which sent at least 210,000 gallons of heavy Canadian crude into neighborhood streets in Mayflower, Ark., prompting evacuations of nearly two dozen homes and leaving residents sick.

The U.S. Pipeline and Hazardous Materials Safety Administration, which regulates interstate pipelines, approved the company’s reactivation plan in March. The agency said the pressure must stay 20 percent below the level at the time of the rupture while officials review the company’s plan to bolster the pipeline's integrity.

The agency is still investigating the spill, but an independent report that it reviewed in August 2013 placed blame on manufacturing defects that worsened over time.

Folks in some communities along the segment’s path consider the Mayflower spill an example of what could go wrong in their backyards, and they hope Exxon’s latest step does not mean it plans to reopen the entire pipeline. 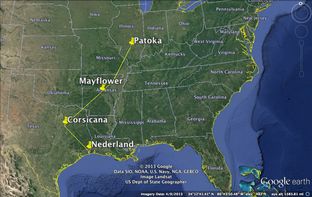 Some of the loudest worries have come from communities in East Texas – most notably Gun Barrel City, where officials have publicly called for the pipeline to remain shut off.  The Pegasus runs below the Cedar Creek Reservoir, built along the Trinity River, which the East Texas town and its neighbors depend on for drinking water and recreation.

“We are concerned,” said Linda Rankin, president of Gun Barrel City’s Economic Development Corporation. “Any time something affects one of the lakes, it affects so many other areas of our lives.”

Rankin said the issue has come up at meetings of the U.S. 175 Corridor Alliance, a recently formed group that promotes the business interests of eight cities between Seagoville and Athens.

Pipeline opponents worry about the type of crude that had been running through it, diluted bitumen. It's a black, tarry substance mixed with benzene and other liquid propellants that, if spilled, is particularly hard to clean up.

Critics are also concerned about the pipeline's age, which studies say leaves it vulnerable to cracking and corrosion if it is not maintained.

ExxonMobil officials say they take necessary precautions and follow all federal maintenance rules. Christian Flathman, another company spokesman, said ExxonMobil would restart the northern section only “when we are convinced it is safe to do so and have the Pipeline and Hazardous Materials Safety Administration’s approval.”

In March, ExxonMobil submitted a separate work plan for the northern segment, which is still under review, the regulating agency said.

State Rep. Lance Gooden, R-Terrell, who has pushed for the Pegasus to remain turned off, said he was asking ExxonMobil for more information about its plans and did not want to comment on the pipeline’s partial restart until the company responded.

He added, however, that his constituents have expressed little – if any – support for restarting the pipeline. “I could probably argue that 100 percent of the constituents I heard from around that area were very concerned about it operating again,” he said.

Last November, the pipeline administration proposed fining ExxonMobil $2.6 million for its role in the Mayflower rupture. Regulators alleged the company had committed a number of violations in testing and analyzing the pipeline ahead of the spill. The company has said the regulator based its charges on “flawed” analysis containing “fundamental errors.” The company has contested the charges and is waiting for an administrative court’s ruling, following a June hearing.