GUN BARREL CITY — For nearly 83 years, Jim Howell was hardly one to cause a political ruckus. But this spring, he realized that a crude oil superhighway ran through his backyard — just two feet below his patchy lawn and seven feet beyond a newly built porch displaying a sign declaring “cowpokes welcome.”

“At first I felt guilty and stupid,” Howell said about not knowing that a 20-inch-wide pipeline passed so close to his compact brick house. Guilt turned to alarm as he read more about it, and as representatives from ExxonMobil, its operator, showed up to add a row of yellow- and black-striped warning markers. The pipeline, named Pegasus, was the same one that ruptured about 320 miles northeast of here in March, spewing at least 210,000 gallons of heavy Canadian crude into neighborhood streets in Mayflower, Ark.

Now, in year 84, Howell admits to becoming an activist, even if he is not particularly fond of the label. Loosely organized by a few citizen action groups, Howell and others in this town — whose official motto is “We Shoot Straight With You” — make up a small, but growing pocket of East Texans who are asking federal regulators to permanently shut down the pipeline. The 65-year-old pipeline, which runs from Patoka, Ill. to Nederland, Texas, has been turned off since the spill, while ExxonMobil complies with a corrective action order from the United States Pipeline and Hazardous Materials Safety Administration, which regulates interstate pipelines.

“Half the people who come here don’t know the dang thing is under there,” said Howell, standing behind the front counter of the Main Street medical supply shop he runs. In front of him sits a red binder filled with pictures of the oil-covered Arkansas town, a pile of news articles detailing lawsuits against ExxonMobil and a short stack of petitions he is gathering to send to federal regulators. “They have the right to know.”

Pegasus is not the only major pipeline to concern landowners and environmentalists in Texas, a state crisscrossed by close to 59,000 miles of hazardous liquids lines, according to the latest federal tally. There is the Seaway project, for instance, which runs beneath several reservoirs in the Dallas-Fort Worth area on its 500-mile route from Cushing, Okla., to Freeport, Texas. Better known is the Texas leg of the Keystone XL, which is nearing completion.

Compared with train and truck traffic, pipelines are generally seen as the safest way — in terms of fatalities and injuries — for transporting fuels. Rail transport has drawn increasing scrutiny since last July, when a tanker train carrying crude oil exploded, killing 47 people in a Quebec town. 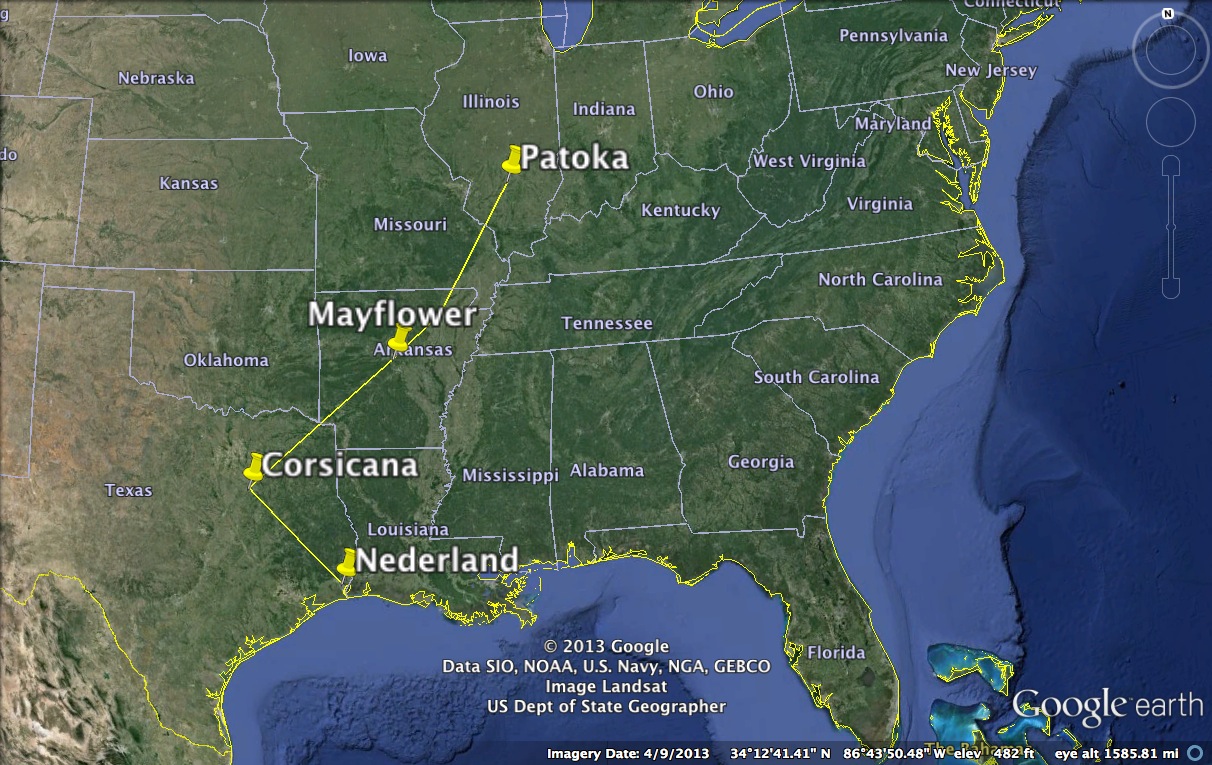 But for some East Texans, the Mayflower spill, which prompted nearly two dozen homes to be evacuated and left residents sick, serves as a vivid example of what could go wrong in their backyards.

Anti-pipeline groups, such as Safe Communities Alliance, Public Citizen and Texas Pipeline Watch, have seized on the Mayflower spill as they look to rally support in town meetings throughout East Texas.  A meeting last month in the nearby town of Seven Points, for instance, featured testimony from two residents who lived through the spill. “As soon as I stepped out of the door, I almost threw up,” Ann Jarrell, who lived just 300 yards outside the oil-covered neighborhood, told the audience. She described the smell hanging in the air that day as a mix of burnt tires and asphalt.

Along with her daughter and 3-month-old grandson, Jarrell said she stayed in her home for three weeks, enduring headaches and nausea before her doctor told her to leave. (Because she had no oil on her property, Jarrell said, neither officials from ExxonMobil nor the state suggested that she leave.) Meanwhile, the baby, named Logan, needed help breathing from a ventilator and two inhalers.

“He was a normal, healthy baby,” she said in an interview. “I will never go back there if [the pipeline] is reactivated.”

Agency representatives and those from ExxonMobil say they have no timeline for reactivating the pipeline, which depends on results of the investigation of the spill and the entire line’s integrity.

“We will not restart it until we are satisfied it is safe to do so and have the approval of PHMSA, said Aaron Stryk, an ExxonMobil spokesman. “We are committed to understanding the factors that led to the release in Mayflower and are working to ensure an incident like this does not happen again.”

But pipeline opponents got a boost Wednesday, when the pipeline agency sent ExxonMobil a “Notice of Probable Violation,” which alleged that the company had committed a number of violations in testing and analyzing the pipeline before the spill. The agency proposed a $2.6 million fine. The notice laid out extra steps ExxonMobil must take, which would probably further delay its reactivation.

In a statement, ExxonMobil said it is “disappointed” in the agency’s decision, calling the analysis “flawed" and containing “fundamental errors.”

The pipeline’s critics are particularly concerned about the line’s age, which studies say leaves it vulnerable to cracking and corrosion if it is not maintained.

“These pipelines were built under codes that were ancient,” said Evan Vokes, an industry whistleblower who worked for pipeline builder TransCanada until 2012.

Opponents also worry about the type of crude that had been running through it, diluted bitumen — a black, tarry substance mixed with benzene and other liquids propellants that, if spilled, is particularly hard to clean up. That’s because the substances separate and the solids sink to the bottom, unlike traditional crude.

“It gets your adrenaline going because you don’t want that happening to you,” said Mayor Paul Eaton of Gun Barrel City, sitting in a City Hall office filled with Old West decor.

The biggest fear, he said, is that Pegasus would rupture along a stretch below Cedar Creek Reservoir, built along the Trinity River, which Gun Barrel City and its neighbors depend on for drinking water and recreation. “A polluted lake would be devastating to this community,” he said. “We’re talking about people’s lives.”

Eaton said he would like to spend more energy protesting the pipeline and to work with surrounding communities on the issue. But it is hard to find the time to focus on an issue over which he ultimately has no control.

Nevertheless, he said, “We need to continue making a lot of noise.”