Falling Behind is a 10-part series on the flip side of state leaders’ aggressive pursuit of the "Texas Miracle.” You can also read our related Hurting For Work series here, or subscribe to our water and education newsletters here.

While Texas' Republican leadership touts the state’s booming economic growth, Texas-based climate scientists — some of the world’s most renowned — say that growth has come at a high cost.

In coming decades, the state is projected to be several degrees warmer and see longer and more severe droughts. Regions that already receive little rainfall will probably become drier, and portions of Texas’ 367-mile Gulf Coast should see rising seas, leaving them more susceptible to storms — which could also become stronger due to warming oceans.

Yet despite these forecasts, Texas remains one of the most significant contributors to global warming in the world. Year after year, Texas spews out more greenhouse gases than any other state in the country, and much of its growth is due to an energy boom that relies on extracting more carbon-polluting fossil fuels. 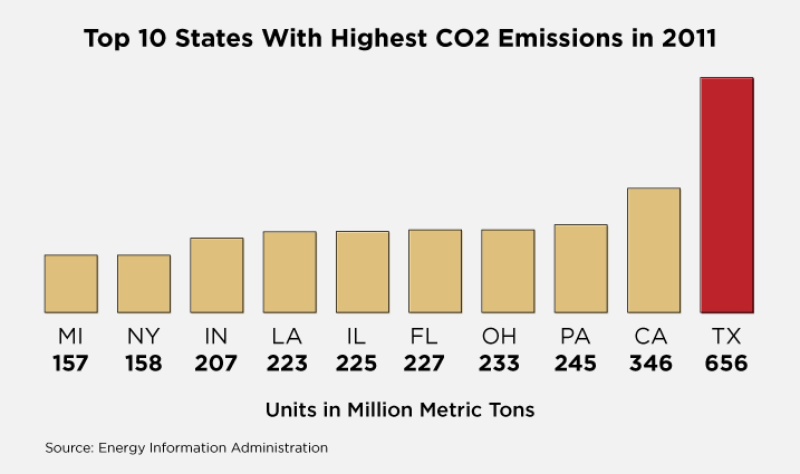 Without taking aggressive action to reduce greenhouse gas emissions that are warming the planet, scientists say, Texas is missing an opportunity to be a global leader in protecting against climate change. And if Texas’ state agencies continue to fail to take climate change into account when planning for the state’s future, they argue, Texans will suffer as a result.

“I call Texas a ‘state of denial.’ And that denial is becoming less tolerable as time goes along,” said John Anderson, a professor of oceanography at Rice University and a global expert on sea-level rise. “We need to think about action. And you just don’t see that happening.”

The impacts of climate change on Texas are already here, scientists say. Higher temperatures have exacerbated the current multiyear drought by causing more evaporation from dwindling reservoirs, reducing streamflows and diminishing the ability of rainfall to revive dry soil. Sea levels on portions of Texas’ Gulf Coast have risen up to one foot in the past century due to global warming, and will probably rise even more in the next one.

“Texas is really at the forefront of this problem,” said Katharine Hayhoe, a world-renowned scientist at Texas Tech University in Lubbock who studies the effects of climate change on communities across the country. “In the majority of cases, the ways that climate change are going to affect us are the ways that we’re already vulnerable.”

But Republican state leaders have voiced deep skepticism about climate change and whether humans are responsible. They insist that even if the science were true, Texas can do nothing meaningful to reverse climate change without hurting its economy. The Texas Commission on Environmental Quality (TCEQ) does not consider greenhouse gases to be a danger to the environment. And Gov. Rick Perry and Attorney General Greg Abbott, the favorite in the 2014 governor's race, have fought the federal government's attempts to combat global warming at every turn.

“The governor has made his position on climate change clear – particularly that we should not be sacrificing economic opportunity for Texas families through onerous regulations based on unsettled science,” said Lucy Nashed, a Perry spokeswoman.

Texas Republicans' drumbeat against climate science got even louder in their 2014 party platform, which reads: "‘Climate change’ is a political agenda which attempts to control every aspect of our lives. We urge government at all levels to ignore any plea for money to fund global climate change or ‘climate justice’ initiatives.”

Climate scientists in Texas have repeatedly taken aim at such views. Yet none of them are consulted by Texas agencies regarding climate projections, even as officials grapple with making important plans for the state’s future.

That means the agencies that must respond to diminishing water resources and a disappearing coastline have done no comprehensive studies on the effects of temperature increases on future water supplies, or of warming seas and melting polar ice sheets on Gulf Coast sea levels.

“One of the major problems we have in Texas is that the governor, the Legislature, the TCEQ, really don’t rely a lot on scientific input from the science community,” said Anderson, the Rice University professor. He said the rate of sea-level rise on the Gulf Coast is six times higher today than it was a century ago and will only continue to increase, but state officials are not planning for such a scenario. 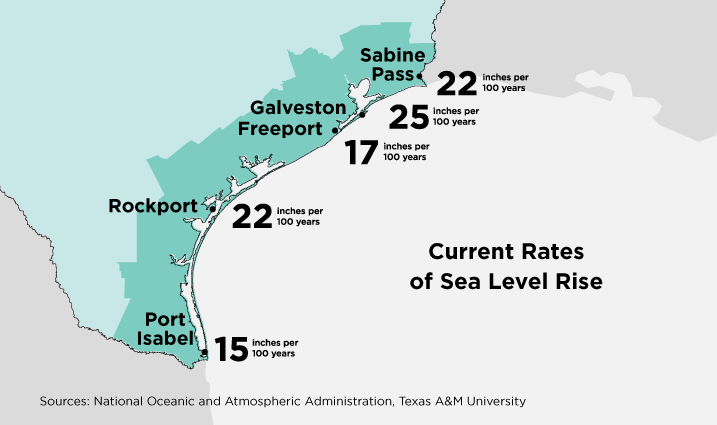 Texas A&M University, which Perry and all three TCEQ commissioners attended, is also home to a scientist who shared the 2007 Nobel Prize with Al Gore and other scientists for their work on climate change. Bruce McCarl, an agricultural economist, said that crop production would move northward, and potentially out of Texas altogether, as farmers are forced to take their land out of production for lack of water resources and excessive heat.

“I think Texas is quite vulnerable in terms of agriculture and water,” said McCarl, who has had no recent contact with state officials. “We’re probably the most affected state.”

A&M is also home to state climatologist John Nielsen-Gammon, who projects that global warming will reduce Texas’ water supply by as much as 15 percent in the coming decades. But he said he has not been consulted by any statewide officials regarding climate change projections in particular.

“Given that climate change has been politicized across the board, it doesn’t surprise me at all,” said Nielsen-Gammon, who was appointed by then-Gov. George W. Bush shortly before Bush became president.

Terry Clawson, a spokesman for the TCEQ, said that the agency looks broadly at research from across the globe, but “we do not cede our responsibility to evaluate scientific documents to selected researchers or research institutions.” The agency does not employ any climate scientists.

Bryan Shaw, the chairman of the TCEQ, said he was not convinced that the earth is warming and believes that limiting greenhouse gas emissions would pose too much of a risk to Texas’ economy. “Clearly greenhouse gases are why we are able to live on this planet,” Shaw said.

Texas leaders haven’t always been resistant to climate science. A state statute enacted more than 20 years ago actually gave Texas the power to regulate emissions in a way that could address “climatic changes, including global warming.” It received little attention at the time and has never been acted on.

When Bush ran for president against Gore, who had been vocal on the issue, a real climate conversation in Texas seemed at hand. In the fall of 2000, Bush even released a platform as part of his campaign that pledged to reduce carbon emissions from power plants.

By early 2002, at the behest of environmental advocacy groups, staff at the TCEQ — then called the Texas Natural Resources Conservation Commission — had put together a report recommending that Texas “expand … pollution prevention incentive programs to include CO2 and other greenhouse gases” and develop a complete inventory of its greenhouse gas emissions.

The agency’s director at the time, Jeff Saitas, said it was important for the state to reduce emissions as an insurance policy. “If it turns out global warming is caused by man, then we already are on the road to recovery,” he told the Houston Chronicle in 2002. Now a consultant, Saitas declined to comment for this story.

The commissioners initially voted to adopt Saitas’ recommendations, but the report never became a final draft. By then, Bush was in the White House, and his and state leaders' interest in climate change had waned.

The topic surfaced again in 2009, when several Republican legislators endorsed measures to promote energy efficiency and reduce pollutants — including greenhouse gas emissions. Democrats’ efforts to promote research of the effects of climate change on Texas also earned some bipartisan support. But nothing substantive made it to the House floor before time ran out.

Kip Averitt, who served as a Republican state senator from Waco in those years, is now a health and environmental consultant. While Averitt said he is still not sold on the science of climate change and the role Texas could play in fighting it, he regrets the tone on the issue today.

“Unfortunately, climate change is associated with a liberal agenda that most Republicans are initially going to reject, just because it’s a [Democratic] political issue … and the reality is, now Republicans are running the government,” said Averitt. “Quite frankly, it was that simple and nonconstructive …  You do your rhetoric, we’re going to do our rhetoric, and in the meantime, nothing gets done.”

Longtime state Sen. Troy Fraser, R-Horseshoe Bay, chairman of the Senate Natural Resources Committee, said he does not think that "the general public in Texas are in agreement with the regulation of greenhouse gases.” Instead, Fraser said, Texas has "moved forward with the things that are free enterprise issues, like wind, like solar.”

Yet despite Texas’ enormous gains in wind-energy production, regulators still publicly criticize renewable energy as being too unreliable, and Perry and Shaw are both fierce defenders of coal, a leading contributor of greenhouse gas emissions and other air pollutants.

Texas’ economic explosion, largely due to a revolution in fossil fuel-drilling techniques, is likely another reason Republicans have steered clear of climate science. The state’s economy runs on its ability to emit significant quantities of greenhouse gases and to export fossil fuels around the world.

Larry Soward, who was formerly a close political associate of Perry’s, believes the Texas governor's run for president — and the “Texas Miracle” narrative he touted — amped up the anti-climate science rhetoric. Perry's narrative had to include complete opposition toward environmental regulations, climate or otherwise, Soward said.

“When he made his run in the presidential race, he was totally negative towards environmental issues like greenhouse gases and climate change, and I think that was strictly because of the partisan politics necessary to get support,” said Soward, who remembers Perry as friendly toward environmental regulations during his early years in politics. Soward was appointed by Perry to serve as a TCEQ commissioner from 2003 to 2007 and is now an environmental activist.

Nashed, Perry’s spokeswoman, said the governor is committed to protecting the environment by reducing other “known pollutants” like nitrogen oxide, but does not believe greenhouse gases fall in the same category.

Indeed, Texas has spent more than $350,000 since Obama took office in 2009 suing the Environmental Protection Agency (EPA) over the regulation of greenhouse gases. Abbott, the attorney general, has challenged findings that greenhouse gases are a danger to public health and welfare, as well as the federal government’s regulation of such emissions from cars and large “stationary sources” like power plants.

None of those lawsuits were successful. Last fall, the U.S. Supreme Court declined to hear appeals after Texas lost its protest of the greenhouse gas “endangerment” finding and regulations of emissions from vehicles. And in June, justices ruled that the EPA can regulate greenhouse gases from large stationary sources.

“I can’t understand why Rick Perry and Greg Abbott are going to go out and sue, and they’re making such noise about this, other than the pure politics of it," said Thomas McGarity, a professor of environmental law at the University of Texas at Austin. “There’s a certain amount of religion that may be involved in this. These people are just absolute non-believers in climate change."

Editor's note: An earlier version of this story included a graphic on sea level rise with certain cities mislabeled.