Most Texas voters say men get paid more than women for the same work, but two in five say the state is either doing enough or doing too much to correct that problem, according to the University of Texas/Texas Tribune Poll.

While 59 percent believe men are paid more than women for the same work, there is a gender gap — and also a partisan one — underlying those numbers. While 47 percent of men say women are paid less for equal work, 44 percent of men say pay is equal across gender lines. Ask women the same question, and the split is 69 percent to 25 percent. Men are divided almost evenly when asked whether the state should do more or are doing enough (41 percent to 40 percent); women, by a 56 percent-28 percent margin, say the state should do more. 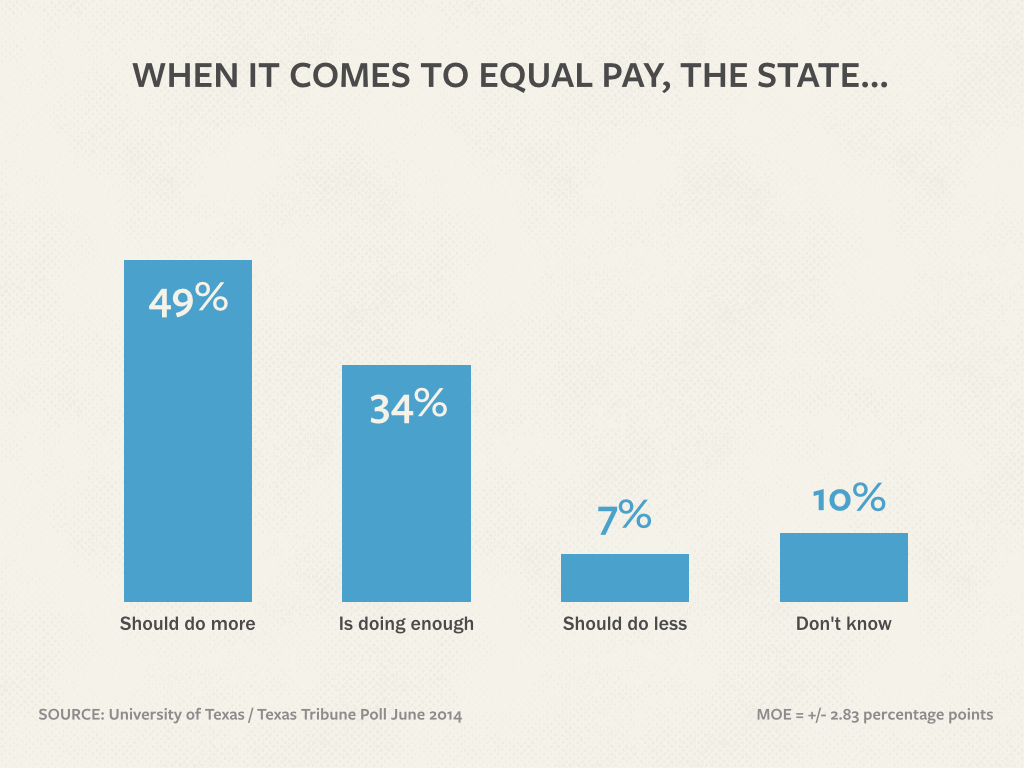 “People might recognize a problem but also have a coexisting ideological belief that tells them government cannot do anything about the problem,” said Jim Henson, head of the Texas Politics Project at the University of Texas at Austin and co-director of the poll. “This is one of those areas where the limited government approach by the Tea Party really stands out.”

Texas legislators passed a bill in 2013 that would have allowed women to sue employers for paying them unequally for equivalent work; Gov. Rick Perry vetoed that legislation, saying it duplicated federal law. The issue could factor into this year’s general elections, especially in the race for lieutenant governor, where Democrat Leticia Van de Putte is an advocate of the equal pay law that Perry vetoed, while Republican Dan Patrick has said he would block a Senate vote on that legislation if he is elected.

A Split on Abortion Exceptions 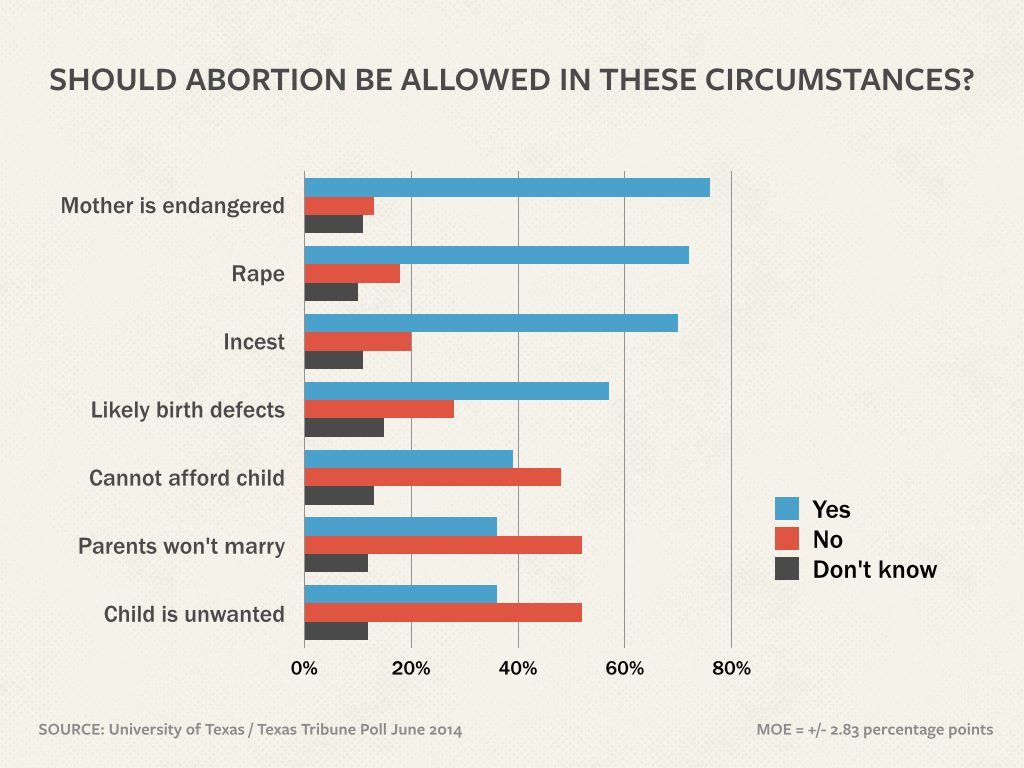 If the mother’s health is seriously endangered, 76 percent of Texas voters think it should be possible for her to obtain an abortion. That exception cuts across almost all lines: Republicans, Democrats, Tea Party adherents, men, women, rural, urban and suburban subgroups all support it. Similar majorities support exceptions for pregnancies resulting from rape and incest.

A majority — 57 percent — also supports an exception in cases where “there is a strong chance of a serious defect in the baby.” While the first three exceptions are often part of the platform for Republican candidates, an exception for birth defects loses much of that support among conservatives. While 80 percent of Democrats would allow it, support among Republicans falls below 50 percent, and only 37 percent of Tea Party voters favor that exception.

Three other possible exceptions — the family cannot afford the child, the mother does not want to marry the father, and the mother is married and does not want more children — were unacceptable to more people than not. Nearly half of the voters — 48 percent — said the first of those should not be allowed. And more than half would not allow the other two exceptions.

Several Republican candidates — notably, the four who ran for the nomination for lieutenant governor — discarded the usual three exceptions from their platforms during this year’s campaigns, saying they were against abortion except when the life of the mother is in danger.

“Absolutists are a clear constituency,” he said. “In the broader electorate, they are a pronounced minority.”

Texas voters remain in favor of the death penalty, with 71 percent saying they support it — a number that includes 48 percent who “strongly” support it. Strong opposition amounts to 12 percent, with overall opposition totaling 25 percent.

Given the alternative of life imprisonment without parole, 56 percent of Texas voters prefer the death penalty. Life without parole is preferable to 36 percent, with the rest expressing no opinion.

This is one of several stories on the latest University of Texas/Texas Tribune Poll. Thursday: The statewide general election races and a peek at the 2016 presidential primaries. Friday: Texans’ views on various officeholders and candidates, on the state of the state and the country, and on the Tea Party. Monday: Which major party candidates for governor would do a better job on big issues, and most important problems facing the state and the country. Yesterday: Texans’ views on a variety of education issues. Also today: Voters’ views on immigration and the Affordable Care Act.