The president and the Congress are remarkably unpopular in Texas — and the disapproval of the federal officials is so strong that it could have some effect on this year’s elections in the state, according to the University of Texas/Texas Tribune Poll.

Nearly half of the voters surveyed said they “strongly disapprove” of the job Barack Obama has done as president, and the same number gave that job grade to Congress. Combined with those who “somewhat disapprove,” 56 percent of Texas voters give the president bad grades and 72 percent disapprove of Congress.

“In a red state where Republicans have a built-in advantage, it is very difficult for someone like Wendy Davis to run when you have a president who looks like a motivating device for the other side,” said Daron Shaw, co-director of the poll and a professor of government at the University of Texas at Austin.

One difference in those federal numbers is that the president also has a little support, with 37 percent saying they approve strongly or approve somewhat of the job he’s done. Only 11 percent approve of Congress, and only 3 percent strongly approve.

The voters hold more favorable than unfavorable views of most of their top candidates and officeholders. The biggest contrast found in the poll is between the candidates for governor: Republican Greg Abbott is viewed favorably by 45 percent and unfavorably by 25 percent; Democrat Wendy Davis is favorably viewed by 34 percent and unfavorably viewed by 40 percent. Put another way, Abbott's ratings are 20 percentage points more favorable than not, while Davis' are 6 percentage points more negative than positive.

“She remains relatively unable to move one of the core constituencies that people thought she would move, and that is women,” said Jim Henson, co-director of the poll and head of the Texas Politics Project at UT-Austin. “She is not really making any progress with Hispanics. The campaign is either not succeeding or they have not yet begun to fight.”

Henson said Abbott’s numbers weakened slightly with women and with Hispanics from the February UT/TT Poll to this one, but said the attorney general is maintaining overall positive grades with both of those groups.

“Abbott is in a very good position with his base,” Henson said. “His coalition is in place, and he’s doing well enough with the groups that are supposed to be the prime components of the Davis coalition — Hispanics and women.”

Here’s how others did, with their party and favorable/unfavorable totals:

Two Democrats on the ballot — Alameel and Van de Putte — were unknown by the most voters: 63 percent either said they had a neutral impression or none at all about Alameel, a Dallas dentist and businessman, and 59 percent said the same about Van de Putte, a state senator. 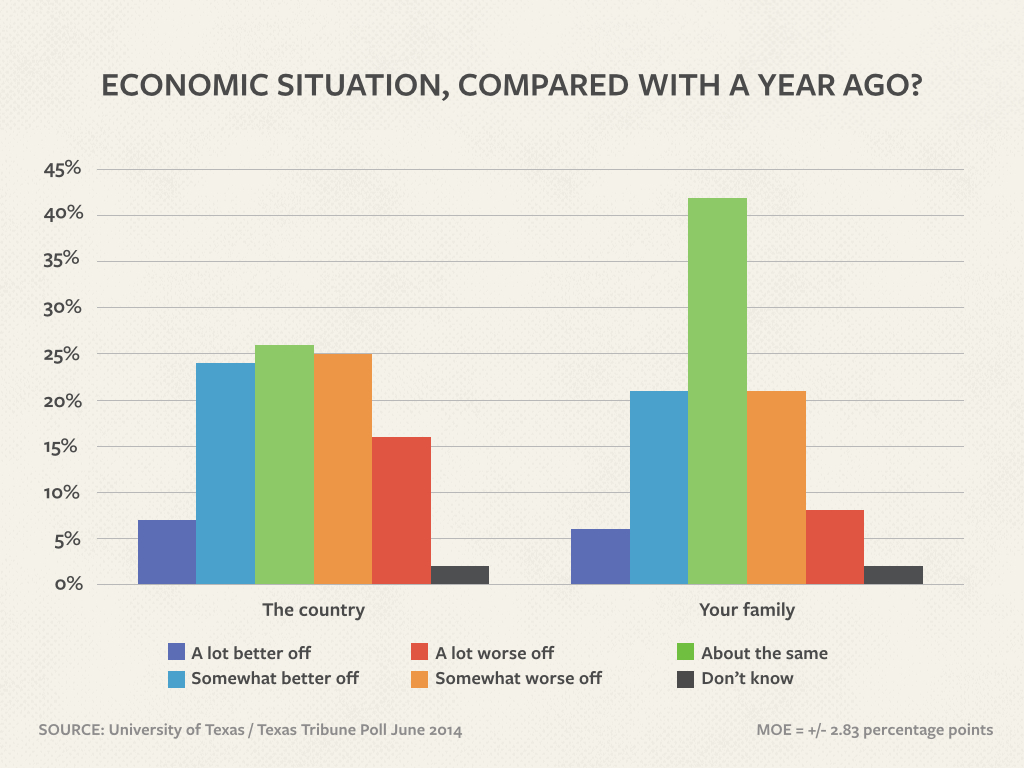 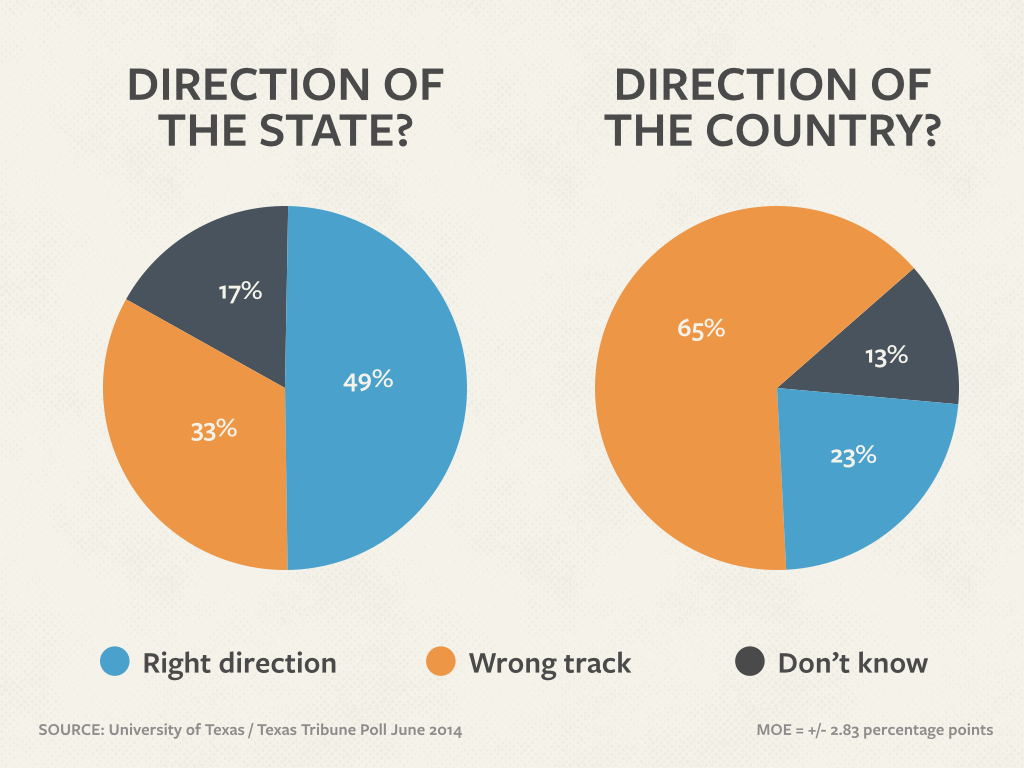 Mood of the Voters

The state is going in the right direction, according to 49 percent of the respondents, while 65 percent said the country is on the wrong track.

This is the second of several stories on the latest University of Texas/Texas Tribune Poll. Yesterday: The statewide general election races and a peek at the 2016 presidential primaries. Monday: Which major party candidates for governor would do a better job on big issues, and the most important problems facing the state and the country.