A slight majority of Texans say undocumented immigrants in the U.S. should be deported immediately, according to the University of Texas/Texas Tribune Poll.

Nearly half say that undocumented immigrants should pay out-of-state tuition at state schools even if they graduated from Texas high schools and have lived in the state for at least a year.

In a year when immigration issues have figured prominently in primary elections, the survey describes the sharp lines in public opinion. Republican voters were much more likely to take a hard line on deportation, for example, with 74 percent in support of that idea, compared with 56 percent of independents and 32 percent of Democrats. At 85 percent, support is even stronger among Texans who identify themselves as Tea Party voters.

“The harder-line conservatives have shifted this issue by the way they have talked about this issue,” said Daron Shaw, a professor of government at the University of Texas at Austin and co-director of the poll. “The majority of Republican sentiment is moving in a more conservative direction in Texas.” 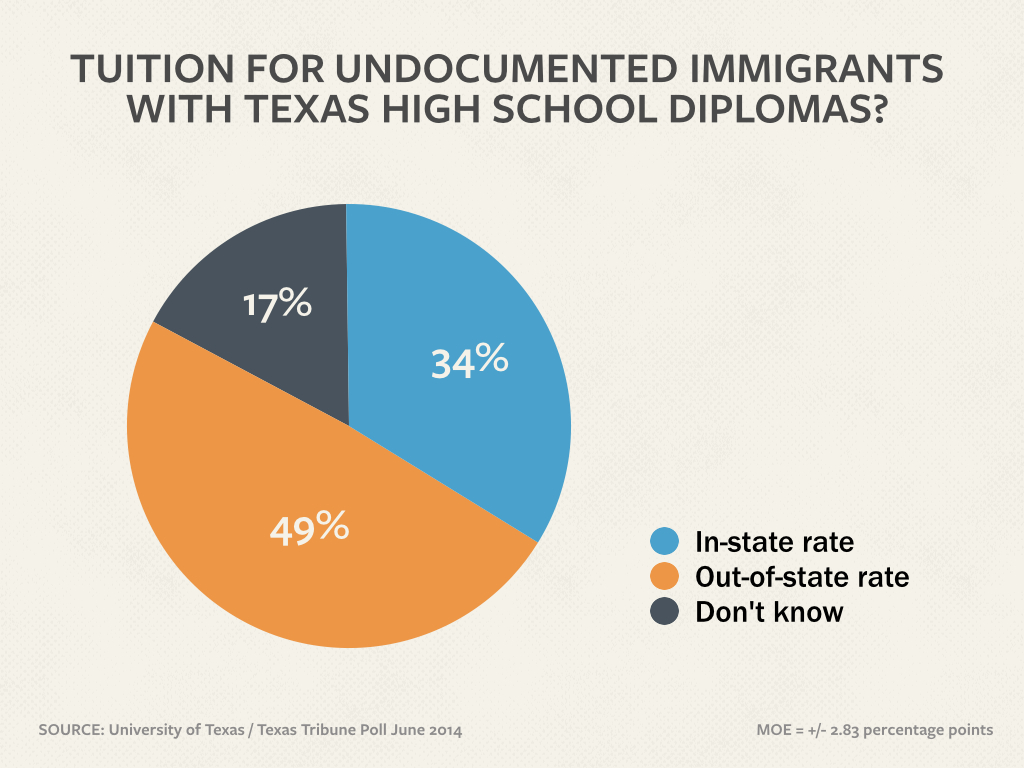 The partisan lines are similar when it comes to tuition, with 54 percent of Democrats saying those undocumented immigrant students should get in-state tuition, while 58 percent of Republicans and 82 percent of Tea Party voters say they should pay the higher out-of-state rates.

Only 34 percent of Texas voters agree that “most immigrants pay their fair share of taxes,” while 56 percent disagree — 40 percent of them strongly so.

A large majority — 73 percent — agree that “we should restrict and control people coming to live in the U.S. more than we do now.” Half of the voters strongly agree with that statement.

At the same time, 60 percent agree with this statement: “Newcomers from other countries enrich Texas with their hard work and values.”

“This tells us a lot about the continuing power of immigration and border politics in Texas,” said Jim Henson, co-director of the poll and head of the Texas Politics Project at UT-Austin.

“You definitely get the sense that the Tea Party is the center of gravity when it comes to concern about immigration in the Republican Party,” he said. “They are more conservative and intense than mainline Republicans as a group. The Tea Party has invested in more restrictive immigration policies. It’s a big part of what defines their concerns right now.” 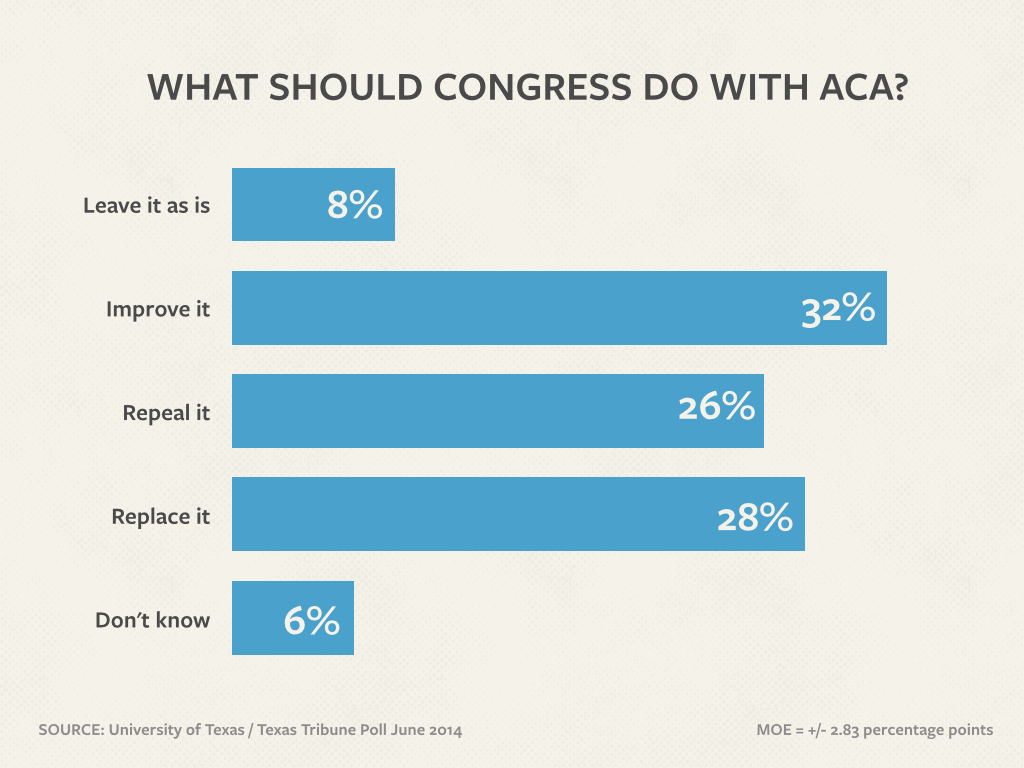 That said, only 26 percent would repeal the law and do nothing to replace it. Only 8 percent would leave the law as is, but 32 percent said their member of Congress should work to improve it and 28 percent want Congress to repeal it and replace it with something else.

“This is the area where I think that the Obama administration has kind of won on this one,” Shaw said. “Only 26 percent really say, 'Let’s go back to what we had.'”

Henson said the numbers indicate a concern about the problem without suggesting a solution to it. Voters seem to agree, he said, that health care needs to be addressed in some way. And he pointed to one unusual result in the poll — a reminder that the sponsor of the reforms, and the reforms themselves, are very unpopular with one part of the electorate.

“The Tea Party crosstab on ‘Leave it as it is’ was zero,” he said. “Call it a pollster’s footnote, but that’s pretty interesting.”

This is one of several stories on the latest University of Texas/Texas Tribune Poll. Thursday: The statewide general election races and a peek at the 2016 presidential primaries. Friday: Texans’ views on various officeholders and candidates, on the state of the state and the country, and on the Tea Party. Monday: Which major party candidates for governor would do a better job on big issues, and most important problems facing the state and the country. Yesterday: Texans’ views on a variety of education issues. Also today: Texas voters on a range of social issues.