Daniel Ortuño pulled a small piece of Texas history from a shelf in a building at the University of Texas at Austin. The yellowing piece of paper said that on Dec. 19, 1951, John L. Boyd began drilling a 1,350-foot-deep oil well through 17 layers of shale and limestone in Crockett County in southwest Texas.

Strolling amid the vast library of oil and gas drilling logs, Ortuño, the collection’s manager for 35 years, plucked another sheet, dated 1938, from a drawer. “Dry and abandoned,” the sheet said of the well.

Few people outside of the oil and gas world care about such records, which fill a corner of the university’s Bureau of Economic Geology building that Ortuño calls his “kingdom.” But those looking to shore up the state’s water supplies are deeply interested. As drought grips most of Texas, researchers are combing the records to map brackish water in the state's 30 aquifers — hidden resources that could help quench the state’s long-term thirst.

Hundreds of quadrillions of gallons of brackish water are thought to lie in the cracks, pores and fault lines below the surface. Though the water contains too much salt and other dissolved solids to be drinkable, many parched towns are interested in making the water usable through expensive desalination technology.

Lawmakers grappling with how to bolster and regulate the supplies face a more immediate hurdle: No one is sure where all the water sits, or how salty it is.

“It’s important for us to try to know that,” said state Sen. Troy Fraser, R-Horseshoe Bay, the chairman of the Senate Natural Resources Committee.

Now, the state’s collection of 1.5 million drilling records — a hodgepodge of those reported to the state and those that drillers have donated — is helping to answer those questions in a project unmatched in its scope, said Sanjeev Kalaswad, part of the four-person project at the Texas Water Development Board.

“We’re attempting to do something that hasn’t been done,” he said.

His team is using the oil and gas logs, water well data and other information to paint a picture of the underground rock formations. Many of the drilling records include measurements of a well’s naturally occurring radiation at various depths and its resistance to electrical current — information that helps experts understand the rocks’ properties, including what kind of water they hold. 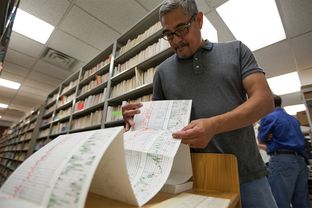 Not all of the records are helpful. Drillers typically bore far below aquifers, and do not always start testing at the surface. The mapping project’s start in 2009 sent Ortuño and a handful of temporary workers scrambling to find the right paper logs to scan into computers.

From there, Kalaswad’s team, which in 2013 grew to four from two, examines each log, determining which data are worth entering into a statewide database made available to the public.

“It’s a lot of human interpretation,” Kalaswad said. “You have to look at each log individually and make your picks.”

Since the Legislature allocated money for the project five years ago, researchers have mapped one aquifer. They determined that the Pecos Valley Aquifer in West Texas holds about 4.9 trillion gallons of fresh water and 27.7 trillion gallons of brackish water. The data collection is helping towns and other local entities figure out where best to build desalination plants.

Two other studies are nearly complete. One looks at the Carrizo-Wilcox Aquifer, which sweeps across Central Texas, and the other examines the nearby Queen City and Sparta aquifers, which are smaller.

How long it will take to map the whole state depends largely on continued support from the Legislature, Kalaswad says.