Five congressional and state Senate primary races will be settled in the May 27 runoffs and we asked our insiders to predict the winners in those contests. Three of those pairings recall the phrase, “Often wrong, but never in doubt.” The insiders overwhelming chose Sen. Robert Deuell, R-Greenville, in the SD-2 runoff and U.S. Rep. Ralph Hall, R-Rockwall, in his May contest in a district that overlaps Deuell’s. Nearby, in Tarrant County, 61 percent think Konni Burton will prevail in the Republican primary runoff for Wendy Davis’ seat in the Texas Senate.

More insiders than not think that Francisco “Quico” Canseco will win the CD-23 Republican primary against Will Hurd, but Canseco hasn’t convinced a majority. And in the CD-36 race to succeed U.S. Rep. Steve Stockman, R-Friendswood, 39 percent picked Brian Babin, 29 percent picked Ben Streusand, and 33 percent said they don’t know how that will come out.

The full set of comments from insiders is attached. Here’s a sampling: 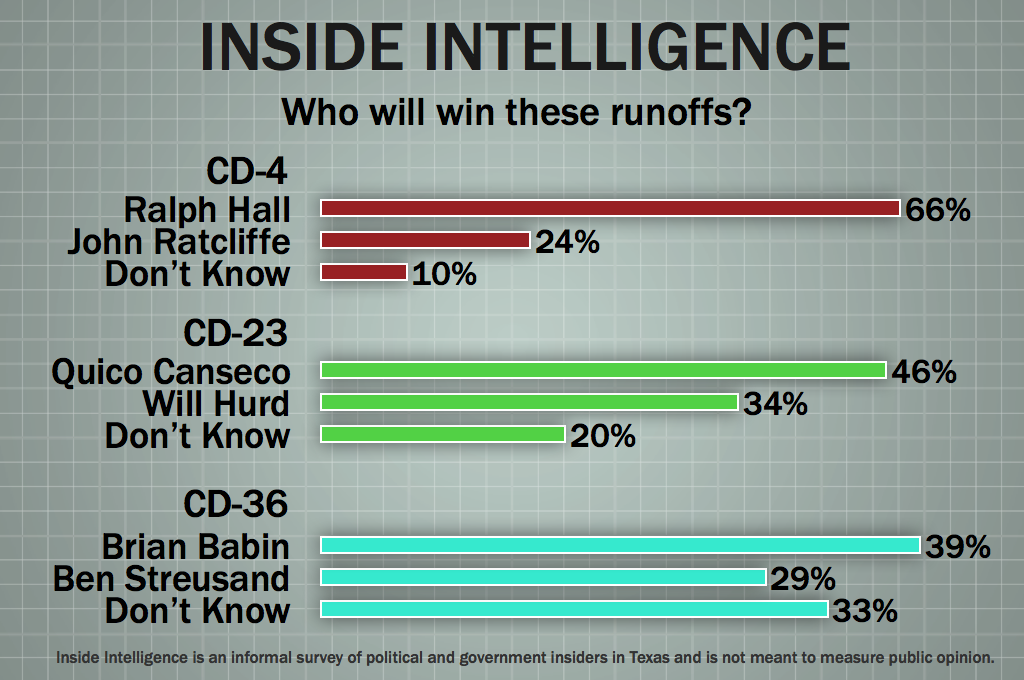 Who will win the CD-4 GOP congressional runoff?

• "Why does a 90-year-old need to cling to a Congressional seat?"

• "Ralph Hall's constituents LOVE him. They'll turn out again to keep him in office."

• "Hall will win but the margin will surprise many."

Who will win the CD-23 GOP congressional runoff?

• "They gave Quico a chance, it won't happen again."

• "Quico needs to go back home"

• "Last time around Hurd had an 11 point lead heading into the runoff and he couldn't capitalized. He has a strong Aggie network in the district, but if they stay home, it'll be Canseco vs. Gallego II."

Who will win the CD-36 GOP congressional runoff?

• "Babin nearly captured this district in 1996. He has deep roots there."

• "Orange County will be the deciding factor in this race and the folks from there relate more to Babin." 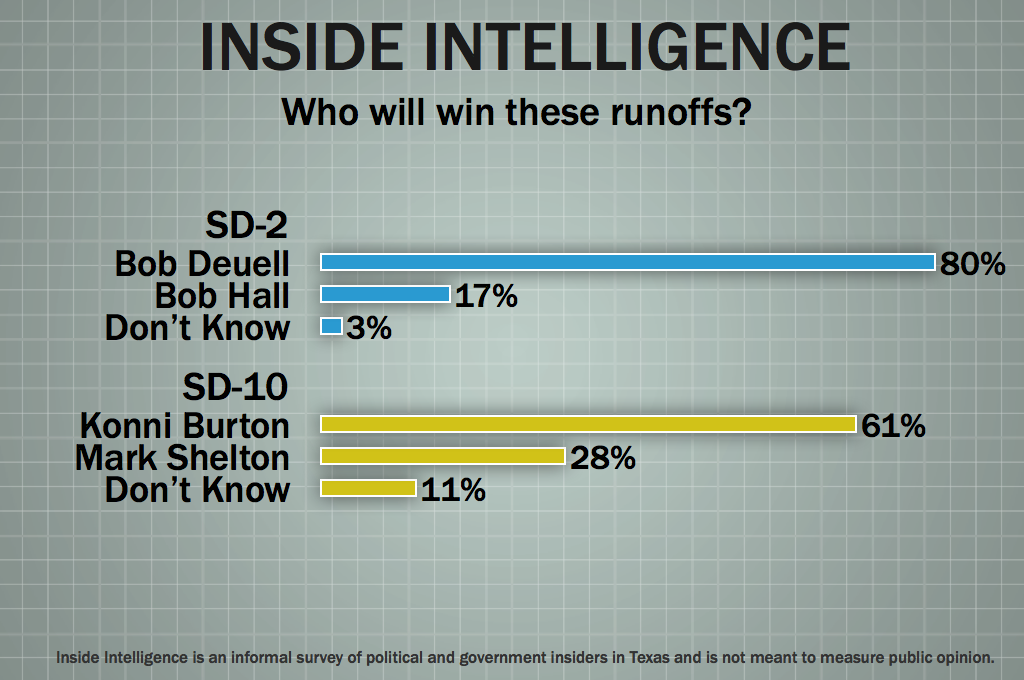 Who will win the SD-2 GOP congressional runoff?

• "Hall's grassroots are motivated and will turn out in the run-off. Deuell defeated himself with a liberal voting record."

• "Deuell has bigger numbers, but it will be close. He may have to explain why he should come back when so many who are more conservative than he will not be."

• "You have to go with the incumbent when you have no clue what you're talking about."

Who will win the SD-10 GOP congressional runoff?

• "Konni is one of the few beneficiaries of an ACTUAL Ted Cruz endorsement."

• "Enthusiasm gap gives advantage to the tea partiers in the runoffs."

• "Aren't we trying hard to make sure no one who has served before comes back?"