After the Republicans running for lieutenant governor held a televised debate, we asked the insiders for a political assessment of the race.

To be quick about it, they think there will be a runoff, and they are skeptical about the electoral chances for the Democrat in the race, Sen. Leticia Van de Putte of San Antonio. Only 24 percent give her a chance of winning.

Lt. Gov. David Dewhurst is the front-runner among the insiders, who chose him and Sen. Dan Patrick of Houston as the two candidates most likely to make a runoff. They also said Patrick was the most likely challenger to knock off the incumbent in a runoff, but then turned around and said he would be by far the weakest of the four Republicans to face Van de Putte in a general election.

We collected their verbatim comments as we went along and a full set of those is attached. Here’s a sampling: 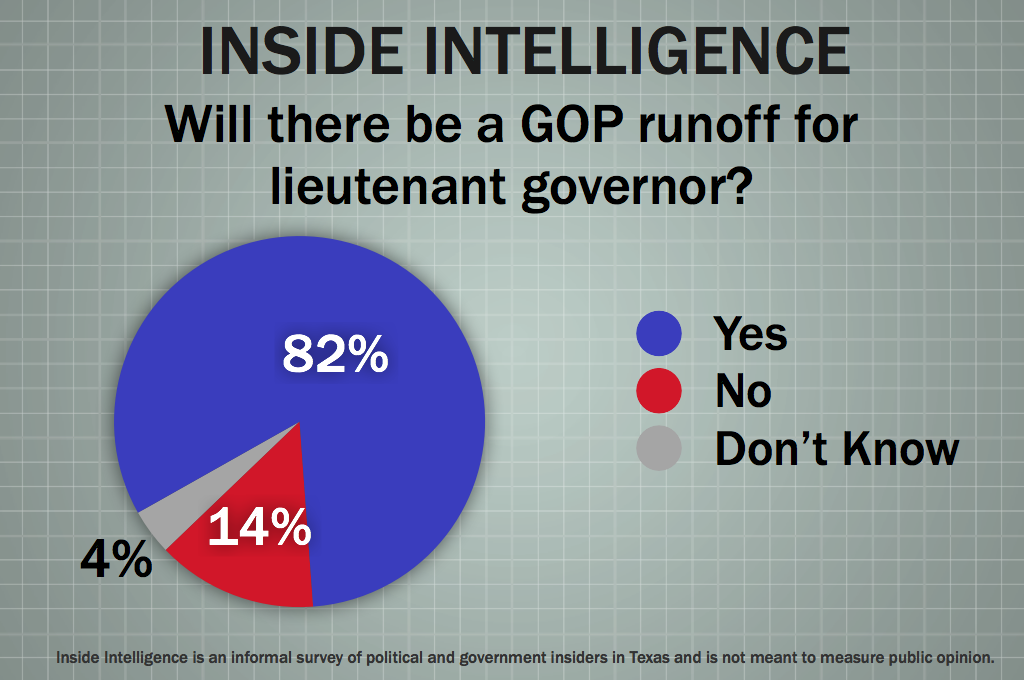 Do you think there will be a Republican runoff for lieutenant governor?

• "With 4 skillful candidates fighting for a single spot on the ballot, 'heading for a runoff' is about the only reliable prediction we can make about this race at this point."

• "Seemed almost certain there would be a runoff a few weeks ago, but the challengers are falling short of expectations."

• "Patrick, Patterson and Staples all have significant constituencies -- enough in total to force a runoff."

• "Dewhurst will likely win outright, IF he opens up his wallet." 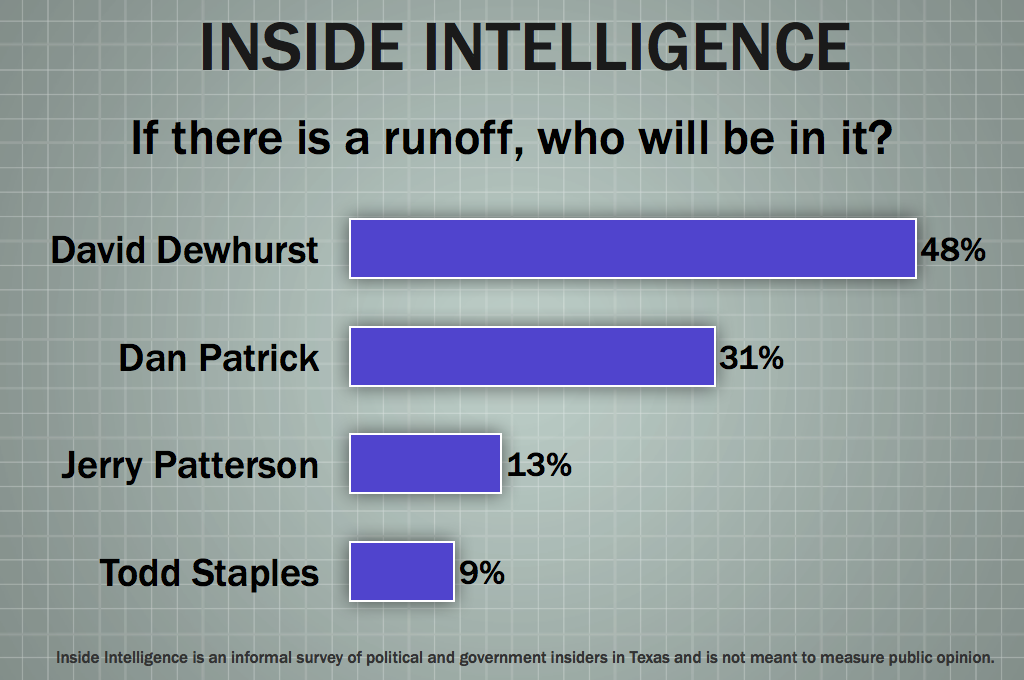 If there is a Republican runoff for lieutenant governor, which two candidates will be in it?

• "Patterson's debate performance will get him a fresh look and more than a few dollars; Patrick's toxic cocktail of piety and moral relativism may have done him in; it's a toss-up whether the establishment will stick with Staples or retreat back to Dewhurst."

• "Patterson will get the most votes in the class clown competition, but won't break 12 percent in the popular vote."

• "Could be either Patterson or Patrick in a runoff with Dewhurst."

• "Patterson and Staples have screwed each other; if only one of them was in the race, they might be able to consolidate the ABP (Anybody But Patrick) opposition. Instead, they will split it and both get less than 15% of the vote."

• "David Dewhurst vs. What's His Name" 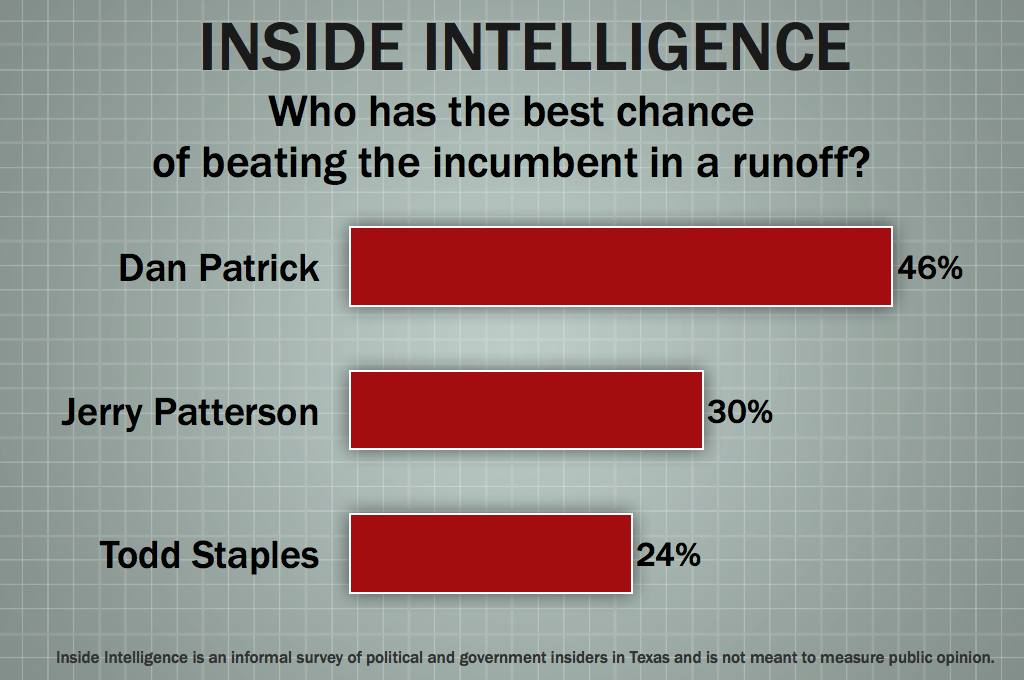 If there is a runoff and David Dewhurst is in it, who has the best chance against him?

• "As the insiders' comments on the last Dewhurst race showed, our group isn't very good at predicting Republican runoffs."

• "The business community would get behind Staples. Early fall, the inside intelligence group was hoping the Dew would resign into the sunset because they wanted a pro-business, level headed candidate to support."

• "I am picking Patterson because he's right for the job and you didn't offer an, 'any of them' option."

• "I used to think any of the three could beat Dewhurst in a run-off. But Patterson and Staples are clearly not ready for prime time. Patrick has the only real shot at beating Dewhurst."

• "Depends on if they have resources. Runoffs are bad for incumbents, so anyone that would make it would probably have a puncher's chance." 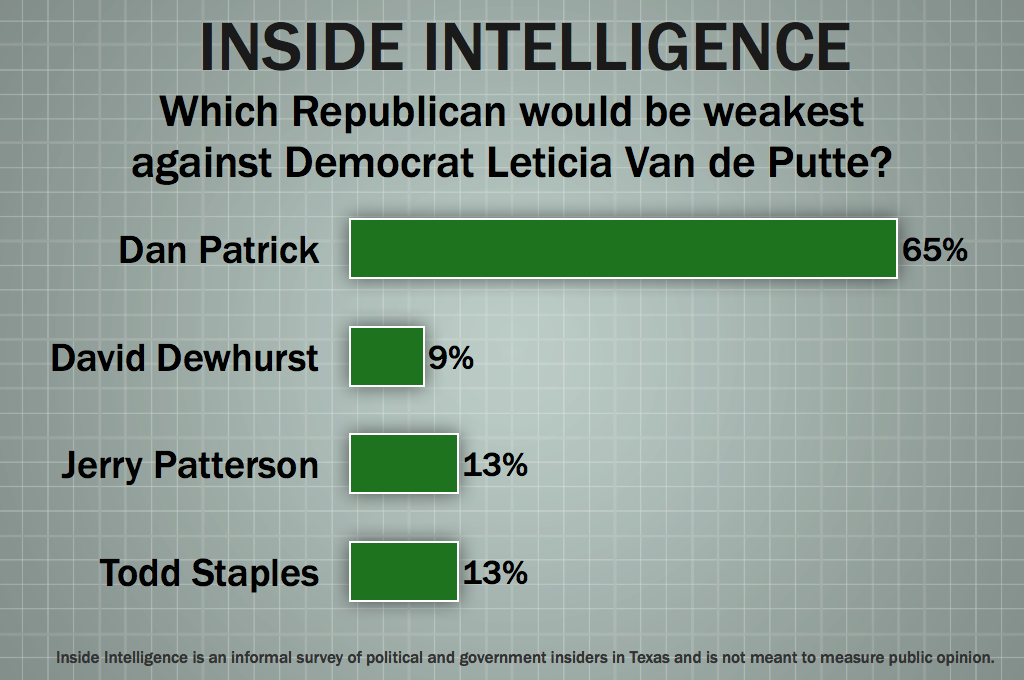 Which Republican candidate would be weakest in a general election race against Democrat Leticia Van de Putte?

• "Weak is relative. Any of the four would still be heavily favored, but Patrick is the most extreme."

• "Democrats are hoping for Patrick and it's not because he would lose, but because he would be the one factor that could speed-up Texas turning blue. Patrick is the Texas Pete Wilson and the one person that can push the Reagan Democrats back into voting for democrats."

• "A D might actually win, if Patrick is the nominee."

• "Hypothetically, it's Patrick. But this is a nonsensical question, because there is a 0.00% chance of the GOP candidate losing."

• "None of the above would be considered weak against her."

• "The contrasts are too powerful for Patrick."

Do you think Van de Putte can win in the general election?

• "Democrats need to have a full slate, including Van de Putte, for 2 major reasons - and the likelihood of winning is not one of them. Reason #1 - A full slate is important for rebuilding efforts. #2 - A Republican candidate might self destruct and hand the seat to a Democrat by default."

• "Texas is very conservative and very Republican and Van de Putte is not nearly a transcendent enough candidate."

• "Not unless Patrick is the nominee, and probably not in that event, either."

• "When Texans learn how LIBERAL she is, they'll turn out for the Republican."

• "VDP is not on the ticket to win. Ds are just using her to get Hispanic and female votes. They could care less about her campaign. Check out her fundraising numbers. There ain't a rich west Austin doctor writing VDP a million dollar check."

• "If all the stars align. She is a far better politician than any of the Rs on the ballot."