SPEARMAN — Inside Mike Skinner’s house in this town in the northern part of the Texas Panhandle is a cage with finches and parakeets — the only livestock he has left, he says, smiling, now that he has sold the family farm.

“My grandfather told me that the only way to stop farming is to die,” Skinner, 67, said.

Last spring he sold the land where he, his brother, his parents and his grandparents had grown wheat and grain sorghum. The farm holds decades of memories: the creepy feeling as a preschool child of reaching his hand under hens to grab eggs, the sound of his grandmother playing Woody Guthrie songs on the  piano. But his family members have died, he has no children, and farming now seems unpredictable and lonely.

Skinner is like a growing number of Texans who are leaving the land because of opportunities in urban areas, a spike in land prices and concerns about  risky weather patterns fueled by a blockbuster drought that continues to plague much of the state. The agricultural workforce is also aging.

“A lot of these guys, their kids have chosen not to come back and farm, and so they don’t really have anybody to leave the land to,” said DeDe Jones, an economist at Texas A&M AgriLife Research and Extension Center at Amarillo.

Small and midsize farms and ranches in Texas — those under 2,000 acres — have been declining at a rate of 250,000 acres a year, according to the Texas A&M Institute of Renewable Natural Resources. From 1997 to 2007, the institute estimates, Texas lost about 1.5 million acres of agricultural land and is expected to lose a million more by 2020.

And while Texas as a whole is growing rapidly, the 96 counties that lost population from 2010 to 2012 are mostly in heavily agricultural West Texas and the Panhandle, the Office of the State Demographer said.

In other areas, urban growth is taking over.

“The scariest thing is what’s happening to the blacklands;  that’s the land that’s being built out,” Billy Howe, the state legislative director for the Texas Farm Bureau, said, referring to cropland that lines Interstate 35, around which the swelling metropolitan areas of Austin, Dallas and San Antonio are clustered.

A century ago, Williamson County, north of Austin, was a top cotton producer. “It’s nothing but houses now, for the most part,” Howe said.

Darren Hudson, a professor of agricultural economics at Texas Tech University, said a decline in population did not always mean less farming. Technological advances have allowed many farms and ranches in the Panhandle to expand, he said, while maintaining production levels with fewer workers.

When land is sold there, “it doesn’t go away,” Hudson said. “Their neighbor gobbles it up, and it gets bigger.”

Prices for agricultural land in Texas have risen significantly, another incentive to those who are considering selling.

But the risks of running an agricultural business have also increased. A tractor or combine can now cost $300,000, meaning an operation must be larger than in years past to justify such a cost, Jones, the A&M economist, said.

“The stakes are just a lot higher,” she said. “We’re going to see more corporate farms and larger farms than we have in the past.”

Jerry Schniederjan, an Amarillo real estate agent who sells agricultural land, said most  family farms and ranches were bought by larger family farms and corporate farms. It has become difficult to make a living on a small farm, he said.

Years ago, when land prices were lower  and farms were smaller, Schniederjan and his wife, Shellie, bought a farm. They spent more than two decades growing wheat, grain sorghum and corn in the Panhandle.

They enjoyed raising their boys on the farm, but since neither son has an interest in farming — Ryan is a pathologists’ assistant in Houston, and Kyle is an engineer in Amarillo — the couple decided to sell more than a decade ago.

“Shellie and I felt like we already had our neck stuck out on a chopping block,” he said. “Farming was good to us, but it was a very, very risky business.” 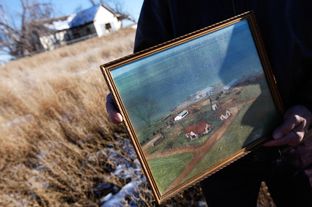 Enlargephoto by: Stephen Spillman
Mike Skinner holds a decades-old aerial photograph of the land near Spearman that three generations of his family had farmed.

Among the risks was the weather. Rural Texans have always had to endure unpredictable weather, but the year that Schniederjan decided to sell saw little rainfall, and the debilitating drought that still persists in much of the state has pushed many others to leave agriculture. In 2011, the driest year on record in the state, Texas’ cattle inventory fell to its lowest level since the 1960s and has still not recovered.

The drought has been especially hard on ranches, because animals need healthy grass to survive. Dell Dickinson, who raises sheep on 7,000 acres of pasture in West Texas near the Mexican border, said he had cut his sheep herd in half in recent years. But he has managed to keep the business sustainable, said Dickinson, whose grandfather bought the land in 1942.

His grown children — a daughter in Houston and a son in Nebraska — do not want to continue the business, he said, so it is likely they will sell the land once they inherit it.

“Without the emotional attachment, there’s basically only one thing left,”  Dickinson, 70, said. “And that’s, ‘Let’s sell it and see how much money we can get for it.’”

In Spearman, Skinner, wearing a blue and gold flannel shirt and jeans, pulls out a framed aerial photograph of the farm from the 1950s.

Through the drizzle is the dilapidated farmhouse, which is in much better shape in the photograph. Gone is the orchard behind the house where the family grew cherries, apples and plums. Skinner’s goats used to keep the weeds at bay, but now they grow waist-high.

Skinner loved experimenting with different varieties of crops, but his problem, he said, was that he never thought of farming as a business, and the market and the weather could not be controlled.

“The bottom line is, it just ain’t no fun anymore,” said Skinner, who said he wanted to live closer to art museums. “You can come out here and listen to meadowlarks, but it might do to trade solitude for a bit of culture.”