For this final Inside Intelligence of 2013, we asked the insiders to predict the ultimate winners of some of next year’s elections.

By a nearly five-to-one margin, they picked Republican Greg Abbott in the race for governor. The next race down is cloudy, however, with the favorite — incumbent Republican David Dewhurst — pulling 35 percent.

More than half predict state Rep. Dan Branch, R-Dallas, will be the next attorney general, and seven in ten pick state Sen. Glenn Hegar, R-Katy, to be the next comptroller of public accounts.

Land commissioner? No suspense, according to the insiders: 97 percent of them think it will be George P. Bush. A similarly large majority — 88 percent — picks Nathan Hecht to win the race for chief justice of the Texas Supreme Court.

Two other races are muddles. While 30 percent pick J Carnes to be the next agriculture commissioner, about a fifth point to Sid Miller and another fifth like Eric Opiela. In the race for railroad commissioner, the favorites were Malachi Boyuls at 40 percent and Wayne Christian at 36 percent.

As always, we collected remarks along the way and a sampling follows. The full set is attached. 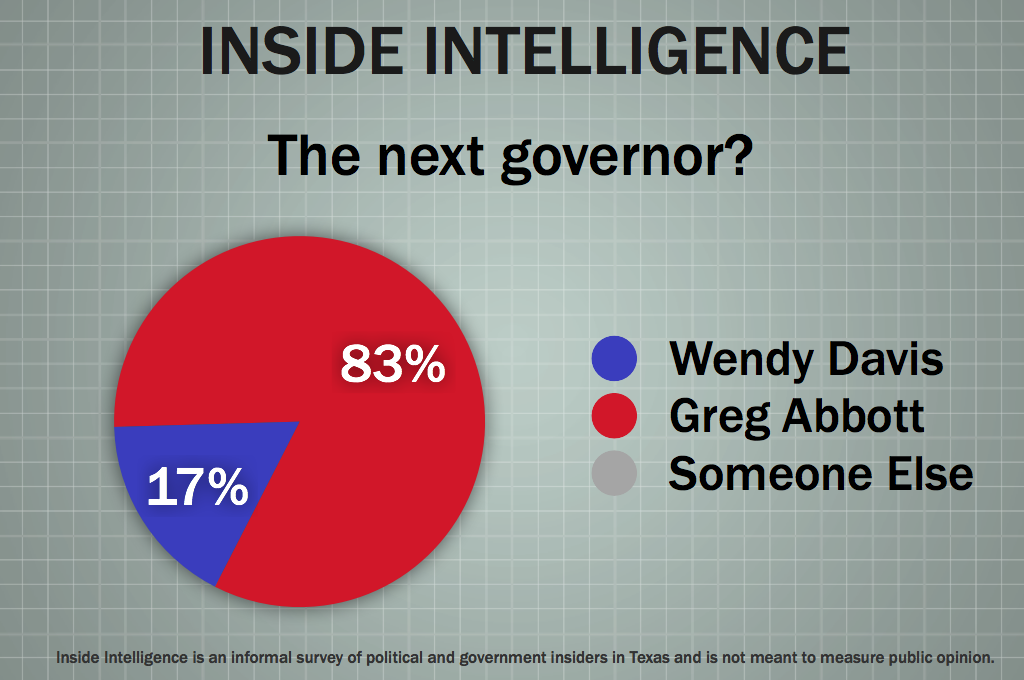 Who will be the governor-elect at this time next year?

• "And suddenly it feels a lot like 1990...everyone remembers the Clayton Williams inauguration right!!!!!"

• "Abbott will make liberals wish they had Rick Perry back."

• "Too much money, too much momentum and too many Republicans."

• "It will be much closer that past elections, but straight party pulls will give Abbott the win."

• "Wendy can't get above 45 or 46 percent and every rational adult in Texas knows it." 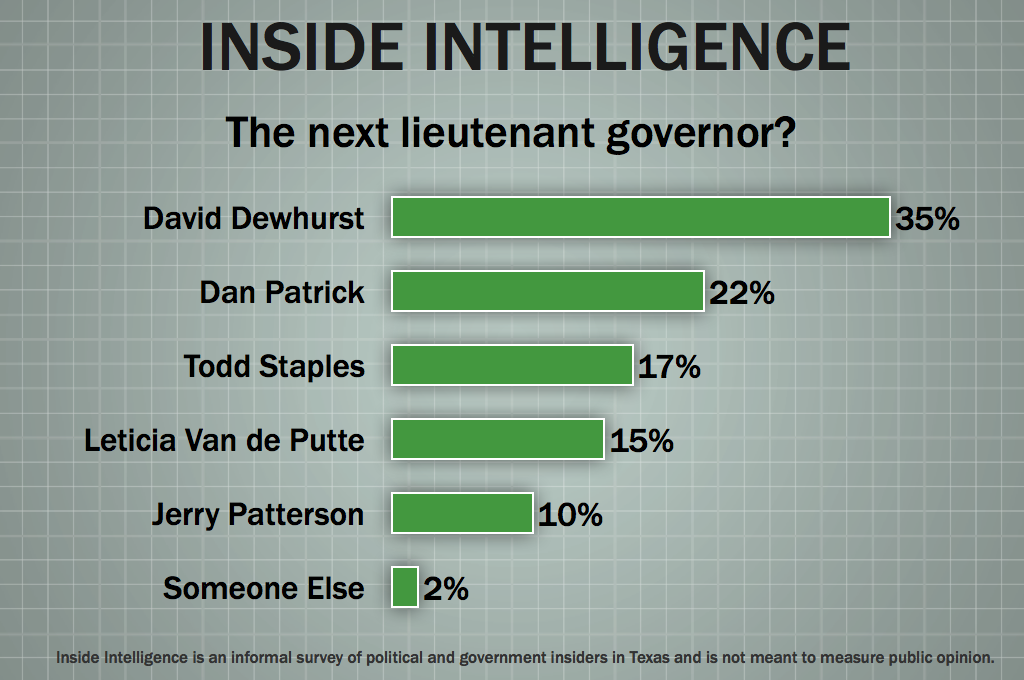 Who’ll be the lieutenant governor-elect?

• "All those women who just can't bring themselves to vote for Wendy Davis will feel redeemed by their vote for Van de Putte. THIS is the race to watch."

• "I can't believe the guy who pissed everybody in the Senate off within two minutes of stepping foot in the Chamber is likely to be its next president..."

• "Who knows, maybe knowledge of Civil War history will be the deciding factor in this race."

• "Van De Putte has a better chance than Davis of winning statewide -- not because she is a Latina, but because the boys running for Lite Gov have behaved like such dolts and even conservative Texans can only take so much hooey. Still Van De Putte and none of the guys on the GOP ticket are Ted Cruz -- ultimately Dewhurst will return." 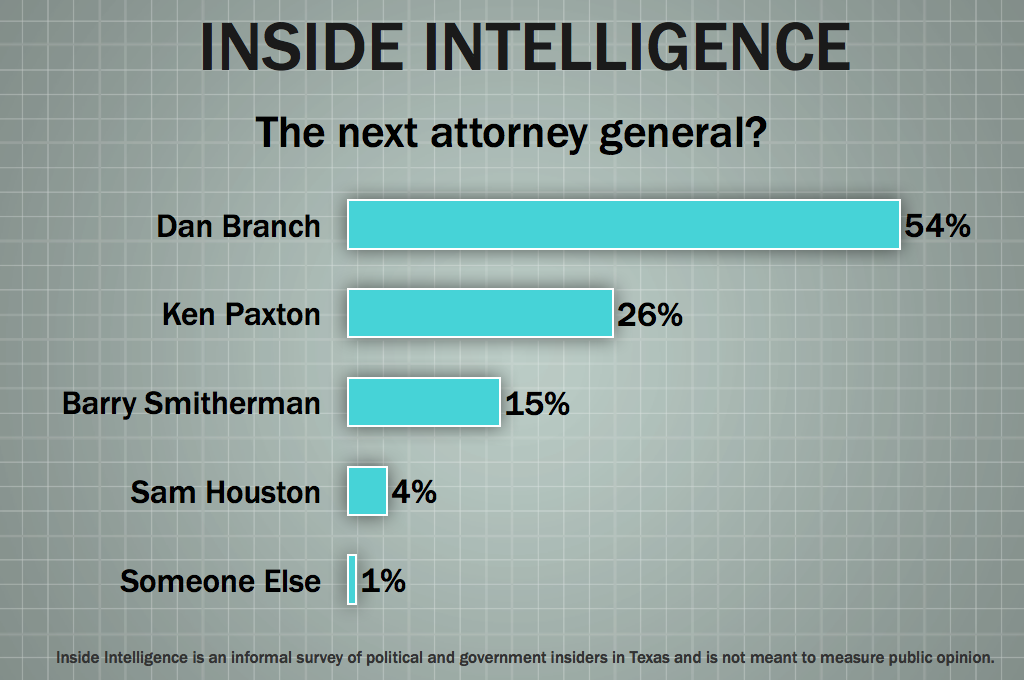 Who’ll be the attorney general-elect?

• "Does Branch's Dallas money and network of state legislators win the day, or does the Austin crowd get Smitherman across the finish line? Stay tuned..."

• "No idea but a lot of the conventional wisdom crowd is betting the farm that the lunatic fringe won't dominate the primaries. Jump ball, that. Branch will likely have the most professionally run operation."

• "Thankfully, the State of Texas is not Collin County writ large. Ken Paxton is about to learn that lesson."

• "Texans want a proven conservative and Paxton's perfect conservative voting record in the House and Senate is most convincing." 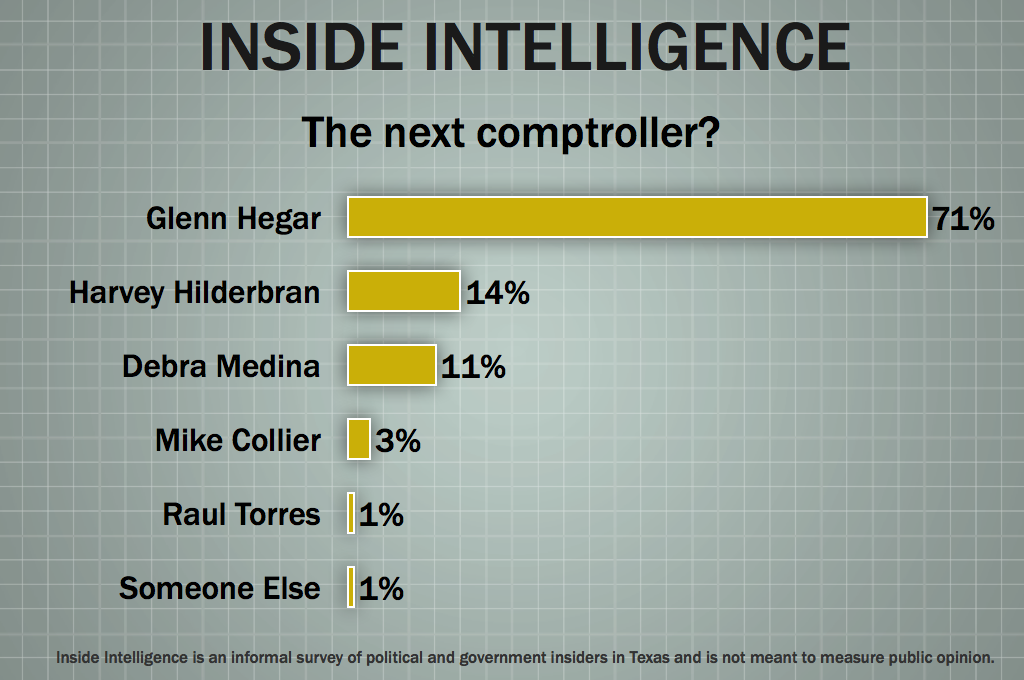 Who’ll be the comptroller-elect?

• "Hegar is the most organized, most polished, and most visible candidate."

• "I am just saying Glenn because all the insiders are telling me his going to win. But, really, no one knows on this one." 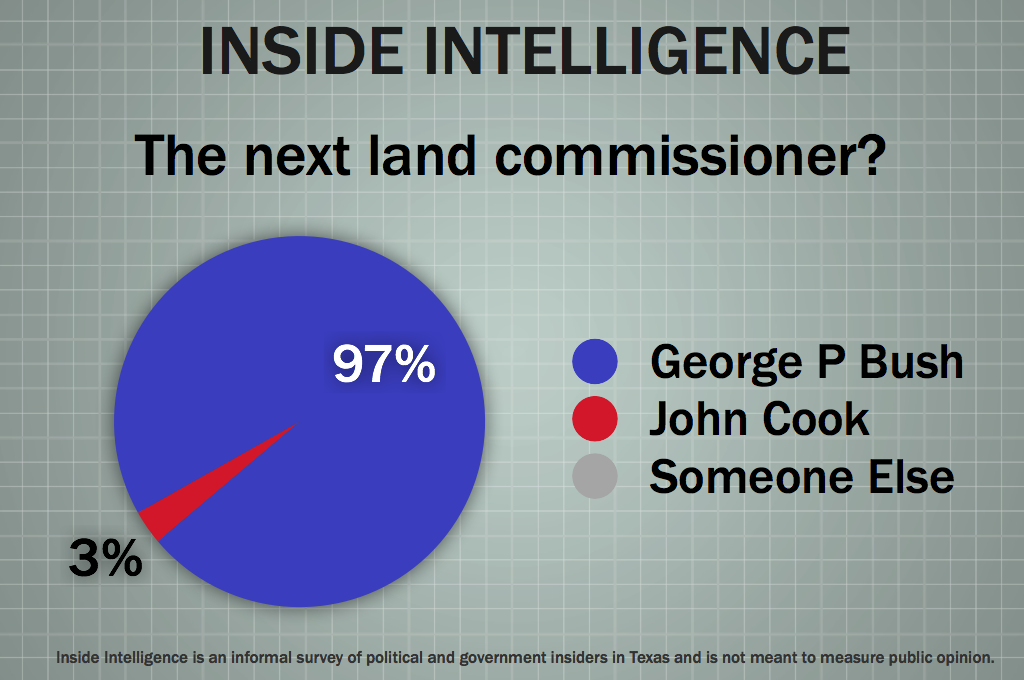 Who’ll be the land commissioner-elect?

• "Didn't we already have this election?"

• "Surprised this question was asked…."

• "The George Bush name is not positive right now."

• "Bush will be the top vote getter in a contested statewide race." 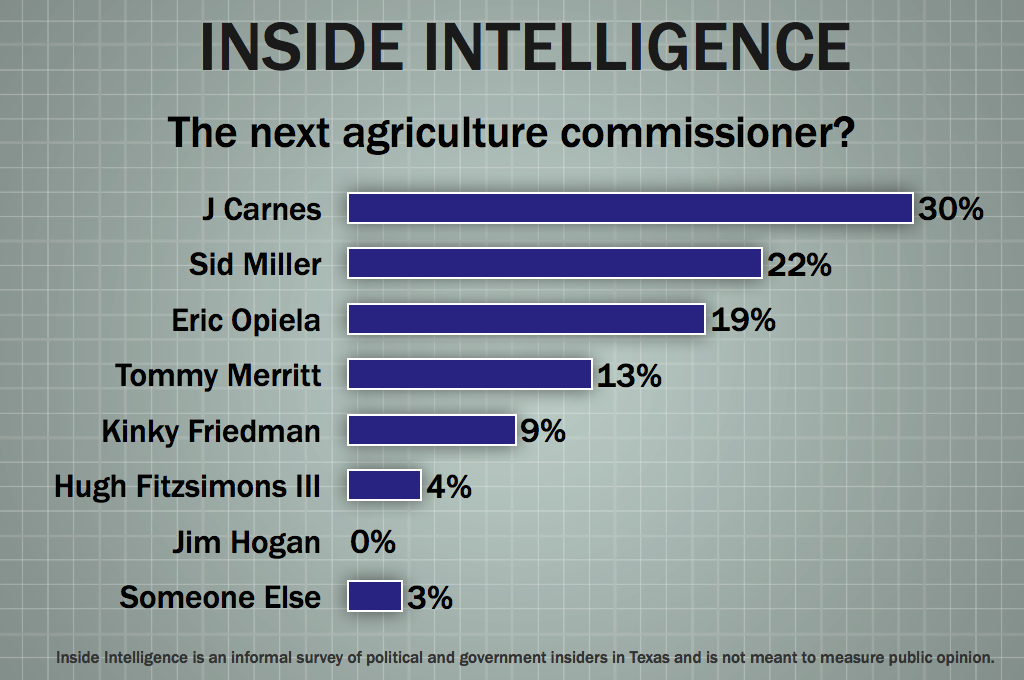 Who’ll be the agriculture commissioner-elect?

• "I wish I could say who, but this is a crap shoot. None have any statewide name recognition, but an R should win it."

• "No matter the outcome, it's the livestock, fruits and vegetables that will be hurt by this election."

• "Kinky is the only name that most people will recognize. No one who goes by 'III' can be a real ag commissioner."

• "Nobody knows, nobody cares" 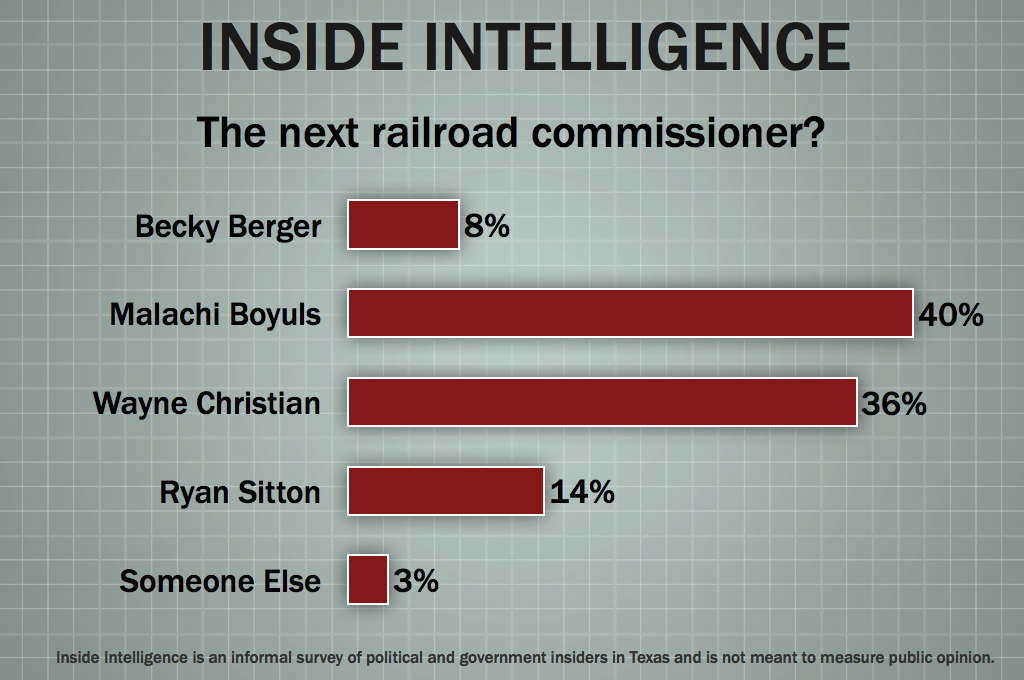 Who’ll be the railroad commissioner-elect?

• "Boyuls has the right experience, the right message, and lots of big-name support."

• "The only one who can rival Sitton's money has the worse ballot name of the year. The legislature needs to address this commission. This is a laughably unqualified slate of candidates for a commission with such important duties. Either appoint the commissioners or break it into multiple regional districts. Either would be better than this."

• "Then we can final change the commissioner to one appointed member." 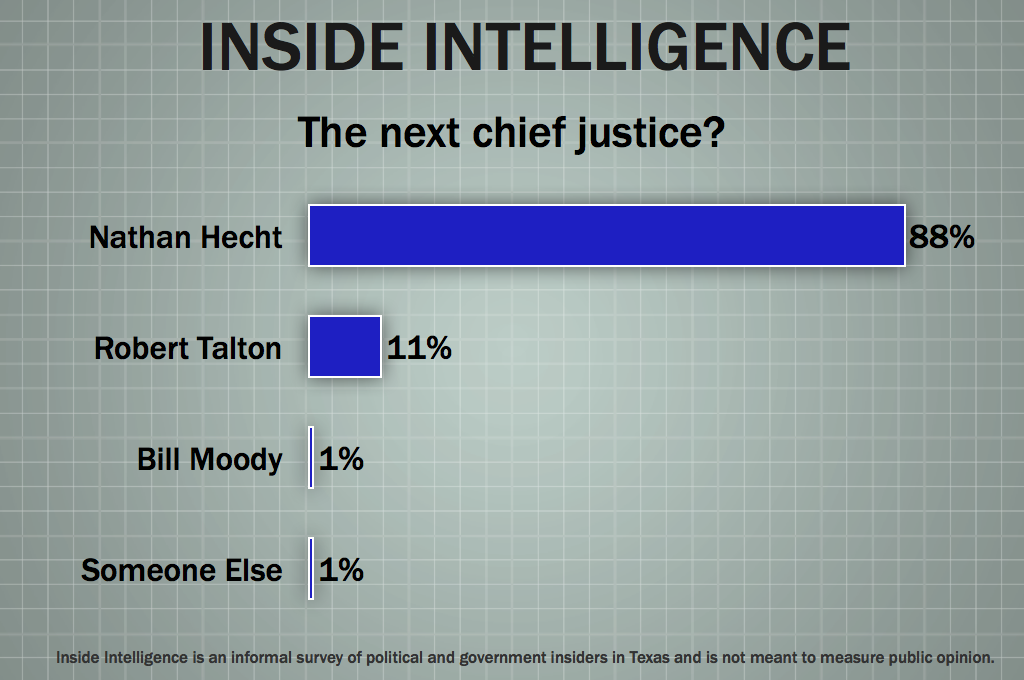 Who’ll be the chief justice-elect of the Texas Supreme Court?

• "Who is going to spend any real money trying to unseat the best Chief in an era of really good Chief Justices?"

• "Moody because he has a great last name to run for office. Again, everyone will be giving you a guess on this question."

• "A disproportionate share of the Houston vote will give Talton the edge in the primary."