Speaking at a mid-November fundraiser at her Dallas antiques and home furnishings store, Lisa Luby Ryan, an eloquent Republican activist, struggled to find the right word to introduce her guest of honor.

“I so hesitate and cringe every time I use the word ‘conservative,’” because its meaning had been watered down by moderates, she said. Turning to Ken Paxton, poised to make his pitch, and raise money, for his bid to be the state’s next attorney general, Ryan said, “Please don’t say you’re the most conservative tonight.”

Paxton, a state senator from McKinney, avoided that phrase, but mentioned his “consistent framework of supporting fiscal and social conservatism.” But Ryan’s instruction underscored the difficult task facing him and his competitors in 2014 as they try to draw attention and drum up support in a crowded Republican primary season full of candidates running to the right. 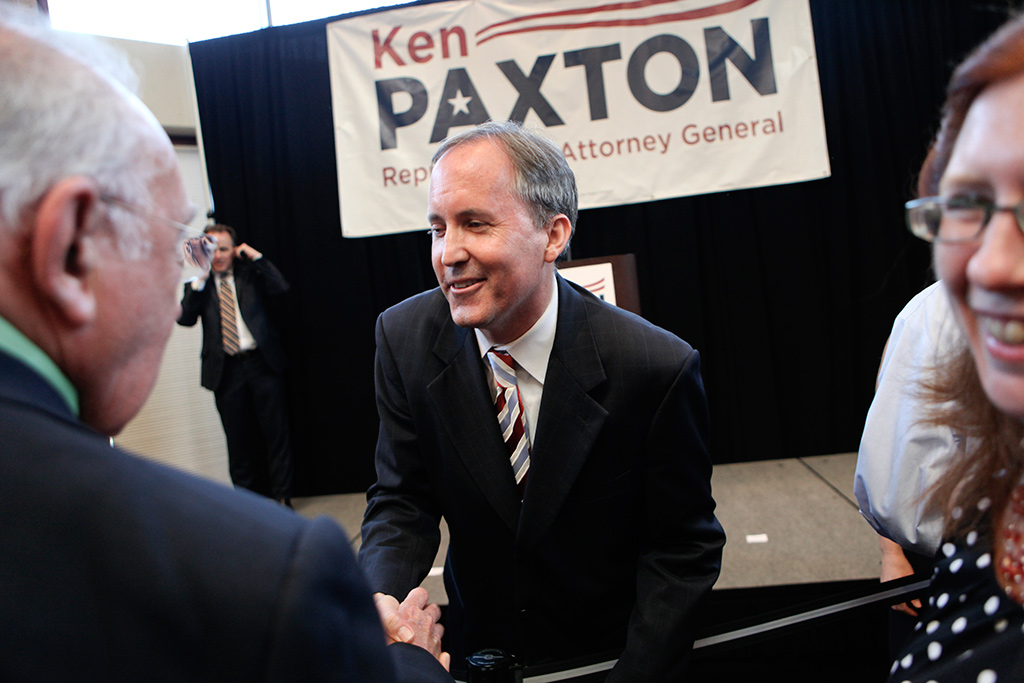 Enlarge photo by: Laura Buckman
State Sen. Ken Paxton speaks to supporters in Plano on Aug. 1, 2013, at his campaign announcement for attorney general.

The national spotlight has already begun to shine on the governor’s race, in which Attorney General Greg Abbott, a Republican, and state Sen. Wendy Davis, D-Fort Worth, are expected to battle in the November general election. But with less than three months before early voting starts, the race to succeed Abbott — which also features state Rep. Dan Branch, R-Dallas, and Barry Smitherman, the chairman of the Texas Railroad Commission — has not caught the general public’s eye.

“There is not a natural shape to the attorney general’s race,” said Cal Jillson, a political science professor at Southern Methodist University. “You’ve got several credible contenders, but none of them are already statewide names. I don’t think that citizens, even Republican primary voters, have yet begun to sort these guys out.”

A University of Texas/Texas Tribune poll released in early November showed that about 74 percent of Republican voters were undecided on the race. And more than a third of participants in an online straw poll recently conducted by Young Conservatives of Texas indicated “no preference.”

Other metrics are hardly more enlightening.

Paxton has won six of six straw polls held throughout the state, which indicates grass-roots support but does not necessarily translate to electoral victory. Neither does having more money in the bank: at last count in July, Branch’s campaign, whose coffers include a donation from former President George W. Bush, had more than twice as much as his opponents. At the outset of the race, Smitherman, having recently run a successful statewide campaign, albeit a lower-profile one, claimed an advantage in name identification among voters.

“I don’t think anybody could call this race right now,” said David Jennings, who writes about conservative Texas politics at BigJollyPolitics.com and has watched the race closely. 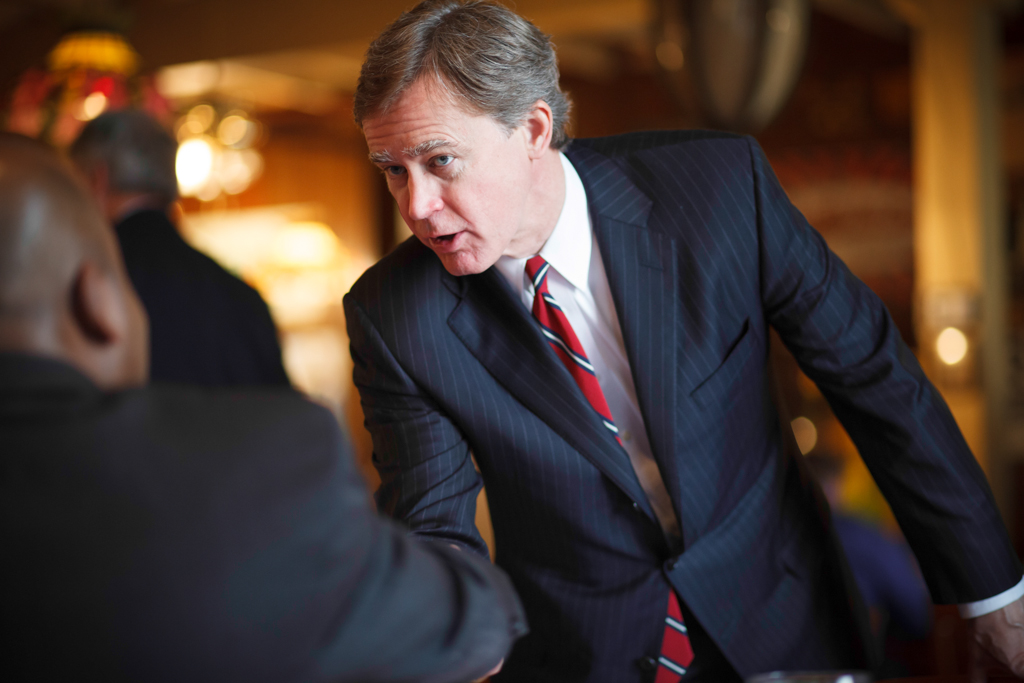 Enlarge photo by: Michael Stravato
State Rep. Dan Branch, who is running for attorney general, speaks to the Pachyderm Club in Houston on Nov. 14, 2013.

All three Republican candidates have pledged to continue the mission of Abbott, who has sued the Obama administration 30 times and, according to Jillson, “made the attorney general’s job in Texas, at least as it is visible to voters, the legal representative of the governor as he opposes federal overreach.”

But beneath such similarities, the three candidates bring markedly different backgrounds and styles to the race. For anyone looking for evidence of a rift between the establishment and Tea Party wings of the Republican Party, Jennings said, “It is sort of playing out in this particular race.”

Speaking last month to the Downtown Houston Pachyderm Club, a local Republican organization, at a Spaghetti Warehouse, Branch emphasized his three decades as a practicing lawyer and extolled endorsements from legal advisers to Abbott and U.S. Sen. Ted Cruz.

“People get that it’s the chief lawyer in the state,” Branch said afterward of the office. “When you go hire a lawyer, most people want a good one. That means someone who has done it a lot, who has practiced a lot.”

Under House Speaker Joe Straus, whom he helped elect to power in 2009, Branch has served as the chairman of the House Higher Education Committee, leading the effort to increase the number of top-tier public universities in the state. His campaign has also promoted his involvement in passing a bill establishing the right of public school students to observe a moment of silence.

“I like to accomplish things,” he said. “I can get stuff done. I’m a conservative, but I like to make sure we get results. We don’t just have rhetoric; we actually move the ball.”

But Branch’s connections to the leadership, derided as moderate by Tea Party activists, have also made him a target, despite his protests that he has “been pushing limited government solutions for a long time, before it was vogue.”

Paxton, a fellow longtime lawmaker who has made a name for himself as an outsider, is a natural foil. In 2011, while still a House member, he excited grass-roots groups with an unsuccessful bid to oust Straus as speaker. “You don’t always have to be on the inside of whatever structure is in charge,” Paxton said in a recent interview. “Leadership can be, sometimes, opposition to Democrats or less conservative or more moderate Republicans.” 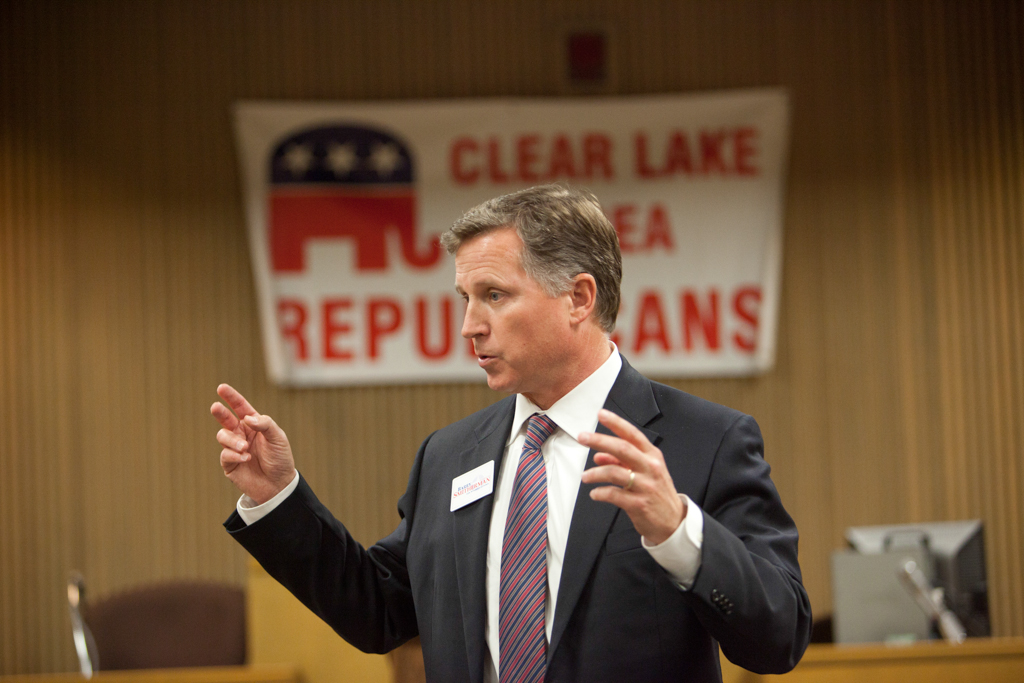 Enlarge photo by: Daniel Kramer
Barry Smitherman at a campaign stop at the Harris County Courthouse Bay Area Annex in Houston on Nov. 19, 2013.

On the stump, both legislators indicated a willingness to continue litigating against the federal government.

“A lot of people in this race, anyone running for office, will talk about fighting Obama,” Smitherman, who has been involved in seven of the state’s lawsuits against the federal administration, recently told a meeting of the Clear Lake Area Republicans. “I’m the only one actually fighting Obama.”

After a career as an investment banker, Smitherman served as a prosecutor in the Harris County District Attorney’s Office before being appointed by Gov. Rick Perry to the Public Utility Commission in 2004, and then to the Railroad Commission in 2011. He served as chairman of both, potentially giving him crossover appeal among establishment and Tea Party conservatives.

“You need a proven conservative leader,” Smitherman told the roughly 30 people gathered in Clear Lake. “Not someone who has been a part-time legislator, but someone who has led large important agencies.”

So far, Smitherman has generated the most media attention, largely for comments some have found jarring. While he insisted that he does not advocate for secession, he has repeatedly said that Texas should operate in a manner consistent with preparation for independence. He also said that most aborted fetuses, had they been born, would be Republican voters.

Barring the entry of another contestant before the Dec. 9 filing deadline, the Republican primary victor will face Sam Houston, a Houston lawyer running unopposed in the Democratic primary.

Houston, who will be considered the underdog, said that after a cursory assessment of his potential opponents, he concluded, “They are all the same.”