Most Texans don’t like the Affordable Care Act, but big majorities like many of its components, according to the University of Texas/Texas Tribune Poll.

The partisan splits are striking. While 73 percent of Democrats have a favorable opinion of the law, 85 percent of Republicans and 71 percent of independent voters view it unfavorably.

“This is something the Obama people have said from Day One — that they’ve got all of these things that test very well,” said Daron Shaw, a professor of government at the University of Texas at Austin and co-director of the poll. “But people don’t like the totality of it.” 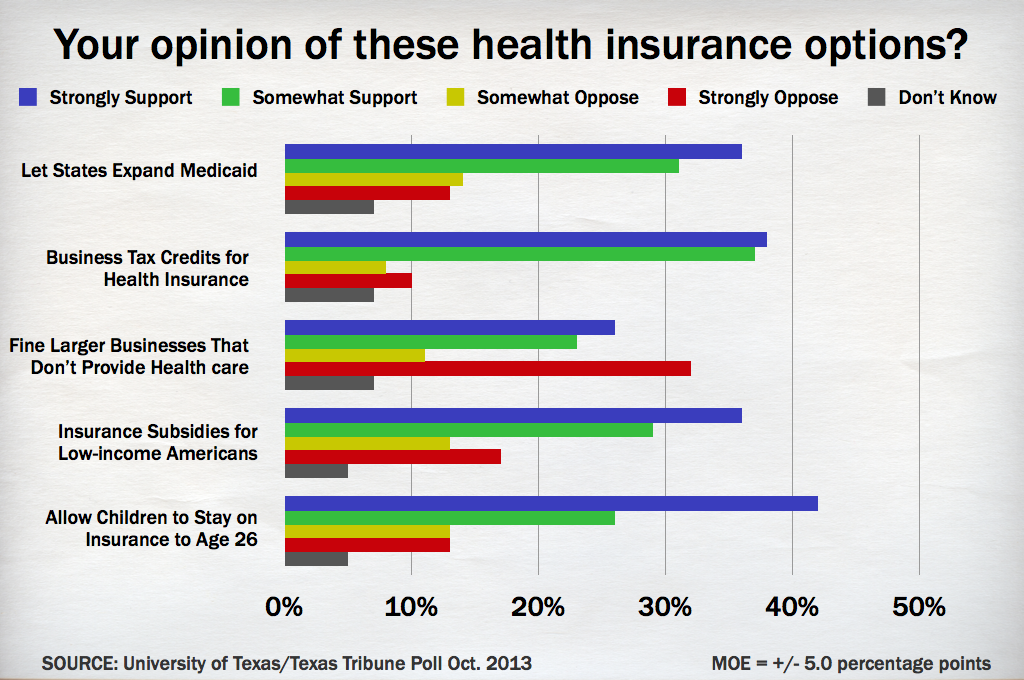 That said, a number of the law’s requirements have a lot of support in Texas. Two-thirds of voters support giving states the option to expand their Medicaid programs for low-income, uninsured adults. That majority spanned the ideological spectrum on an issue that Texas lawmakers ducked last session, opting not to expand that coverage.

Three-quarters of Texas voters like the idea of tax credits for small businesses that offer health insurance to their employees. Nearly as many — 73 percent — support creation of health care marketplaces where small businesses and people without health coverage can shop for it.

Prohibiting insurance companies from denying coverage because of pre-existing conditions has the support of 76 percent of registered Texas voters, and 61 percent, led by Democratic and independent voters, said they would support increasing the Medicare payroll tax on upper-income Americans.

A slight majority of Republicans support allowing children to stay on their parents’ health insurance until age 26, but independents are more strongly in favor and Democrats overwhelmingly support that provision. A slight majority of those who identified themselves as Tea Party voters oppose it. 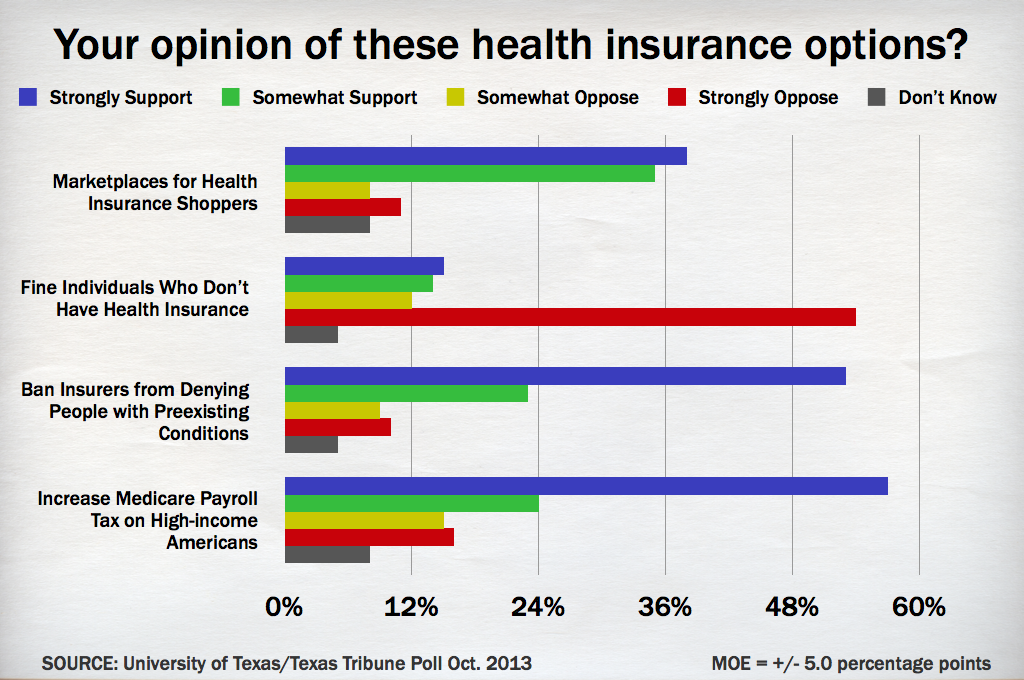 “There is some small-ball stuff that people love,” Shaw said. “Things that really test off the charts are allowing kids to stay on and no pre-existing conditions. If the Republicans are smart, any revision has to include those two critical elements.”

The voters don’t like other provisions, especially fines for individuals who don’t have health insurance by 2014 — 66 percent oppose that, including 54 percent who “strongly oppose” it. A slight majority of Democrats support the mandate, but independents and Republicans are strongly opposed to it.

A provision that would fine larger employers who don’t offer health insurance to workers had the support of 49 percent, but 43 percent oppose that requirement. Democrats and independents support that option, but Republican voters said they were strongly against it.

Two-thirds of voters support subsidies for low-income Americans without health insurance, but that support is split along ideological lines: Liberals strongly support it, while conservatives oppose it.

“The only thing that really begins to generate a significant degree of rejection is requiring large businesses to provide insurance, and the individual mandate,” said Jim Henson, who runs the Texas Politics Project at UT-Austin and co-directs the poll. “You get more division where you introduce class items, but on a bunch of other things, there is a lot of consensus.

“The problem is that the unpopular parts of the program are critical to its overall success,” Henson said.

Texans' views on abortion remain about where they have been over time, with 12 percent saying abortion should never be permitted and 29 percent saying it should be allowed only in cases of rape, incest and when the mother’s life is in danger. Another 16 percent said the law should permit abortions in other cases “after the need for the abortion has been clearly established,” and 37 percent would allow abortions as a matter of personal choice.

This is one of six stories on the latest University of Texas/Texas Tribune Poll. Also today: the mood of the state. Yesterday: Ted Cruz and the 2016 race for president. Tomorrow: Texans’ views on immigration.