With four Republicans vying for lieutenant governor (no Democrats, yet), we asked the insiders what might happen to the Senate’s rules and traditions, depending on who wins the race. We included Democratic Sen. Leticia Van de Putte of San Antonio, who is openly considering the race, along with Lt. Gov. David Dewhurst, state Sen. Dan Patrick of Houston, Agriculture Commissioner Todd Staples, Land Commissioner Jerry Patterson and “a Democrat” as a placeholder.

The short form: The insiders don’t expect dramatic changes unless Patrick is elected. With the others, they don’t expect major changes in the rules, do expect committee assignments to mirror the partisan mix of the Senate, expect the lieutenant governor to maintain traditional control of the agenda and don’t think senators will change the rule that most of the time requires approval from two-thirds of the senators before an issue can be debated.

In each of those four cases, the insiders think the election of Patrick would prompt changes. There were a few differences based on party. Insiders were less certain that senators would leave the calendar in the hands of a Democrat in the presiding officer’s chair, but more than half thought they would. And a greater number thought the rules might change with a Democrat in charge; again, that group didn’t make up a majority.

We collected comments along the way and a full set of those is attached. A sampling follows: 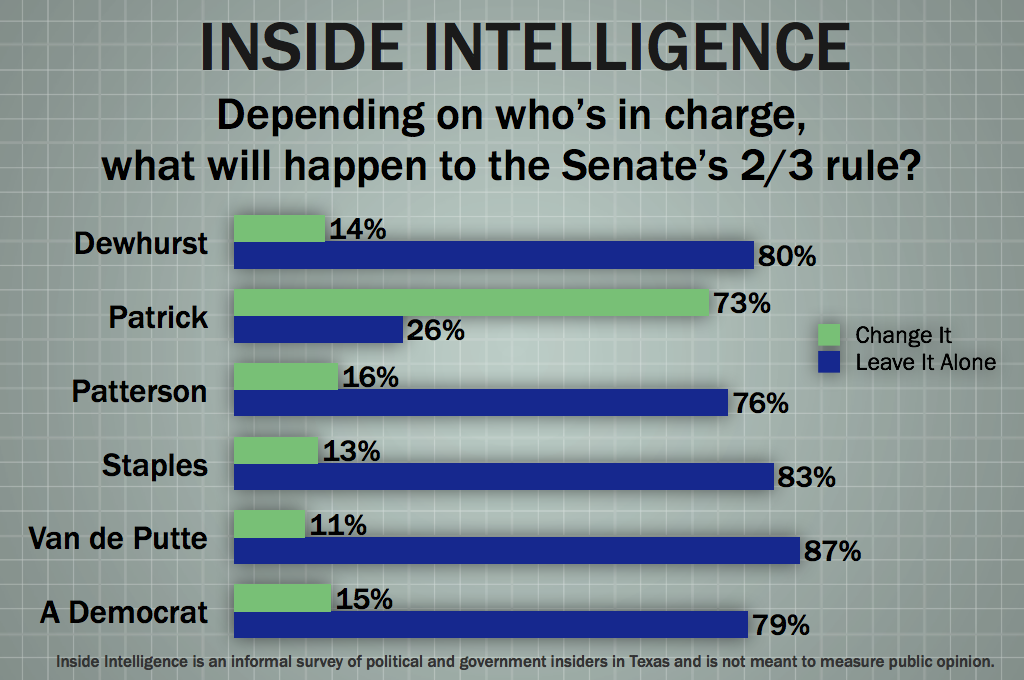 Depending on who is elected, will the Senate change its 'two-thirds rule' or leave it alone?

• "Dewhurst is doing all he can to pander to the crazies in his party (don't think it will help him!) so he would probably change it. Patrick will for certain change it. Patterson, having served as a senator, will understand the detriment of changing the rule - since the Democrats will again become the majority party some day in this state. Staples - not certain - he served as a senator, but he also might want to give in to the crazies. VDP keeps it as is."

• "Senate will ignore any attempt by Patrick to change the rule."

• "For the GOP be careful what you wish for. Some day we might be sorry the 2/3 rule is abolished when the democrats take over."

• "The senate members will change the rules relating to the powers of the Lt. Gov depending on what candidate is elected but I think the 2/3rds rule stays in place."

• "May not have to do anything if a D doesn't win the Davis seat or pick up a seat elsewhere." 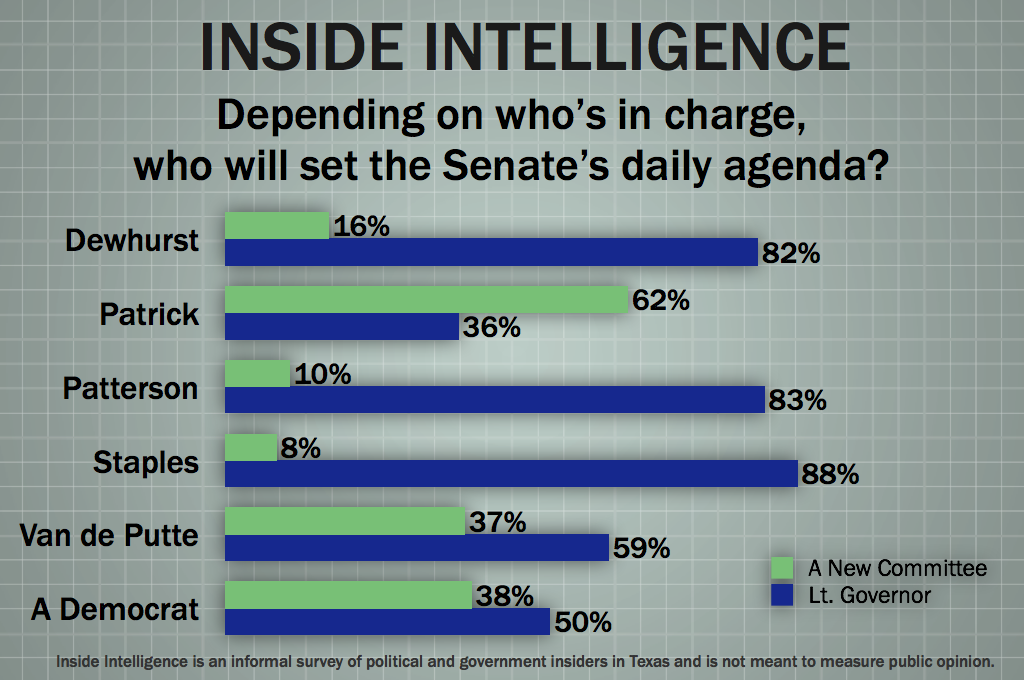 Depending on who is elected, will the Senate leave the lieutenant governor in charge of the daily agenda or create a calendars committee to do that?

• "The senators risk backlash if they try to strip the Lt. Gov of this power. They would only dare do it if a fringe candidate (Patrick) or a Democrat were to win."

• "If elected, Dewhurst or Patrick will find their powers significantly cut by the Senate."

• "That committee is dysfunctional, worse than 60%."

• "If Dan Patrick is elected, the office of Lt. Gov. will be stripped of its powers in ways never contemplated before." 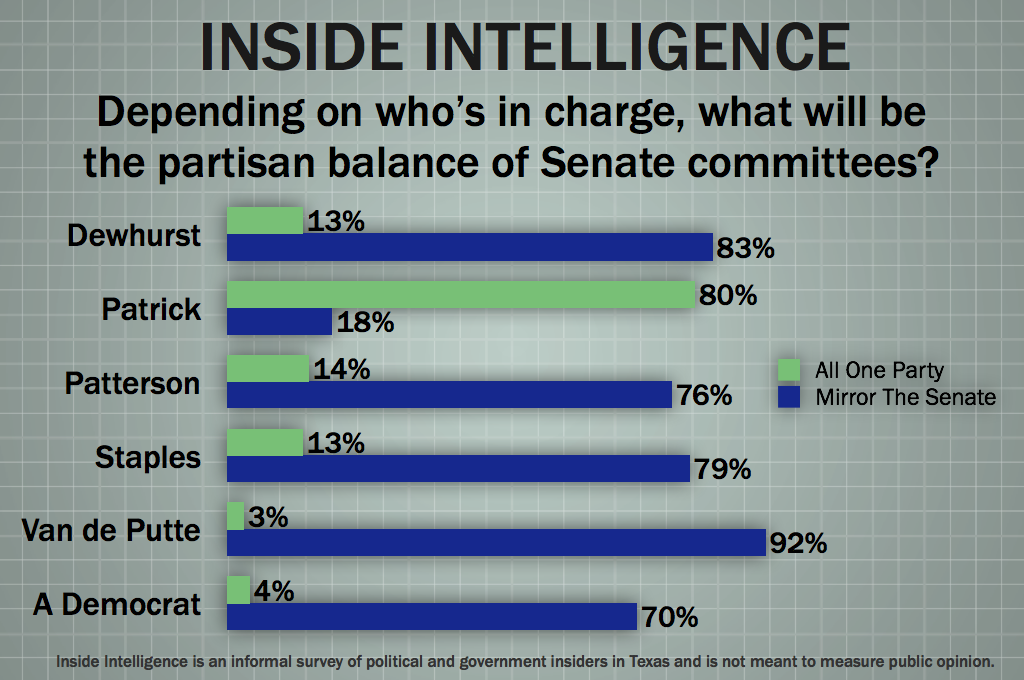 Depending on who is elected, will Senate chairmanships mirror the partisan mix of the Senate, or will all of the chairmen be members of one party?

• "The success of the Senate, historically, is its comity. True, for most of its life it was in a Dem stranglehold, but there was division between conservative Dems and liberal/progressive Dems. But whoever the Lt. Gov. was, he split chairmanships. In later years, so did Hobby, Bullock, Perry, Ratliff, and Dewhurst."

• "Not certain whether committee chairmanship appointments will be left in the hands of Lt. Gov. if certain candidates win."

• "Not necessarily mirror the partisan mix mathematically, but the Ds will get some sop somewhere."

• "Absolute power in the hands of one party in a legislative body does not work. Exhibit A: Washington DC" 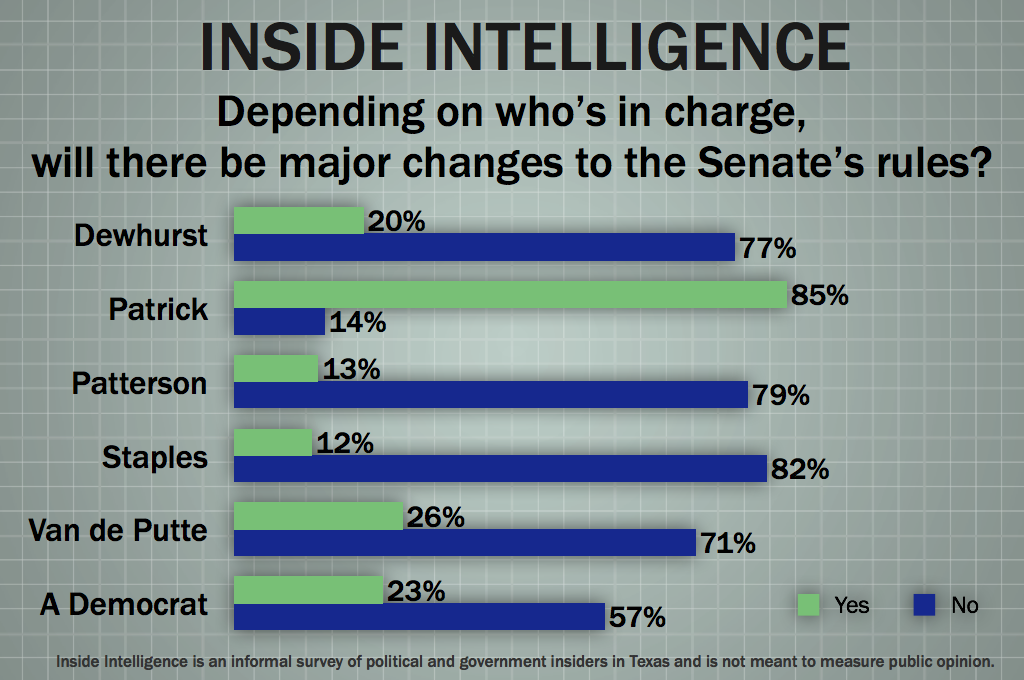 Depending on who is elected, will the Senate make major rule changes or leave things mostly as they are now?

• "The Senate wants to stay the same, but if they do not have confidence in the Lt. Gov (fringe candidate or a D wins), they will make changes to protect themselves and the chamber."

• "Patrick realizes the Lite Guv derives his power from the Senate Rules, right? If he chaps enough hides, they'll strip some powers, like setting the calendar (see above question)."

• "The Senate is all talk on changing the rules. Short of a Democrat winning Lt Gov versus a supermajority of Republicans, the rules won't change."

• "Bottom line is that DP or any Democrat will mean serious changes to the way the Senate conducts business. And not for the better."