The new University of Texas/Texas Tribune Poll on a constitutional amendment creating a new water fund invites attention to the hazards of interpreting polling numbers when we expect low voter turnout. In this case, using voter screens to assess just what the electorate might look like helps us interpret the poll.

The UT/TT Poll found 52 percent of all respondents in favor of Proposition 6, 19 percent opposed and 29 percent either not intending to vote or unable to express an opinion. (The survey was undertaken with support of the Meadows Center on Water and the Environment at Texas State University.)

The Nov. 5 constitutional vote will almost certainly be a low-turnout election. While water has been a source of almost universal interest among policymakers, there is little indication that it has captured the attention of the general public.

The outcomes of low-turnout elections are notoriously tricky to predict — as primary elections periodically remind campaign pollsters, candidates and the public. In Texas, constitutional elections are often the lowest of low turnout affairs, as the accompanying chart illustrates. Where 11.6 percent of the voting-age population voted in the 2010 primaries — a number you might consider meager — only 3.8 percent of the voting-age population turned out a year later for the 2011 constitutional amendment election — a little more than 690,000 voters.

With turnout so low, a surge by a relatively small number of voters that wouldn’t make a significant dent in the results in other types of elections can swing a constitutional election toward an unexpected result. 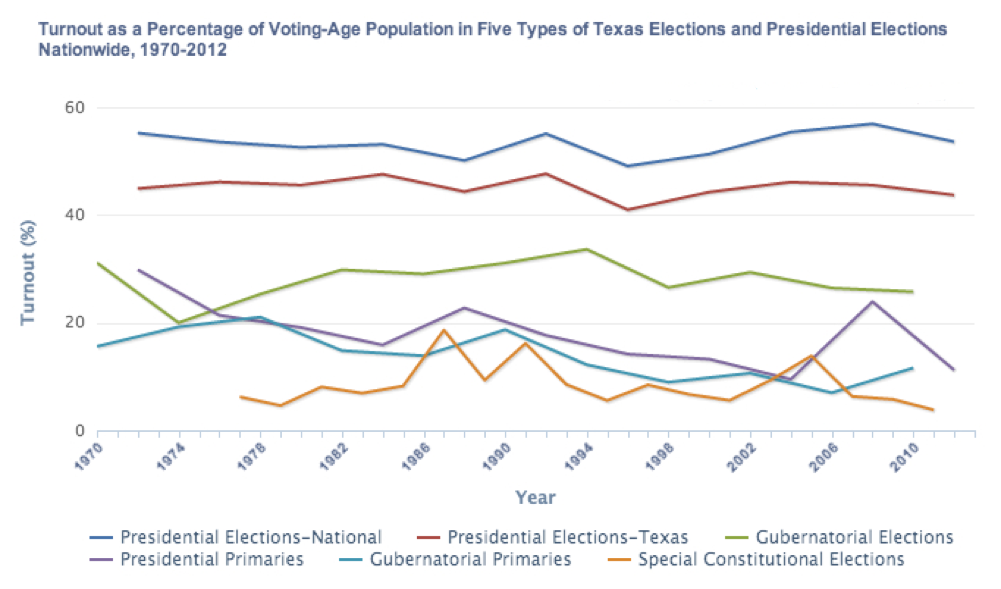 With the voters (or some of them, anyway) now in the driver’s seat, a polling result showing a thin majority supporting the measure — even with a wide margin — might be cause for concern to the business and trade groups, environmental groups, and legislators who mounted a sustained, multi-year effort to craft and pass a water bill.

The measure’s champions should take a deep breath before panicking. Figuring out what the actual electorate is going to look like in any election calls for building a likely voter screen — a set of criteria by which we filter out people who don’t express enough of a voting habit, interest or engagement to be expected to vote.

To this end, we asked the survey respondents a lot of questions useful for screening out unlikely voters in the upcoming election: their vote history, their interest in politics, how closely they followed the Legislature and how much they’ve heard about the constitutional amendment elections. We used combinations of the questions to construct 18 voter screens. Each of these screens lead to the same conclusion: As of Sept. 27-Oct. 4, when the survey was conducted, the water measure looked very likely to pass. 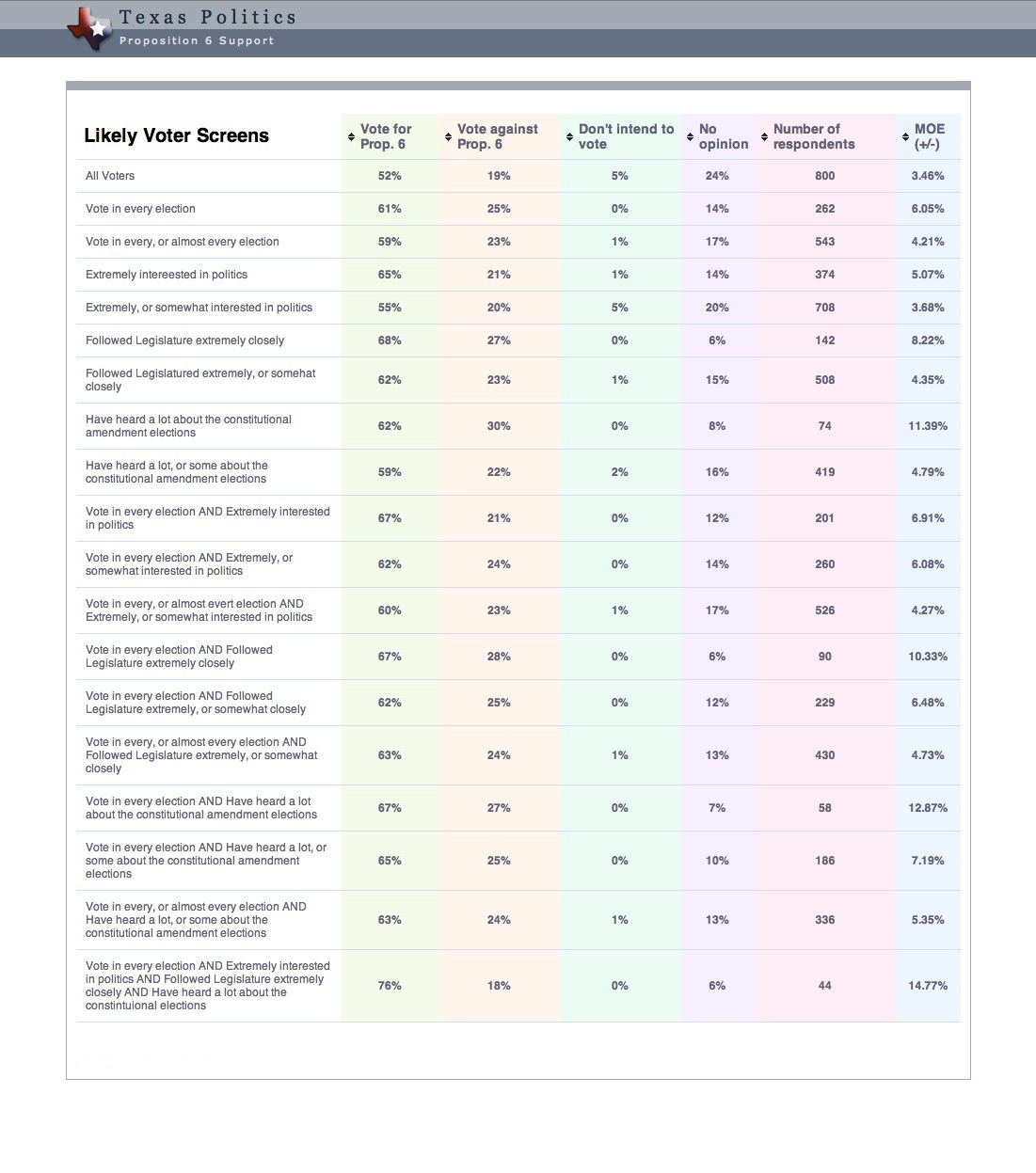 Examining the possibilities, two things are apparent (a printable copy of the charts is attached). First, as the screen gets tighter, support for the water measure increases. Second, the three most reasonable screens — including some combination of voting in every election with either being very interested in politics or following the Legislature extremely closely or having heard a lot about the constitutional amendment elections — each show 67 percent of voters approving the ballot measure.

In practical terms, the paradox of such a finding in a low turnout election is that it is may generate bad expectations on both sides of the proposition. For opponents, of course, these numbers show their preferred outcome lagging far behind in public opinion. Neither low nor high turnout is likely to have an impact on the outcome. Only a huge shift in public opinion would tilt the outcome to failure.

But the nature of a low-turnout election may make proponents feel a twinge of unease, too. Advocates can be expected to guard against the possibility that their supporters may feel over-confident and join the mass of nonvoters, threatening what appears to be a comfortable margin. So don’t expect the boosters to make too much of this; do expect to keep hearing from them through Election Day.