The talk of the moment has centered on next year’s race for lieutenant governor, what with the Republican candidates starting what will likely be months of debates and forums and the Democrats talking about whether Sen. Leticia Van de Putte, D-San Antonio, will jump into the second spot on the ticket.

We started there, and found our insiders divided 41 percent to 42 percent on whether she will run. They came back together on the question of whether the Democrat could win the general election, though, with 81 betting against her.

The Republican candidates, in a Houston forum, squabbled over Lt. Gov. David Dewhurst’s appointment of Democrats to a third of the Senate’s chairmanships. Assuming a Republican wins the 2014 elections, 37 percent of the insiders expect the number of Democratic chairmen to fall and only 2 percent expect an increase; 46 percent think things will remain the same.

Dewhurst has said consistently that he will run for reelection, but speculation that he might drop out prompted use to ask who would benefit. Just under half of the insiders said Agriculture Commissioner Todd Staples would get the nomination, while Dan Patrick got 27 percent and Jerry Patterson got 18 percent. [Note: Here’s a great read from the Texas Tribune’s pollsters on the limitations of nonscientific surveys like this one.]

A related question on fundraising went the same way, with 55 percent saying Staples would raise the most money in a race without the incumbent, followed by Patrick at 34 percent.

We asked for comments along the way and have attached a full set of them. Some excerpts follow: 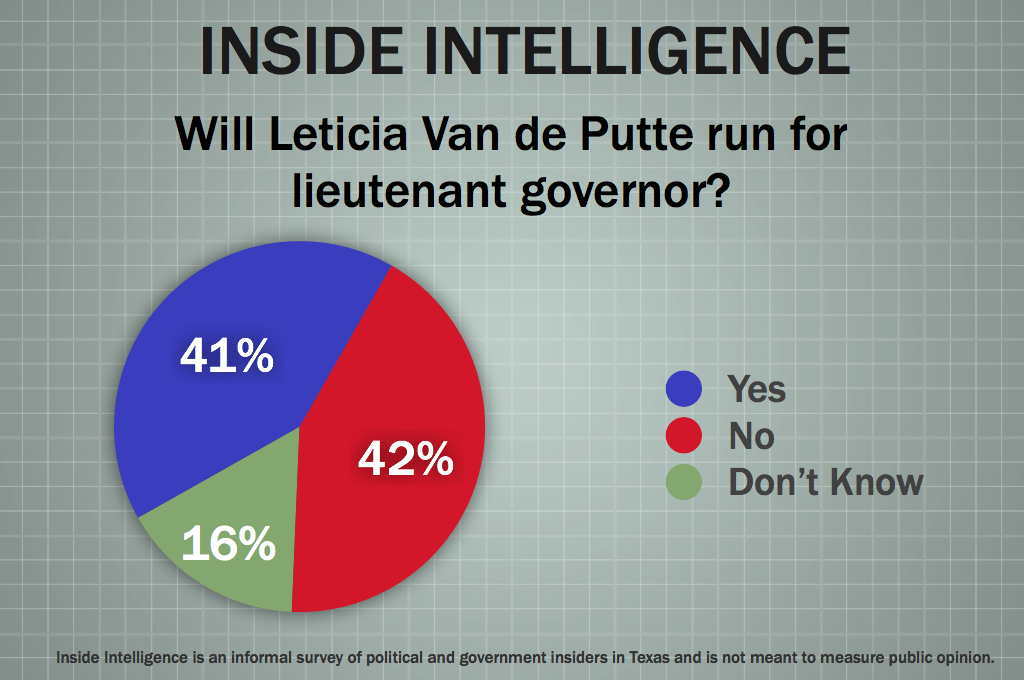 • "Unless the Ds are privy to polling data no one else in TX has seen, why would they risk losing an experienced D in the Senate?"

• "Most of us who know LVD, like her. A lot. We also know that she's experienced an especially calamitous year. I suspect that she could use her heart more than her head on making these big-ticket item decisions. So there's more of a wildcard in play here. Life and opportunity are fickle and fleeting."

• "Ultimately no.  If she has higher aspirations but doesn't take defeat well, this is not the race to get into. If the goal is to raise her state name ID for a potential race down the road, it's a calculated risk. Don't want to lose too many times."

• "I sure hope she will run sand I hope Davis runs the race for governor so the Dems will plow money into both races and take a loss.  Then they have less money to spend in other places.  Run baby run!"

• "Sen. Van de Putte would be an excellent Lt. Gov., but it would be a severely uphill battle. I would hate to lose her as a Senator!" 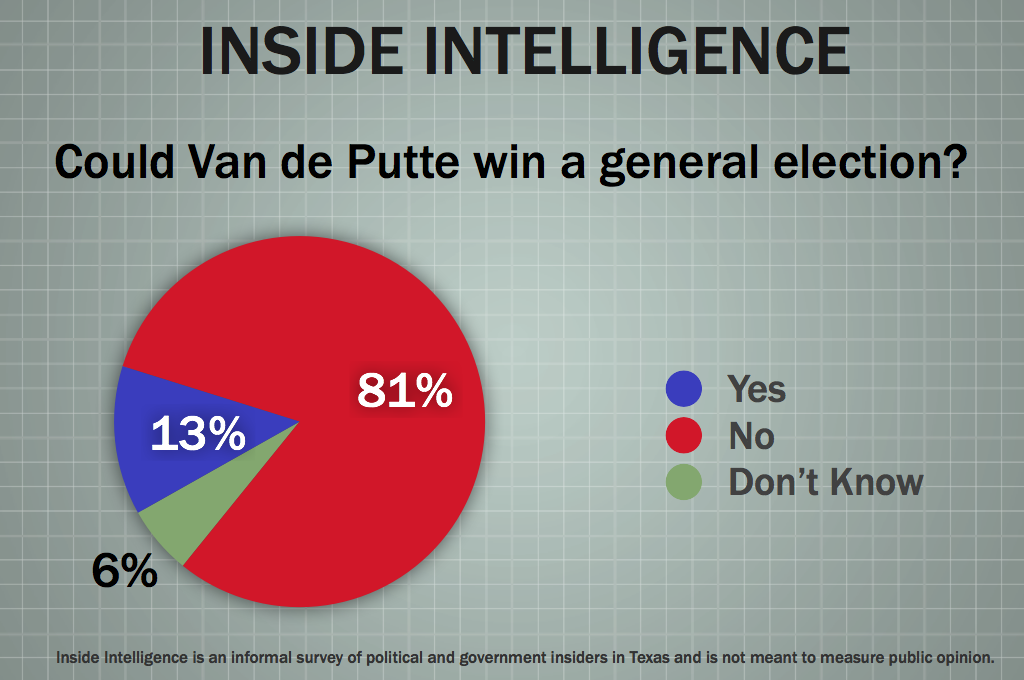 Do you think Van de Putte could win a general election for lieutenant governor?

• "Dan Patrick is going to win the primary, and it's always the wild cards that make the biggest mistakes - it's happened in places just as conservative as Texas. Can she? Yes. Will she?"

• "No, unless her opponent provides a Clayton Williams oops moment."

• "It depends on who wins the Republican primary. A 'too-far-to-the-right' candidate could provide a small window of opportunity for the senator."

• "Major uphill battle for any D in a statewide race"

• "She can win. Likely? No. But the Republican base is divided on this race, and if Dan Patrick wins the nomination, his glorious extremism creates an opportunity."

• "Are you freaking kidding?" 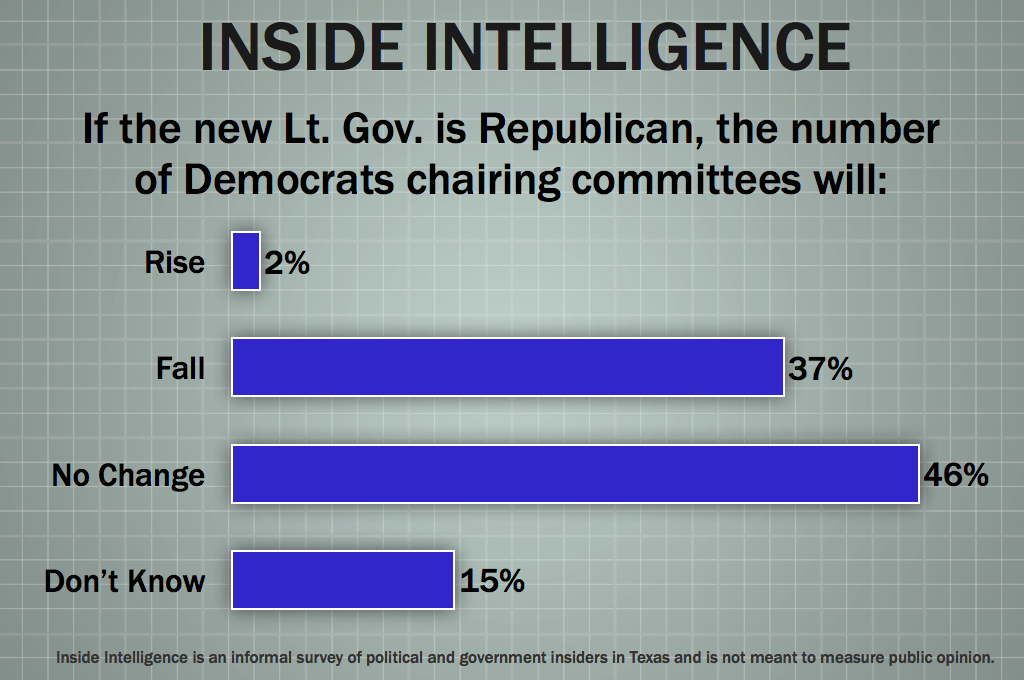 If the next lieutenant governor is a Republican, will the number of Democrats heading committees rise, fall, or stay more or less in proportion to their numbers in the Senate?

• "Patrick will decrease the number of appointments; but R's and D's hate Patrick, and would just go around him and change some Senate rules to decrease his power."

• "There are a finite number of experienced Senators to lead committees and Senate tradition is well established regarding how power is shared."

• "Based on early rhetoric, a Republican Lite Gov will be hard pressed to hand out more committee chairs to Dems (even if those committees aren't important)."

• "I don't think any of the Republican candidates gives a rat's butt about the democrats so it'll definitely fall. Even if Dewhurst wins, one could see democratic chairs and positions on Finance dropping."

• "GOP Primary voters cannot fathom why a Republican would appoint Democrat committee chairs.  All of the challengers to Dewhurst will pledge to reduce or eliminate entirely the number of Democrats who head committees." 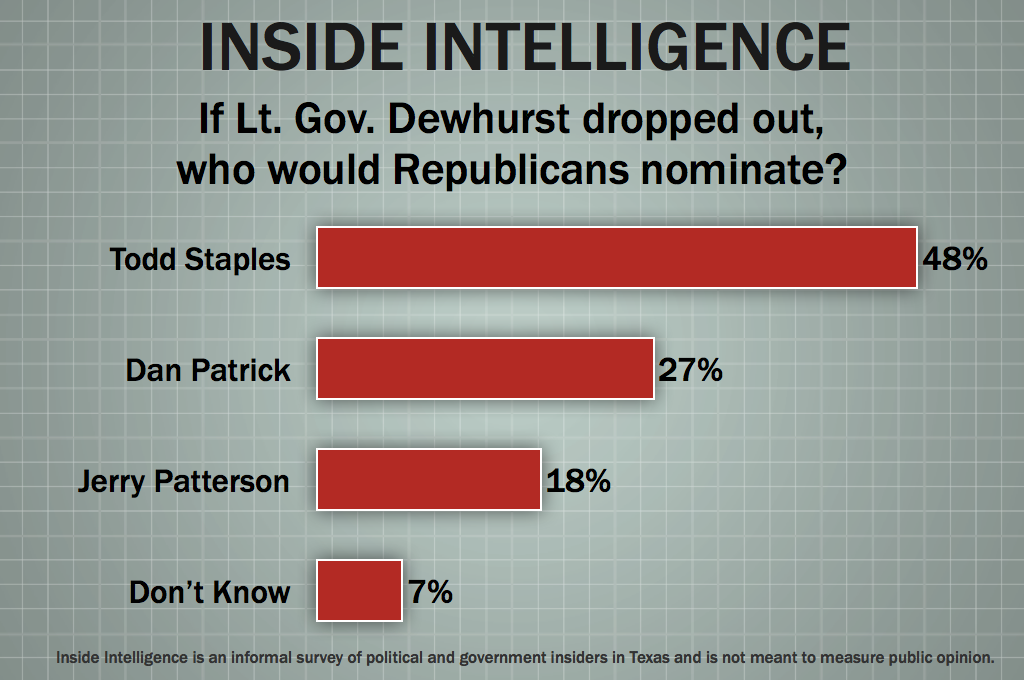 If David Dewhurst were to drop out of the Republican primary for lieutenant governor, who do you think would win the GOP nomination?

• "Jerry Patterson's reputation as a straight shooter (no pun intended) could result in a blunt comment that blows up his campaign, but if Dewhurst is out of the race, he should pick up the R's who can't stomach Patrick or Staples to go along with his base of gun supporters and veterans."

• "First, it is still too early to determine the outcome of this race, but the candidate with the most to gain would be Todd Staples."

• "We would then need a new candidate."

• "We're insiders. We want a smooth knowable transition. Former Senator Staples would bring a sense of knowledge and appreciation for the institution."

• "On the other hand, Jerry Patterson could accidentally shoot the other two and win outright." 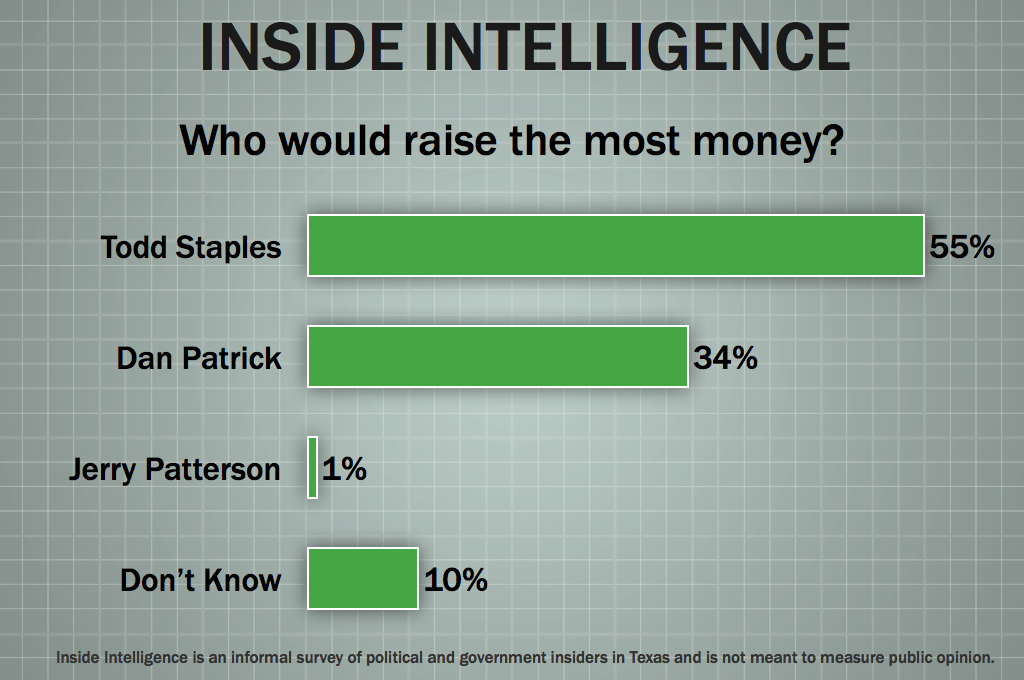 Who would raise the most money?

• "Staples would raise the lion's share of establishment money."

• "Patrick's money would be in small denominations, like $25, but he'd have tens of thousands donors of his ilk."

• "The race will be to see who has the most traction with the Dewhurst existing contributors."

• "As long as The Dew is in the race, no candidate will have a clear fundraising advantage. Once the Dew is out, expect Staples to start showing us the money."

• "The winner will raise the most."

• "None of the three are doing exceptionally well now...if one pulled away in the polls, it would attract front-running money."