The insiders are expecting some shifts in power after the 2014 elections, no matter who wins the elections.

After nearly 13 years on the job, Gov. Rick Perry has amassed enormous power in the governor’s office, partly through his appointments and partly because dozens and dozens of people who worked in his office are now running most of the state’s executive departments and agencies. Perry isn’t seeking re-election, so what’s next?

More than half of the insiders expect power to shift back to the legislative branch after Perry leaves; 37 percent expect things to remain as they are.

Who’ll be the most influential state official in 2015? The insiders see the speaker and the governor at the top of the heap with the lieutenant governor — whoever it might be — getting only one vote in five. With four prominent Republicans seeking that job — including incumbent Lt. Gov. David Dewhurst — the responses were mixed as to whether the next lite guv will have the powers Dewhurst has now: 31 percent said it will remain about the same, while 20 percent expect it to be a less powerful post and 23 expect it to be more powerful.

Finally, we asked what the House will look like after the 2014 elections, and more than half think it will look about like it does now. Nearly three in 10 expect it to be more conservative, while 17 percent said it will be less conservative.

We collected comments along the way and have attached a full set; a sampling follows: 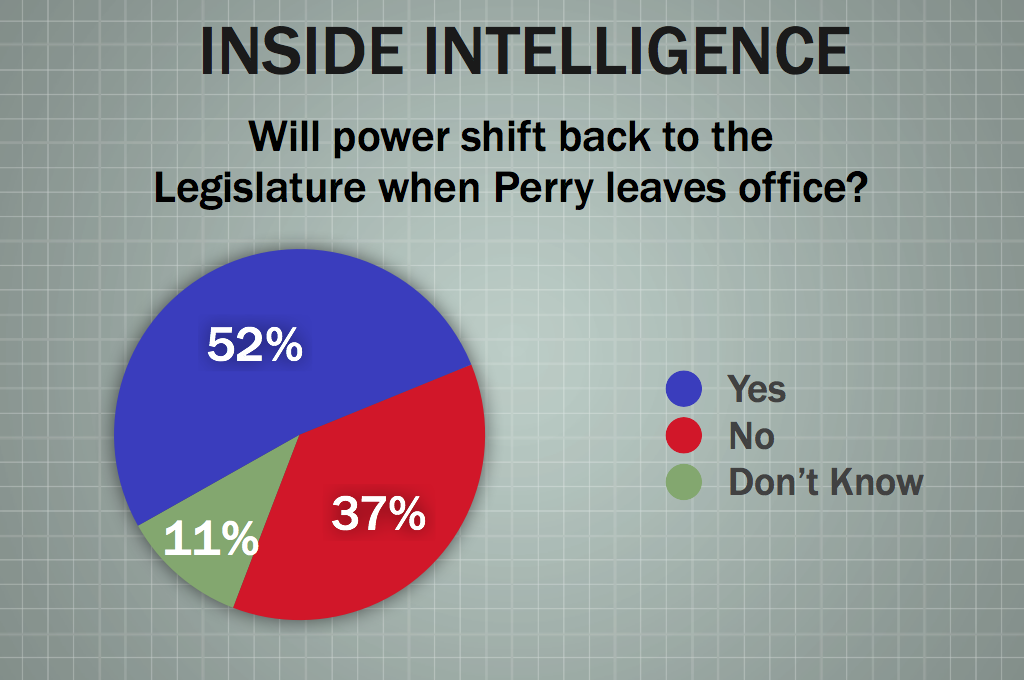 Will power shift back to the legislative branch when the governor’s office changes hands in 2015?

• "No matter who the new governor is, male or female, the legislature initially will flex a little bit of that muscle that's gone soft."

• "It must. The legislature will have its usual amount of turnover and ambition, but the governor will be someone who has not had decades dealing chits and making board appointments and trading favors so he/she will be comparatively weaker in comparison to the legislature."

• "Depends on the style and leadership of the South, West, and East wings of the Capitol. Today, the South wing dominates; West is strengthening; East is a joke."

• "Maybe the Senate, but not the House. Turnover has limited the experience-level of members. Not sure House members would know what to do. And considering the make up of that body, that's not a bad thing."

• "With a new governor, the Legislature seems to always retake power, if only for a session or two. Their experience in the arena gives both chambers an upper hand when the new governor and his/her staff get their feet on the ground. One exception was Bush who won a tough battle on a limited number of issues, so the Legislature worked off of the fact that the voters endorsed his issues."

• "Texas' legislature lacks strong leadership...Abbott and staff are ambitious, so it's difficult to envision much change."

• "Yes, because the Republicans in control of the House and Senate are not going to take marching orders from Governor Wendy Davis." 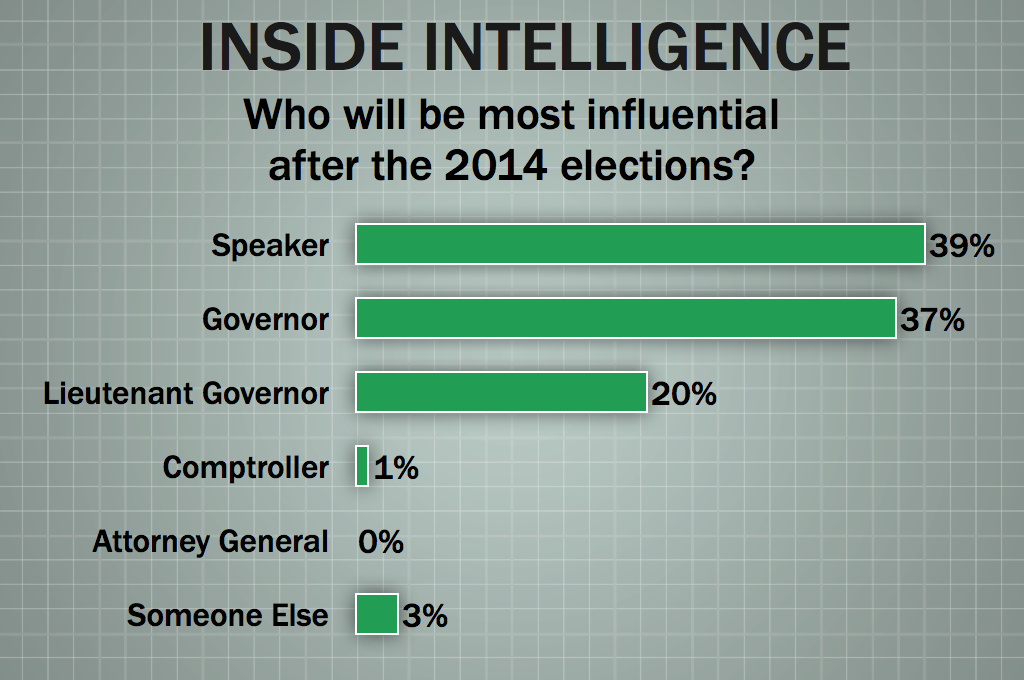 With a new governor in place, who will be the most influential state official over the new few years?

• "The Speaker should be the most influential unless it turns out all three top officers are new."

• "By constitutional design, it should be the Lite Gov, but we'll see how that shakes out..."

• "Maybe not as influential, but stick with Governor's Office."

• "Perry has built that office into a position of power and authority. It will remain that way. Any future governor who does not embrace and utilize it will do so at their own detriment."

• "The Speaker should be the most influential, but he has to win the races he hopes to win in the Primary to assure himself of influence. Otherwise, he'll be ringmaster of infighting while the D's look on (again). Until we see who wins the primaries, we won’t really know."

• "If he has a House which can be managed, Straus should emerge as the clear leader. He was often the only adult in the room this past session." 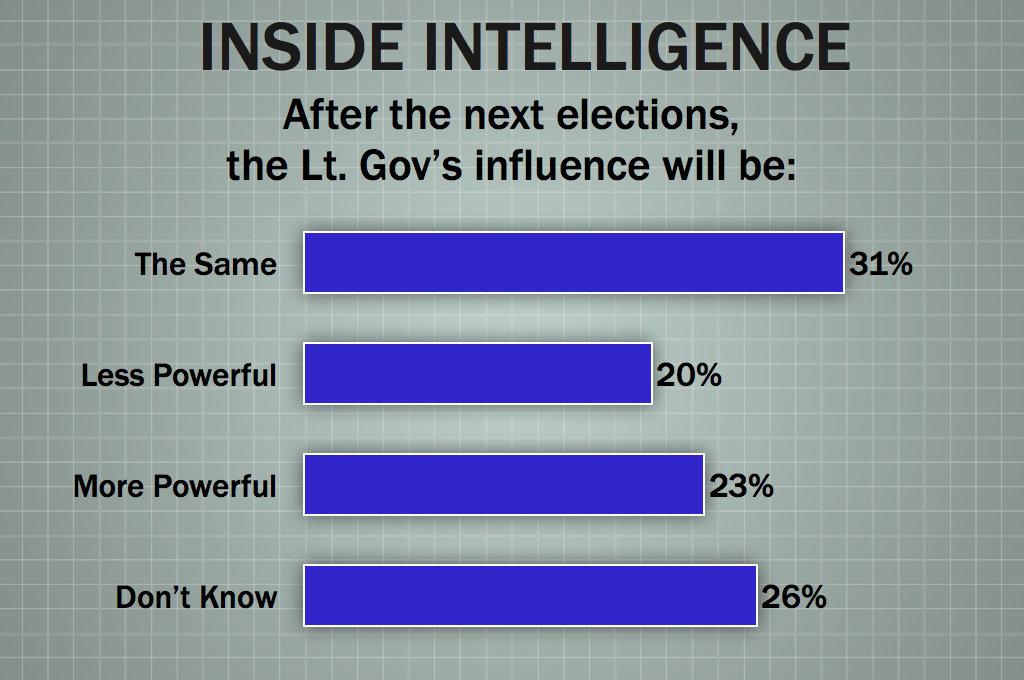 After the 2014 election, the lieutenant governor’s role in the Senate will be:

• "Seeing how the Lite Gov derives most of his legislative power from the Senate rules, it really depends on the outcome of the SD-10 race. If R's flip it, then it won't matter because of the super majority--look for a less powerful Lite Gov."

• "Any of the three challengers will actually take the role of a Lt. Governor and make it stronger and more successful. They will have an agenda."

• "If Dewhurst or Patrick are elected, the Lite Gov role will be diminished by the Senators. Patterson and Staples have the potential to be more powerful than the office is now."

• "The notion that the Lt. Gov. is the most powerful person in Texas is no longer true in anyway that matters. That is partly the Dewhurst legacy and partly the result of Perry using the media to transform the role of Texas Governor into the actual leader of the state." 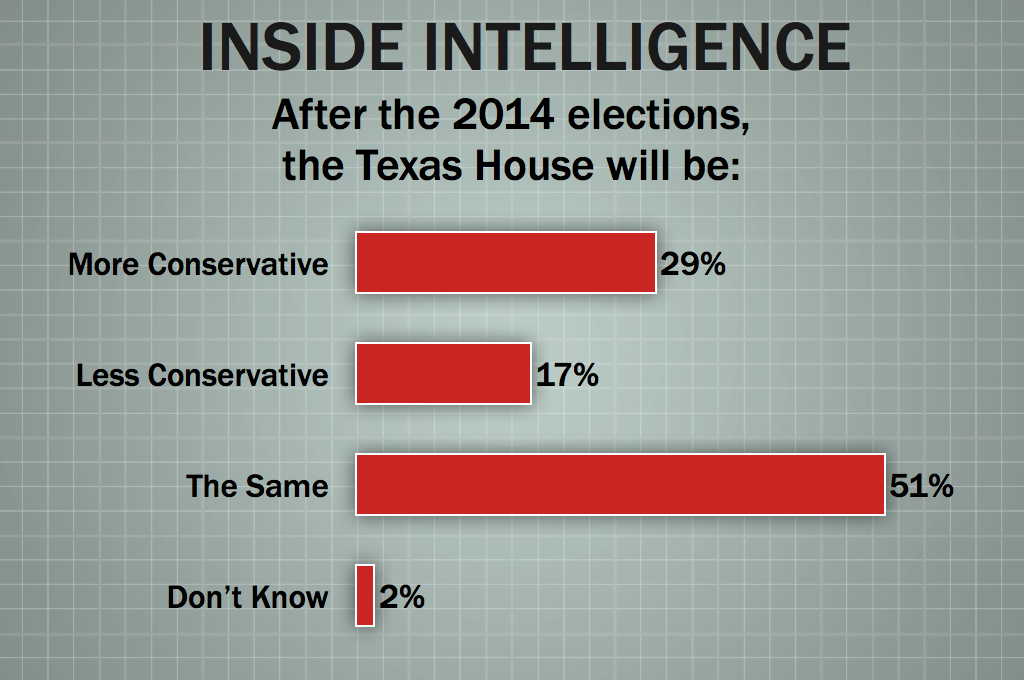 • "Until Obama is out, more conservative legislators will be elected. The electorate's action is a direct response to the overreach of Obama's administration."

• "There are many conservative-minded members, but they need guidance and direction to focus their efforts. The outcome depends on whether Abbott can set a tone and carry out an agenda that is as effective and conservative as Perry's."

• "State is slowly becoming less conservative, but off-year elections have lower turnout and favor the GOP base."

• "The squishy Republicans won't prevail anywhere, but the Tea Parties who are challenging some of the most right-leaning House members won't prevail either -- they may pick up a couple of seats, but there's no momentum to throw them out."

• "Hard to get more 'conservative,' if by 'conservative' you mean incapable of rational discussion on the future of Texas."