With the state’s junior senator touring Iowa and the governor open to conversation about another presidential run, we asked the insiders about their chances.

More than half said U.S. Sen. Ted Cruz should not run for president, but 76 percent said he would do better in a Republican presidential primary than Gov. Rick Perry. Four out of five said Cruz could not win the presidency.

With Cruz in Washington and Perry not running for reelection, we asked which Republican will be the face of the Texas GOP for the next few years. The favorite of the moment, with 62 percent: Attorney General Greg Abbott, who is running for governor in 2014. Cruz got 26 percent of the votes, and Perry got 1 percent. U.S. Sen. John Cornyn and Lt. Gov. David Dewhurst got no votes and 16 percent said they either don’t know or think it will be someone other than those five.

We asked for comments along the way and a full set of those is attached. A sampling follows: 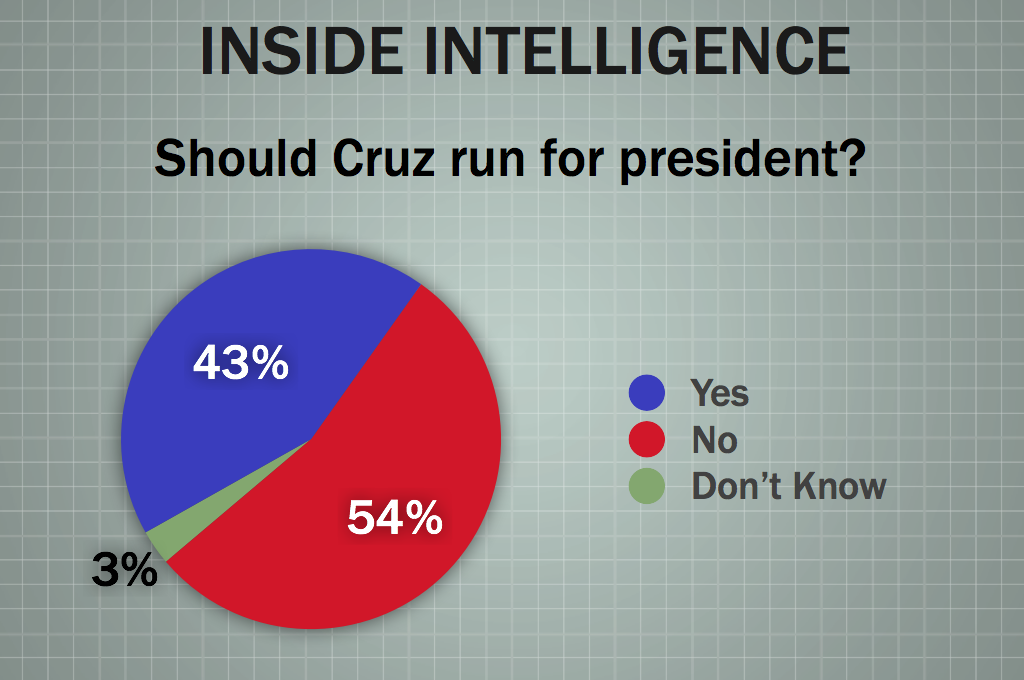 Should Ted Cruz run for the Republican presidential nomination in 2016?

• "I don't like it, but the stars are aligning up for him. He has electrified the base like no one else. Now the reality is that Republicans will once again lose another presidential race if he gets out of the primary."

• "Explain it to me like I'm a four year old: how is he qualified? What’s his experience? What's his legislative or executive or 'life' accomplishment(s)? How has he demonstrated he can work with folks to achieve a common goal?"

• "Why not? A US Senator with less experience than Cruz was elected President in 2008 and serves as President today."

• "The more Ted Cruz is the national brand of Republicans, the better it is for Democrats anywhere in the country - except maybe Texas if he were actually nominated, and that's still a big 'if.'"

• "Sure, why not? On paper, he's the perfect candidate--smart, articulate, young, and Hispanic. And his libertarian leanings will attract voters." 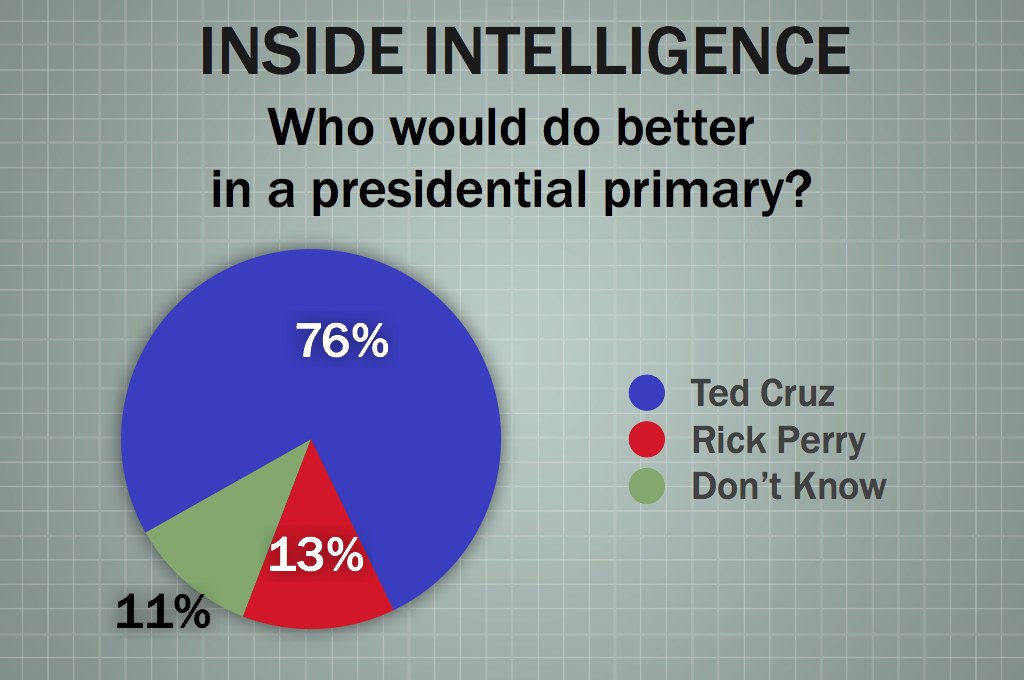 Which Texan do you think would do better in a Republican primary?

• "We have no Texans qualified to run in the 2016 GOP Presidential primary."

• "Perry's national moment has come and gone. Cruz can best articulate the issues that primary voters will have on their minds in 2015-16 (federalism; big gov't)."

• "Ted Cruz may be smarter; Rick Perry is a much better candidate. I don't look for the errors in 2012 to repeat themselves."

• "One has state legislative and executive experience (in a big state), served in the military, has done manual labor as a farmer, and has real, honest-to-goodness achievements and experience under his belt. The other is a career staffer, lawyer, and has been U.S. Senator for less than a year. On paper I know which of the two I would prefer."

• "As much as it may disappoint many Texans, the country is not that enamored with Texas leaders. Just travel a little a little and let people find out you are from our great state."

• "Maybe this would be better phrased as 'Which Texan do you think would get beat by less in a Republican primary?'" 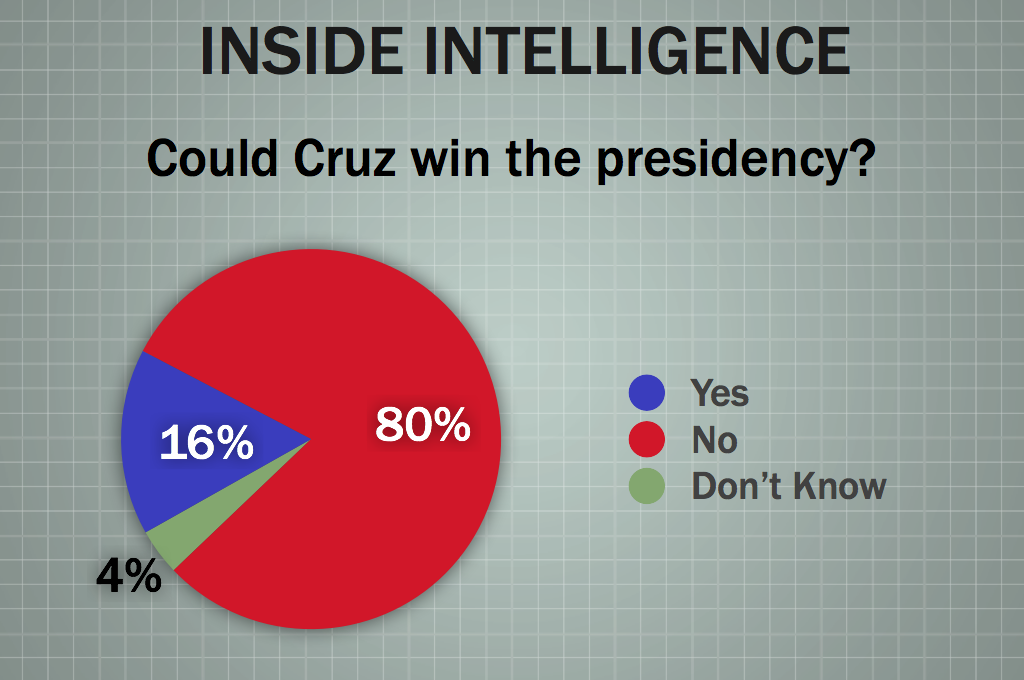 Do you think Ted Cruz could win the presidential race in 2016?

• "Too young and inexperienced. The public will have time to see and understand the devastation of the B. Obama presidency."

• "Cruz has gained notoriety by being against things he should be against. To win, he must start telling the voters what he is FOR."

• "Cruz would give voters a CHOICE. We're weary of the McCain, Romney, ECHOs."

• "He's been in the Senate less than a year and before that was a career staffer and lawyer. How does that qualify him to be POTUS? He represents a small but vocal minority of the GOP and his antics will not play well during a lengthy primary battle across multiple states."

• "He'll have to hold the right and still come to the middle to get people like me. Hard to do, but not impossible."

• "If Obamacare is implemented in 2015-2016, the cost burden will hit the economy. That means one thing: big year for Republicans."

• "No, but he wasn't supposed to win his US Senate seat either." 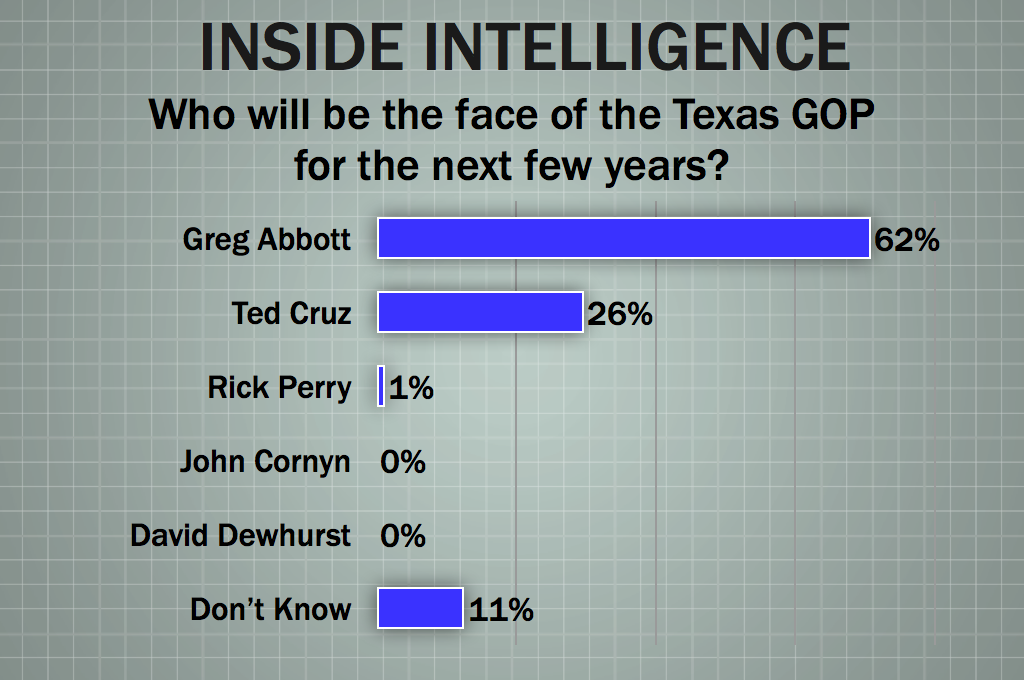 Now that Gov. Rick Perry isn’t seeking reelection, who will be the face of the Republican Party in Texas for the next few years?

• "Cruz-mania is in effect. He officially becomes the face of the conservative movement in Texas."

• "It will be Abbott by default if he becomes governor. 1) Perry will be focused on running for President; 2) Cruz is focused on fixing Washington; 3) Cornyn has never aspired to fill that roll; and 4) Dewhurst? Bush, Patterson, Staples... not going to happen."

• "Abbott has made no mistakes unless you count his liability claim, and no one cares about that except a few trial lawyers. He is well liked among mainstream Republicans as well as TEA party types. To date, he's been red meat enough to satisfy the hard-cores, and reasonable enough to satisfy the mainstreams. If he can continue the balancing act he'll be the Republican leader in Texas for a while."

• "Assuming he wins the governorship and none of these men get elected president."

• "George P. Bush. While Abbott will most likely be Governor, and will be highly visible, the Republican party, and the state as a whole, will be best served by championing the well-reasoned conservatism of George P. - not the self-promoting anarchy advocated by Ted Cruz."

• "Cornyn is colorless, Dewhurst will be defeated if he actually runs, Perry is fading into well-deserved obscurity, and budding star Cruz will be operating out of Washington. The governor leads the party."