With the biggest war chest in the state — almost $21 million cash on hand — Attorney General Greg Abbott will be hard to beat in his campaign for governor. From early polling to Facebook advertisements, his team is positioning itself as a campaign with experienced consultants looking for new ways to reach out to voters.

Abbott has spent $1.9 million in the first half of this year — $646,000 more than his total expenditures in 2012. By comparison, his only announced opponent, Republican Tom Pauken, has raised $120,442 since announcing his candidacy in March. So far, there is no Democratic contender, though state Sen. Wendy Davis, D-Fort Worth, recently said she's considering a run. She raised $933,000 in the final two weeks of June following her now-famous abortion filibuster.

Historically, Abbott’s highest spending years have been election years, with his first run for attorney general totaling $6.8 million. Now that Gov. Rick Perry has decided not to run for re-election, clearing the way for Abbott to run for governor, 2014 is likely to be his biggest spending year yet.

“Texas is a large state, and it takes a lot of money to get a message out to the voters,” said Matt Hirsch, Abbott’s spokesman. "With the money we’ve received, we’re going to use it to get Greg Abbott’s conservative message out to Texas.”

"We have an incredibly diverse group of people working the campaign, some of whom worked for Gov. Perry," Hirsch said. "General Abbott tried to hire the best people and let them do their job."

Past campaign finance reports show Abbott switched to Wilson Perkins from Baselice & Associates, the campaign’s former internal pollster, in 2012 after relying on Baselice for nine years.

Hirsch said the results of the Senate race had no bearing on the campaign's switch to Wilson Perkins. 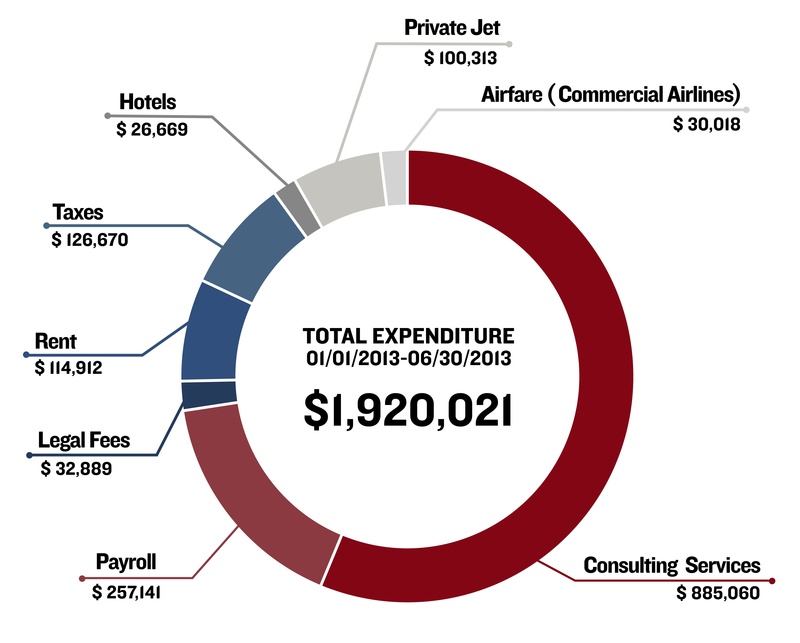 The Abbott campaign’s payroll for the first half of the year totaled $257,141, and expenses for travel, including airfare, hotel and travel by private jet, totaled $157,000.

Abbott’s largest expenditures since 2002 are two separate $2.9 million media buys in 2010 and 2006 respectively; both times he was running for re-election for attorney general. This time around, the Abbott campaign has focused its outreach efforts on online advertising and social media.

The campaign has so far spent more than $343,000 on online advertising and social media through Targeted Victory, an advertising agency Mitt Romney tapped during his failed 2012 presidential bid.

“We’re building this kind of digital grassroots army,” Hirsch said. “People always say the Republican Party is trying to catch up to Democrats with what they’re doing online. It’s safe to say we’re going to leave Democrats in the dust with what we’re doing online."

But Texas Democrats — despite not having a candidate in the race yet — say they are not convinced experienced consultants and Abbott’s war chest will be enough.

“The fact that the Abbott campaign has signed up a bunch of Perry consultants just proves that they’re not focused on the future,” Tanene Allison, communications director for the Texas Democratic Party, wrote in an email.

Allison said no amount of online advertising will get Abbott the same response state Democrats received during Davis’ abortion filibuster, when hundreds of activists filled the Capitol rotunda and made enough noise to delay a Senate vote on the restrictive abortion bill on the last day of the first special session.

“Greg Abbott wants to compete with the fact that Wendy Davis is already an Internet superstar before she's even announced her plans for the future,” Allison said. “You can't buy genuine grassroots support and excitement with a few online ads. We look forward to seeing the first time Abbott gathers thousands of young people to the Capitol through online organizing.”