A study of water quality in the Barnett Shale region of North Texas has found elevated levels of arsenic in wells that are closer to natural gas extraction sites. But the reasons behind the contamination are far from clear, and the study, published last week in the peer-reviewed journal Environmental Science & Technology, is sure to fuel an already fierce debate over the impacts of hydraulic fracturing.

University of Texas at Arlington researchers tested 100 private water wells in 2011 in Tarrant and surrounding counties in the Barnett Shale region, where oil and gas companies have been injecting a combination of fluid, chemicals and sand to release shale gas from rock formations in a process known as hydraulic fracturing, or fracking. Those with dangerously high levels of arsenic — about one-third of the wells — tended to be much closer to natural gas wells than those that were not contaminated. Long-term exposure to arsenic is linked to several major diseases, including prostate, lung, skin and liver cancers.

Fracking could have contributed to the elevated arsenic levels, said lead author Brian Fontenot. Faulty gas well casings or excess water pumping could add metals to the water, or the vibrations that come from drilling “can shake the rust on older private water wells,” he said. That rust could contain arsenic.

"We're not saying that they’ve injected arsenic into these wells," Fontenot said. But he said the study, which is self-funded, could show "indirect ways" of contamination by drilling activities, especially because the wells his team tested that were far from drilling activities did not contain high levels of arsenic. 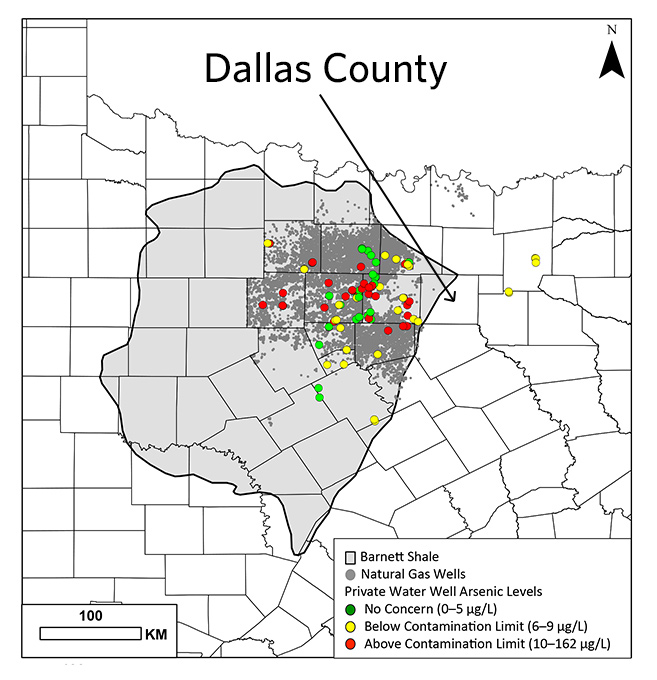 Enlarge
This map shows the location of all the wells tested in the Barnett Shale region for the study, and their level of contamination by arsenic.

Rob Jackson, a Duke University scientist who has studied the impacts of fracking in different shale regions, said the study is a valuable contribution to a growing body of research on the issue.

“It’s the first study that I know of looking at the Barnett Shale and water quality,” Jackson said. “The Barnett’s an important place, because this kind of drilling has been happening longest in the Barnett.”

The possibility that arsenic contamination could be linked to fracking also caught Jackson’s attention. His study on Pennsylvania’s Marcellus Shale found that drinking water near gas wells contained stray gases like methane, the main component of natural gas. And though drilling companies say the recipe of chemicals that they inject into the ground is secret, they do generally use substances that are collectively referred to as BTEX — benzene, toluene, ethylbenzene and xylene — but the researchers in the UTA study didn’t find those.

“Where are the metals coming from?” Jackson asked. “Are they coming from the drilling or are they being dissolved from the rock by something leaking out of the top of the well?”

But industry advocates are skeptical. “For all the science that was applied in that study, those kind of conclusions are about as unscientific as you can get,” said Ed Ireland, head of the Barnett Shale Energy Education Council, a nonprofit based in Fort Worth whose members are oil and gas companies that operate in the region.

If fracking were contaminating the water, he said, the researchers would have found BTEX. “They didn’t find any. To me, that was significant,” he said.

The researchers’ suggestion that mechanical vibrations may release the chemical, is a “sloppy conclusion,” Ireland said. “With such a small sample size, they really can’t reach a conclusion like that.”

Jackson, the Duke researcher, also said the relatively few number of wells in the study is a big limitation. And the researchers didn’t test the wells before drilling began, so the arsenic could have been there beforehand.

The study’s authors looked at historical data for about 300 wells in the area and found that in the 1990s, not a single one had dangerous levels of arsenic.

“There is good overlap between that historical data and their extraction and nonextraction wells,” Jackson said. “It suggests that the water quality has changed, and oil and gas drilling might be the cause.”

Research on the impacts of hydraulic fracturing on drinking water has been mixed, and the results hotly contested. While Jackson found evidence of contamination in the Marcellus Shale region in Pennsylvania, he didn’t find any in a study of the Fayetteville Shale in Arkansas.

Last week in Washington, D.C., U.S. Rep. Lamar Smith, R-San Antonio, and other congressmen blasted the Environmental Protection Agency in a hearing that questioned its work on this issue, and the Los Angeles Times on Monday published a report suggesting that an EPA study on fracking and water contamination had been censored. Last year, a UT-Austin scientist at the Energy Institute made headlines when he found no link between fracking and water contamination, but was then heavily criticized for failing to disclose more than $1 million of income that came from a drilling company.

The UTA study’s lead author, Fontenot, said his team is working on another study in the Cline Shale region in the Permian Basin, where drilling has recently begun. Landowners have let them test the water before natural gas activity started so they can compare samples before and after the extraction process.

Fontenot is also a scientist in the EPA's Dallas office, where his work is not related to oil and gas activities. He said his team chose not to ask for funding for this study from environmental or industry groups, instead using a start-up grant from UTA and paying out of pocket for other expenses.