In the wake of the U.S. Supreme Court’s invalidation of the Defense of Marriage Act last week, some prominent Texas Republicans were quick to push back against the embrace of gay marriage rights.

U.S. Sen. Ted Cruz criticized the ruling, offering that he strongly supported “traditional marriage between one man and one woman.” Agriculture Commissioner Todd Staples tweeted, “I’m very disturbed by today's SCOTUS rulings on marriage.” Cruz’s public opposition resonates with the conservatives who propelled him into the U.S. Senate last year; Staples’ quick criticism is consistent with his efforts to stake out territory on the right wing of the Texas GOP as he undertakes a run to unseat David Dewhurst as lieutenant governor. 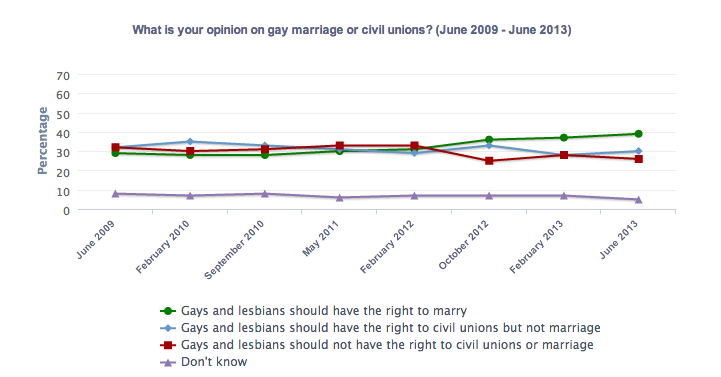 As we wrote prior to the DOMA decision, this state of affairs presents Republican politicians with an increasingly familiar dilemma: Cater to an intense base of voters with opinions that are becoming increasingly at odds with the overall public opinion environment, or take on the very real, short-term risks of embracing changing attitudes.

The Supreme Court decision immediately requires the federal recognition of same-sex unions, but it will be up to states and localities to make policies that apply below the federal level. This disconnect, between broad acceptance of gay marriage among many in Texas' emergent majority (including 45 percent of Hispanics and 57 percent of 18-to-29 year olds) and the rejection of any form of same-sex unions by Republican primary voters in particular, puts Republicans in the same sticky situation they find themselves in with immigration – balancing short-term electoral concerns with long-term realities.