As we enter into the homestretch of the 83rd regular session, it's time for a snapshot of the ideological location of the members of the Texas Senate and House this session using their votes through April 30.

I carried out this preliminary analysis of the ideological location of each Texas legislator based on roll call votes taken in each chamber during the first 113 days of the 140-day regular session, using a Bayesian estimation procedure developed by Stanford University Professor Simon Jackman. Altogether it draws on the 330 and 173 non-lopsided votes cast during this period in the Senate and House respectively to locate the senators and representatives on the Liberal-Conservative dimension along which most legislative politics in Austin (and Washington, D.C.) takes place. I’ll do a more complete and definitive analysis in June, using data from the entire session.

On the figures included here, Republicans are indicated by red dots and Democrats by blue ones. The figures are based on the roll call vote analysis, and for each legislator provide a mean ideal point (referred to below as the Lib-Con Score) along with the 95 percent credible interval (CI) for this point estimate. Only when a legislator’s CI does not overlap with that of another legislator can we state with some certainty that their respective locations on the Liberal-Conservative dimension are credibly distinct from each other. In other words, if two legislators’ CIs overlap, their positions on the ideological spectrum might be statistically equivalent, even if their Lib-Con Scores are distinct. 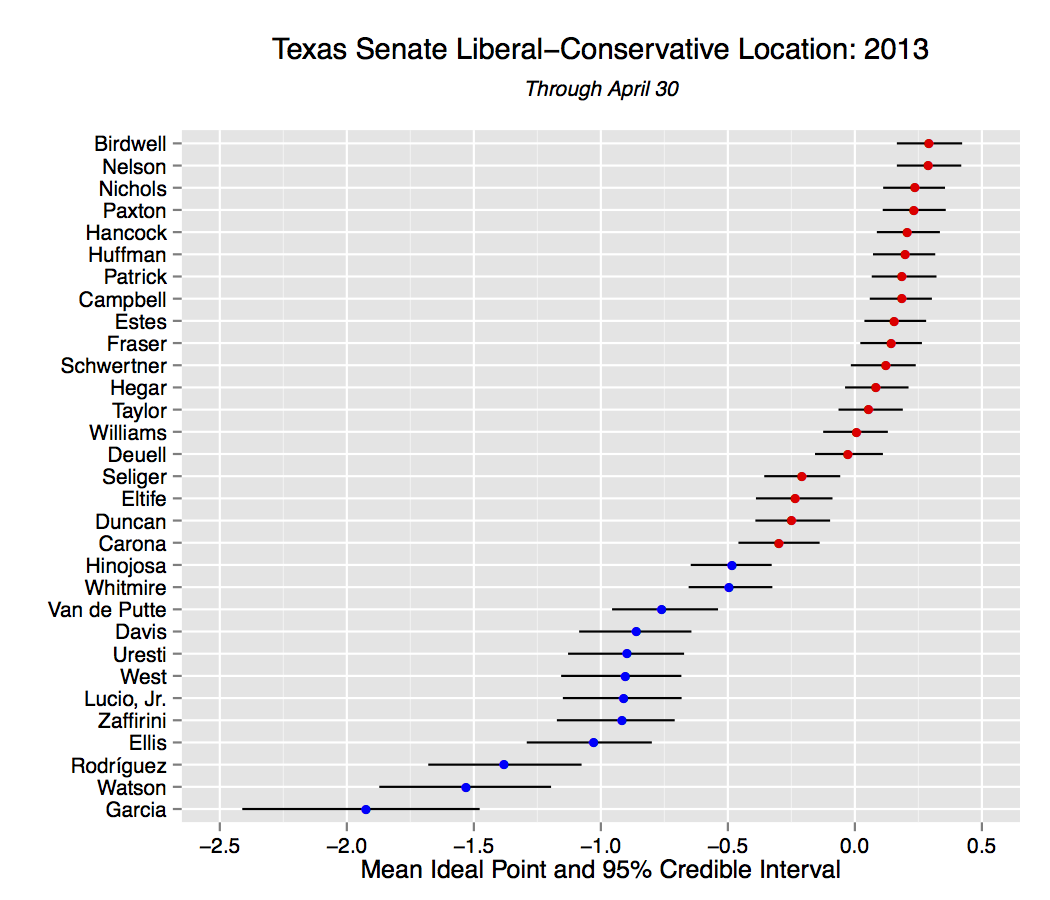 When reviewing the figures, it is important to consider that the legislators’ relative locations on the Liberal-Conservative dimension are likely to change somewhat between now and the end of the session, especially in the House. Further, it is vital to keep in mind that just because a Republican’s Lib-Con Score is noticeably lower than that of most of the members of the GOP delegation, this does not mean he/she is not a conservative, only that he/she has a voting record which is less conservative than that of most of his/her fellow Republicans. Finally, the scaling technique used to calculate the Lib-Con Scores (ideal points) is 100 percent chamber-specific, and as a result, the Lib-Con Scores of senators and representatives cannot be directly compared to each other.

The scores in the Senate range from conservatives Brian Birdwell, R-Granbury, and Jane Nelson, R-Flower Mound, on the right end of the ideological spectrum to liberals Kirk Watson, D-Austin, and Sylvia Garcia, D-Houston, on the left.

In spite of the relatively consensual atmosphere that pervaded the Senate during most of its first 113 days, the body still exhibits a very high degree of partisan polarization, with all Republicans racking up scores that are more conservative than those of every Democrat. A few Democrats and Republicans do overlap; nevertheless, as partisan and ideological tensions continue to rise over the next few weeks, it is extremely likely this overlap will diminish, if not vanish completely, by the end of the session on May 27.

Next, while Birdwell registered as the most conservative senator to date, his score is statistically indistinguishable from that of two-thirds of his fellow Republicans. The tight grouping on the right side of the Senate underscores a very high level of ideological homogeneity within the GOP delegation so far this session.

The exception is the presence of a noticeably distinct quartet of Republican senators: John Carona of Dallas, Robert Duncan of Lubbock, Kevin Eltife of Tyler and Kel Seliger of Amarillo. Their scores are significantly less conservative than those of almost all of the 15 other Republican senators, ranging from all but one in the case of Carona to all but three for Seliger. In recent years, these four centrist conservatives have been among the East Wing’s most influential pivot players, with few bills they actively oppose successfully making it out of the Senate.

Senate Democrats sub-divide into three rough ideological groups, with Juan “Chuy” Hinojosa of McAllen and John Whitmire of Houston at the conservative end of the Democratic ideological spectrum, and José Rodríguez of El Paso, Watson and Garcia at the liberal end. During her special election campaign earlier this year, Garcia stated she would be a vigorous and uncompromising advocate for progressive causes in Austin. To date, her voting record indicates that — like her ideological polar opposite Ted Cruz in the U.S. Senate — she both talks the talk on the campaign trail and walks the walk on the Senate floor.

At the end of April, only 173 non-lopsided roll call votes had been cast in the House. This comparatively small number of votes combined with the potential for a large number of votes to be taken during May indicates that between now and the end of the session the scores  of many representatives could change notably.

The current scores in the House range from those of six Republican representatives who are tightly grouped at the far right edge of the ideological spectrum to a trio of Democrats who are more loosely arrayed at the far left edge of the spectrum.

From right to left, the six Republican representatives with the most conservative voting records through the end of April are Jonathan Stickland of Bedford, Jodie Laubenberg of Parker, Matt Schaefer of Tyler, Matt Krause of Fort Worth, Bill Zedler of Arlington and Scott Turner of Frisco. These six representatives possess significantly more conservative voting records than more than three-quarters of their fellow Republicans. Four of the six are freshmen (Laubenberg and Zedler are the veterans), while five are from the D-FW Metroplex, with Schaefer from nearby Tyler. 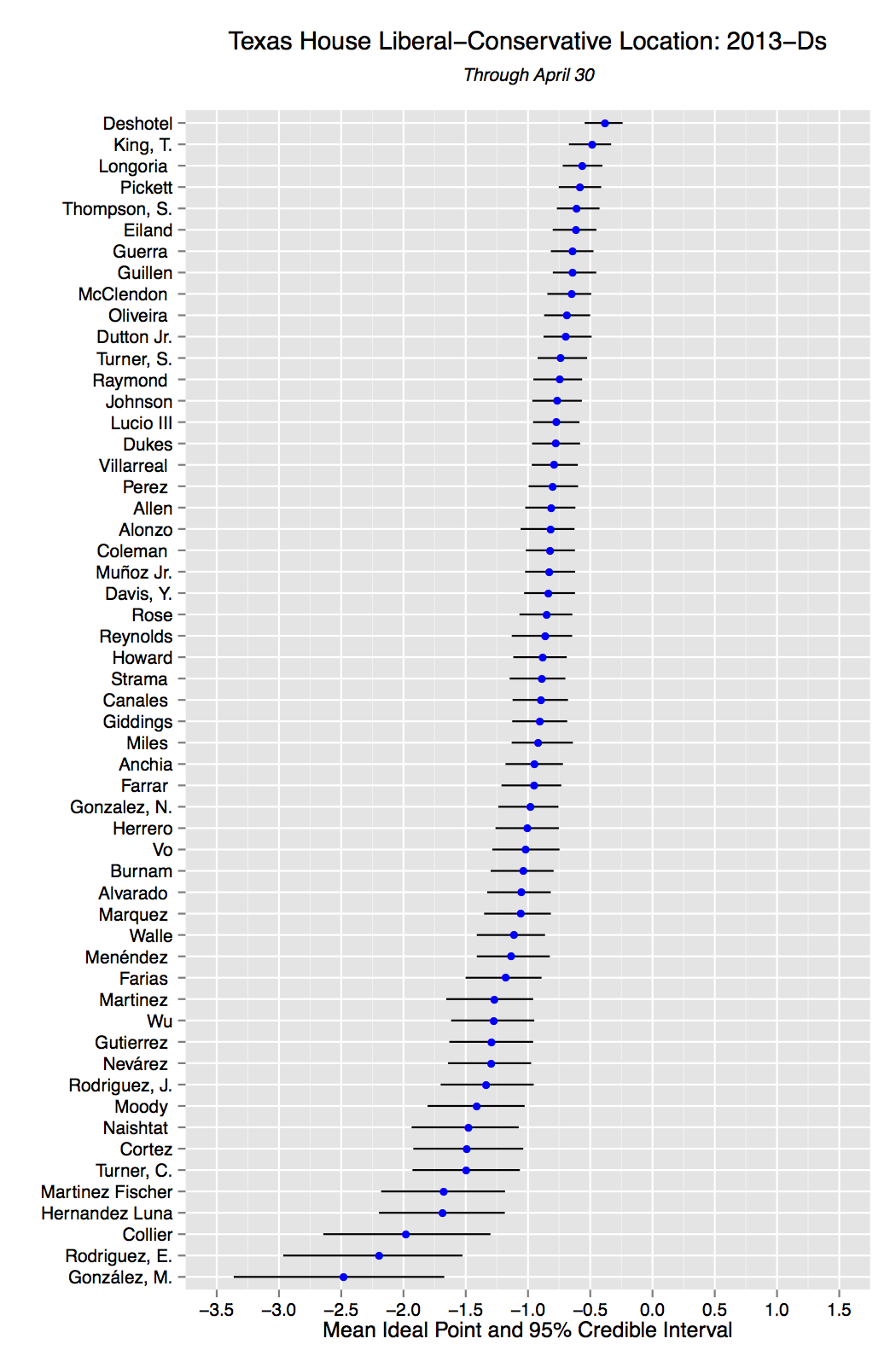 The House figures reveal a high level of partisan polarization, with every Republican more conservative than every Democrat. They also highlight the distribution of key members of Speaker Joe Straus’ leadership team at diverse points across the House ideological spectrum (the speaker, a San Antonio Republican, normally does not cast roll call votes). Appropriations Chairman Jim Pitts, R-Waxahachie, and House Administration Chairman Charlie Geren, R-Fort Worth, have scores in the least conservative decile of the GOP delegation, scores that are significantly less conservative than those of over half of their 93 fellow Republicans. At the same time, other leading members of Team Straus have substantially more conservative voting records, such as Speaker Pro Tempore Dennis Bonnen, R-Angleton, and Higher Education Chairman Dan Branch, R-Dallas. Only a tiny handful of Republican House members, have significantly more conservative voting records than Bonnen and Branch.

The figures presented here provide an interim portrait of the ideological location of the Texas legislators this session through April 30. Once the deluge of votes that customarily takes place during May has passed, I will return with a more comprehensive analysis of the 2013 regular session. That future study will provide definitive information on the final location of each senator and representative on the Liberal-Conservative dimension in 2013, and will examine the relationship between the legislators’ ideological locations and their win rates on floor votes.

Mark P. Jones is the James A. Baker III Institute for Public Policy’s Fellow in Political Science, the Joseph D. Jamail Chair in Latin American Studies and the Chairman of the Department of Political Science at Rice University.