Republican Mitt Romney has a commanding lead over Democrat Barack Obama in the presidential race in Texas, according to the latest University of Texas/Texas Tribune Poll. The survey of likely voters found that 55 percent support Romney while 39 percent support the incumbent. The remaining 6 percent said they support someone else.

The survey results illustrate the continuing dominance of the GOP in Texas — Republican John McCain got 55.5 percent of the Texas vote in 2008, to Obama’s 43.7 percent — and illuminate a significant gap in Texans’ feelings about national and state officeholders and government.

“At the top of the ticket, in the big marquee races, there are no surprises,” said Jim Henson, who teaches government at the University of Texas at Austin, heads the Texas Politics Project there and co-directs the poll. “We see the basic structure of the state, in terms of partisanship, pretty stable.” 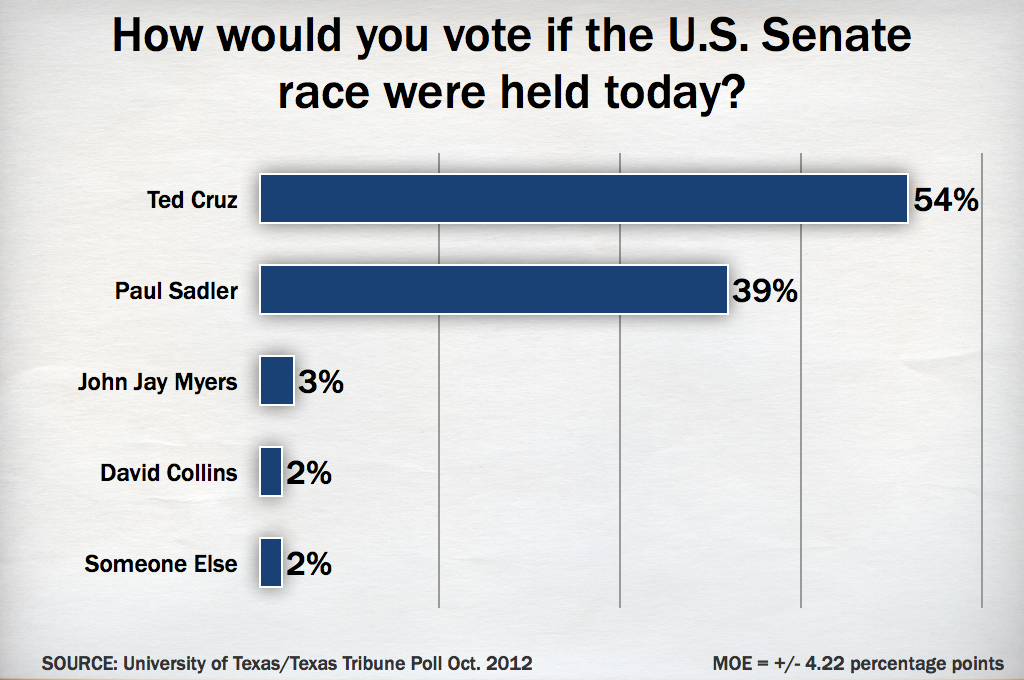 Numbers in the U.S. Senate race were similar to those in the top contest, with Republican Ted Cruz holding 54 percent of the support to Democrat Paul Sadler’s 39 percent, according to the poll. John Jay Myers, the Libertarian candidate, had 3 percent, and Green Party candidate David Collins had 2 percent.

More voters want to replace their congressional representatives than want to keep them. Asked whether their own member of Congress deserves re-election, 36 percent said yes, while 43 percent of likely voters said it is “time to give someone else a chance.” The remaining 22 percent said they didn’t know. 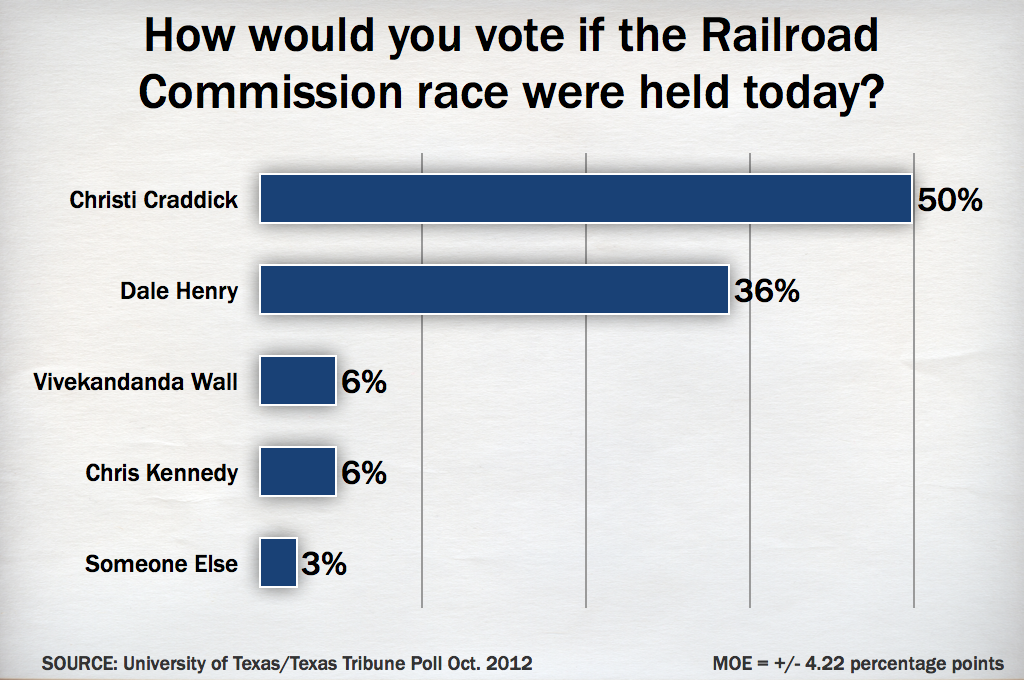 Republican Christi Craddick held the lead in the contested race for Texas Railroad Commission, with 50 percent of the support to Democrat Dale Henry’s 36 percent.

“What you have in these results is a pretty decent idea of what a Democrat with warm blood and a pulse can get in Texas,” said Daron Shaw, co-director of the poll and a professor of political science at UT-Austin. 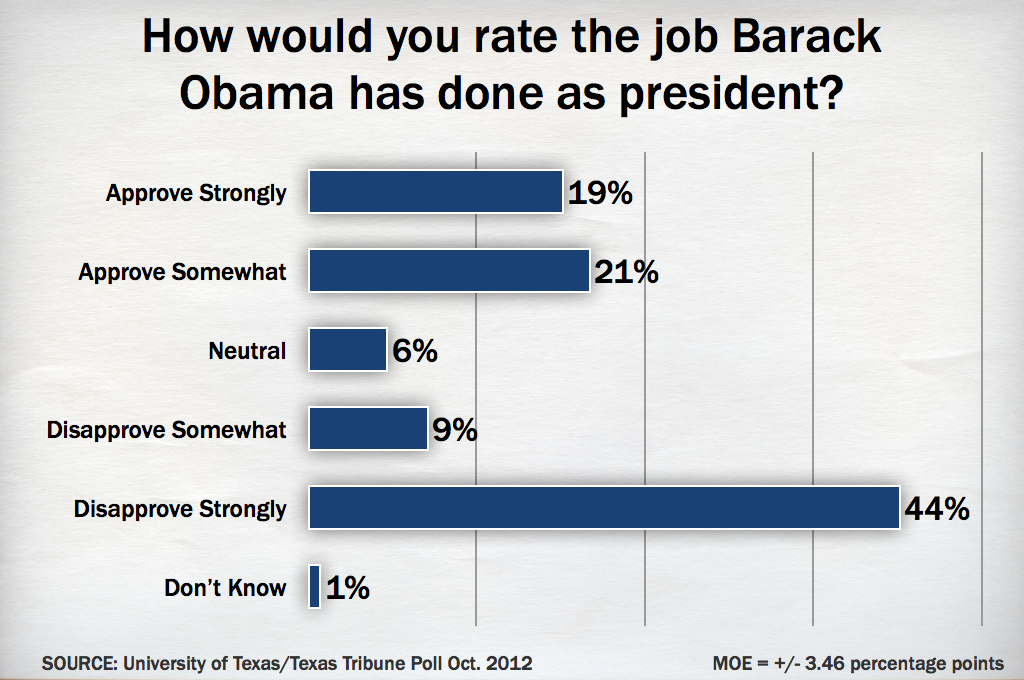 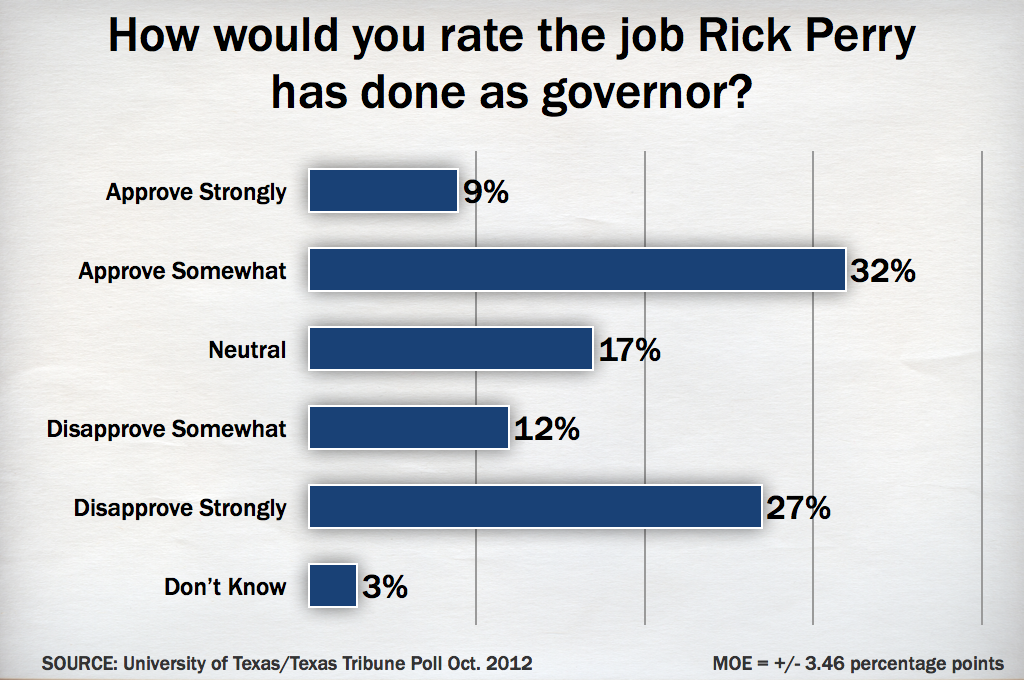 “One percent strongly approve of Congress — that’s my favorite stat in the poll,” Shaw said. “Texans really, really don’t like those guys.” 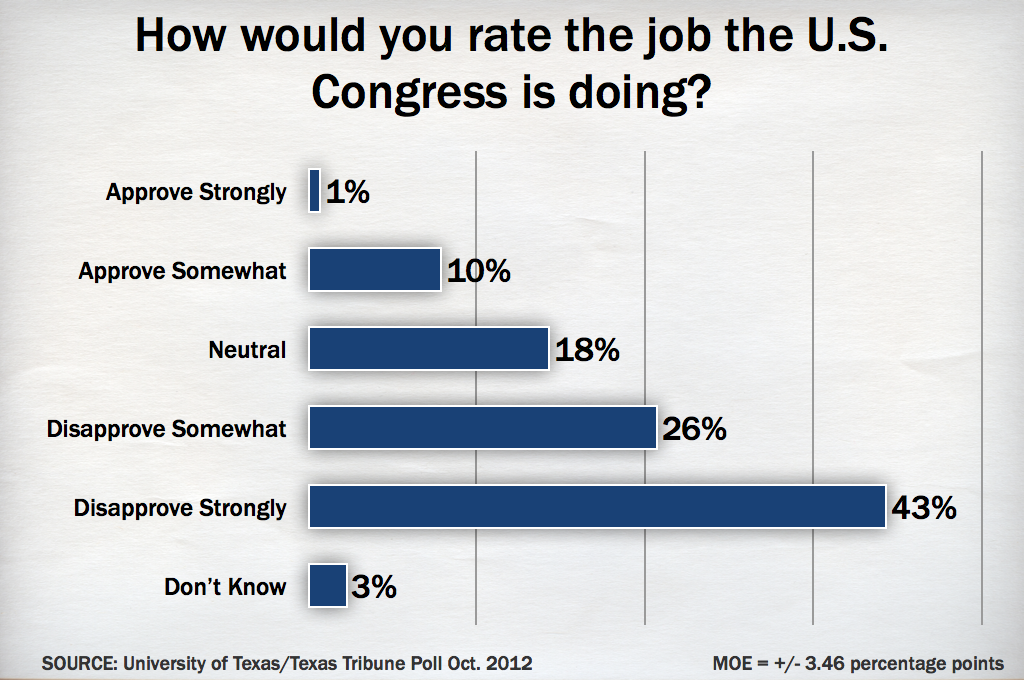 The gap in the Senate race reveals some voter unfamiliarity with the Democrat. Sadler is viewed favorably by 23 percent and unfavorably by 14 percent, but 20 percent have a neutral opinion of him, and 43 percent said they didn’t know. Cruz’s numbers were 49 percent favorable and 29 percent unfavorable. 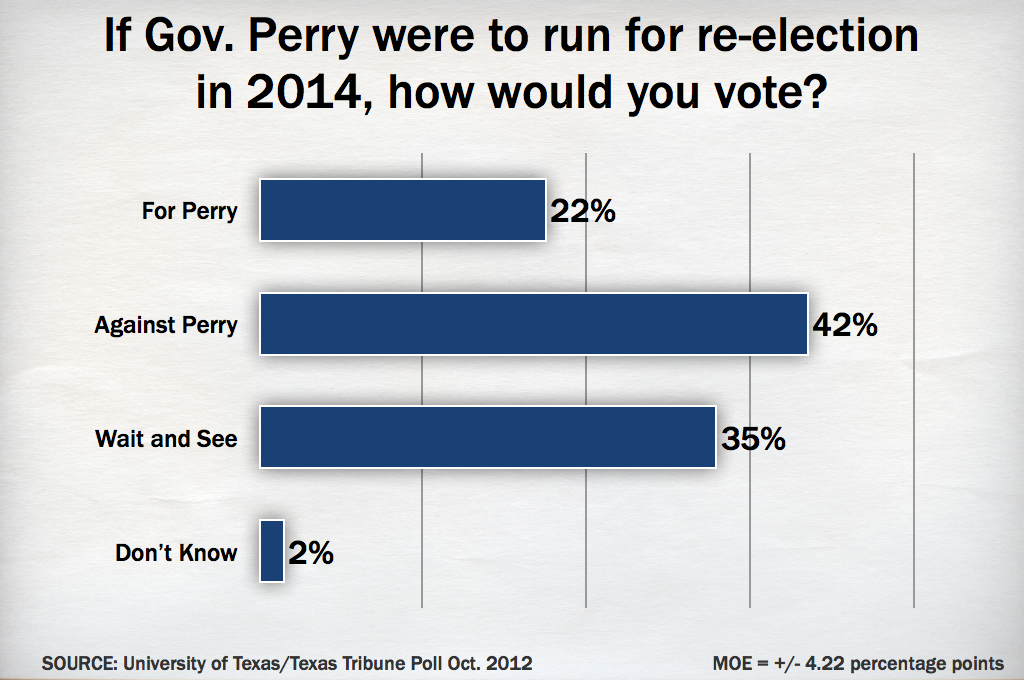 Two state officials — Perry and Attorney General Greg Abbott — were included in the favorable/unfavorable questions. The governor is favorably viewed by 45 percent of likely voters and unfavorably viewed by 42 percent (including 33 percent who have a very unfavorable opinion of him). Abbott, who is widely expected to run for governor, is less well-known — 29 percent have no opinion and another 23 percent said their opinion is neither positive nor negative. That said, 30 percent have a favorable opinion of the attorney general, while 19 percent view him unfavorably.

A fantasy 2014 Republican primary for lieutenant governor appears to be of more interest in political parlors than in the general public, with 38 percent saying they haven’t thought enough about the matchups to form an opinion. Another third said they won’t be voting in that GOP primary. Among the likely voters who answered, Lt. Gov. David Dewhurst led the pack, with 15 percent, followed by Comptroller Susan Combs, 6 percent; state Sen. Dan Patrick, 5 percent; and state Rep. Dan Branch, Land Commissioner Jerry Patterson and Agriculture Commissioner Todd Staples, each with 1 percent.

[This is the first of five stories on the latest University of Texas/Texas Tribune Poll. Tomorrow: The mood of the state.]