The political conventions that start next week semi-officially kick off the general election season, so we asked the insiders political questions this week, starting at the top of the Texas ballot.

Should Texas have term limits on its governors? Rick Perry has held the job since George W. Bush went to Washington in 2000, winning in his own right in 2002, in 2006 and again in 2010. And with that example in front of them, 56 percent of the insiders say the state should have term limits. A significant number said in the comments that that should be left to the voters, as it is now.

What about those voters, then? A large majority of the insiders — 80 percent — think Perry could lose a Republican primary to one of his fellow statewide officeholders. They had varying ideas about which one, but Attorney General Greg Abbott’s name came up most often in the comments.

A few more — 83 percent — said Lt. Gov. David Dewhurst could be defeated in a GOP primary by one of the current batch of statewide officeholders, a list that includes Abbott, Land Commissioner Jerry Patterson, Comptroller Susan Combs, and Agriculture Commissioner Todd Staples.

And we asked, finally, about Texas Democrats, who’ve been shut out in statewide contests since their victories in 1994. When will a Democrat win a statewide election here? Nobody chose 2012, and well over half of them said it would be 2018 or later (49 percent) or “not in the foreseeable future” (21 percent).

As always, we have included verbatim responses to the survey in the attachment, and list some of the highlights below. 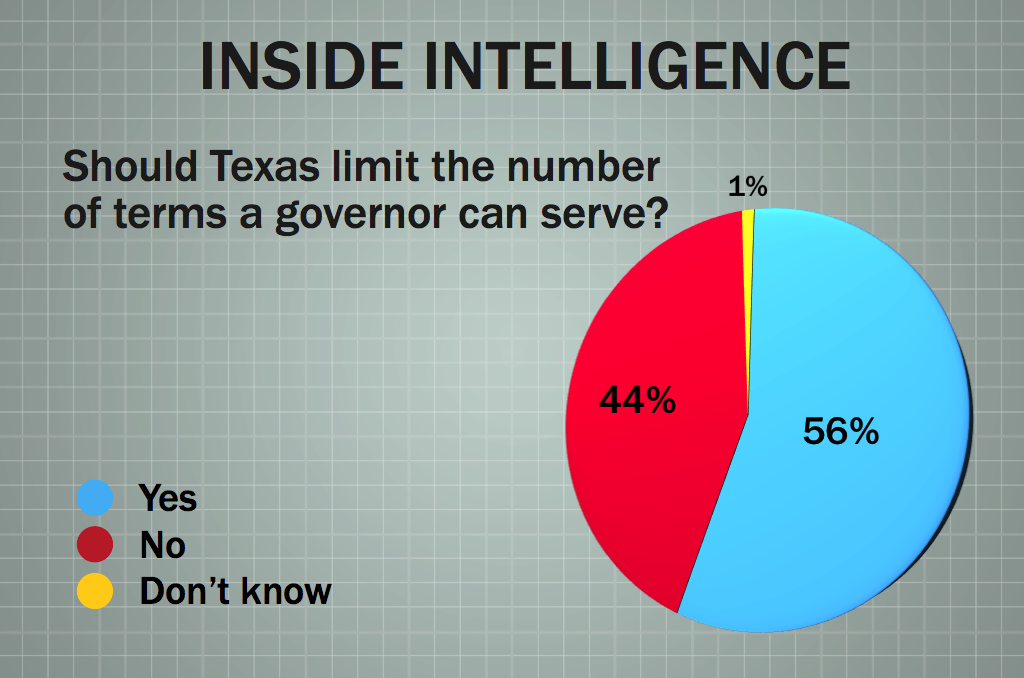 Should Texas limit the number of terms a governor can serve?

• "The voters should be responsible for that."

• "Term limits hand the keys of power to lobbyists. As a registered lobbyist I can see the problems inherent to such a circumstance."

• "Elections are held to allow voters to decide officeholders. An arbitrary limited term takes that power away. You either trust the voters and the process, or you don't."

• "Voters can take care of this.  Looking at the current situation, it appears that voters are having a little fatigue and will change things when they are fatigued."

• "Rick Perry's long tenure speaks more to the radical preferences of the sliver of the electorate that controls our elections than it does to any systemic failures."

• "I am generally against term limits but after the last 12 years I am considering changing my attitude."

• "Votes should be the ones who decide how long a person stays in office."

• "Texas has term limits already.  The voters impose it every election year.  When they have had enough of you they throw you out."

• "We have term limits, but we are too damned dumb to use them, apparently." 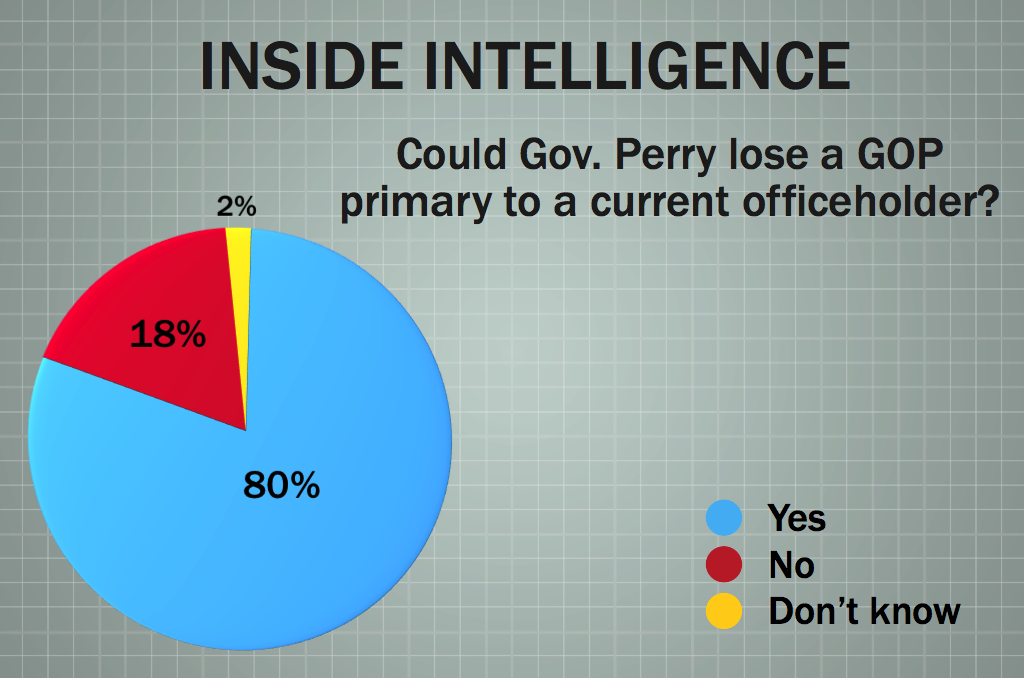 Do you believe any current Texas officeholders could successfully challenge Gov. Rick Perry in a Republican primary (If yes, please write the name in the comments)?

• "The AG has the war chest ready and the drums are drumming."

• "Greg Abbott has too much money in the bank not to make a run."

• "I think the only current Republican officeholders with a shot at beating Perry in the 2014 primary are Greg Abbott and/or Jerry Patterson."

• "Abbott because of his war chest."

• "Abbott for sure and he will run too"

• "Gen. Abbott is the no brainer. Jerry Patterson can if he wants to."

• "If the Republican Party is taken back over by the business community Greg Abbott will be the front runner in his strength to challenge Perry."

• "Next cycle could be our worst nightmare.  Lots of frustration from those ready to move up the food chain.  Abbott is obviously the guy, at least at this juncture."

• "Abbott, potentially. The combination of Perry's disastrous performance as a presidential candidate, coupled with his failed support for Dewhurst, have dispelled the myth of his invincibility in the GOP primary. Being an incumbent is not what it used to be!"

• "Greg Abbott is the only politician in Texas with the money, name ID and juice to do it. The Tea Partiers love him, and he's strong with the insiders."

• "Abbott has the best shot -- lots of money; good bona fides on conservative issues but also crime victim rights and child support; compelling personal story around his disability; and the requisite meanness." 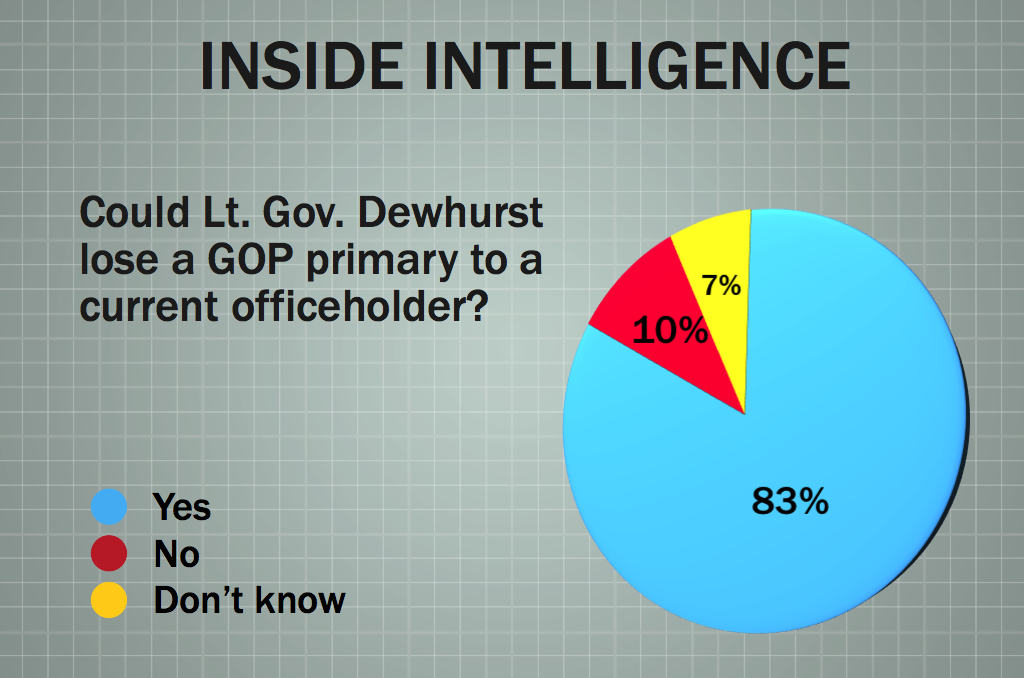 Do you believe any current Texas officeholders could successfully challenge Lt. Gov. David Dewhurst in a Republican primary (If yes, please write the name in the comments)?

• "He's weak, but not that weak. Maybe someone like Seen Dan Patrick can make an attempt."

• "Dewhurst’s money would still shout on a regular primary date."

• "Didn't that question just get answered? Seems like you don't even need to be an officeholder."

• "Any of the Four Musketeers--Abbott, Combs, Patterson, or Staples--could beat him using Cruz's blueprints."

• "Yes - already been done. The game plan to defeat Dewhurst has been written."

• "All of them except Susan Combs."

• "Combs, Staples, Patterson are obviously possibilities and are running from what I can surmise... several sitting senators . . . and given the recent US Senate race, who the heck knows?"

• "Your father-in-law who sends you all those conservative emails about UN conspiracies to kill golf? He could beat David Dewhurst in a primary now. The Dew's been exposed."

• "Arnold the Pig from Green Acres could knock off Dewhurst."

• "The last 12 months showed that Dewhurst has only one play in his playbook.  Jerry Patterson has a deep resonance with the typical Cruz voter and Jerry will not run a conventional campaign.  Those factors, and the size of Dewhurst's huge statewide loss on July 31, make it impossible to say that Dewhurst is the front runner - as of today." 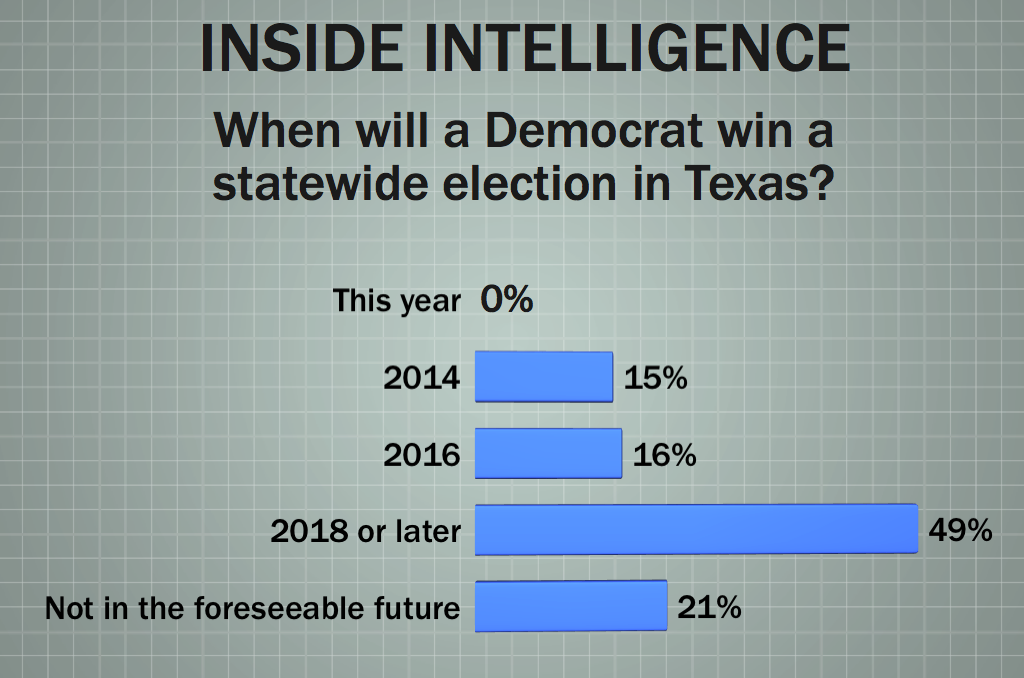 No Democratic candidate has prevailed in a statewide election in Texas since 1994. When do you think a Democrat will win?

• "Better Question: When will the Democrats put forth a truly viable statewide candidate for any office?"

• "Perry could conceivably lose to a conservative, pro-life Democrat if he decides to run again.  The question is whether Democrats would be smart enough to nominate a conservative instead of just waiting for their ship to come in with the long awaited demographic shift."

• "There is a statewide Democratic Party in Texas?  They ought to let somebody know."

• "Texas Democrats are giving the Republican Party the luxury of ignoring the center.  Republican fights create an opening for Dems ONLY IF the Dems offer something Texas voters want.  Dems seem to have a strategy of waiting for Texans to come to their senses and realize how great the Dem platform is.  That is not going to happen in large numbers in the next 20 years.  For change to occur in statewide elections, the Dem party will have to move toward the voters and compete as Business Democrats.  In other words, if Texas Dems continue to hide out in their well-fortified liberal bunker, they should not expect to have any voters joining them inside - AND in the meantime Republicans can fight among themselves in all kinds of outrageous and extreme ways, without worrying about losing a general election."

• "Until the Ds wake up and aggressively market themselves as pro-business, they won't win.  And as long as the Rs continue to build Hispanic support, the Ds won't win."

• "Democrats have a weak bench, no money, and no confidence. Republicans win 70 percent of the Anglo vote and Anglos cast almost 70 percent of votes cast in statewide elections. The Anglo share of votes cast will fall slowly and the Hispanic share will rise, buoying the Dems, but it will be a slow process. Imagine the money that will come in against the Dems as they start getting close."

• "Rafael Anchia and Julian Castro are rising stars.  But, if one wants to play the race card there is parity with Cruz winning.  His win might be a major set back for Democrats who want to push the myth that Republicans are racists and cannot elect Hispanics.  If he and Abbott can continue to strengthen outreach to Hispanics the Democrats might be in for a long time in the woods."

• "It will happen, but probably when least expected. A new face, probably Hispanic with funding and energy could make it happen."

• "A Democrat will likely win Governor's race in 2014 if Perry runs for re-election and is re-nominated."