Texas’ Republican primary for U.S. Senate is close — and could be headed for a July 31 runoff — with Lt. Gov. David Dewhurst holding a single-digit lead over former Solicitor General Ted Cruz, according to the latest University of Texas/Texas Tribune poll.

Dewhurst had the support of 40 percent of likely voters, followed by Cruz at 31 percent. Former Dallas Mayor Tom Leppert had 17 percent and broadcaster and former football player Craig James was at 4 percent, with five other GOP candidates bringing up the rear.

Daron Shaw, a UT-Austin government professor and co-director of the poll, said Cruz has been able to position himself to the right of the lieutenant governor for a May 29 Republican primary where that's a big advantage — and he's done that in a year in which insurgent candidates have been scoring big wins against establishment Republicans.

In Indiana, longtime U.S. Sen. Richard Lugar fell to state Treasurer Richard Mourdock in a GOP primary race that some framed as an establishment-versus-insurgent result (it was also a cautionary tale for incumbents falling out of touch with constituents). In Nebraska, state Sen. Deb Fischer, an outsider candidate backed by Sarah Palin, defeated state Attorney General Jon Bruning and state Treasurer Don Stenberg in the Republican primary for an open U.S. Senate seat after the two focused their attacks on each other and left her a path to victory. A good showing by Cruz could be read as another thread in that fabric.

"If they're in a runoff, Dewhurst is in trouble," Shaw said. 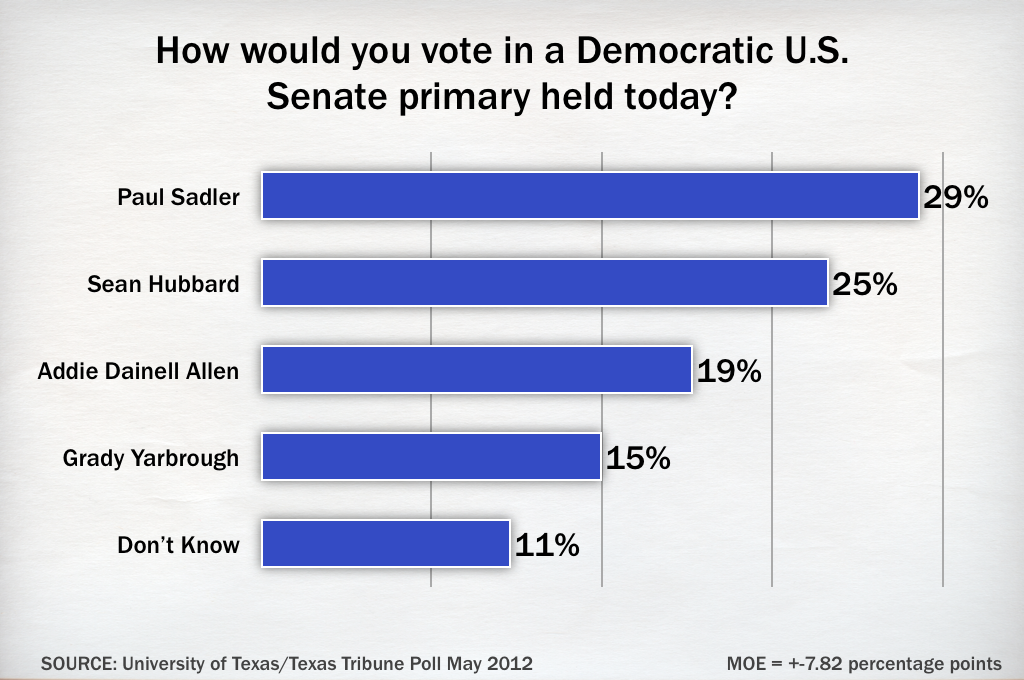 The Democrats, too, could be building to a July finish, probably between former state Rep. Paul Sadler and Sean Hubbard, according to the poll.

Sadler led the Democrats with 29 percent, but was followed closely — and within the poll's margin of error — by Hubbard. Two other candidates — Addie Dainell Allen and Grady Yarbrough — also registered double-digit support.

The Republican race hasn't changed significantly since the February UT/TT poll, in which Dewhurst tallied 38 percent, an 11-point lead on Cruz.

But Dewhurst, the front-runner throughout the race, hopes to win the Senate primary with no runoff, and is pressing to widen his lead. He opened the final two weeks of the campaign — as this poll was ending and early voting was beginning — with a sally of ads attacking Cruz. A Super PAC, legally unaffiliated with Dewhurst's campaign but run by the lieutenant governor's former chief of staff, began an expensive negative campaign targeted at Cruz as the early voting began. Cruz, with less money and less frequency, is hitting back, and the Washington, D.C.-based Club for Growth is advertising heavily on his behalf, hoping to back another insurgent conservative, Cruz, against an establishment Republican in Dewhurst.

"It's not surprising that David Dewhurst is still in front," said poll co-director Jim Henson, who teaches government at the University of Texas at Austin and runs the Texas Politics Project. "We're seeing the advantages we expected him to have from the beginning of the campaign."

But he said the number of contenders has worked against Dewhurst. "Ted Cruz and Tom Leppert are claiming some real estate," he said. Their numbers are keeping the front-runner short of the majority he needs to avoid a runoff.

"The extra time played to the benefit of Cruz and Leppert," Henson said. The Senate race is no longer overshadowed by a competitive presidential primary, and they've been able to get attention that had been denied them. Leppert's numbers have improved since February, when he was tied with James. Leppert appears to have earned enough support to be a spoiler, if not a contender. He is doing best in the Dallas-Fort Worth area, where he was known before this race, but he's still in third place even there.

Shaw said Cruz's performance so far shows that money isn't everything. Dewhurst, first elected to statewide office in 1998, has far more money and has spent far more of it, but he remains short of the 50 percent he needs against an array of competitors who've never attempted statewide campaigns. "There are alternate ways to gin up support," Shaw said. "Money is necessary, but it's not sufficient."

Dewhurst is running a two-pronged attack in his marketing, building himself up and tearing Cruz down. "He's in a classic front-runner's dilemma: To what extent do you engage someone who's behind you, and to what extent do you just ignore them?" Shaw said. 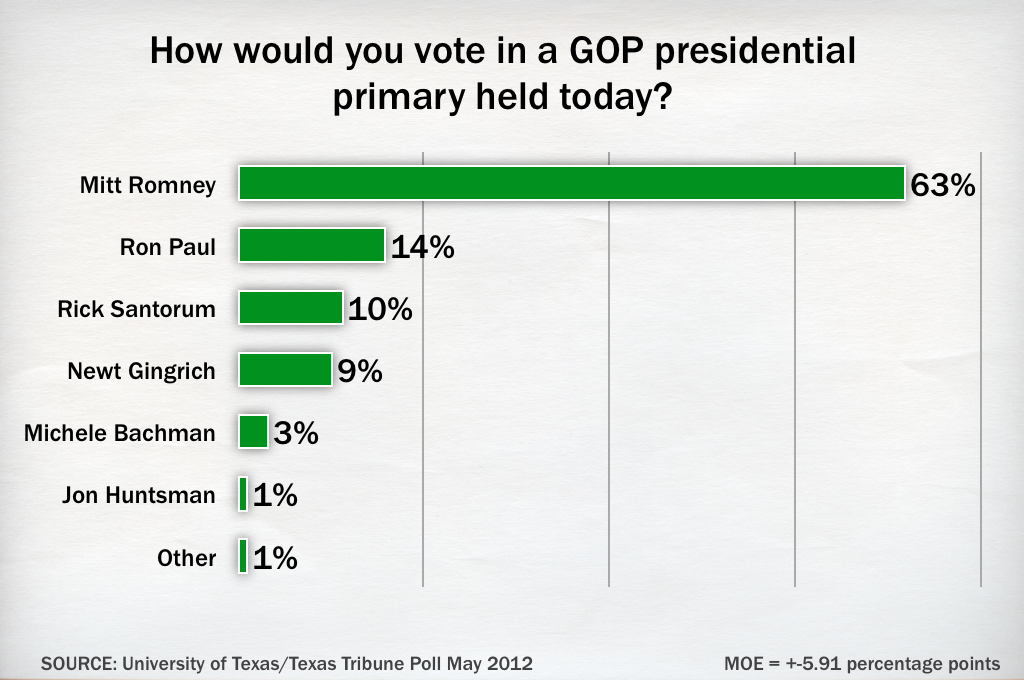 At the top of the ballot, the competitive tension has come out of the Republican presidential race. Former Massachusetts Gov. Mitt Romney held a comfortable lead over everyone else on that ballot, with the support of 63 percent of Republican voters. U.S. Rep. Ron Paul of Lake Jackson, who is still in the race but has suspended many campaign activities, had 14 percent, followed by a number of candidates who have dropped out but whose names remain on the Texas ballot: Rick Santorum, 10 percent; Newt Gingrich, 9 percent; and Michele Bachmann and Jon Huntsman, with 3 percent and 1 percent respectively.

That's a big change from the February UT/TT poll, which found Santorum well in front, and Romney in third place. The results of Texas' delayed primary could, in that race, be vastly different from what they might have been had the primary remained on schedule in March.

Now it belongs to Romney, and he would go into November’s general election with a commanding lead over President Obama in Texas, harvesting 55 percent to the incumbent's 35 percent in the poll. 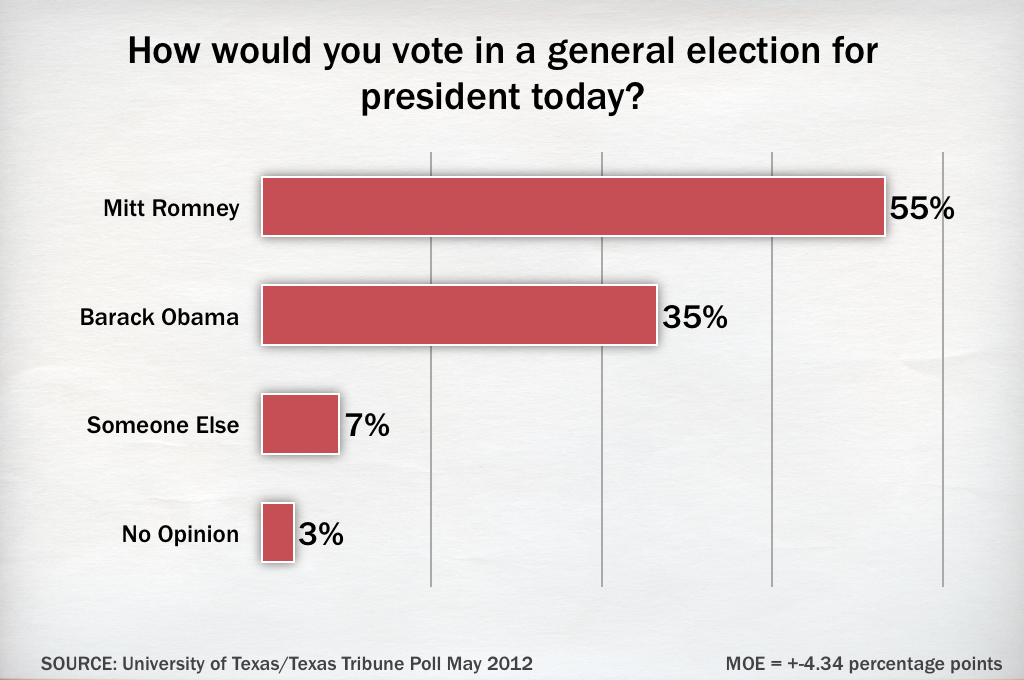 Many voters were initially undecided about the Senate race even with the primaries upon them. When first asked about the Republican Senate primary, 22 percent said they hadn't decided who would get their vote. Asked if they had to make a choice, that dropped to 2 percent. The numbers in the Democratic primary were even more striking: Initially, nearly 85 percent said they had not decided. Asked how they would vote if they had to decide, the "don't know" contingent slipped to 9 percent.

The poll also sought Texans’ thoughts on some of the candidates, officeholders and institutions.

Congress is in worse shape: Only 10 percent of Texas voters approve of the job that the members of the legislative branch are doing, while 71 percent disapprove (and 48 percent of those disapprove "strongly").

In the Senate race, voters have net favorable views of all but one of the GOP candidates.

The UT/TT internet survey of 800 Texas voters was conducted May 7-13 and has a margin of error of +/- 3.46 percentage points. Questions asked only of Republican or Democratic voters have larger margins of error, as indicated. And "likely voters" were defined as those who indicated they were "somewhat" or "extremely" interested in politics and who voted in "every" or "almost every" election in recent years.