Lt. Gov. David Dewhurst leads the Republican field of candidates for the U.S. Senate, but former state Solicitor General Ted Cruz is running second, according to the latest University of Texas/Texas Tribune poll.

Dewhurst led with 38 percent, followed by Cruz at 27 percent, and former ESPN analyst Craig James and former Dallas Mayor Tom Leppert each with 7 percent. Only two other candidates — Glenn Addison and Lela Pittenger — even registered; each got 1 percent.

In October, Dewhurst had 22 percent to Cruz's 10 percent; the two candidates have grown at about the same pace, and the gap between them is close to what it was four months ago.

Dewhurst, Leppert and James have run television ads; the Washington-based Club for Growth has run ads on Cruz's behalf. None of the candidates has advertised heavily, in large part because the date of the primary hasn't been set. 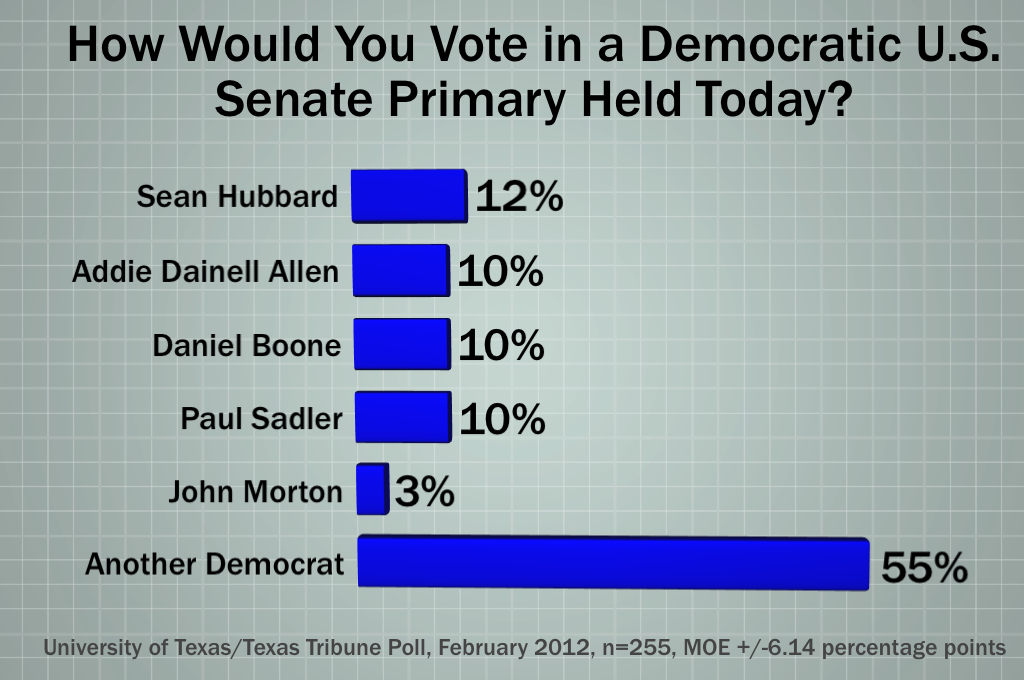 Unsettled might be the best description of the race for the Democratic nomination for Senate, where 55 percent said they would prefer another Democratic candidate to those who are running.

The named candidates were clustered in a statistical tie: Sean Hubbard, 12 percent; Addie Dainell Allen, Daniel Boone and Paul Sadler, each at 10 percent; and John Morton with 3 percent.

"David Dewhurst is roughly splitting the extremely conservative primary voters with Ted Cruz," said poll co-director Jim Henson, who teaches government at the University of Texas at Austin and runs the Texas Politics Project. "That's not a sign of failure or defeat, but it is a yellow flag."

Henson attributes that more to style than to substance, but he said it could help the challenger.

"Cruz is in the advantageous position right now of, for the most part, defending his ideas against Dewhurst's record," Henson said. "In the last few cycles, that's been a good place to be, and not to be the person who's having to defend your actions in government." 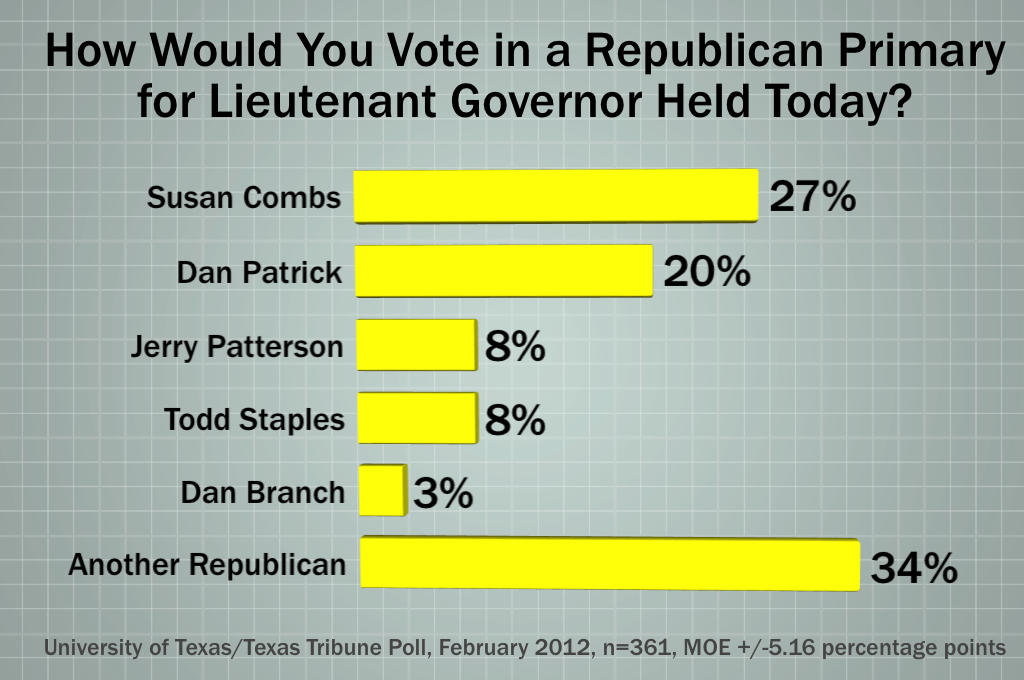 The race to succeed Dewhurst in 2014 — a speculative venture based on the idea that he will become a senator or drop out of a re-election bid — finds the same two candidates at the front of the pack.

Comptroller Susan Combs is in the lead, and state Sen. Dan Patrick, R-Houston, is not far behind, though the number of voters hoping for another candidate remains high.

Combs got the support of 27 percent, followed by Patrick at 20 percent. Texas Land Commissioner Jerry Patterson and Agriculture Commissioner Todd Staples were tied at 8 percent, and state Rep. Dan Branch of Dallas got 3 percent. No Democrats have openly expressed an interest in that race.

A third of the respondents — 34 percent — said they would prefer another Republican candidate to those listed.

In the October 2011 UT/TT poll, Combs was at 14 percent, Patrick was at 9 percent and Patterson had 5 percent. At that time, two-thirds of the voters were undecided.

"We're seeing the emergence of credible candidates," said Daron Shaw, a UT-Austin government professor and co-director of the poll. It's early for that race — which won't happen until 2014 — and it's really a test of name recognition. The comptroller is frequently in the paper, and Patrick is a radio talk show host in the state's biggest metropolitan area. "That race is still volatile. It's almost like a Google count of who gets mentioned most."

With the field of that race open, and with voters undecided on the other races, the poll asked about candidate attributes. A large majority of voters — 74 percent — said it is "very important" that candidates share their views on issues. Another 21 percent called that "somewhat important."

As in the presidential poll results, insurgent conservative candidates are giving more institutional Republicans a run for their money. Former Pennsylvania Sen. Rick Santorum is leading the Republicans running for president, and Cruz and Patrick are looming in the rearview mirrors of the front-runners in their races.

"It's not so much that Texas is Republican," Shaw said. "It's that it's very conservative."

The latest UT/Texas Tribune internet survey of 800 Texas voters was conducted from Feb. 8-15 and has a margin of error of +/- 3.46 percentage points. Questions asked only of Republican or Democratic voters have larger MOEs, as indicated.