We'll get to the details soon enough, but the headline is that our insiders think Lt. Gov. David Dewhurst is the candidate to beat in next year's U.S. Senate race.

The details are interesting. Former Texas Solicitor General Ted Cruz is the favorite of 24 percent of the insiders for the primary and 18 percent in the general election. They think Ricardo Sanchez, the only declared Democratic candidate, will win that primary, but only 2 percent think he could win the general election. Another 10 percent think that Tommy Lee Jones, whose name keeps coming up, would win the Democratic primary.

The levels of certainty are interesting. Only 3 percent chose "don't know" as their answer for the Republican primary. On the Democratic side, that shot up to 36 percent. In the general, just 7 percent took that option.

No other candidates broke the 4 percent mark, either in the primary or the general.

We allowed open answers on each of the horse-race questions. A full set of those is attached, but here's a sampling: 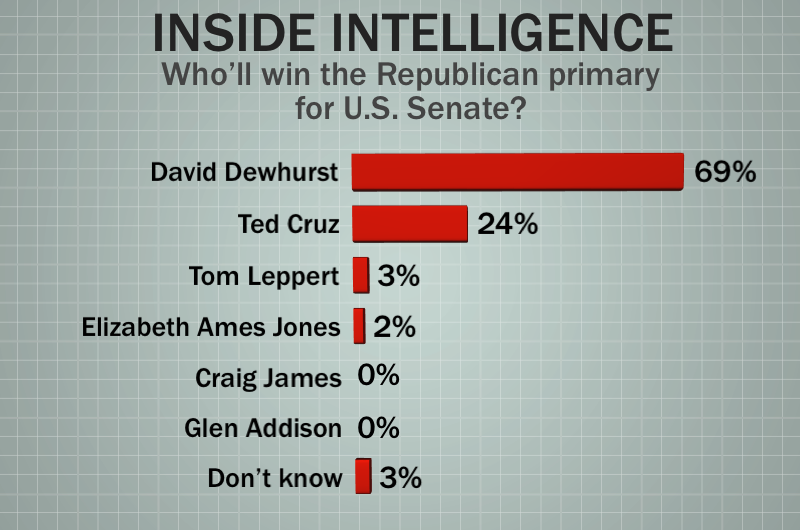 • "Might take a runoff, but don't see anybody else with the $$$ to win against Dewhurst"

• "I realize that Cruz is building up names hand over fist, but Dewhurst has some good bragging rights with the right after this session, and he has a ton of cash which, in a federal race, is a serious political asset. His downside is he is not much of a speaker or glad hander, but in a primary like this it that may be overrated."

• "Is this the list? When's the filing deadline? Not til December? This question is best left unanswered for the moment."

• "The tea pot is hot in this state. Cruz will enjoy strong grassroots support and will draw a sharp contrast with Dewhurst."

• "Dewhurst is obviously odds-on favorite. If TEA gang gets organized for Cruz, it could be interesting."

• "The real winners will be the political consultants that work for Dewhurst and Leppert. They are going to make enough money to pull the USA out of the economic slump." 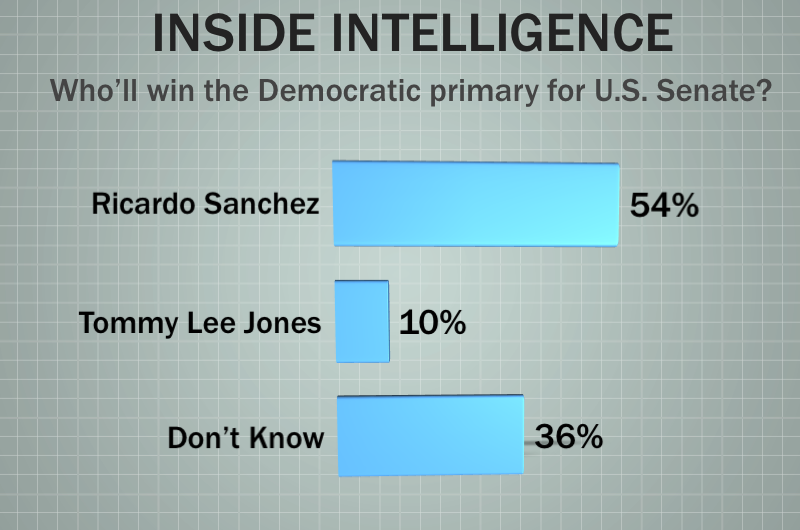 • "The US Senate race is no country for old men."

• "If Democrats will put some money into this, Sanchez provides an incredible opportunity: a Latino military hero is an image Latinos identify with and he could drive turn out in the general."

• "Again, perhaps there'll be better choices. Not that Tommy Lee Jones isn't a good choice. But I don't remember him saying anything about running."

• "Some other yet to be identified candidate." 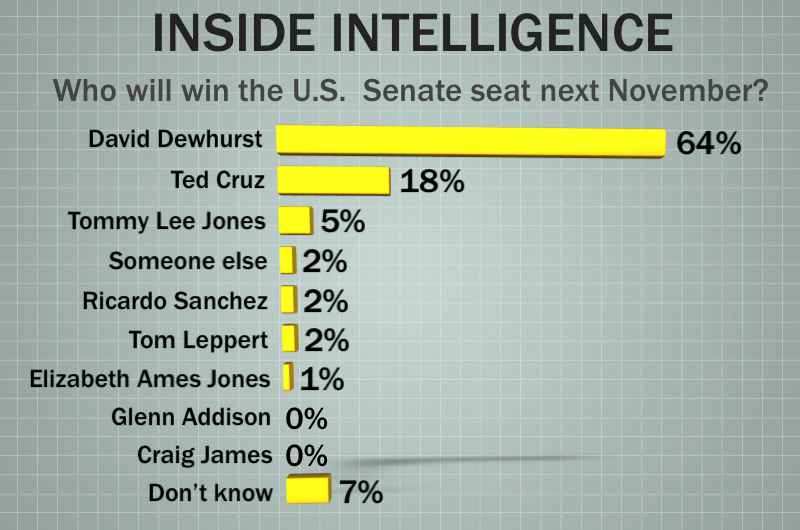 Who will win the U.S. Senate seat next November?

• "The 2012 election is going to see one of the most overwhelming "throw the bums out" results in decades, if not in history. Someone who has stature, credibility and NO elected office experience has a real shot."

• "Cruz will effectively exploit the anti-Washington sentiment in this state. The smarter minds in the GOP will understand he can be another Rubio, spreading the enduring-if-not-empirical ethic of Horatio Alger and helping to blunt the ugly nativism running rampant through the party."

• "Dewhurst starts as frontrunner. His race to lose."

• "I believe there has been a serious oversight in this list. The field is not yet settled for this race. Watch out for Michael McCaul. He has the conservative record to win a Republican primary, the cash resources to beat Dewhurst and would run an efficient campaign with real professionals, contrary to the other candidates currently in the field."