Four months of hearing about the state's budget problems hasn't changed the minds of Texas voters. According to the latest University of Texas/Texas Tribune Poll, registered voters still want lawmakers to cut the budget, but they still oppose the major cuts in education and health and human services that cutting the budget requires.

Legislators are working out the final details of a 2012-13 state budget that cuts $15 billion from current spending, including $4 billion in cuts to public education and huge cuts in variety of health and human services programs. A final vote on that budget will come this week — the last of the 20-week regular legislative session. 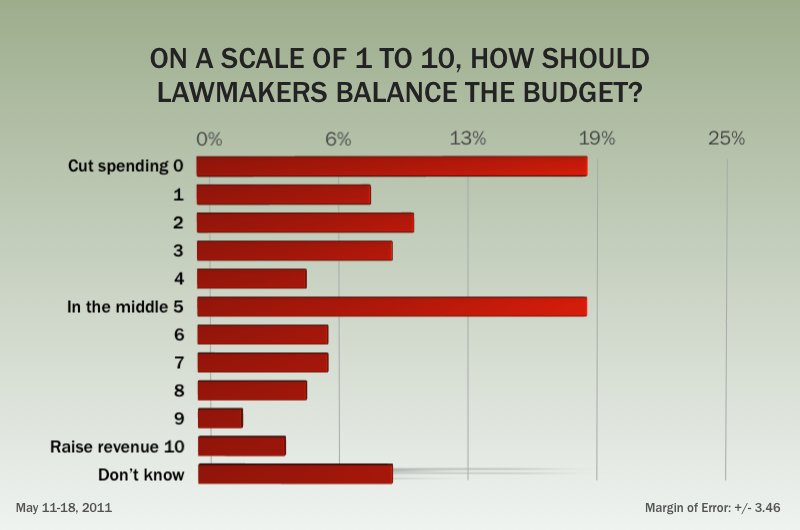 Voters want the cuts — until specific programs are on the chopping block. Poll respondents were asked, on a scale of 0 to 10, whether they preferred to balance the next budget with spending cuts, by raising revenues or with something in between. The answers this time were about the same as in our February poll, with only 4 percent choosing to balance the books with new revenue and 18 percent saying it should all be done with cuts. Another 18 percent landed right in the middle. Broken down by political preferences, the average Democrat landed at 5.8 on the scale, or close to the middle but a little on the side of raising revenue. The average Republican scored 2.3 — much closer to the budget-cutting end of the scale. And the average independent was a budget cutter, too, scoring 3.6 on average.

"Republicans are much more intense about cutting the budget than Democrats are about increasing revenue," says pollster Jim Henson, who teaches government and runs the Texas Politics Project at the University of Texas.

"They're not giving [officeholders] any clear guidance, but if you look at the partisan breakdown, you're seeing an overwhelming dominance of the Republican position, particularly on fiscal matters," he says. 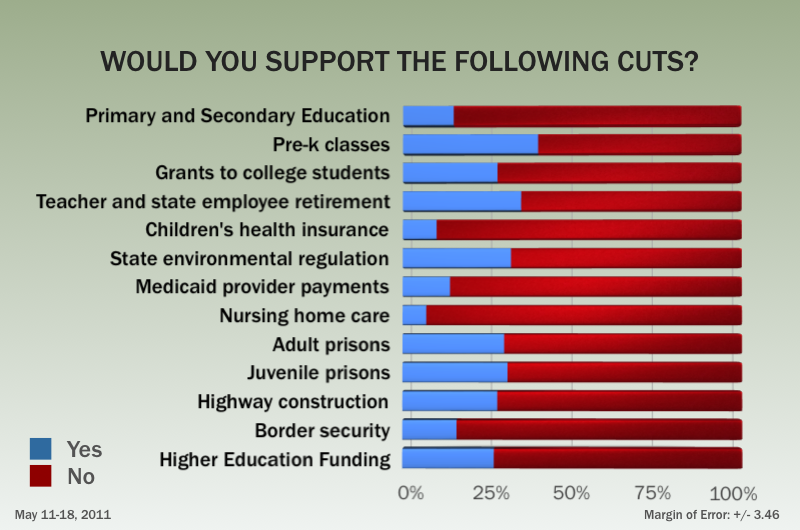 When asked about specific cuts, those voters show their divided preferences. An overwhelming 85 percent oppose cuts to public education; 90 percent don't want to cut the Children's Health Insurance Program; 86 percent say no to cutting payments to Medicaid providers like doctors and hospitals; 93 percent want to avoid cuts to nursing home funding; and 84 percent are unwilling to cut funding for border security.

The legislative debate over what to do with the budget doesn't appear to have convinced voters that any particular cuts are good ideas.

"People say they're paying attention to the legislative session. Either they're not, or the conversations are not having much impact — they're not moving the dial much," says pollster Daron Shaw, also a professor of government at UT. 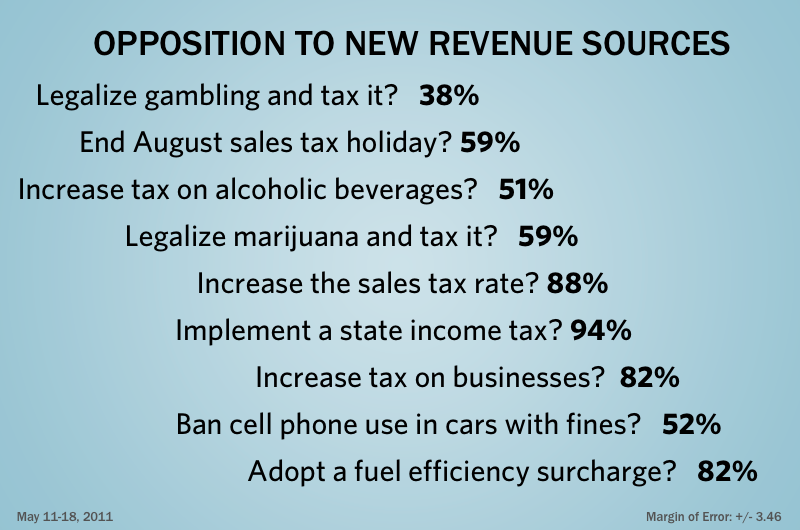 "It's an internal conversation. If their point was that cuts have to be made — to lay the predicate for what they're doing — they haven't done that," Shaw says.

How would they come up with the money? As in the February poll, they like gambling as an option, with 62 percent saying they would support casinos as a way to raise money. Two other items came close, with a higher taxes on alcoholic beverages getting support from 49 percent of the voters and 48 percent saying they'd support a state law making it illegal to use cell phones while driving and fining violators.