Last year, with Democrats controlling the U.S. House of Representatives, Texas’ delegation of Republicans was largely shut out of power.

What a difference an election makes.

Today, with Republicans now at the helm, Texas has the largest GOP delegation in Congress, and those members have relatively high seniority, spots on key committees and seats at the leadership table — evidence, observers say, of the state’s sway inside the Capitol.

Texas members in both parties have, on average, 11 years of experience in the House, more than 39 other states’. Its senators also rank higher than those of 30 other states.

Seniority, of course, is just one of many factors that affect a state’s power in Congress. Members’ political parties, their personalities and their respective strengths with forces outside the Capitol — like organized labor or the Tea Party — also play a role.

Partisan affiliation is especially important, even more so in the House, where committee assignments and leadership roles are decided by those in the majority and, in some cases, internally imposed term limits. That is not necessarily the case in the Senate, where members have much more individual power based on seniority and the rules.

When Republicans took control of the House this session, for example, they seized powerful committees from senior Democrats, an effort that benefited Republican members from Texas.

Texas Democrats on average have more seniority than Texas Republicans in the House, about 13 years to just under 11, respectively. But there are only nine Democrats in the state’s delegation, out of 32 total, now that three long-serving members lost their seats in November. Rep. Eddie Bernice Johnson, D-Dallas, has the most seniority at 18 years. 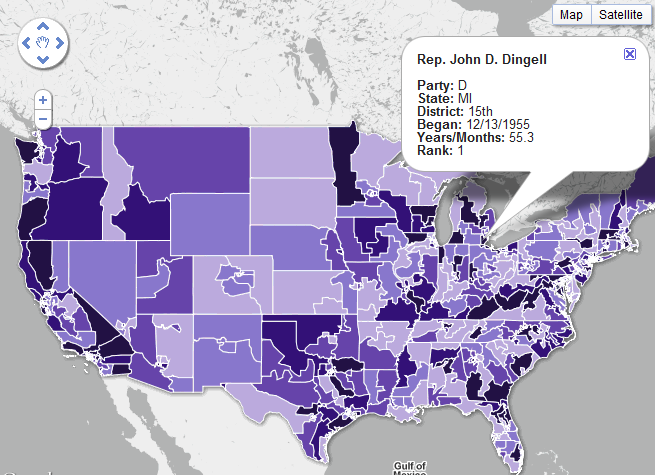 For example, Rep. Pete Sessions of Dallas heads the National Republican Congressional Committee, which raises money and recruits political candidates in races across the country. Sen. John Cornyn has a similar leadership role in the upper chamber, increasing his standing among newly elected Republican colleagues.

In the House, three of eight members on the Republican leadership team are Texans, including Sessions. Rep. Jeb Hensarling of Dallas heads the House Republican Conference, a group that helps GOP members with strategy and messaging. Rep. John Carter of Round Rock is the conference’s secretary.

In the Senate, which is still controlled by Democrats, Sen. Kay Bailey Hutchison, first elected in 1993, is the senior Republican on the  Commerce, Justice, and Science subcommittee of the Appropriations Committee. She also is the senior Republcan on the Commerce, Science, and Transportation Committee. She has announced her retirement in 2012, which will most likely reduce the state’s power in the upper chamber.

In the House, Texas has more Republicans than any other state, with 23, followed by California (19), Florida (19) and Ohio (13). That figure will most likely rise after congressional redistricting this year. Texas’ strong population growth increased its House representation by four seats — more than any other state.

“What helps us in D.C. is the fact that we’re the largest Republican delegation in town,” said Rep. Lamar Smith, Republican of San Antonio and chairman of the Judiciary Committee. “Plus we’re cohesive. We tend to vote in a similar fashion.”

The delegation’s position of power helps Texas by ensuring it gets its fair share of financing, members and observers say. But it also gives members the ability to influence legislation and write bills that have a chance of passage. And it helps garner news media coverage.

“It’s not just a matter of bringing dollars home,” Smith said. “If you’re in a leadership position, you’re helping Americans in other ways.”

Texas is no stranger, of course, to influence in Congress, going back to the era of Sam Rayburn, speaker for much of the 1940s and ’50s, and Lyndon B. Johnson, who before becoming president was a powerful Senate majority leader.

More recently, the state produced other powerful figures in Congress, like Tom DeLay, the former House majority leader, who helped increase Texas’ Republican delegation through redistricting in 2003. Bill Archer, R-Houston, served 30 years in the House and headed the Ways and Means Committee, which helps set national tax policy. And Phil Gramm, a Republican senator, was an influential conservative thinker who helped shape the nation’s banking laws.

To be sure, Texas Democrats also had their say in recent years.

“On the Democratic side, we had people in power,” said Rep. Henry Cuellar, D-Laredo. “Now that Republicans are in charge, my Republican colleagues have clout.”

Cuellar, a former member of the Texas Legislature, believes that the state is “blessed” because of its size in that the party in power does not necessarily determine Texas’ ability to influence legislation and financial decisions in Washington. He said Democrats also still had a voice on budget issues because of President Barack Obama, but he acknowledged the Republicans’ dominance through their majority.

“I have a bias,” he said, chuckling. “I’d rather have a Democratic majority.”

Editor's note: A previous version of this story listed an incorrect committee assignment for Sen. Kay Bailey Hutchison, based upon dated information on her Senate website. The error has since been corrected.