Most of our insiders — 92.6 percent — think Joe Straus will still be the speaker after January 11, but they don't sound confident that a Republican supermajority will bring peace and harmony to the Pink Building.

Only a dozen of this week's 163 respondents think there will be a new speaker, and their choices varied between Warren Chisum, who's declared, Larry Taylor, who hasn't, and "someone else." Tom Craddick got a vote, and so did Dan Branch, a Straus supporter. Neither has indicated any interest in being speaker in 2011.

Almost as big a majority — 87.1 percent — think the Senate should keep requiring a two-thirds majority to bring up legislation for consideration. 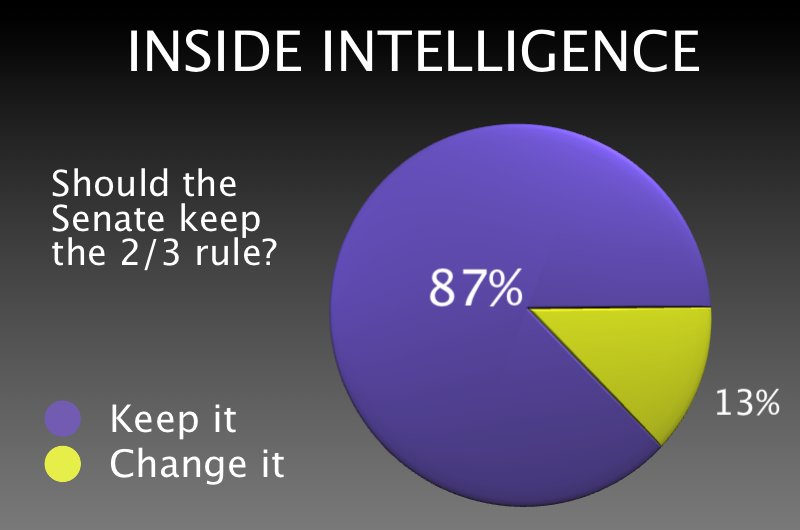 Inside Intelligence is a new weekly feature we're doing with our sister publication Texas Weekly: A survey of insiders on questions of the moment. We sent questions to more than 450 lobbyists, consultants, former officeholders and others to check the collective pulse of the people closest to the action. We didn't ask current officeholders or their staffs, and we used an Internet service that prevents non-invitees from voting and prevents invitees from voting more than once. We'll do a new one every week (though we skipped last week on the theory that voters had enough survey results to look at in election week). This time, we got 163 respondents who identify themselves as Independent (27.6 percent), Republican (40.5 percent) and Democrat (31.3 percent).

This week's open-ended question was, "How do you think the election outcomes will affect the legislative session ahead?" A few of the answers (the full set is attached):

• "I think some of the more polarizing issues will get further than they have in the past but not necessarily pass. There will be a huge amount of infighting among Republicans, which we are already seeing in the speaker's race."

• "Texans clearly want a much more conservative set of policy outcomes. The voters clearly shut off debate on new revenue sources in favor of strict fiscal accountability and responsibility."

• "Some sort of voter ID bill and immigration reform bill will pass. And any chance for increasing the gambling footprint went away on election night."

• "With almost all of the winners pledging no new taxes, it would appear major cuts to state spending in health care, education and infrastructure development are in the offing. And the Republicans will be able to make the DeLay plan look modest as they claim 75% of the Congressional seats in the delegation."

• "Conservatives will get everything they want and more: huge budget cuts for social services, illegal immigration legislation, voter identification legislation, more tort reform legislation, and redistricting that cements Republican control of the state for the next decade. Thank you Texas Democratic Party!"

• "It will obviously embolden conservative Republicans, so expect a stream of early votes on social issues before reality sinks in and the sober business of budget cutting takes all the fun out of the session."

• "The elections made redistricting even harder. More Rs now will have to be paired. Passing a budget became easier, however. The Rs simply will cut and cut and cut."

• "Train wreck. R's want no tax hike. D's don't have the votes or a plan. Let the Special Sessions begin."

• "Move to the right please! The huge Republican numbers will dictate a number of conservative issues will likely be passed (Voter ID, Immigration, additional tort reforms, etc). Shake-up of key committee leadership will also occur due to the large Republican majority. Finally, cuts in state services will be deep and very little can be done by slim Democrat numbers."

• "If Republicans are unified (big if), budget and redistricting get done in the regular session. Looks like legislators will have the summer off."