Mark Jones, political science chair at Rice University, has released another interesting analysis of partisan behavior inside the Texas House — this time measuring the Democrats’ “stealth influence” during the 2009 legislative session.

Using the liberal-conservative score, Jones recently ranked House members’ ideology based on their voting activity. He builds on that work in a new report focusing on “partisan agenda control.” That term describes a general effort by legislative leaders at levels to limit votes on issues that are opposed by a majority of their parties’ caucuses. (They also of course seek votes on issues supported by their members).

Jones measures this phenomenon by examining data on parties getting “rolled,” a term used to describe instances in which a party majority loses a final passage vote, or “FPV.” Typically, the majority party has a much lower “roll rate” because its members are in control of the agenda, while the minority party roll rate is higher because of its relative lack of influence.

In the final session of Democratic Speaker Pete Laney's tenure in 2001, a majority of the members of the Democratic Party were on the losing side (i.e., the party was rolled) on only 7 percent of FPVs, while the Republican Party was rolled on 42 percent. In 2003, with the transition from a Democratic to Republican majority, and Republican Speaker Tom Craddick's ascendancy, the values flipped with the Republican Party rolled only 4 percent of the time and the Democratic Party rolled 47 percent -- proportions which remained relatively unchanged in 2005 (14 percent and 46 percent). The 2007 session saw a growing partisan stalemate in the House, as well as less assertive leadership behavior. While Craddick was able to ensure a low Republican roll rate (5 percent), the Democratic roll rate was not much higher (8 percent), suggesting at this point Craddick's powers were much more reactive than proactive.

In 2009, though, Democrats had more influence than they’ve had since 2001 — the last session in which their party controlled the majority and the speaker’s chair, according to Jones’ analysis. He argues that first-time Speaker Joe Straus sacrificed agenda control by building a coalition of more moderate Republicans and the overwhelming majority of Democrats.

This speculation would help explain why the roll rate of the minority Democratic Party was a mere 3 percent in 2009, but the roll rate of the majority Republican Party was 32 percent. While it would appear the Democratic House leaders worked to ensure that legislation that was opposed by a majority of Democrats never made it to the floor for a FPV, one cannot say the same thing about their Republican counterparts.

Jones also visualized the voting data, showing what he calls a “dramatic shift” in win rates for the parties since Laney’s tenure as speaker ended, and with the ouster of former speaker Craddick, who held the gavel for the following three sessions. These graphs display each representative’s “win rate” vertically, while aligning them from left to right based on liberal-conservative scores. 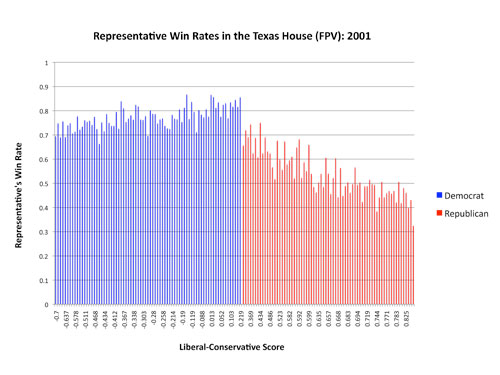 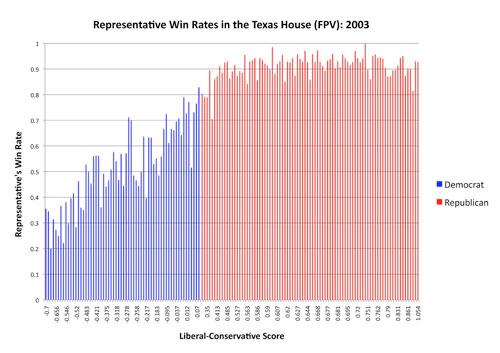 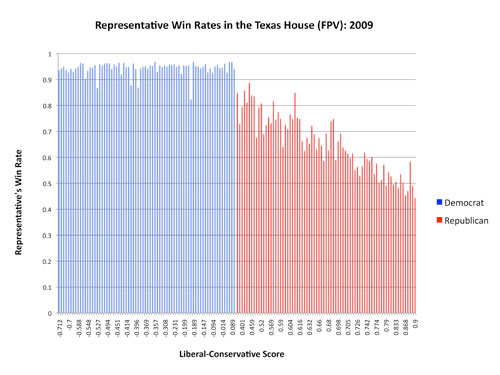 Jones concludes (see the full post for more on the methodology and results):

Contrary to common public perception, these data indicate that the Texas Democratic Party appears to have played an integral role in the legislative process during the 2009 House session.... [I]n many respects, Democrats were near-equal partners in House legislative governance during the 2009 session, either explicitly or implicitly backing virtually all legislation that was passed during that year.