When U.S. Sen. Kay Bailey Hutchison lost the Republican primary for governor last March, her biggest supporters — the people who gave more than $20 million to her campaign — became political orphans. But many of them have landed with either Republican incumbent Rick Perry or Democratic challenger Bill White, demonstrating a political or geographical or some other kind of affinity for the general election.

A Texas Tribune data analysis shows that more than $1 million has flowed to Perry from Hutchison supporters since the primary, while at least $675,000 has gone to White. The White number is bigger than you might expect, considering the money is coming from people who initially wanted a Republican governor. But some are Democrats who gave to Hutchison before it was clear White was going to run, and some are Republicans and independents who decided before this all started that Perry has been in office long enough, even if that means supporting a Democrat.

The analysis does not capture all donors but includes those who contributed more than $500 and whose first names, last names and home cities were reported the same way by all the campaigns. (Donor addresses, used by campaigns with more comprehensive databases, are prohibited from disclosure under Texas law.) Both campaigns note somewhat higher donation totals from Hutchison exes but do not quibble with the Tribune's overall analysis. 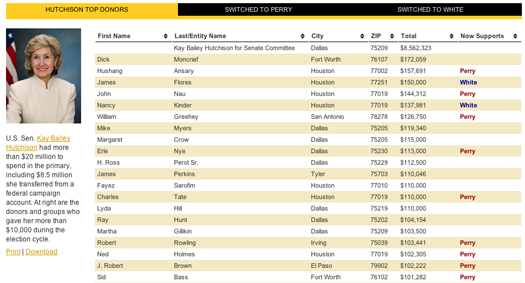 "This bird lit with Gov. Perry," says Austin lawyer Pete Winstead, founder of the law firm that bears his name. Winstead supported Hutchison partly out of longstanding friendship and partly because he thought the governor's office needed a fresh perspective — Perry's in his 10th year, looking for four more. But when it came down to Perry or White, he chose Perry. "I view the primary as an intramural squabble, but in the long run, I think the Republican Party is better for Texas," he says.

Winstead, who co-chaired the Hutchison campaign's Central Texas operations, met with White but says he called longtime Perry backer James Huffines the day after the primary, congratulated him and "told him I was ready to go to work for Gov. Perry."

That kept him out of the way of the "calling and head-knocking and whatever" that came to others on the Hutchison list from both sides.

Wales Madden Jr., an Amarillo lawyer and former University of Texas regent, gave $10,000 to Hutchison during the primary, serving on her leadership team. He's now an "enthusiastic supporter" of White's, having contributed $5,000 to the Democrat in April — even though he typically backs Republicans. Madden says he first encountered White in the 1990s, when he was served as an undersecretary at the U.S. Department of Energy working on issues related to the Pantex Ordnance Plant in Amarillo. Madden considers White a friend and admired his work as Houston mayor.

"I don't believe that Rick Perry is a bad guy at all," Madden says. "He suffers, though, under the prospect of being the governor for 14 years. I think that's too long. I believe that Bill White will bring a Texas Democrat approach to solving problems, like illegal immigration and applying a business notion to running the state. I'm voting Republican except for governor."

The two campaigns are still in the hunt for Hutchison loyalists — first and foremost, they want their money — and for the appearance of momentum their support might bring. For Perry, it's about Republicans coming home after a primary fight; for White, it's about conservatives getting their fill of an incumbent and pushing for a change at the top of state government.

"We're proud to have to have the support of Hutchison's donors, just as we would be for any other Texan," says Perry campaign spokeswoman Catherine Frazier. "We're very excited about an increase in contributors with the success we've had this election year."

"Bill is very proud to welcome Sen. Hutchison's supporters to the team," says Frazier's counterpart at the White campaign, Katy Bacon. "As Houston's mayor, he earned support from people across the political spectrum. You see the same trend in the campaign for governor."

The lists of movers make for interesting reading. Robert Rowling, the billionaire Dallas investor whose holdings include the Omni hotel chain, left Team Perry amid some noise last year, quitting coveted appointments to University of Texas Board of Regents and UTIMCO — which manages the assets of UT and Texas A&M University — and throwing in with Hutchison. He's back with Perry. So is Houston beer distributor John Nau III, who was the challenger's statewide finance chairman in the primary season. But his wife, Barbara Nau, is one of White's contributors.

Lanham Lyne — the former Wichita Falls mayor who's now the Republican nominee for the Texas House in District 69 — was with Hutchison and is now with Perry. Tom Dunning, a businessman and former candidate for Dallas mayor who gives to candidates in both parties, was with Hutchison and is now with White. Real estate developer Ross Perot Jr. returned to the Perry fold after supporting Hutchison in the primary. Former Gov. Bill Clements also came home to Perry, as did Texas Transportation Commissioner Ned Holmes of Houston and a rash of Dallasites and Hutchison neighbors like investor Louis Beecherl, banker Gerald Ford, investors Harlan Crow and Al Hill, and Dallas Cowboys quarterback turned real estate magnate Roger Staubach.

Perry's former foes include three who kissed and made up with $100,000 contributions: Hushang Ansary, who pocketed a fortune in the oil equipment business; retired investor and current UTIMCO board member Charles Tate of Houston; and oilman/investor Sid Bass of Fort Worth. Three more — Nau, Ford and Chief Oil & Gas founder Trevor Rees-Jones of Dallas — each contributed $50,000 after the primary.

A mess of Houston area folks who were with Hutchison joined with White. They include James Flores, the chairman, president and CEO of Plains Production and Exploration; philanthropist and George W. Bush pioneer Nancy Kinder; real estate and energy investor George Mitchell; and prominent attorneys David Beck and Harry Reasoner. Kinder and Flores, along with developer Trammell Crow of Dallas and former Coca-Cola president and U.S. Energy Secretary Charles Duncan of Houston, each gave $50,000 to the Democrat. Banker and lawyer Joe Long of Austin, who contributes mostly to Republicans, gave $75,000.

In a general contest that's expected to cost at least $15 million per candidate, that's a reasonable group to prospect from.

Of course, the campaigns simply also go door to door in Hutchison's Dallas neighborhood. Right around the corner from her house are the O'Donnells, philanthropists Peter and Edith, who gave her $60,000 each. They remain uncommitted, as does one of Hutchison's neighbors who usually gives to Democrats — someone who donated $10,000 to her campaign and listed his Los Angeles address: Eagles drummer Don Henley.

You can search the lists of big donors who've made the switch (and those who haven't) in the interactive feature that goes with this story. Click on the tabs to see who gave the most to Hutchison and whether they've ended up with Perry or White.