The Texas electorate is all about Us and Them. Saying things are better in here than they are in Washington, voters think the rest of the country should look to the state as a model of how things ought to work, according to a new University of Texas/Texas Tribune poll.

Pollster Daron Shaw, a professor of government at UT, says the survey shows distance making the hearts growing more hostile. "This gets to the idea that 'we're doing okay, Texas is alright,' he says. "I'm willing to see the economy is a huge issue, because I see it on the nightly news. The closer stuff is based on personal observation and so on.

"Also, as an empirical matter, Texas is doing better," he says. The high ranking of immigration continues to floor him, but Shaw says that's remained a major issue throughout the economic downturn. You'd think the economy would leap into the limelight, but the border security/immigration issue hangs in there."

That makes immigration a powerful political item for campaigns willing to use it. "The power of immigration is an issue," Shaw says. "If you're a Republican, you look at the data, and I don't understand why you wouldn't go hard line on that."

Economic issues clearly have voters' attention. The federal budget and leadership issues, in particular, say something about the current atmosphere. "The crystallization of the deficit as the issue that exemplifies Republican dissatisfaction with Obama and the Democratic Congress," Shaw says. The leadership issue is basically a code for the same sentiment, he says. 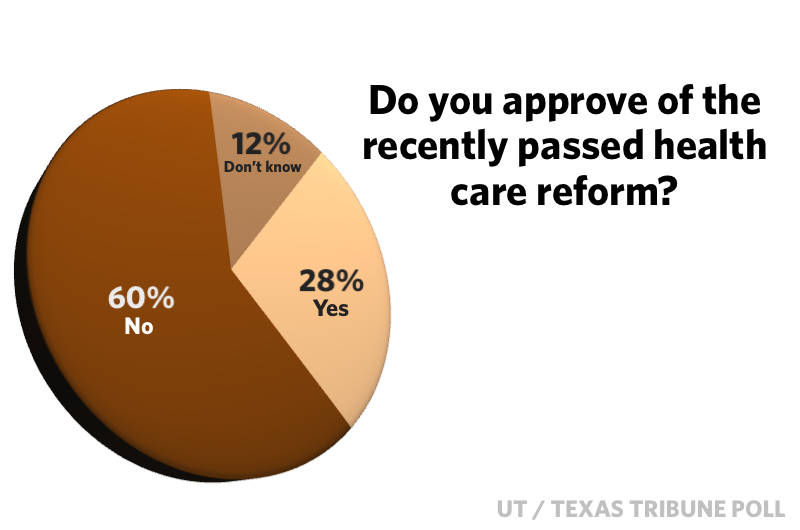 Texans overwhelmingly don't like the national health care reform legislation passed earlier this year, with 60 percent against it and 28 percent for it. They think they know something about it, too: 43 percent say they have a good understanding of all of the package's basic elements, and another 43 percent claim a good understanding of "a few" of its basic elements. Given those findings, it's no surprise that 57 percent support Attorney General Greg Abbott's participation in a multi-state lawsuit against the reforms; 29 percent oppose it.

While they're at it, 58 percent of voters say Texas government is a good model for other states to follow; 30 percent disagree.

Shaw points out that people aren't saying Texas is doing well. It's all in the comparison. "It's pretty good news, but we could overrate it," he says. "It's not like they think Texas is going great —  it's just that in comparative terms, it looks better."

The Texans we surveyed would like to see more competition in elections, but they don't feel strongly about who draws the political maps. Forty-two percent say the power of redistricting should be stripped from the Legislature and given over to an independent appointed commission, but 28 percent oppose that, and 30 percent have no opinion. 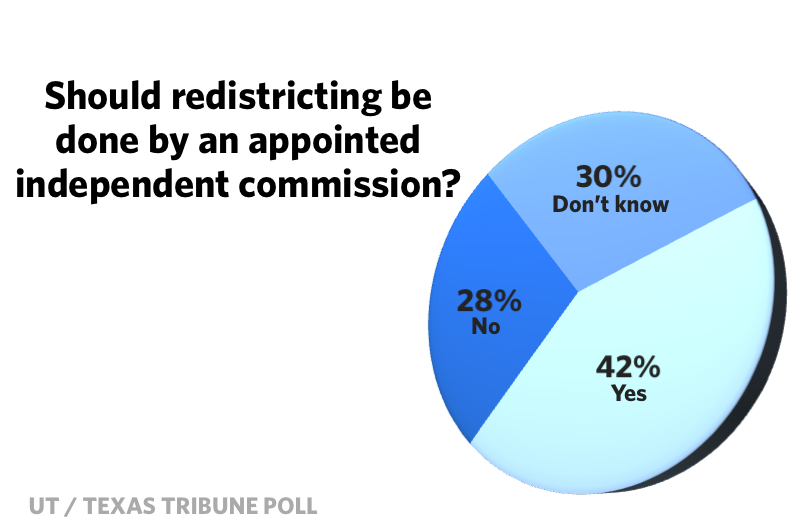 Putting together political maps that keep "distinct neighborhoods, towns, and cities" from being split into different districts ranks as important for 65 percent of the registered voters in the survey. They give a lower rank to communities of interest composed of racial and ethnic groups, with only 30 percent saying the mappers should maximize the number of political districts where African-Americans and Hispanics are in the majority. Another 44 percent rank that as unimportant.

Ask about how redistricting works for the parties and the candidates, 60 percent say the maps should be politically competitive rather than drawn to favor one party over another; only 17 percent rank that as unimportant.

A narrow majority says abortion should be restricted — either never allowed (15 percent) or allowed only in cases of rape or incest or when the mother's life is in danger (37 percent). A small group (13 percent) would allow abortion "only after the need for the abortion has been clearly established," and a large group (32 percent) says "a woman should always be able to obtain an abortion as a matter of personal choice." 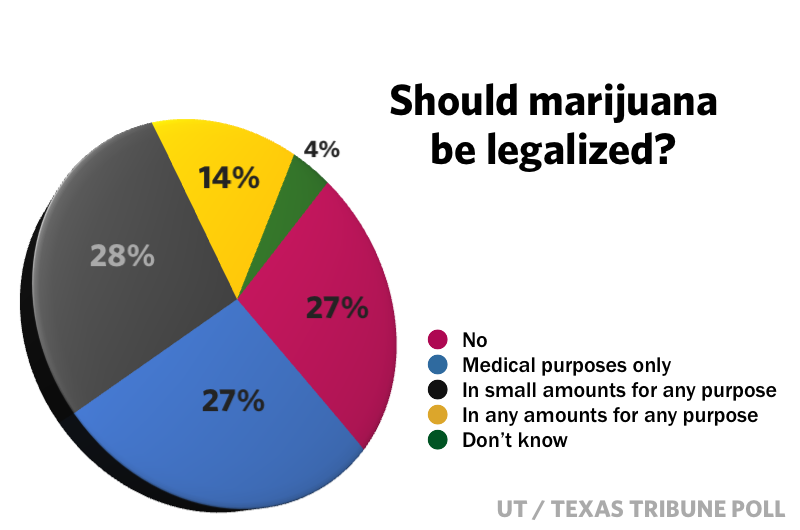 "I think there's a bunch of latent stone-heads out there," Shaw jokes. But there's something more to it. "I would couple this with the gay marriage question in some ways: Texans are not sort of lock-step social conservatives. There's a lot of subtlety out there."

In the February UT/Texas Tribune poll, most voters said they'd allow gay marriages (28 percent) or civil unions (35 percent); only 30 percent were against any kind of union.

Do voters know what's going on, generally speaking? Sort of. In a three-question, multiple-choice pop quiz, 65 percent correctly identified John Roberts as chief justice of the U.S. Supreme Court. Only 42 percent knew that the State Board of Education is an elected rather than an appointed body (33 percent believe the latter), and only 37 percent correctly chose "every other year" when asked how often the Texas Legislature meets.

This is the third University of Texas/Texas Tribune poll (the first two are here and here). The internet survey was conducted May 14-20 and has a margin of error of +/- 3.46 percent.