John Frullo can be hard to find. He's a reluctant candidate who avoids interviews, reads from index cards during debates and doesn't seem to have his heart completely in politics. And yet here he is, in a runoff with former school board president and Texas Tech Regent Mark Griffin, hoping to win the right to represent District 84 in the Texas House.

The contest shares one important characteristic with the adjacent race in HD-83: It pits inside-the-tent Lubbock Republicans against a coalition of social and libertarian conservatives who are distinctly unhappy with government in Washington and Texas. In that frame, Frullo's the insurgent and Griffin represents the establishment.

"I feel a little like Don King," jokes Chris Winn, chairman of Lubbock County's GOP, but he downplays the ideological splits. "In Lubbock, what you have are people who espouse limited government, freedom and liberty. Those values have been the cornerstone of the Republican Party back as far as Goldwater and Reagan," he says.

"What it comes down to right now are which individuals show they are experienced to work in Austin for what's best for Lubbock," Winn says. 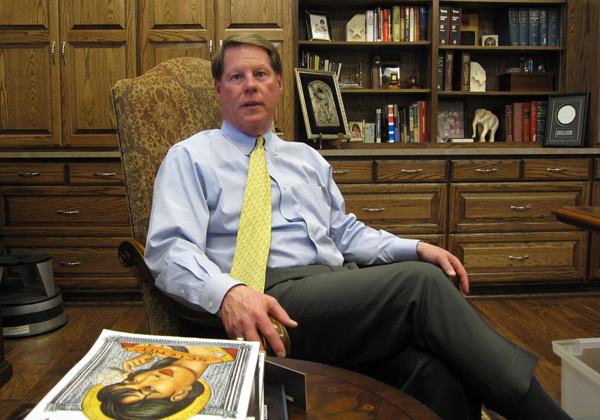 Griffin, a Lubbock native who left to play baseball and go to college at the University of Texas and then came back, runs a large family business, was chairman of the Lubbock County GOP from 1986-90, served on the school board for 14 years and was on the Texas Tech Board of Regents until he supported Kay Bailey Hutchison for governor over the guy who appointed him. Rick Perry's aides let their unhappiness show, and Griffin resigned to avoid putting himself and the school through a big fight. He's hoping that's all history now, and he recently ran into Perry at an event without either of the two spilling blood. "I do think Kay would have represented Tech and this community better," Griffin says, but he bears the governor no ill will. Perry hasn't endorsed in the race. He passed up an easy opportunity to do so in a taped message to the recent Lubbock County GOP convention, but Frullo has a picture of himself and the governor posted on his website.

Frullo, who owns a small print shop in Lubbock, is new to the electoral game. He wasn't terribly anxious to talk about himself, saying he was too busy for interviews, didn't want a reporter going with him to campaign events and was too busy to even pose for a photo.

In a brief conversation, Frullo said he's talking to voters and trying to make sure his people go to the polls. He's clearly counting on the network of retiring state Rep. Carl Isett, R-Lubbock, to make him the district's next state representative.

"If Carl wasn't backing him, this wouldn't be much of a race," says a local Republican watching the contest.

Three contestants jumped into the race late last year when Isett unexpectedly announced that he would not run for another term. A Navy Reserve officer, Isett could be deployed again soon, which could force him to miss all or part of the next legislative session. He's been in the job long enough to draw retirement (he was elected in 1996, and legislators fully vest after 12 years in office). He said two weeks before the filing deadline that he wouldn't seek another two years in Austin.

Frullo, Griffin, and former Lubbock County Commissioner Ysidro Gutierrez all signed up for the chance to succeed him. Gutierrez, a former Democrat who initially filed for county office before moving to this race, didn't run much of a campaign, ending with only 8.2 percent on primary night. Griffin led, and had his early voting numbers held, he'd be the GOP's candidate (the winner of the primary will face Democrat Carol Morgan in November, though the district has been a very reliably Republican for some time). Frullo had and has Isett's blessing — and help from Isett's treasury and the incumbent's political consultant — and elbowed his way into the runoff.

Just how that happened is the subject of some controversy. Griffin got 51.3 percent of the early vote, and most of the people who voted in the district voted early. But on the day before the election, Republican voters found a snarky flyer in their mailboxes, criticizing Griffin for the deal he cut with the city of Lubbock in an eminent domain case (they wanted to put a road through his offices, and the settlement — for more than the appraised value of the property — allowed him to replace those offices with a new building to house his business). Frullo jumped into the lead on Election Day and cut Griffin's overall margin to 48.7 percent. Girffin was only 147 votes away from avoiding a runoff.

"We've got an interesting phenomenon going on here," Griffin says. "I think they're upset with Washington, and this was the only way to express it."

If you search the campaign finance records at the Texas Ethics Commission, you won't find out who paid for that mailer. It was attributed to "abetterlubbock.org" — a political action committee whose treasurer, Robert Pratt, runs a local radio talk show called "Pratt on Texas" that, among other things, has been extolling the political virtues of one John Frullo. Pratt has told reporters he didn't pay for the mailer and didn't see it before it went out. Todd Smith, a political consultant whose client list includes Isett, says that he "has never actually spoken to Robert Pratt" but that he designed and mailed the flyer. Smith won't say "until after the election" who paid him to do that (ethics laws require contributors and their political beneficiaries to report on the flow of money but don't require consultants and other contractors to disclose anything). The latest state filing from abetterlubbock.org shows only $16.70 in the PAC's accounts. No activity has been reported since the end of last year.

"I did do some mail," says Smith, who adds that he didn't think the flyer, which showed a Photoshopped Griffin kissing big bags of money, was particularly harsh. "The timing had more to do with it than anything," he says.

Some of the distance between Isett and Griffin is old stuff. Isett beat the establishment candidate, Don Richards, in 1996. One newpaper ad in that campaign touted Richards as a candidate "who can work with the leadership" of the Texas House and featured the names of several people, Griffin included, who supported him. The "leadership" reference was to Democrat Pete Laney, who was then the speaker of the House.

Gutierrez endorsed Frullo in the runoff last month, and Frullo has collected endorsements from the Texas Association of Business and Texas Right to Life, among others. He even got an endorsement from Charles Perry, a Tea Party activist who's running in the district next door and can't vote for Frullo. But his most important supporter is the incumbent. Isett ended 2009 with $119,242 in his campaign account. Because he's not running, he doesn't have to file another report until July. But his money is showing up in Frullo's reports: $32,500 through the first round, with new filings due this week from the candidates.

"The biggest issue is that you're sending a rookie down there," Griffin says. "West Texas is outnumbered. I have 14 years on the school board and four years on the Tech board. I'm conversant with the issues. We do not have the option of on-the-job training."

Griffin's been running ads for a couple of weeks; a new one this week will feature an endorsement — from state Sen. Robert Duncan, R-Lubbock, who was quiet during the primary — that could offset some of the support Isett is giving to Frullo.

In the end, like all runoffs, it's a turnout game. Frullo's minders are good at get-out-the-vote efforts, which has as much or more to do with phone calling and e-mail lists and word of mouth than with commercials on radio and television and mailers and all of that sort of thing. As Zach Brady, a Lubbock attorney who lost the March primary in the other district that includes Lubbock, puts it: "Those people will turn out if it's raining steel balls."