A major deadline for Dreamers is coming up. What's at stake for them — and what could the end of an Obama-era immigration program mean for their futures? Here's what you need to know:

• A quick primer: In 2012, the Obama administration implemented Deferred Action for Childhood Arrivals, or DACA — an immigration program aimed at protecting some undocumented immigrants who entered the U.S. as children. Those immigrants, sometimes referred to as "Dreamers," were granted safety from deportation and a renewable, two-year work permit — so long as they were younger than 16 before coming to the country or younger than 30 as of June 2012.

• But then earlier this month, under mounting pressure from Texas and other Republican states, U.S. Attorney General Jeff Sessions announced that the Trump Administration was phasing out DACA over a six-month period. Since then, President Donald Trump has teetered back and forth with conflicting statements on what life after DACA will look like. Questions now face the about 800,000 people in the country who have been a recipient of the program, including more than 124,000 in Texas.

• What would it mean for Dreamers to lose DACA? You can listen to five Texas Dreamers share their stories on how the program has shaped their lives — and what it would mean to lose it. "So I've kind of just been, you know, preparing myself mentally that this could be my last year teaching," said Karen Reyes, a 29-year-old originally from Mexico. "And I do feel a little bit of fear; I'm anxious, a little sad, a little bit betrayed. ... I'm here to stay, and I am going to fight every step of the way."

• As lawmakers in Washington debate the next step forward, all eyes are on the Oct. 5 deadline for DACA renewal applications. In the meantime, part of Trump's plan has already cut others off from legal protection. If you're receiving DACA that expires March 6 or later, you aren't able to apply to renew it. And that's on top of the federal government no longer accepting first-time DACA applications on Sept. 5. How is all of this set to impact you? We want to hear your story — tell us all about it.

• Texas Tribune CEO Evan Smith is talking with John Sharp, the Hurricane Harvey recovery czar, at The Austin Club this morning. Join us at 8 a.m., or watch a livestream here.

• President Donald Trump appointed two Texans to the U.S. 5th Circuit Court of Appeals on Thursday. If and when they're confirmed, Ross Ramsey writes, social conservatives will start seeing the fruits of a political bargain they made in 2016.

• Many students from struggling schools or who speak English as a second language don't make it far. A new state law is trying to change that.

• Hey, Texplainer — If I had prior damage to my home thanks to heavy rain, can I still file an insurance claim post-Harvey?

• There's already at least one federal lawsuit against the U.S. Army Corps of Engineers for releasing water from Houston's two reservoirs that flooded thousands of homes. But can flooded-out Houstonians win the legal battle?

• Lt. Gov. Dan Patrick wants Senate committees to look into a handful of Harvey-related topics ahead of the 2019 legislative session.

• State Sen. Joan Huffman, R-Houston, has a primary challenger in 2018: Kristin Tassin, president of the Fort Bend ISD Board of Trustees.

• And now for a montage of U.S. Rep. Beto O'Rourke letting f-bombs fly on the campaign trail.

• U.S. Rep. Gene Green says after a quarter-century in office, he's used to constituents wondering how a white person keeps getting elected in his heavily Latino district. (Associated Press)

• After Charlottesville, Confederate statues in San Antonio, Dallas and Austin have come down. But in smaller cities like Amarillo, officials are moving at a slower pace. (Texas Observer)

• For little towns scattered along the Texas coast, some worry about being forgotten amid Harvey recovery efforts. (The Austin American-Statesman $)

• Texas' two senators are split on a judicial nominee after people found out he described transgender children as part of "Satan's plan" in 2015. (The Dallas Morning News $) 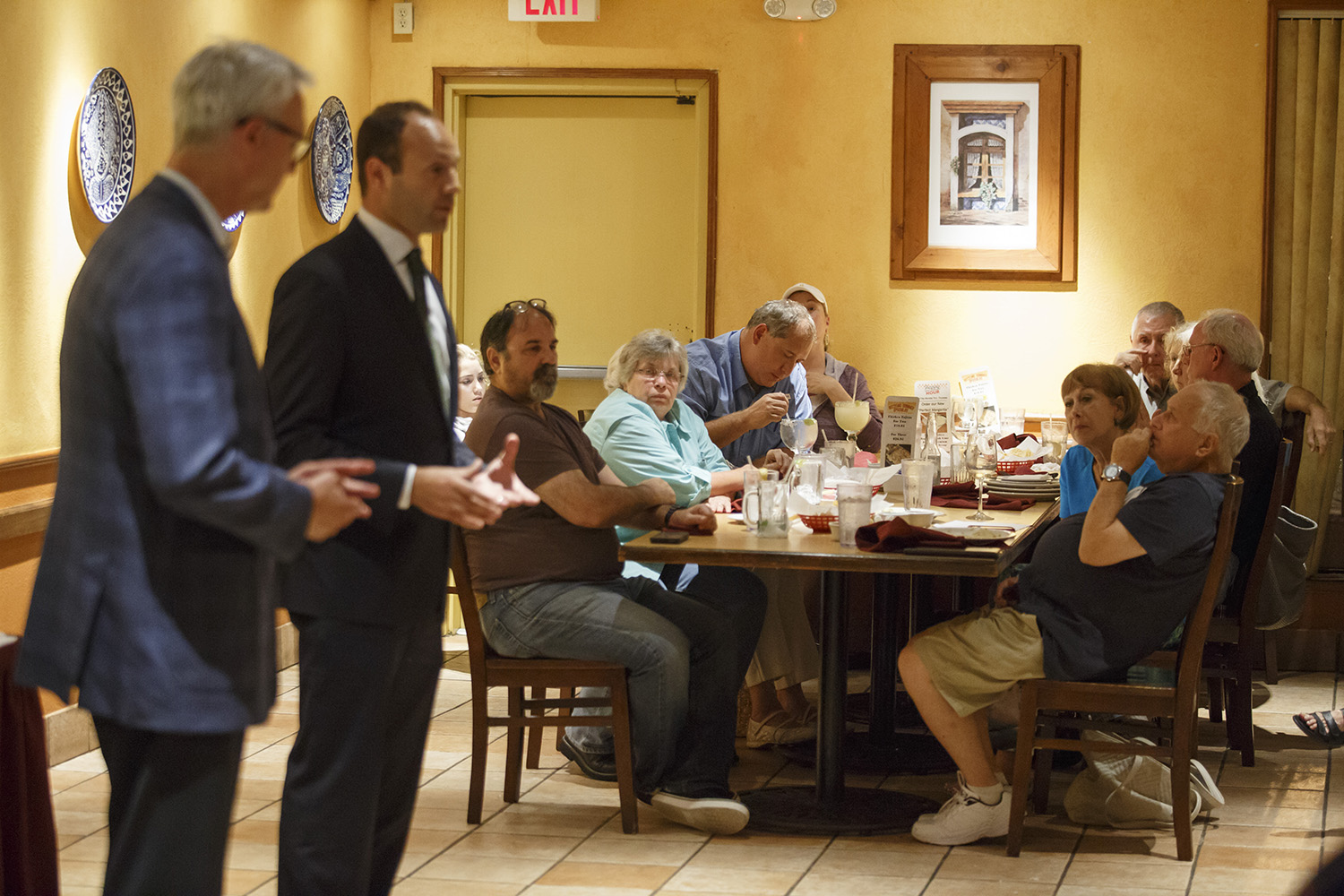 Lawyers Chris Bell (left) and Ben Rose speak to residents affected by Harvey flooding, at a restaurant in Houston on Sept. 18, 2017. Photo by Michael Stravato for The Texas Tribune. See more photos on our Instagram account.

"Once I got to college, being undocumented was no longer a fear — it was a frustration."

— Javier Huamani, an undocumented immigrant from Peru, on what life was like before becoming a DACA recipient.