How worried should the city of Houston — the fourth largest in the nation — be over a possible failure of the Addicks and Barker dams? Here's what you need to know:

• Let's start in the 1940s, when the U.S. Army Corps of Engineers designed two earthen structures in west Houston to hold floodwaters and protect the central portion of the city during major rainstorms. (For a complete run-down on how the two dams work, read this Houston Chronicle piece). In 2009, the agency — which has been long criticized for providing sparse details about the dams — classified them as "unsafe" and said there was an "urgent and compelling" need for action. The Corps expressed similar sentiments in 2009, 2010 and again in 2016, when after the Tax Day flood, the reservoir project manager said that the reservoirs "were never intended to hold pools as large or for as long as they have in recent years."

• Both dams are currently holding back billions of gallons of floodwater from Hurricane Harvey that's projected to take months to safely release — something they weren't built to do for more than short periods of time. More than 140,000 people live in the areas that were flooded from the dams, per a Houston Chronicle analysis. For a better sense of what the dams looked like in immediate Harvey aftermath, here's some aerial footage.

• The questions we're asking: How much were the dams designed to withstand, and for how long? Did the fear of dam failure serve as the leading factor in the agency's call to release an unprecedented amount of water from the reservoirs? All in all, how the Corps reacted to rising water in the reservoirs has now become the focal point of questions — and now lawsuits. Agency officials have said that some of the "controlled releases" were aimed at relieving stress on the dams, adding that its main concern was water seeping around the sides of the dam and being harder to control.

• Speaking of... A federal lawsuit has been filed against the Corps, claiming agency officials knew for years that an overflow of water behind the dams would lead to thousands of homes flooding — and just watched it happen without advising or compensating land owners. That case is pending in D.C.

• The U.S. House is expected to vote on legislation that includes a tax break for some Texans affected by Harvey. Follow Texas Tribune reporters Abby Livingston and Claire Allbright for updates.

• Did you miss this week's TribCast? We talked about highlights from our festival over the weekend, Gov. Greg Abbott's plans for the Rainy Day Fund and more — here.

• Take a look at how slow Harvey recovery is for some in southeast Texas.

• The chief oil and gas regulator in Texas was reportedly on vacation before and after Harvey. (Associated Press)

• Earthquakes are back in North Texas. (Texas Monthly)

• The curtains are rising on the GOP's tax reform plan — and Texas Congressman Kevin Brady is center stage. (The Washington Post and The Houston Chronicle $)

• Campaign watchdogs aren't thrilled at the prospect of Trey Trainor, an Austin-based lawyer, securing a post at the Federal Election Commission. (The Dallas Morning News $) 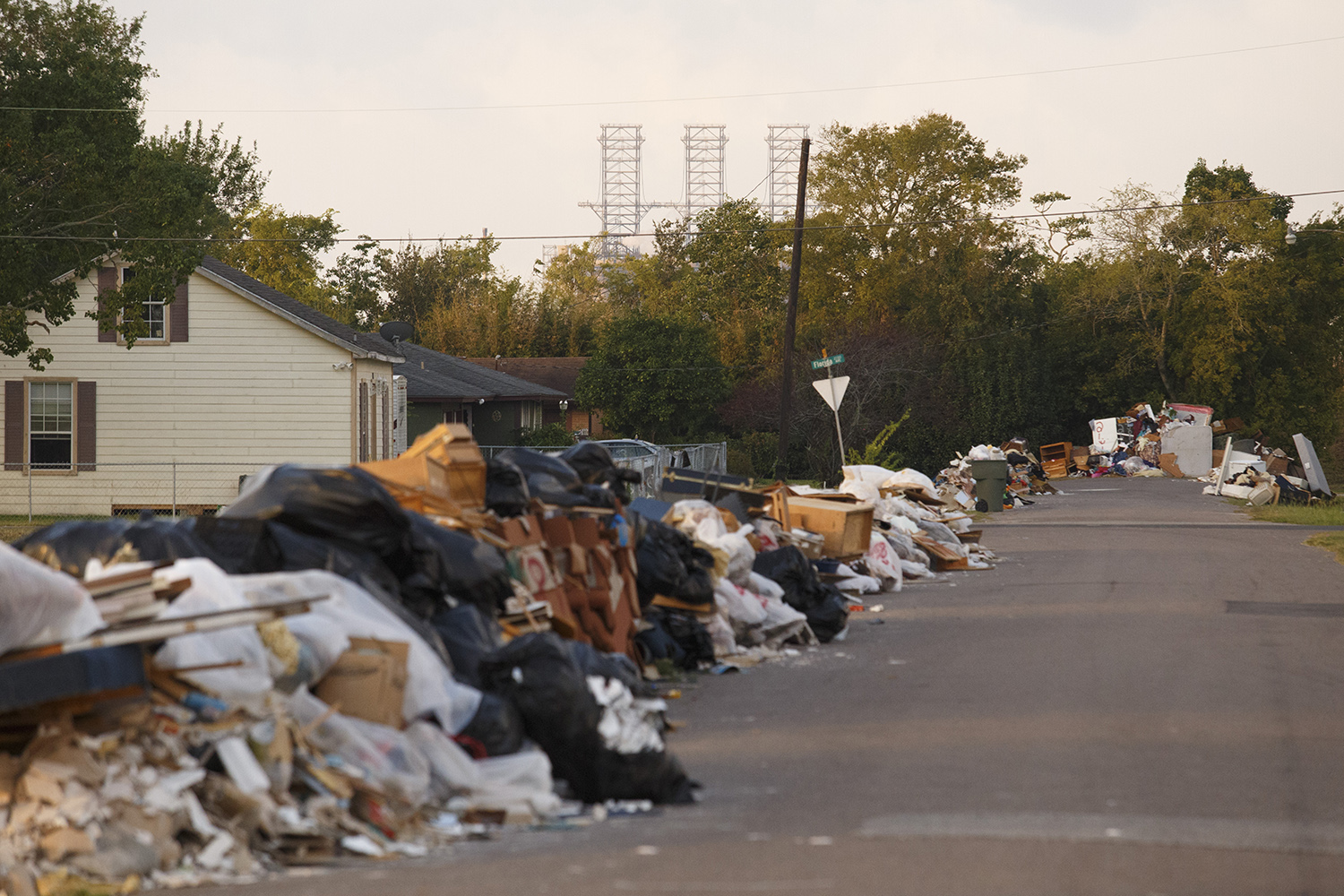 Flood-damaged debris piled outside of homes in Port Arthur, a city that saw 47 inches of rain during Harvey. Photo by Michael Stravato for The Texas Tribune. See more photos on our Instagram account.

"This is a total disaster."

— Carol Sue Smith, a Rose City resident whose property was damaged during Harvey.