Texas is facing off with its opponents in court again — this time, it's over the state's new immigration enforcement law. Here's what you need to know:

• Today's legal skirmish is in New Orleans, where the U.S. 5th Circuit Court of Appeals is set to hear oral arguments on the law, known as Senate Bill 4. What's at play is how well the state's attorneys can argue before a three-judge panel that the measure is both essential to public safety and that it should not have been partially blocked just before it was set to become law.

• On that note, flashback to last month, when U.S. District Judge Orlando Garcia halted key portions of the measure two days before the law was set to go into effect. Texas Attorney General Ken Paxton was quick to ask the 5th Circuit to lift those blocks as the case winds its way through the legal process.

• Nobody knows when a ruling on the state's request to let SB 4 go into full effect will happen. But the court has already set a separate hearing in November for the appellate court to hear arguments on the injunction itself and on whether the case should proceed on its merits. Put simply, it's going to be a while before this is all resolved.

• While SB 4 plays out in court, federal officials are sending mixed signals about the future of an Obama-era program that has provided relief from deportation to hundreds of thousands of young undocumented immigrants. An Oct. 5 deadline is coming around the corner, and if the Trump administration presses the gas pedal on phasing out Deferred Action for Childhood Arrivals (better known by its acronym, DACA), that will be an important day for recipients of the program, or "Dreamers." In any case, we want to hear from you — tell us your story here.

• The Texas Tribune Festival starts today! Join us this afternoon through Sunday at the University of Texas at Austin. There is still time to register, or volunteer and attend for free. We'll be hosting discussions featuring experts from all over on topics such as the Trump presidency, public and higher education, and health care and the economy. If you can't make it out, we'll be livestreaming various panels all weekend on our Facebook page and site.

• Their meeting on Tuesday was only the beginning. Now, the Texas railroad commissioner wants Attorney General Paxton to wade into the board chair's actions.

• Are Texans in Congress ready to retire ahead of the 2018 elections? We asked them so you didn't have to.

• U.S. Rep. Beto O'Rourke, a Democrat from El Paso running for a slot in the U.S. Senate, isn't worried that his party doesn't have a candidate for governor yet. (The Dallas Morning News $)

• Is your city taking down its Confederate statue? Send it to The Woodlands. (The Houston Chronicle $)

• From Ross Ramsey: There's a chance that the X-factor in next year's elections will be Hurricane Harvey — not President Trump.

• Housing officials in Houston are drawing ire for evicting elderly residents because of flooding from Harvey.

• A motorcade carrying Texas Agriculture Commissioner Sid Miller, USDA Secretary Sonny Perdue and U.S. Rep. Mike Conaway, along with other staffers, was in a car wreck while touring Harvey damage to agricultural production on Thursday.

• Multiple prisons in Texas are being shaken up amid Harvey and a federal lawsuit.

• Texas Monthly gives you an oral history of Harvey.

• An elementary school in Waco is raising money to help another school in Houston with the same name after it was damaged by the storm. (Waco Tribune-Herald)

• Recovery is no guarantee in the smaller towns affected by Harvey. (The Austin American-Statesman $)

• U.S. Rep. Jeb Hensarling to repeat flooding victims: "At some point, God's telling you to move." (The Dallas Morning News $) 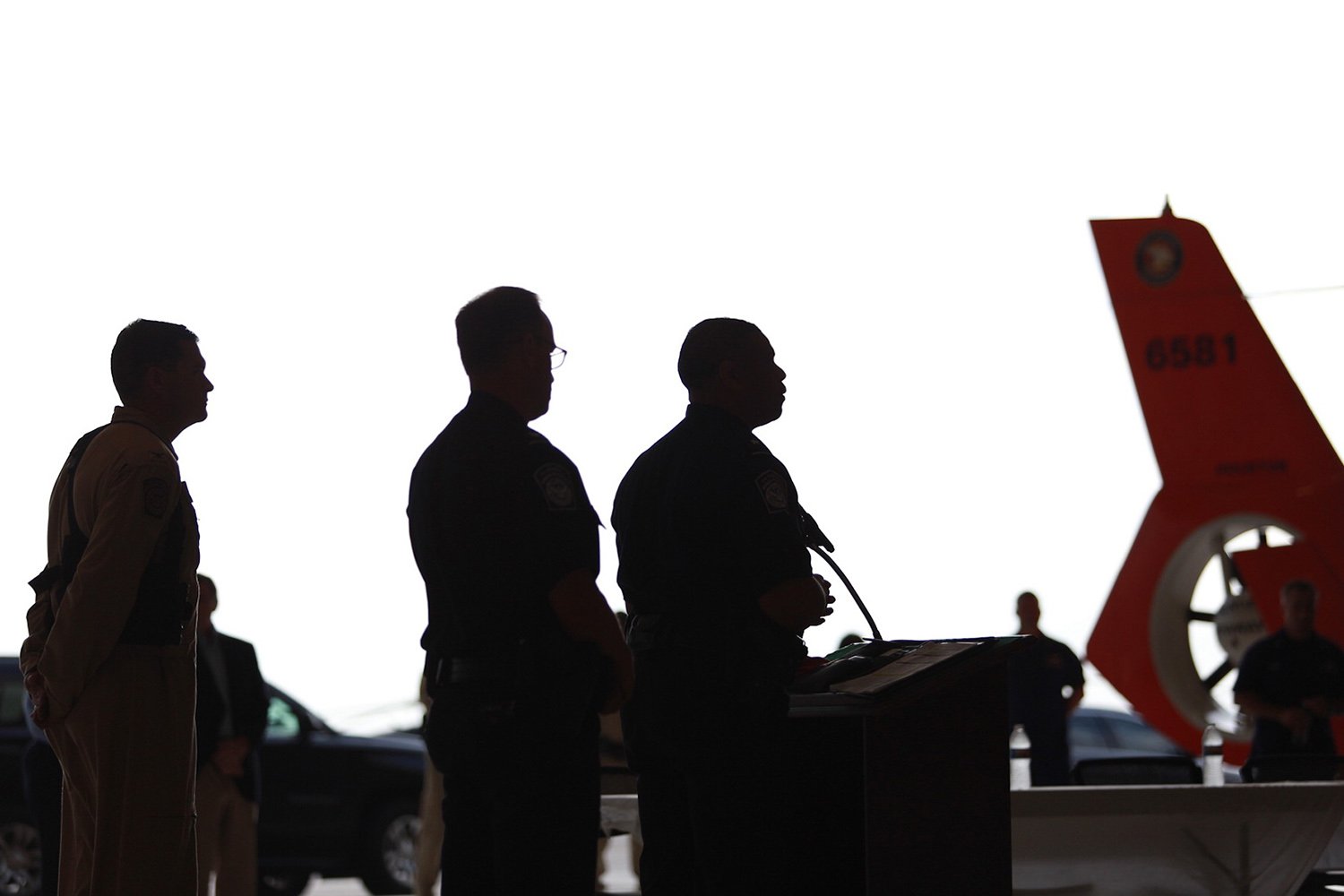 Members of Texas' congressional delegation wait to board a helicopter at the Coast Guard Air Station southeast of Houston to survey damage from Hurricane Harvey on Sept. 21, 2017. Photo by Pu Ying Huang for The Texas Tribune. See more photos on our Instagram account.

"I’m actually shocked that any seemingly ethical prosecutor would file a piece of garbage like that."